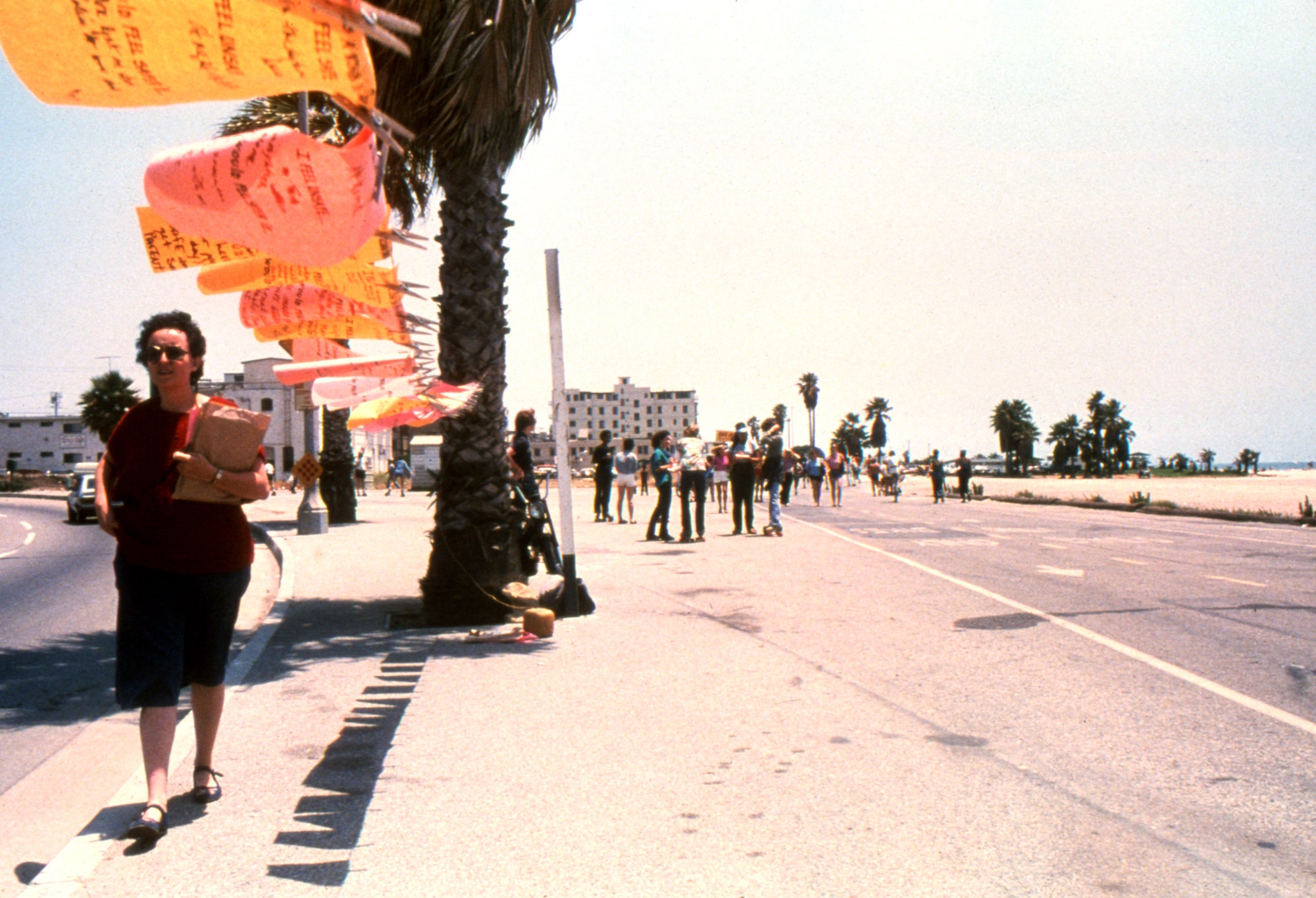 In 1978 — three years after the United Nation’s first International Women’s Year congress was held in Mexico City — Mónica Mayer took to the streets of the capital with a stack of pink sheets of paper, asking women to write about their experiences of sexual harassment. It was the first iteration of * (5) (The Clothesline Project)*, an ephemeral art project, which, four decades — and now, thousands of #MeToo stories — later, is still going strong.

Not long after this installation, Mayer traveled to Los Angeles, where she studied at the Woman’s Building — a hotbed for feminist artists and thinkers spearheaded by Judy Chicago, among others. Returning to her native Mexico in 1983 with fresh perspectives on art and social engagement, Mayer cofounded the country’s first feminist art collective, Polvo de Gallina Negra (which translates to”Black Hen Powder,” titled after the group’s self-prescribed remedy against the “evil eye”), with fellow artist Maris Bustamante.

Until the early 1990s, the duo indulged in subversive interventions and participatory performances at the intersection of art, media, and the social realm. For their most ambitious, long-term work, *¡MADRES!*, the artists used their own pregnancies as an art project — a way of integrating life and art while commenting on the condition of women in our patriarchal society and male-dominated art world. They even turned a celebrity anchorman into a “mother for a day” on (6), persuading him to don an apron and a prop pregnant-belly.

As Mayer’s work is currently being celebrated at the (7) in Los Angeles and the (1) in Washington, D.C., I sat down with a pioneer of Mexico’s feminist-art movement to talk about the politics of visibility, childbirth as art, and why men, too, need to speak out against harassment.

__Benoît Loiseau:__ You studied art in Mexico City in the early 1970s, at a time when few female artists were discussed within the establishment. What was that like?

__Mónica Mayer:__ No women artists were ever mentioned in my art-history classes; there was a complete invisibility of their work. But it was also a time when the feminist movement became more present, and as women we were very much aware of it. Not just myself, but other artists like Magali Lara, Jesusa Rodríguez — we all knew each other and were talking to each other. On the one hand, it was about confronting this invisibility, and on the other, it was about finding each other and proposing different kinds of works together.

__BL:__ Then a few years later, in the late 1970s, you went to LA to study at the Woman’s Building, the nonprofit arts and education center, sometimes referred to as a feminist Mecca. What impact did that have on you and your conception of feminist art?

__MM:__ It was clear to me from the beginning that feminist art was anything that feminist artists wanted it to be. We were in a process of opening up, not closing the definition of feminist art. I came from the generation of *los grupos* here in Mexico, a generation interested in political art and collective work. So working with Suzanne Lacy and Leslie Labowitz — of all the different possibilities of feminist art in LA — was what I was most interested in, because it was public art. They were doing work for television, for the streets, for demonstrations … It was like redefining what art was. And that was a lot of fun, but it was also a very intense moment. I think it was one of those few moments — probably like the Russian revolution, or the Mexican revolution — when art had a social meaning beyond its realm. An exhibition like Judy Chicago’s *The Dinner Party* at the San Francisco Museum of Modern Art in 1979 was visited by nearly a hundred thousand people. It meant something for a lot of people.

__BL:__ And it’s around that time that you started the participative project El Tendedero. You asked women on the street to write down what they disliked the most about living in the city, specifically their stories of sexual harassment. You then hung and exhibited the papers on a clothesline at the Museo de Arte Moderno in Mexico City.

__MM:__ For me, the work is not about the clothesline, but the part where I go out on the street and speak to these women and ask things like:

*”Hey, have you ever been harassed?”*

*”Has anybody ever touched your ass in the metro?”*

So, it was about making it visible — even for these women — that they were being harassed. I’ve always said that it wasn’t a sociological study but an art piece. It doesn’t have to do with truth. My act was to influence their thinking.

At the time, we were just beginning to talk about harassment. Nothing like what you see today, with the hashtag #MeToo.

__BL:__ Which is almost like a contemporary, digital variant of your project.

__MM:__ You work with the tools you have in a certain moment and context. And the context right now is completely different. The ambition then was to raise awareness about harassment because women weren’t aware of it, nor were men.

Mexico City is one thing, but if you go to Tuxtla Gutiérrez , for instance, it’s another story. In most communities, we don’t talk about sexual harassment. We’re starting to talk about it on the Internet, in large cities, but in many places, we still don’t talk about it.

__BL:__ Looking back at the first iteration of this project, 40 years ago, and the context now, where do you think we’re headed in terms of talking about sexual harassment?

__MM:__ Part of the conversation that I’ve been witnessing and that I’m interested in is for men to also talk about when they have harassed. I would like the conversation not to be guilt-ridden but educational. More like: “Yes, I was brought up in a racist, classist, sexist society, and I try my darn best.” After 40 years as a feminist, I still sometimes find myself in attitudes that are not feminist, and assuming things about myself, as a woman. So I think it’s a process — a slow and painful process of growth. And I worry at times that we take it into a confrontational rather than an educational direction.

__BL:__ After you returned from LA in the early 1980s, you started what is considered the first feminist art collective in Mexico, Polvo de Gallina Negra, with Maris Bustamante. What was the ambition of the project?

__MM:__ I was always interested in collective work. Maris and I met at the *Salón 77–78* exhibition . We worked together for about ten years, starting with a project called *Las Mujeres Artistas o Se Solicita Esposa (Women Artists or Wife Wanted)*, which was a series of performative talks in the state of Mexico. But our most ambitious project was the one on motherhood, *¡MADRES!*. We presented ourselves as the only group who believed in childbirth as art and claimed that we got pregnant in order to carry out field investigations before realizing the project. Naturally, we counted on the help of our husbands, who, as artists, perfectly understood our intentions. Then, as good feminists, we had daughters! The whole thing was a mixture of life and art.

__BL:__ That’s interesting, because there’s still such stigma in the art world about what it means to have children as a female artist — it’s often assumed that it means interrupting your career or even making your work irrelevant.

__MM:__ It was a response to that, and also a response to suddenly being mothers. And things do change. Basic things like you become invisible, and your children become visible. Nobody ever asks about your work again. And the kind of prejudice that you might find — you’re not taken seriously. And on top of that, not having any time! We were very much involved in analyzing this through our art and playing with it.

__BL:__ Along with the exhibition * (7)* at the Hammer Museum (part of *Pacific Standard Time: LA/LA*) — which features both your work and Polvo de Gallina Negra’s — you’ll be running * (1)* at the National Museum of Women in the Arts in Washington, D.C. Can you tell me about re-creating the project for this exhibition?

__MM:__ I worked there for the first time last September and gave a workshop with women from (2), which works with migrants, and the (3), which works with women who suffered domestic violence. Together with a group of artists and activists, we defined the questions for this particular iteration of *El Tendedero*. And it was really interesting to me, because, for example, I had never fully conceived how women migrants would never denounce harassment — firstly because they don’t have the time or money, secondly because it would most likely be considered treason within their own community, and thirdly because most of them are illegal migrants, so they won’t be supported by the legal system. Nobody can defend them.

|||
*El Tendedero*. Photo by Yuruen Lerma. Courtesy of the National Museum of Women in the Arts.
|||

__BL:__ What do you think a show like *Radical Women* can bring to the conversation?

__MM:__ I hope there will be more interest because of the context of what is going on right now politically in the United States. Latin American art, except for a very small group of artists, is usually ignored. We’re not part of the conversation. I hope it will bring more interest and show that the exhibition is just the tip of the iceberg. I hope a lot of people in Latin America will also be indignant and say: “But you left this artist out, and that one, and that one!”

*Benoît Loiseau is an arts writer based in London and Mexico City. His collection of short stories* We Can’t Make You Younger *is available via (4). You can follow him on Twitter and Instagram at @benoitploiseau.*