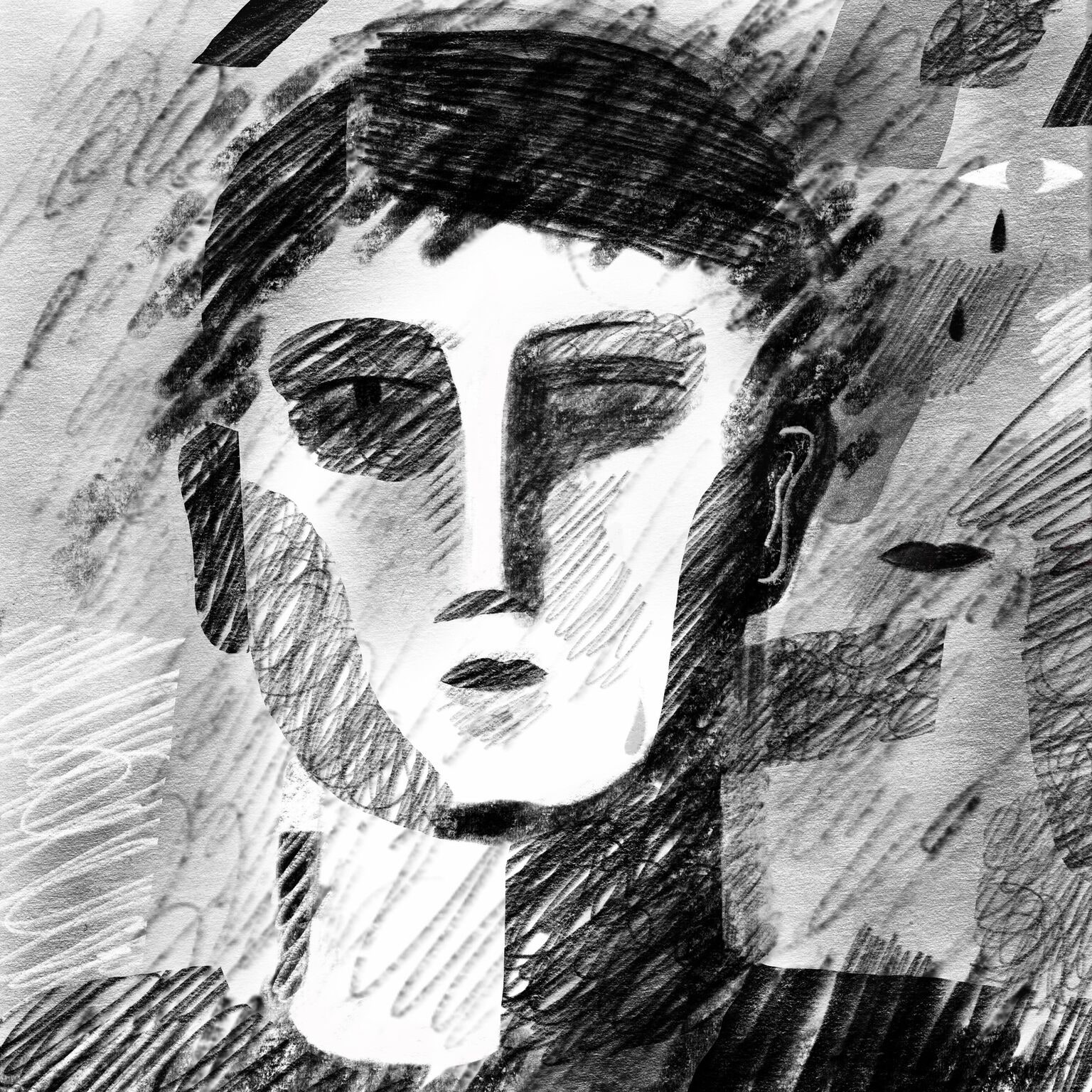 What I didn’t know about grief is that it’s so much like rage. In the days after my little brother Mark’s death, I developed an elaborate fantasy that some guy on the street would say something like “Smile, baby” and I’d whip around to seethingly ask, “What did you just say?” He’d repeat it, and then I’d tear into him: “My brother just committed suicide, so thanks, but no thanks, I’m not gonna smile today, and if I ever hear of you saying that to another woman, I will track you down and carve a smile into your face.” Given the chance, I honestly think I would have offered this deranged sermon, but as soon as Mark died, men stopped bothering me on the street.

I want everyone in the world to know Mark is dead. I want the whole city of New York to go into mourning; I want sirens and wailing, people sobbing for days on end, gigantic memorials erected, and every big brain directed toward understanding what took him. Without that, I’m willing to trade a bunch of other people’s siblings for Mark. I cultivate a list of brothers I know or know of, ever ready for the swap.

“Please be kind to each other,” Mark wrote once in a letter to us all, but that’s hard to do. I do not feel big loving feelings for humanity. Instead I feel malicious, mean. I’m mad at the doctors, mad at myself, mad at Mark (sometimes), and mad at the strangers who laugh on the subway as if Mark isn’t dead.

***
For days after Mark’s death, I wandered around the house in his clothes, pawed repeatedly through his keepsakes, and slept in his bed. *If you didn’t want me to be going through all your stuff, then you shouldn’t have died,* I think defensively before keeling over into a pile of his shirts, weeping.

I didn’t realize I was looking for a note just for me until, reaching into the pocket of a hardly worn jacket and feeling paper, my breath caught. It wasn’t a note from Mark, but it was the flyer from the fashion show I watched him walk in. *Does this count?* I wondered, but I wanted more.

A few weeks later, lying with his childhood stuffed bear and trying to sleep, I noticed it had a hole by the seam. I felt fluttery, delighted. *Finally,* I thought to myself. But there was just stuffing inside, no note hidden with the prescience that I’d be the one to keep Beary close.

Without him here, I treasure the things that speak to the humble and tragic hope that his life would go on — the tin of lip balm with a thumbprint in the middle, a half-used MetroCard, the Mallomars in the cabinet next to the tea he’d special-ordered. They’re painful but precious reminders of his aliveness, even if he wouldn’t find them all too meaningful. I know Mark would be embarrassed by my sentimentality, would say, “Al, it’s just crap, toss it,” but I can’t.

On special occasions, I allow myself a small swipe of lip balm, careful to go around the rim and not touch the indentation made by his finger. Every so often, I take out his beach shirt, which hasn’t been washed enough since the summer he was alive to have lost its sunscreen-y smell. I hold it close to my face and breathe that in. His deodorant, I’ve found, is useless. It doesn’t smell the same when it’s not cut by skin and sweat.

I have so many things of his, but it doesn’t feel like enough. So I continue to hunt; I call the detective who took Mark away and ask for details, and I get scammed out of $300 trying to gain access to his locked phone in order to see the photos he took during his final days.

After months of this, I realize that I was functioning under the assumption that once I found everything, once I heard every story and gathered every picture, I could somehow reconstruct him. *These are the jeans you left on the floor,* I could say, handing them over. *I packed your backpack for the trip you never took,* I’d explain, before adding, *Sorry I snooped. I didn’t know that you’d come back.*

***
In the midst of tragedy, there are still things to laugh about. Like when our brother Robert mistook the bag containing Mark’s ashes for a food-warming package and opened it right up, thinking someone had dropped off a lasagna. Or when, at 2 a.m. in August, I walked across the town where we spent summers barefoot, sobbing, and pajama-clad, from my dad’s house to my mom’s, to get Mark’s stuffed bear. When I arrived, I realized the front door was locked. I checked the side door, then the back door. Both locked. So I got down on my hands and knees and shimmied through the dog door.

> I realize that I was functioning under the assumption that once I found everything, once I heard every story and gathered every picture, I could somehow reconstruct him.

I imagine Mark cackling about Robert’s discovery and rolling his eyes at my decision to go through the dog door. It would just be another conversation, over cards or Mexican food, at the kitchen table or in the car.

Six months after he died, when I saw something funny on the Internet, I thought, *I’ll just text him to see if he saw it …* then I realized that the rest of that sentence is *… before he died.* Once, opening the kitchen cabinet to make myself cereal, I saw a baby cockroach on the bottom shelf. *If that’s you fucking with me, I’ll kill you myself*.

***
I’ve heard that many people grieving experience a moment upon waking in which they don’t realize their person is dead. The mind plays a trick or offers a minute of respite. I don’t forget Mark is dead, but I forget nearly everything else. My boyfriend Greg asks if I want to go to a restaurant and I say I’ve never heard of it. (Turns out, it’s down the block and we’ve been a handful of times.) Friends gossip about people we know, but I can’t remember enough to be sure why we all despise someone, who so-and-so used to date, or what happened at a party I apparently attended. I figure I’m just distracted, until I forget how to eat sunflower seeds.

I was driving to Hudson to meet Greg for the weekend and brought along a bag of shelled seeds. I popped one in my mouth, sucked the salt off, then started chewing. I chewed and chewed until it felt like I had wood chips in my mouth. I gulped aggressively and popped a few more in. *I love sunflower seeds,* I thought. *Maybe I’m focusing too much on chewing them?* It was even harder with three. But still, I ate them, one at a time, chewing and driving.

When I saw Greg, I asked, “Do you ever find sunflower seeds to be a little splintery? I almost couldn’t swallow them.” “No,” he said, before adding, “Were you eating the shells or something?” He was joking but could tell by the look on my face that I’d just spent two hours incorrectly eating a bag full of sunflower seeds.

At first, I figured my brain was working overtime to dredge up and preserve all memories of Mark. But as it got worse, I wondered if my brain had a plan of its own and was trying to ease the trauma of Mark’s death by erasing everything until Mark became undead.

> At first, I figured my brain was working overtime to dredge up and preserve all memories of Mark.

The routines of every day in a world without him wouldn’t be necessary; in fact, they were counter to the whole mission. *Where did I put my keys? When did I last eat?* “Who cares?!” My brain answered. “Don’t you want your brother back?” Restaurants and train stops in Berlin would have to go, since that’s where I spent the few months before he died.

Names and faces of college classmates weren’t necessary. Mark was depressed during those years, and so, to keep him as himself, I’d have to go back further, to childhood, a time when he was mostly happy. Unsurprisingly, I remembered those years with intense clarity. As my brain works tirelessly to bring him back through forgetting, I search endlessly for my keys, my wallet, some way to live without him.

*Alex Ronan is a writer living in Berlin, mostly. She wrote about Mark before his death for* *the Cut* *and after for* *Real Life.*