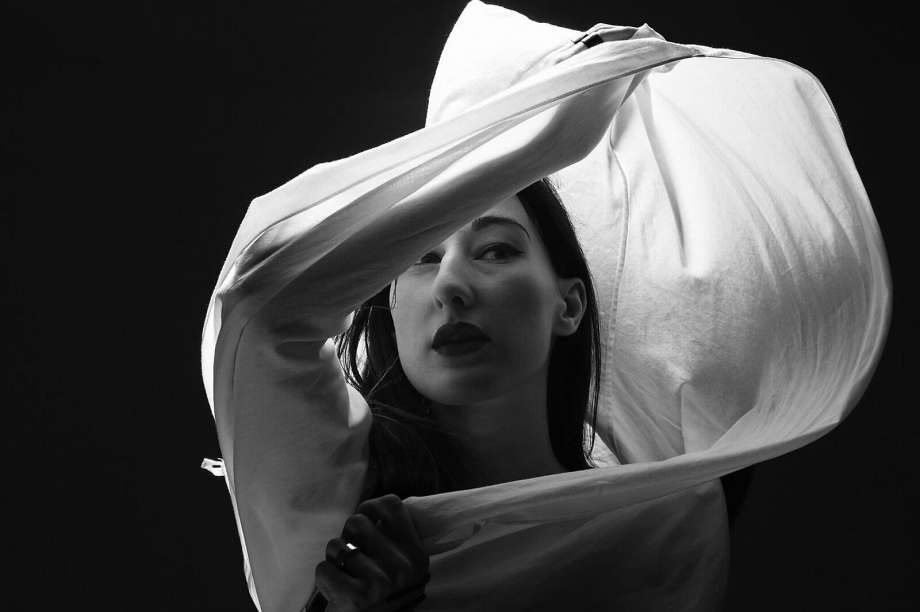 While recording _Okovi,_ her sixth album as Zola Jesus, Nika Roza Danilova was emotionally buried. There was the big-city noise of life in Seattle, which left her feeling cut off from nature; a close friend’s suicide attempt; and both physical illness and death experienced by people close to her. Because of this, she calls the recording process an exercise in letting her emotional muscles work while her analytical side felt frozen in place by depression. The ghosts of her experience feel present in the album’s DNA, from her haunted, opera-trained soprano to the dense instrumentation — equal parts electronic and orchestral.

To gain some distance from her emotional entanglements, Danilova turned to books. Given her proclivity for polysyllabic words, it comes as no surprise that the singer-songwriter is a voracious reader. But while recording her latest album, books became all the more important, as she looked for meaning and reason in her own struggle.

“Reading is a way to dip out of reality and sink into something outside yourself,” Danilova explains from her new home in Wisconsin. “When I’m really depressed, I read nonfiction. It helps get me through darker moments just knowing that there’s someone else that’s sharing the sentiments of what I’m going through.”

The books that kept Danilova company during the recording of _Okovi_ had subjects as varied as nihilistic philosophy, a brokenhearted Japanese minor, and zombies (yes, zombies). Here’s a sampling from her reading list.

When I was writing _Okovi,_ I was feeling very lost. Being an artist, you wonder what impact you’re really serving in society. When I’m feeling that sort of existential grief, I turn to philosophy or nonfiction, trying to find other people who agree with me or who will challenge my thoughts.

A lot of the themes on the record have to do with legacy and other existential themes. In Ligotti’s book, he grapples with the brick wall that we’ve reached as a species. It’s extremely nihilistic and very depressing, but in some ways, I felt very vindicated by it. These are things that I’ve been thinking for so long. I was reading it on a plane and I almost did a “Yes!” out loud when he was talking about how human evolution is almost like devolution. It’s almost like our incredible sense of self-analysis and consciousness is self-defeating. Reading that and knowing that other people have thought this as well, it felt very validating.

I found this book at Elliott Bay Book Company in Seattle. The thing that I love about it is that the protagonist is a very nihilistic, depressed young boy in a stupor. He just goes through life feeling like an empty vessel. At the same time, it’s such a dynamic story. He flips. It’s the inner journey of finding yourself and seeing the world. The world exists around you in one way, but how you perceive it can change. That’s really all that matters: your perception of life and how it can completely change your sensory experience of the world.

I really felt my own emotions mirrored in this book. For better or worse, I see how my own development or lack thereof colored how the album turned out. I always think, _Oh, man, if my perception of the world were different, would this album have been different?_ So much of making _Okovi_ was about turning my brain off and letting the stupor work for me. It’s so much about bringing the unspeakable or the unconscious outward. Sometimes you can’t let the mind get in the way.

This book is so incredibly immersive and one-of-a-kind. It’s dystopian without feeling like it. It feels folkloric and timeless. There’s a strange, ancestral feeling that I experience in reading it. For me, that’s so much of art — world-building and universes. It forces you to see things in a different perspective or from a different body. I feel like I learn so much about myself and humanity through that.

Reading this book and then watching the seven-hour-long film was deeply affecting in the core of my DNA. It’s my favorite type of fiction: magical realism, or surreal or dystopian fiction. You never really know what era it is. You never know if it’s based in reality or not. This dreamlike, folkloric environment was affecting me within my work. I was trying to create something that felt primal but at the same time surreal or larger than life. Maybe hypnagogic.

This is another one where I can’t even explain the plot because it’s so libertine. What I took away from this book is the same thing I would take away from the Marquis de Sade. It plays with morality and is so graphic and so deeply perverse. Those elements are so special and unique that it’s not even so much about the plot as it is about challenging the reader’s world. I like that. I love art that makes you challenge your principles.

This book was really important to me while I was reading it. I was going through a period where I was digging deep into the idea of morality and evil, and also serial killers and true crime. The potential for humans to exist on the fringes of society’s ethical code. _Marble Swarm_ echoed the challenge that I was facing myself in terms of societal ethics. That’s something that’s reflected on the record — this feeling of not necessarily being able to trust your neighbor or the person next to you because you can’t tell what’s going on inside of them.

In January, I drove through a blizzard to get to this cabin on a lake in northern Minnesota. That’s where my co-producer Alex DeGroot and I finished the record. There were times when he was mixing and engineering things, and I had a lot of free time. I was reading this book _The Blizzard_ . It was so perfect for that moment. It was winter and I was in northern Minnesota. Very removed. This book is about this doctor that needs to get to a town to get a vaccine to the people. They’re zombies or something. You never really know what’s wrong with them. Along the way, the story is set up where it feels like it’s rooted in the nineteenth or eighteenth century. But then, very slowly, everything you thought about the temporal context is wrong. You realize the expectation you had for the novel is flipped on its head. It becomes very anachronistic.

(6) _is a Los Angeles–based writer. Sometimes she can go several hours without a cup of tea._