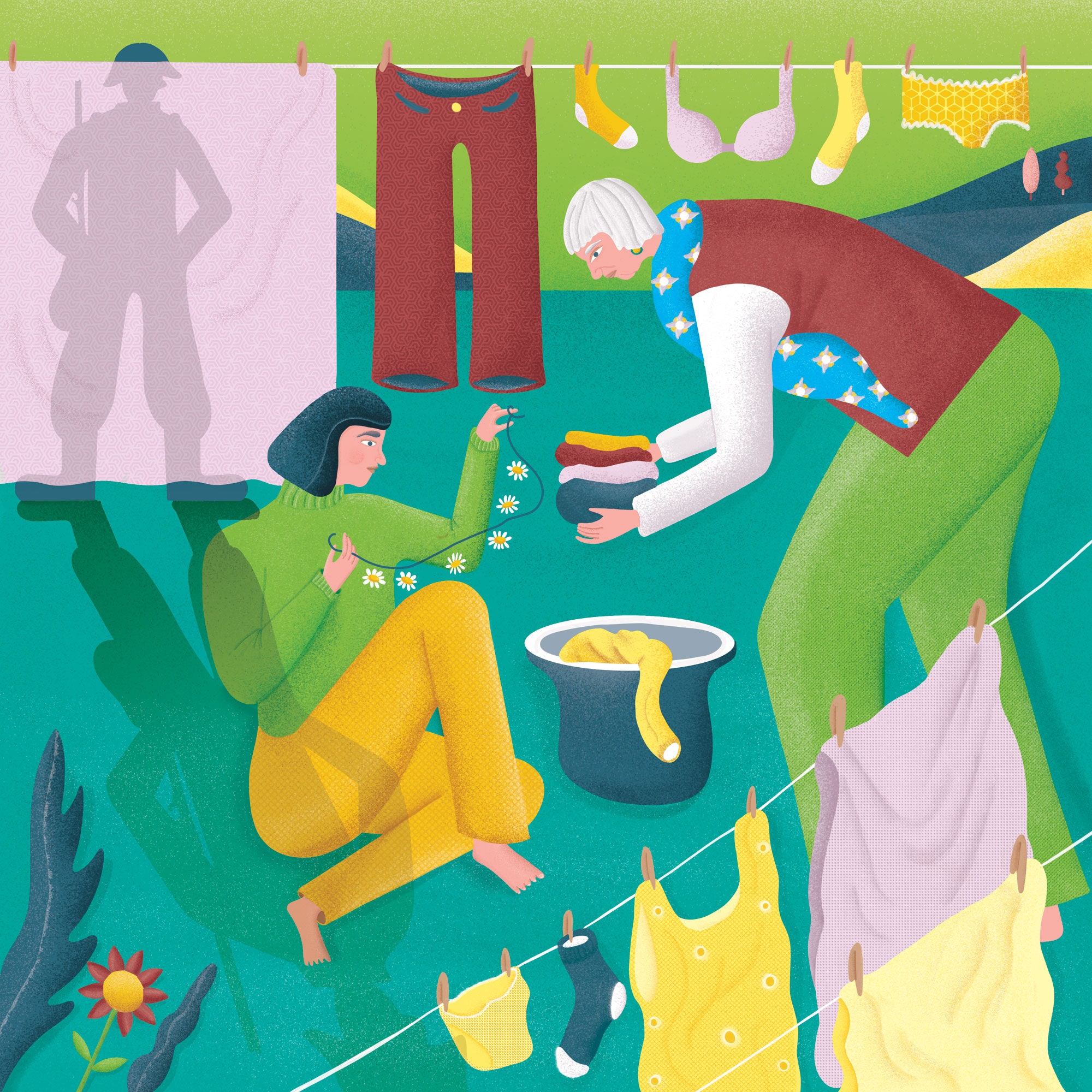 When my little sister was born, she asked my busy parents if she could keep the baby — just for a few years — at her home in Pennsylvania. One of my first memories is hitching a ride with her. I remember a strange man driving a pickup truck and flailing my limbs, refusing to get in. I remember her pushing me from behind and the stranger pulling me up. I remember the feeling in my throat from screaming, my grandmother’s calm head shaking, and her barely-English apology to the driver. “What’s wrong with you?” she asked me. “You want to get home, don’t you?”

My grandmother, Anna, was born in the Czech Republic. All she ever told me about her childhood was that she had a twin sister who had died when they were young. Beyond that, she told us nothing. What I do know is that after the Second World War, my father was born, in Nuremberg, Germany. I know that she landed in the United States with my four-year-old father in 1955. She was a young, single mother who spoke no English. No one met her on arrival; she didn’t know anyone. I know my mother’s side of the family did not like her.

She told me, constantly, that I was her favorite. Even though I’m sure she embellished her preference, she did like to talk to me. What she liked to talk about most was men. In my adolescence, my grandmother was repetitive with her advice. *If you get married, keep your own money, and always hide it, somewhere your husband would never think of.* She talked about marriage in the grimmest of terms, dissuading me from it whenever it came up. Unlike grandmothers in movies and commercials who lifted antique wedding gowns out of tissue-lined boxes in front of their girl relatives, my grandmother would wave marriage away — as though physically beating back the institution itself — and say, “Don’t worry about it.”

She never warned me off sex, though. Go ahead, have sex, she’d say, but always watch them. Always know that they want something from you, and not just your body. Something bigger. Make sure they “don’t use you up.” This advice, “Don’t let them use you up,” she always gave in English. It was one of the few phrases in her second language that she used with me, and I assume it was because “Don’t let them use you up” was exactly what she meant and better than whatever euphemistic language she’d been taught about the sentiment in her native tongue.

I asked her once, was she talking about pregnancy? Because I already knew all the ways you could prevent a pregnancy. “Of course not,” she scoffed. “You know what I mean.” And she’d tell a story, a cautionary tale about a neighbor’s daughter, or a friend’s niece, who was so beguiled by a man that she gave him everything. She let him stay with her for free, did his laundry, dressed for him, waited around for him.

This giving in — maybe it was even falling in love that she meant, but with an unworthy man — disgusted my grandmother. As a girl, I believed what she told me. When I fell in love for the first time, it tripped an alarm in my mind; this is what she was talking about. I felt confirmation of her theory in some of my early relationships and fascinations, a loss of myself, a pouring out of my time and attention onto people who didn’t love me. When I was nineteen, I dated a man well into his 30s, a relationship that makes me cringe now. I remember moments where I felt swallowed by something beyond me, moments where I was not in control of my feelings. I remember seeing myself with my grandmother’s eyes and feeling pity and, if I’m honest, also contempt. I absolutely felt what she meant. Her advice didn’t stop me from colliding with the wrong relationships, but there was some consolation, and maybe even power, in recognizing what was happening to me.

How did she know to warn me, and why was she so insistent so early on in steering me away from these sinkholes of emotion? She said it was because she understood men. “I know them,” she’d say, leaning forward as if there were another part of that sentence left unsaid, pushing her toward me. There were always oblique references to what my grandmother had done to get by before, during, and after the war. My mother’s Ukrainian, religious side of the family speculated about it a lot. How else would a woman alone survive all of that and come to America? Where did her son come from? Isn’t it strange that her family in the Czech Republic doesn’t speak to her, doesn’t visit? Isn’t it strange that she doesn’t want to visit them? What kind of shame separates a family that way?

I was told many different stories about the origin of my father, that he was the child of her first husband, that my grandmother had fled her marriage and other children, bringing nothing with her but my father in her belly. None of those stories came from him or his mother. Now they’re both dead and can’t tell me anything. I knew better than to ask her directly about my mysterious, absent grandfather, but I still came to her with questions, hoping they’d lead me somewhere. I always asked, “How did you make it on your own?” “I was smart,” she’d say. “I didn’t make any holes in my head.”

Once, when she’d been drinking, she told me that she and her friends had worked with soldiers. It was a slurry confession, and she didn’t say which soldiers, or what work she had done, or for how long. She clammed up when I mentioned it another day: Oh that, that was nothing.

It wasn’t until my grandmother was in her last two years of life that she would really let things slip. But they were disjointed things, some things that didn’t make sense, and some things that did. I’ll never know everything she did to stay alive during the war. I’ll never know how she really felt. If she’d ever been in love herself. It was a strange relationship we had — we were so close, but I knew almost nothing about her.

Now I think her secrets were another kind of survival insurance, a way to control a life in chaos. In post-Communist Europe, lustration, the practice of purging and penalizing officials and citizens who actively promoted Communist regimes, was meant to be healing. But Polish prime minister Tadeusz Mazowiecki saw things differently. He denounced lustration, arguing that it would be better to draw “a thick line” where the ugliness ended and not look back. I think my grandmother tried to do the same thing, to draw a line in order to have a place to move forward from.

I am sad for her that she never shared this part of her life with anyone but also grateful for this mysterious legacy and what it meant for me. I am grateful for her warnings, for the real truth she shared with me when so many adult women were spinning love stories or projecting romantic ideals into the minds of girls. What she told me was useful; what she told me was true. After all, survival is no joke.

*Natalka Burian is the author of* (4), *a novel, and the forthcoming A Woman’s Drink. She is also the co-owner of (5), (1), and (2), and a cofounder of (3), a nonprofit monthly fundraising reading series based in New York City and Los Angeles.*