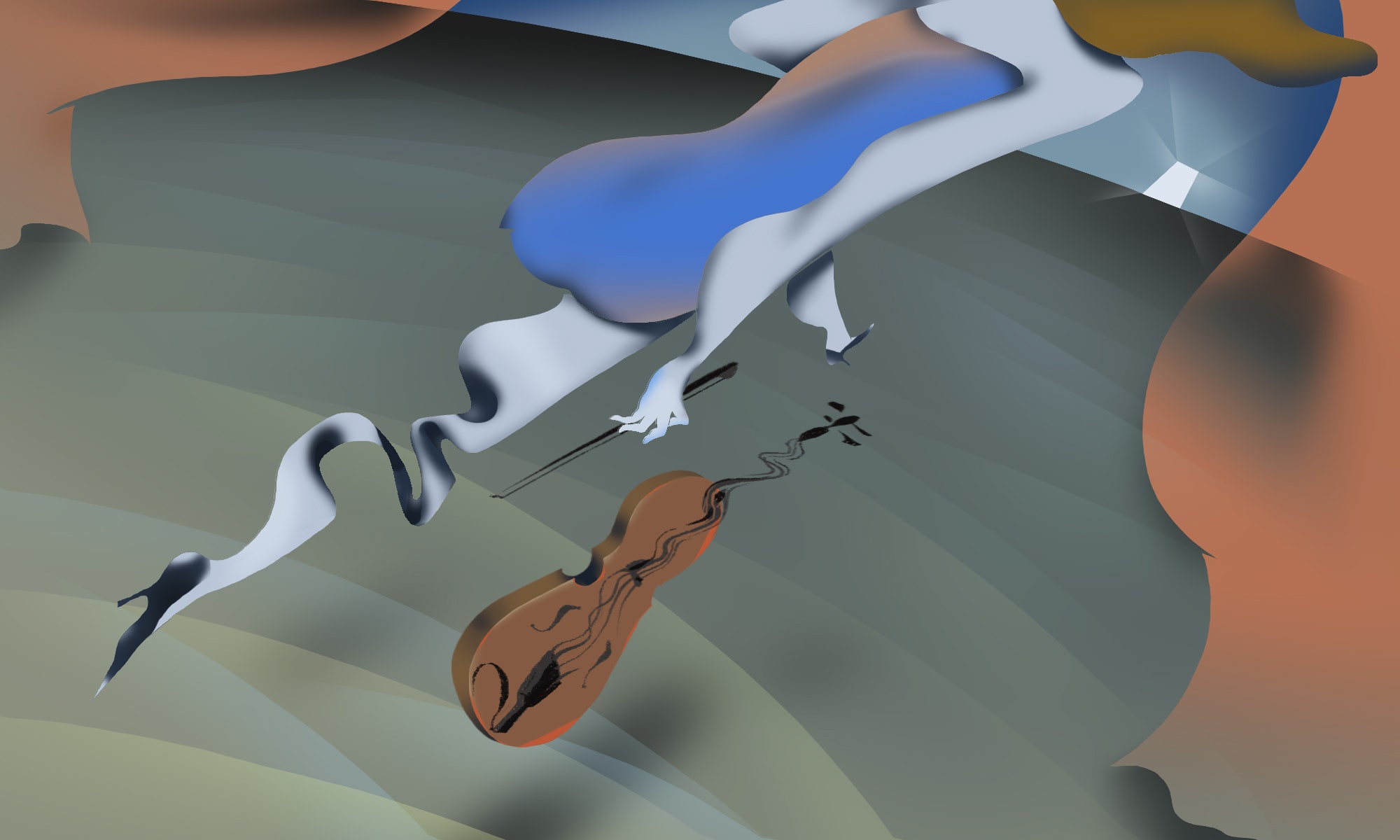 In 2002, when I was a 20-year-old college student, I was hired as a violinist for an orchestral ensemble that had sold millions of albums, appeared on national television, and performed sold-out concerts across the country. I had spent my rural-Appalachian childhood dreaming of the day that I would move to New York City to study music. But soon after arriving in my Manhattan dormitory, I realized that there were dozens of people in my freshman class alone who were more talented at the violin than I would ever be. I dropped my music major after only a few months. A few years later, when I was hired to tour the world as a violinist, no one was more surprised than I was. That is, until I found out that the job was indeed too good to be true: the microphones in front of me were never plugged in, and recordings of better violinists were blasted out to unsuspecting audiences.

When I was first hired for this job, I wasn’t particularly concerned with the consequences of musical fakery (I sometimes referred to the ensemble as “Milli Violini”). I already held multiple other jobs, struggling to pay my tuition. I was grateful for the good pay and steady work that the fake violin job provided. After I graduated from college, I continued to work for the ensemble. I planned to use the money I saved from concert touring to pay off student loans and move abroad.

But then, in the middle of a 54-city concert tour around America, something bizarre began to happen to me. Onstage one night, I felt I had to pee. But I knew I didn’t have to pee; I had already been to the bathroom several times before the concert began. I went to three doctors, thinking I had developed a urinary-tract infection. But the doctors all came to the same conclusion: everything was normal.

It hadn’t yet occurred to me that nothing has to be wrong with one’s body for one’s mind to go haywire. I didn’t know it at the time, but the feeling of having to pee was actually an atypical presentation of a panic attack.

The onstage attacks escalated, as panic attacks do: *Not only am I going to pee myself in front of a hundred people, I’m going to throw up. My dress is going to fall off; my shoes will break underneath me, crippling me. I am going to faint. I am going to throw up and faint at the same time and then choke on my own vomit.* Panic attacks are commonly described as the same flight instinct that tells humans to run from a bear. But I’ve never found that description to be accurate. What I experienced onstage was like the panic I’d feel once the bear already caught me, the panic of someone with no chance of survival, in the last moments of consciousness, when neither fight nor flight would help.

The attacks eventually invaded every area of my life until I could not ride airplanes or subways or elevators or cars or be anywhere that didn’t offer immediate access to an unoccupied bathroom. And even immediate access to a bathroom didn’t always count as a safe place. *How many times am I allowed to get up during a movie?* I wondered. *How many times during a friend’s wedding?* I parceled my life into 30-minute segments, the maximum amount of time I could convince myself that I wouldn’t pee myself, though I never actually needed to pee.

One night, while drinking a few glasses of wine, I had an epiphany: When I drank alcohol, I had to pee *less*. The disorder was indeed in my head. But I resisted seeking psychiatric help. For one thing, I did not want to talk to anyone, not even a psychiatrist, about having to pee. It was gross, and no one wants to be gross, especially not a young woman. I also had an unrelated intestinal illness; I feared that any psychiatrist who saw me would wrongly diagnose me as having some kind of Freudian obsession with my own bodily excretions.

But after six months of increasingly severe attacks, I did seek help: medications, biofeedback, cognitive therapy. Nothing worked. I continued to perform with Milli Violini, and my panic attacks worsened to the point where I sometimes ran offstage in the middle of concerts. I worried that I would be fired for this, but the people I worked with were understanding. Still, I felt guilty for causing a distraction during the performance, even as I knew the performance itself was fake.

Once I determined that what I was suffering from was indeed a panic disorder, I spent hours obsessing over how to prevent the attacks and even more hours wondering what had caused them in the first place. I felt that if I could get to the root of the fear — the initial panic — I could make them stop. And so I began to do more research on panic attacks and puzzle together why they were happening to me and why I had first experienced them as a fake violinist.

As I read through scientific journals and firsthand accounts online, I discovered that panic attacks disproportionately affect women in their twenties, which makes sense: Our twenties are when many of us realize that the success we achieved in classrooms on progressive college campuses will not necessarily carry over as we enter sexist workplaces. The Milli Violini ensemble hired young, attractive, female musicians and silenced our microphones. All our real talent (even that of musicians who, unlike me, were legitimate pros with Juilliard degrees) was muted; we were being paid for our looks.

Eventually, I found out that there is an entire subset of psychiatric disorders that revolve around the fear of losing control of one’s bodily fluids. I feel a powerful kinship with the *Atlantic* editor Scott Stossel, who (1) that he bolted out of an interview with Bill Clinton, convinced that he was moments away from vomiting on the president. After he fled, he realized that he felt perfectly fine.

But even with this knowledge about panic attacks, I still felt that there was something intrinsic to my job as a fake violinist that led to my panic disorder. In his *New Yorker* article (2) John Lahr wrote that performers who experience stage fright feel exposed, at sudden risk of losing control of the body. Lahr points out that “Break a leg” and “*Merde*” are good-luck sayings that recognize the risk of making a corporeal mess onstage. “Instead of being protected, as usual, by the character he is playing,” Lahr writes, the performer “suddenly stands helpless before the audience as himself; he loses the illusion of invisibility.”

This is what happened to me onstage when I had my first panic attack. I lost the illusion of playing a role — violinist — and suddenly saw what I really was: a fake and a fraud. Someone who was working for an orchestra that tricked people into thinking they were listening to a live concert. Someone who was getting paid more money to be a silent female body than she could hope to make with her college-educated brain.

I wish I could say that this realization came quickly, but it took me many years to untangle. I eventually quit the Milli Violini ensemble and went to graduate school to study writing. Now I work as a creative-writing professor, a job that doesn’t give me panic attacks the way fake violin performances did. When I am teaching, I feel relaxed. Perhaps this is because I am focused on other people and what they need from me, or perhaps this is because the work feels real; I see improvements in my students’ writing after they do things I have taught them to do.

I can identify only one positive consequence of suffering through years of panic attacks: I am much more adept at recognizing anxiety and panic in other people. When a student tells me that they cannot read aloud in class, or says that they are afraid of the sound of applause, or simply bolts out of the classroom in the middle of a lecture, I accommodate them as much as possible. I am more observant and compassionate toward those whose behavior seems bizarre or rude. Sometimes, my students ask me for career advice, and I tell them this: beware of jobs that seem too good to be true, particularly jobs that seek young women to be seen and not heard. After all, there may be two ways to become a professional violinist, or a professional writer, or a professional anything — the real way and the fake way — but the inability to tell the difference between the two, the inability to tell the difference between the real and the fake, is a classic symptom of mental illness.

*Jessica Chiccehitto Hindman is the author of* Sounds Like Titanic, *a forthcoming memoir from W.W. Norton. She teaches creative writing at Northern Kentucky University*.