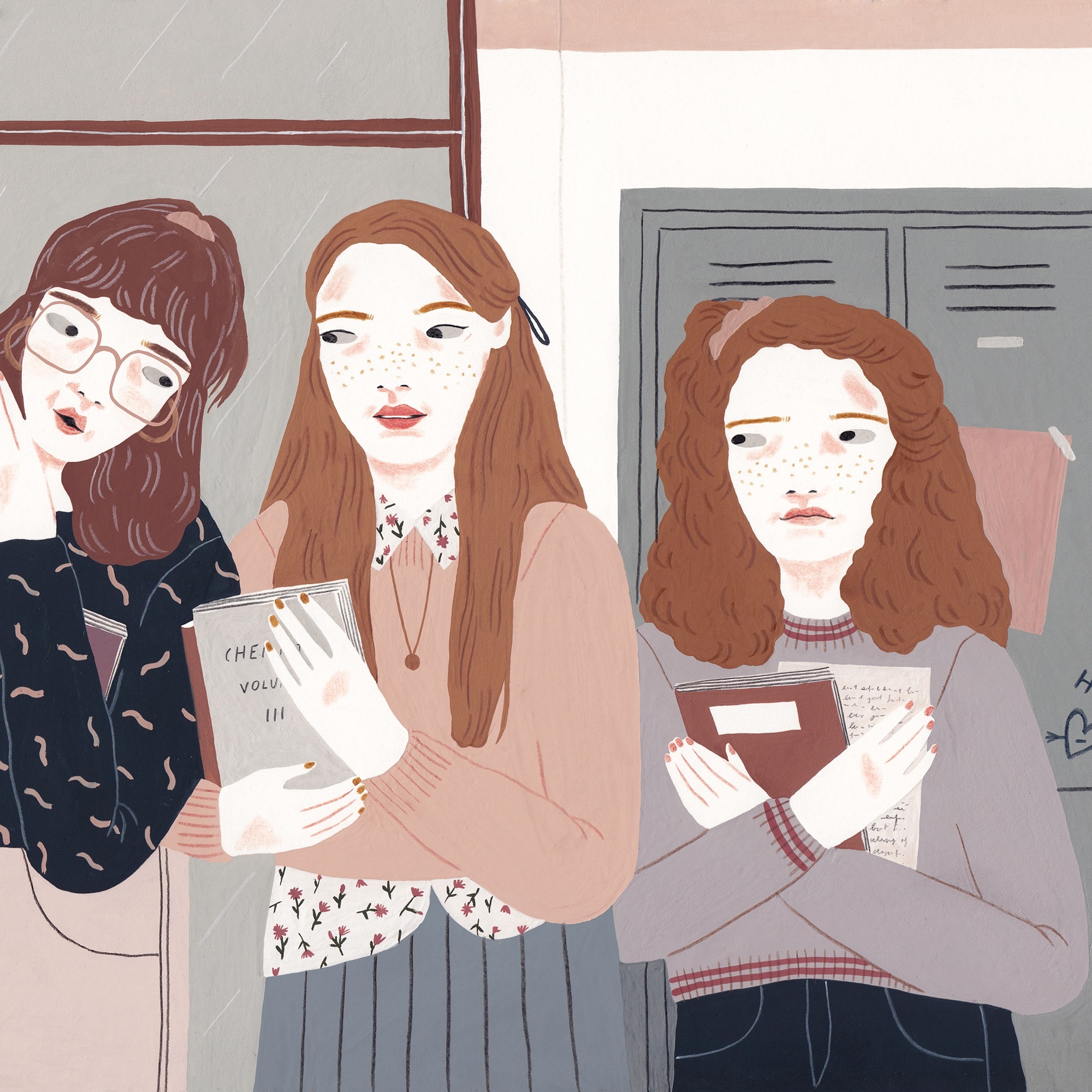 The boy called. I didn’t know how he’d gotten my number. He asked for me by name, and my mom put her hand over the receiver and mouthed, *It’s a boy!*

A popular boy. The kind who wore slouching khakis and a worn-in white baseball cap, who would grow up to have a line of premium vodka and a featured story in the wedding announcement section of the *New York Times*. Not really my type, but I didn’t have a type back then.

I was more concerned with being a type, the type *She* had patented.

When she wasn’t looking, I studied Her — the way she held Her pen in class, elbow pointed outward, bracelets chiming. The way she tilted Her head to drag on a Parliament. And once, through a crack in Her bathroom door, I watched her twist around and take a tissue to her backside. *So this is how you’re supposed to look when you go to the bathroom*, I thought.

“How’d you get my number?” I asked the boy on the phone. It was something I’d heard her say to a boy before, though her voice had a lilt that gave it a less accusatory tone.

He spoke of the Hebrew-school directory. She had introduced me to him in the elevator at the synagogue after our weekly confirmation class. At 14, She was the access point to boys from other schools, and that was powerful to students at an all-girls school.

Boys defined us, despite their absence in our formal education. And they liked Her. I was the friend who flanked Her, waiting outside rooms they pulled Her into and knocking on doors when our curfew was getting close. I was the short one with the big nose, the one who visibly shook around the boys, who didn’t matter but whom She insisted come along and they said fine.

Once, I thought we were the same. We were neighbors, B-plus students, lefties. Our moms were friends, and we both hated our moms, but not really. We liked chocolate cat tongues and sleepovers, kiwi Body Shop soap and walking to school together, pretending we were famous people engaged in a famous conversation, using words like *agent* and *movie trailer* loud enough that strangers might hear.

“Where would you take me?” I asked him.

The other line beeped. It was Her.

In Her bedroom, we listed what embarrassed us — beyond farts and period stains — the weird stuff we couldn’t explain. Her dad’s baldness, my father’s predilection for cowboy hats, saying the word *Guggenheim*. These were the conversations that made me love Her.

For a time, we were so similar — same bra size, same skinny legs and arms, same pinkish, freckled skin and green eyes — I imagined we were one person, split in two. But after boys, when we compared our reflections, I noticed Her green eyes were jewel-toned rather than swampy, Her lower lip was fuller than mine, and despite Her protestations, Her nose wasn’t as prominent. Nothing could be done about my hair, a halo of wool that was all I could see of myself in Her bathroom mirror, unless I stood on a stool.

“You’re obsessed with Her,” Her first best friend once told me, and I resented her for implying the feeling wasn’t mutual.

“Guess who’s on the other line,” I said, pausing between the popular boy’s first and last name for effect. If she was jealous, she kept it to herself.

“See?” she might have said encouragingly, but it wasn’t like Her to condescend. More likely, she pretended the boy’s call was as normal an occurrence for me as it was for Her. There were things we didn’t say outright.

There were lies. She would say she’d gotten a bad grade when she hadn’t, or that a boy liked me when she knew he liked Her instead. But these were merciful deceptions, simple mistakes. Anyway, I lied too.

The boy on the other line referenced something we had in common, a joke we shared, or a time we first met that wasn’t the time I remember.

He’d made a mistake, of course. He thought I was Her, and for a moment, so did I. But if he met me, if I opened the door and saw the flash of disappointment on his face, it would confirm what I already knew: I was unlovable.

“I think you’re confusing me with someone else,” I had to tell him.

We were sixteen when I decided to end my friendship with Her. Around that time, I was cutting up my arms with a kitchen knife. After my scabs were discovered, my family encouraged me to consider the root of my self-loathing.

I thought of Her, and how our discrepancies had become too hard to ignore. As long as she remained my point of comparison, I’d always be the girl who wasn’t Her. So I called to tell Her I needed a break.

In the years to come, I would have other close friends. I would learn to replace envy with respect and drive, to confront someone without cutting them off, to diminish the value placed on male approval and better understand the origins of my insecurities. I learned how much you miss someone when they’re gone, and how their absence will haunt you.

After graduation, She and I had virtually no direct interaction. However, there were four cryptic messages she sent me through the years, each delivered by a third party. The first two took the form of a question.

1. “Did you ever threaten Her with a knife when you were a teenager?” my mother asked me. She’d heard, through a chain of mothers, that this was the reason for our friendship’s ending.

2. “Why did you pass Her on the street and pretend you didn’t see Her?” Her first best friend, who remained as such, asked when we met up post-college.

But I hadn’t done these things. At least, I have no memory of either incident, and yet both seem like impulses I might have had, troubled as I was as a teenager and ashamed as I was about it years later. It was as if She had witnessed the dreams I’d had of Her — dreams I still have, even now in my late 30s. In a recent one, She was looking at me as she whispered in someone else’s ear.

The third message She sent came amid a bad breakup. She tagged an old photo of us on Facebook. I was at work when I saw the picture and instinctively slid off the chair to hide under my desk. Then I deleted my Facebook account. She reached out to my sister to see if I was OK. “What should I write back?” my sister asked. “Don’t,” I told Her.

“He thinks I’m you,” I said. I’d put the boy on hold, so I could tell Her and get the humiliation over with. I pretended this was actually what I’d wanted all along. “Really?” she said, quietly enough for me recognize that this was more embarrassing than a bald dad.

“I can give him your number if you want,” I think I said, but she didn’t seem to care.

For a moment, we were the same person, but now we were not. Maybe some part of Her was disappointed, too.

Either way, he’d already hung up.

The fourth message She sent was delivered by a best friend I made as an adult. By fate, my newer friend was Her neighbor, and they soon became close. I anguished over what She might say about me. Irrational as it was, I believed she knew the dark truth about me, whatever that was, and Her role on this planet was to warn others about it.

In fact, the message she sent was “Tell Piper I’m sorry.”

“For what?” I asked my friend.

Recently, I thought to respond. “I miss you,” I could write, but enough time has passed that the sentiment isn’t accurate. “I missed the opportunity to know you better,” I might write in the future. Or “How are you?” Or “What were you sorry about?” Or “I’m sorry, too.”

*Piper Weiss is the author of* (1), *published by William Morrow. She lives in Brooklyn.*