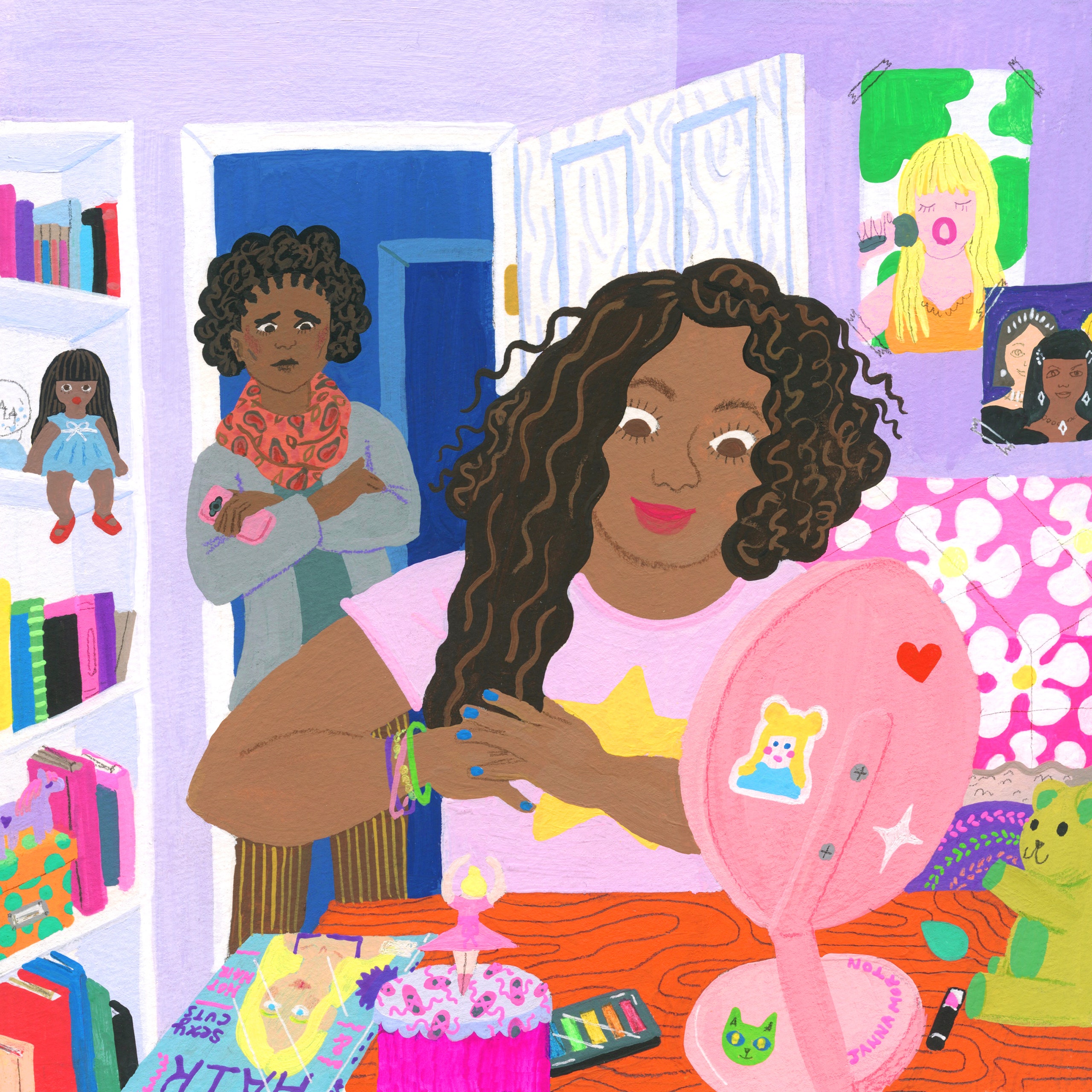 A few weeks ago, my sister called to let me know that Zoe, my ten-year-old niece, wants to straighten her hair.

“I knew this day would probably come,” she said, her strained voice radiating distress.

My two-year-old daughter, Eve, was already tucked into bed, her hair in neat, geometric cornrows that I take pleasure in styling every week. Even as my sister and I spoke somewhat mournfully about courses of action she should take, why Zoe would suddenly want this hairstyle, and how to come to some sort of compromise, I marveled at the dour tone of the entire conversation.

I remember all too well my childhood obsession with long, straight hair that shimmered and shook in the slightest breeze. Loose curls that bounced and swayed with every gentle toss of the head. When I was as young as five years old, I would look in the mirror and prod at my hair, which — even relaxed — refused to slip daintily through my fingers or flip over my shoulder with the practiced ease I saw demonstrated in my fairer-skinned classmates. Rather than obey my fingers’ or comb’s commands, it would stick stubbornly outward, looking like Alfalfa from *The Little Rascals*, whom I understood to be a comedic character. I didn’t want my hair to be funny; I wanted it to be *glamorous*. Beautiful. Like the Pantene and Herbal Essence commercials: flowing, wavy, free.

It was this yearning that I thought of, frowning, with the phone perched between my ear and shoulder. “I mean, it’s definitely normal,” I said to my sister, Sophia. “She’s getting to that age. I was obsessed with having straight hair when I was eleven.” For a significant period in middle school, I had worn my hair in the same exact style every single day: a high bun with a side parted bang. I would stand at my vanity and brush and straighten and brush until my mother implored me to stop. I couldn’t stand the imperfection of a flyaway hair or crooked bump.

In high school, my tastes inverted into a desire for effortless disarray: the ever-elusive *messy bun*. That “I just washed my hair and tossed it up with this scrunchie,” blasé look. I couldn’t understand the mechanics of the style or begin to make sense of the sheer injustice: I was positive that if I’d even attempted to leave the house displaying such a lack of effort, my mother would have marched me right back upstairs to “do something with your hair.” The one time I’d even come close to this sort of devil-may-care approach (washing my hair immediately after taking braids out), my mother had to cut off all my hair. The tangles bested our combs, our conditioners, and our prayers. Messy bun.

“I know. Me too. And that’s the problem,” Sophia countered. “I don’t want her to go through what we did. I don’t want to have to deal with the drama. She already spends forever staring into the mirror, playing with her hair.”

One of us suggested that she be allowed to wear her hair straightened only for special occasions, I can’t remember who. Let her choose when, but with the explicit stipulation that it was not going to be a normal occurrence. Maybe a texturizer instead of straightener. Or a very soft perm? You know, just leave it in for half the recommended time. Every consideration bore the weight of our lived experience with the drama of our hair: we both knew that this small wish of Zoe’s was the first step of many on her journey to adolescent self-discovery.

“I don’t know,” I admitted eventually. “I think it may be inevitable that she’ll have to learn by fire why you don’t want her to do this. And if you forbid it, she’ll want it even more.”

In 2006, India.Arie crooned *I am not my hair*, and I sang along, righteously indignant and fully aware that I was lying to myself. I appreciated the message of the song, that of self-love and acceptance regardless of appearance, but my preoccupation with the way I looked consumed much more of my mental and physical energy than India probably would have approved of. Most days, I felt like I *was* my hair: my moods hinged on my satisfaction with whatever it was doing on a particular day, I played with it constantly, and I cringe to think of the dollars I’ve parted ways with in service of maintenance. It’s the first thing I look at when staring into a mirror, when glancing at strangers, being reunited with friends. *What was my hair doing in this pic? Okay, side swoop! Wow, is that her real hair?!*

My hair has endured much in my 29 years. A perm before I lost the majority of my baby teeth, an abrupt haircut that led to a natural afro in eighth grade, flat-ironed to within an inch of its life in high school. In college I made the grave mistake of dyeing it red in the bathroom of my mother’s house while my best friend looked on, fascinated. Lesson learned. I returned from my junior year abroad with my very first Tumblr page, having spent hours scrolling and reblogging photos of black women joyfully embracing their natural hair. Freshly inspired by these images, I wasted no time before shearing off my straggly permed ends to sport my own teeny-weeny afro (TWA, in natural-hair blog parlance). I’ve sewn, braided, and twisted in all sorts of weaves and extensions, dabbed Jamaican black castor oil on my edges, praying that whatever damage I’d inflicted would reverse itself. And finally, in the early days of fall 2013, I adopted what I hoped would become my last style: locs.

In Cheryl Thompson’s 2009 study for the University of Michigan “Black Women and Identity: What’s Hair Got to Do With It?,” she posits, “For young black girls, hair is not just something to play with, it is something that is laden with messages, and it has the power to dictate how others treat you, and in turn, how you feel about yourself.” It’s a double-edged sword, this hyperawareness of our appearance, because for many black women, coming to terms with how we feel about our image in the mirror and anticipating how others will perceive us are simply opposite sides of the same coin. It’s the same principle that underlies the truth of “twice as good to receive half as much.” I’ve caught myself falling victim to this mentality, which justified judging myself and others more harshly before someone else could. I probably spend more money experimenting with organic conditioners and oils for my daughter’s hair than I should. Schedules are created around the times that I know I’ll need to style her hair for the week. I am somewhat ashamed to admit that a very deep and primal part of me recoils at the idea of anyone ever looking at my daughter’s hair and wondering, *Her mother really let that baby leave the house looking like that?*

In November 2017, a corner of the Internet erupted when a black model for J. Crew was depicted with a “ (1).” The brand is known for its signature casual style, which includes low-key, “I woke up like this” chic, but for this particular model, whose hair is clearly natural, the aesthetic didn’t quite hit the mark for many, including me. Although the model, Marihenny Rivera Pasible, eventually took to Instagram to address the backlash head-on (“these days it is all about women embracing their natural looks so here it is! We as human beings are never satisfied…”), the sheer outrage that a seemingly harmless ad caused spoke volumes. I’ll admit that the photo gave me pause as well — “I bet the stylist was white,” I remembering muttering to myself. Maybe it was the angles, maybe the lighting, but I couldn’t help thinking that there were a multitude of styles better suited for her hair type. The high ponytail seemed awkward considering the length of her hair, and the wisps of escaping hair seemed more slapdash than styled. I am an advocate for natural hair; I want women of all shades to feel comfortable wearing their hair as it grows from their head, but I believe in the power of styling product as one’s hair type demands: to moisturize, to sculpt, to illustrate its innate beauty rather than imitate another’s. It’s a position that is inherently contradictory but one I cannot in truth say I have evolved away from. Yet again, the messy bun eludes me.

A few weeks after our initial conversation, I texted my sister to ask what she had decided. “Did you ever end up letting Zoe straighten her hair?”

She had. “Hate to admit it was so much easier to handle, and so cute!” She attached several photos of my niece with her response, showing Zoe glancing at the camera in a clearly candid pose, sporting thick, wavy hair that brushed just past her shoulders. In another photo, long, braided pigtails are tossed elegantly over her shoulder as she sips from a Starbucks cup, staring pensively to her right. My heart ached with reminiscence: I could almost *feel* the preteen angst and attitude wafting from my phone screen, so bittersweet and lovely in the face that I’ve watched grow and shift over the years. “You’ll find zero judgment here,” I typed back to my sister, followed by a string of heart-eye emojis.

In truth, sometimes I worry about the tenacity with which we cling to the natural-hair ideal. I wonder how Eve, in 2026, will negotiate the complexities of her identity as a black girl in whatever version of the USA we’ll be living in. Will the concept of “natural” and “real” and “synthetic” even communicate the same meaning? How much will our conversation about the politics of our appearance have shifted? When she looks at me, her mother with locs, what will she see? I want to be meticulous and measured in how I approach these thorny topics, the same way that I schedule time to deep condition her delicate curls and rub coconut and jojoba oils into her soft scalp. But I know the day will come that she will resist the childish styles I adore, the same way I did, and my sister did, and her daughter did.

I’ll have to relinquish that control and allow her to stumble into whoever she is meant to be. Bumps, flyaway hairs, imperfections. I’ll be there to document it all.

*Carla Bruce-Eddings is an associate publicist at Riverhead Books and a freelance writer and books editor for Well-Read Black Girl. Her writing has been featured in* New York *Magazine, Refinery29, the Establishment, Literary Hub, and elsewhere.*