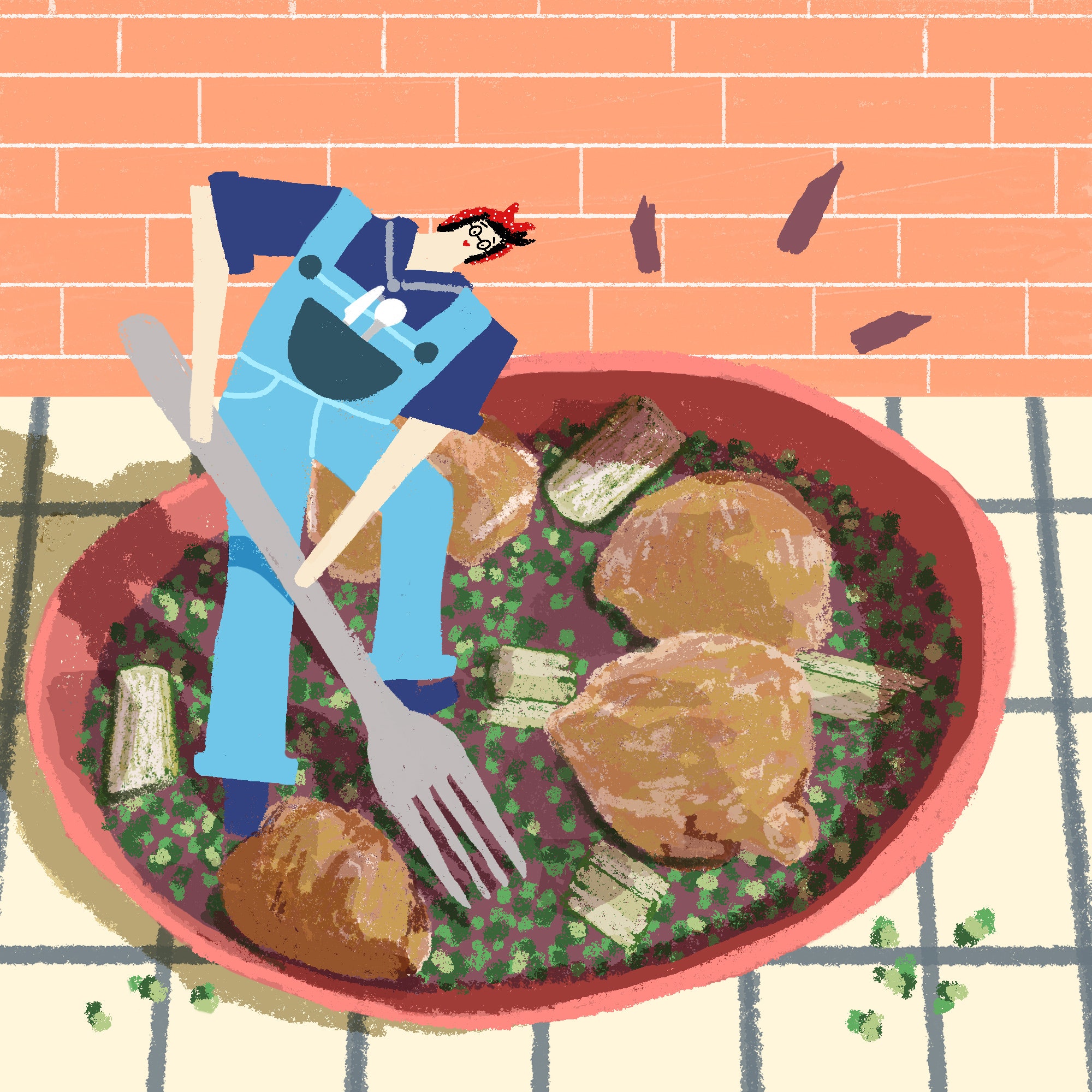 All home cooks tend to have one major flaw. We don’t say “I’m a home cook.” We say “Oh, I’m just a home cook.” I spend my time on the road urging people to lose that “just,” to stop apologizing, desist from outlining the ways in which our talents, abilities, and output fall short. What we are doing is comparing ourselves to chefs and feeling ourselves the lesser for it. We are not chefs; we can’t do things that chefs can do — we don’t have the time, energy, or training — but to deduce that we are inadequate at the task of creatively feeding ourselves and others is madness.

I am routinely called a chef. I point out, politely, that I am not a chef, but a home cook who writes about food (I have no training and have never cooked professionally), and I am always charmingly chided for being modest. But I am not being modest in the slightest: I don’t regard being called a chef as an accolade; I regard it as a case of false attribution.

I can see it confuses people: If someone writes books and cooks, albeit clumsily, on TV, then it is fair to presume that person is a professional. So I will own up gladly to being a professional food writer. But I started my food-writing career (relatively late in life — my first book, *How to Eat*, came out when I was 38) precisely because I felt that the domination of chef-food in publishing and television was damaging and wrong. Real cooking is what happens in the home. Restaurant cooking can be fabulous, inspiring, transcendent, and oh-so-marvelous in many ways, but for me it will always partly belong to the realm of theater. Furthermore, the restaurant kitchen insists and relies on conformity; the spontaneity of the home cook is by contrast gloriously anarchic. Don’t apologize for that: revel in it.

Of course, there’s a reason why the home cook has always been seen as a lesser creature: traditionally, chefs had been male and paid; home cooking was “women’s work,” unwaged and taken for granted, sentimentally prized but not essentially valued or respected. There was a time when denigrating cooking and insisting on how hopeless you were at it were ways of establishing distance from the role of domestic drudge. And yet I have always felt that to disparage an activity because it has been traditionally female is itself anti-feminist.

Moreover, cooking seems to me to be one of the basic prerequisites for sustaining the self: it is an act of primary independence. I love feeding other people — I can’t even let a person who’s come in to mend my boiler leave without something wrapped in aluminum foil — but I derive no less deep satisfaction from feeding myself.

Cooking is also, supremely, a creative act. By that I mean not an art but a craft. I leave the Art with a capital A to chefs. For the home cook, or for this home cook in particular, there is something less lofty and more physical: the feel of the dough in my fingers, the scent of a lemon as I zest the skin and the aromatic oils spritz in the air, the sizzle of onions in a pan, the darkly gleaming beauty of an eggplant. Cooking provides deep aesthetic pleasure though it is manual work.

But it doesn’t have to be labor. It doesn’t have to be difficult. It certainly can be difficult: I read any recipe written by an award-winning chef, and I know I will be daunted. Getting dinner on the table doesn’t require any abstruse skills, arcane knowledge, or even dexterity. I haven’t got a knife skill to my name, but I cook often and gladly. For home cooking is not technique-driven but taste-led. The very simplest processes can lead to great complexity of flavor. The chicken-and-pea recipe below is a testament to that.

And, of course, all too often there is a great misunderstanding about what home cooking is, as if authentic home cooking can exist only if we use ingredients that were available before the industrial revolution and make dishes that were a feature of our grandparents’ kitchens. I was always mystified by this until I realized that this nostalgic reading — the familiar fallback of those for whom *home cooking* means an unchanging repertoire from a glorified past — comes from those who don’t cook. If you don’t cook, of course the term has a museum-piece feel about it. Those of us who do cook are greedy for the ingredients that may be new to us; dishes from other cultures’ cuisines breathe new life into our kitchens.

So much of cooking is more jumbled than that: we are not creating a cuisine, we are making something to eat. Sometimes, this means we go to the store for far-flung ingredients; at other times, we simply choose the ease of the familiar. Neither is better than the other, and sometimes the two are fused: ultimately all home cooking provides comfort.

This Chicken-and-Pea Traybake is a favorite of mine. (Food snobs may be dismayed by a recipe that leads with a packet of frozen peas, but I don’t see why that should worry us.) It is the simplest sort of cooking: the frozen peas are clattered into an oven tin, mixed with dry white vermouth, leeks, garlic, dill, salt, and olive oil, topped with chicken thighs, and cooked in the oven. Use white wine in place of the vermouth if you want (I am not enough of a drinker to keep an open bottle of wine about) or replace with chicken broth (and I don’t mean you have to make your own), and if you prefer thyme to dill, then fine by me. Cooking is by its very nature improvisational: a recipe must be utterly reliable, but it is always an invitation, not a command.

I thought I had exhausted the culinary possibilities of a package of frozen peas, but my friend Alex Andreou, an excellent cook, led me by the hand — it does take a leap of faith — to his method of using them, still frozen, as the first layer of a traybake. It’s a life-changer. The peas become soft and sweet in the heat — duller in color, but so much more vibrant in flavor — and the steam they produce as they bake makes the chicken beautifully tender, its skin crackly and crisp on top.

What’s key here is the size of the roasting pan. I wouldn’t go any smaller — measuring from inside rim to inside rim — than about 15 by 11 inches (a little larger is fine), as there needs to be space around the chicken thighs for the magic to happen.

1. Preheat the oven to 400°F and clatter the frozen peas into a large roasting pan, followed by the leeks, garlic, vermouth, 2 tablespoons of oil, 2 teaspoons of salt, and most of the dill. Turn everything together in the pan — breaking up any large clumps of the frozen peas — until well mixed. I advise you to wear *CSI* gloves for this, just to stop you getting frostbite, though you still will feel the cold.

2. Arrange the chicken thighs, skin-side up, on top, then drizzle them with a little olive oil and give them a good sprinkling of salt, before roasting in the oven for 45 minutes. Remove from the oven and give the peas a small stir or tamp down, so that the few that are sitting on the surface and drying out a little are submerged in the liquid. Don’t do the same to the leeks, however, as the bits that are peeking out will become desirably caramelized in the heat. Put back in the oven for a further 30 minutes, by which time the peas and leeks will be soft and the chicken tender and cooked through, its skin golden and crisp.

3. Tear off the remaining dill fronds, and scatter over the top before serving, perhaps with some simple steamed baby potatoes to soak up the pea and chicken juices.

*Recipe from* At My Table: A Celebration of Home Cooking, *by Nigella Lawson (Flatiron Books, 2018)*.