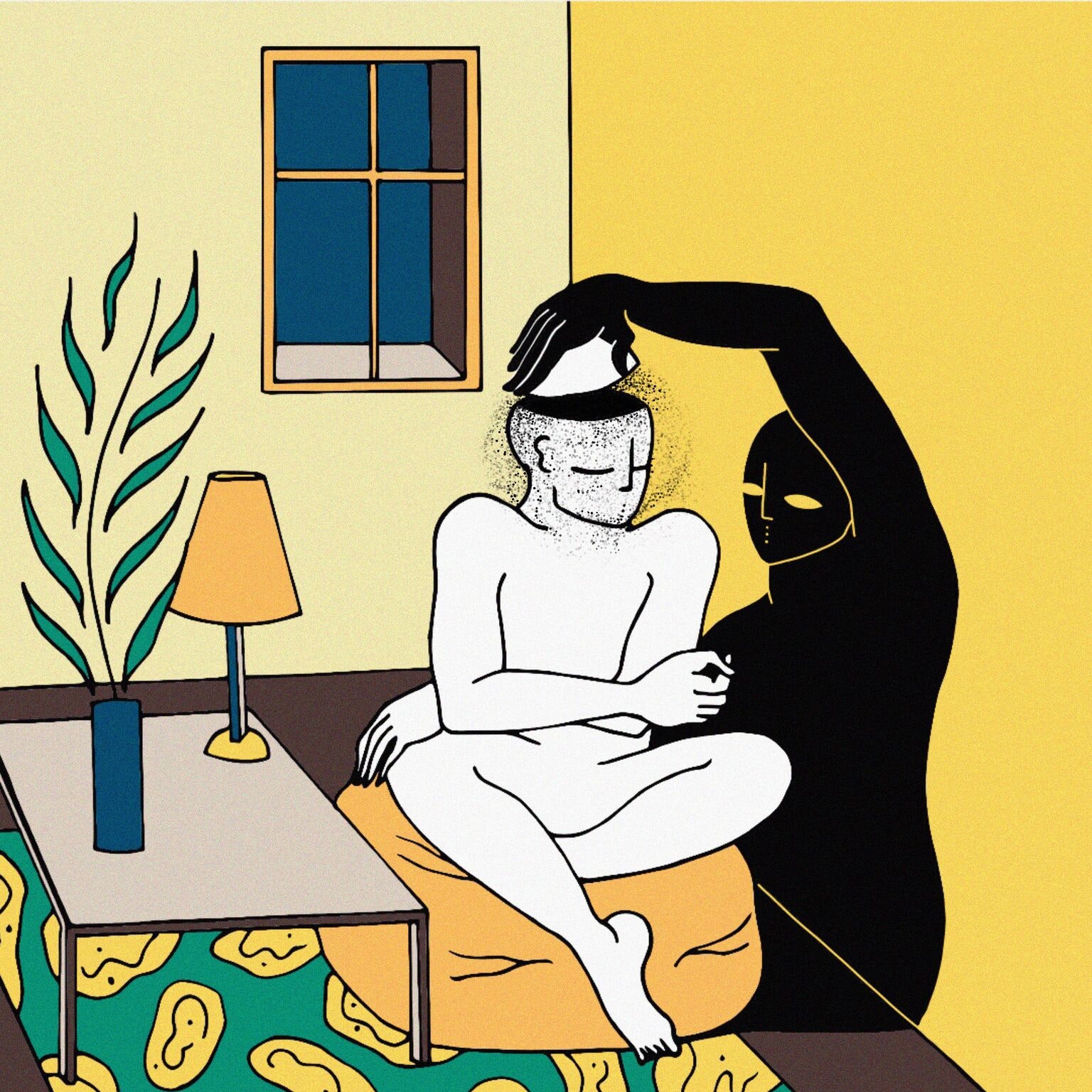 During the years in which I struggled to manage depression — from late high school to my early twenties — I was always on the lookout for one true metaphor to encapsulate the experience: a perfect cotton sheet I could whip in the air and watch waft down into every nook, reflecting the precise shape of the depression. I was constantly generating new metaphors, not to explain it to others (I knew that was a fool’s errand) but as an attempt to cope, because every metaphor for the depressed state seemed to reveal an approach worth trying out.

If you call depression a dragon (metaphor No. 1), a slaying is in order, but that’s far too vague to be useful, so instead you might decide to think of it as a poisonous fog (No. 2). Now you’re dealing with something that rolls into your life and corrodes everything meaningful in its path. Your job is clear: protect what you care most about, and let the rest evaporate into the mist. If you choose to think of depression as a kind of gravity (No. 3), then you’re tasked with building new muscles to push up against it or finding ways to leverage its downward force.

Ultimately, it was not the right metaphor that improved things for me, but the right meds. Yes, there were plenty of adjunct therapies as well, but the meds got me to a place of resilience that allowed me to pursue all that personal work.

This general better-ness took hold in my life approximately, oh, six years ago or so? I’m not sure exactly when, because paying attention to time’s passage was a habit I gave up during depression. Seriously, I stopped writing the date atop journal entries, because the date was never good news:it always triggered thoughts of how “profoundly far behind” I was on “all fronts.”

Depression _feels_ like a long time ago now, and that’s enough for me; I cautiously say I am pretty functional these days. I live in New York City, where I’m chasing my dreams or at least staggering after them like a monster arisen at the end of a film. I don’t even “identify” as Struggling With Depression anymore. I prefer the term _depresso,_ which I use to mean that I am merely One Who Knows.

I’d like to say it was quite a shock when some symptoms recently reappeared, but depression is just too sneaky a foe for a grand entrance (No. 4). Instead, it was a dark filter creeping its way onto my perspective over the course of a few weeks (No. 5).

I’m truly not quite sure how I caught it, because the symptoms were so subtle. Being generally pantsless and strategically avoidant are habits I’ve incorporated into my functional life and thus don’t really raise alarm. There was the extra self-coaching I needed to get into the shower, the even-greater-than-usual resistance to picking up a phone call, and the slight visual change, a darkening at the corners that I swear is real.

I’m not sure exactly what made me wonder if something was amiss, but it was enough to check if something was up with the medication … and it was. A few weeks before I’d started feeling off, my pharmacy had filled my prescription for generic Wellbutrin with a different manufacturer’s version. I texted my longtime psychiatrist, who confirmed with absoluteness that this could be the source of my mood change: “Not all generics are created equal,” she texted back. My subtle suspicions that depression tentacles (No. 6) were beginning to slither up around my ankles were validated. “I was right! Something _was_ up!” I breathlessly told my boyfriend Chris.

I was proud that I had successfully spotted the depression’s presence. I felt like a retired ghost hunter who hadn’t seen a spirit (No. 7) in a long while but upon feeling an errant chill on her neck trusted herself enough to grab the EMF reader. I had acted swiftly and sleuthed out the cause. Still, it felt like luck. In the future, should another meds snafu occur, would I catch it again?

> Depression either convinces you there is no out or, even more insidiously, that there’s no pathology in the first place.

I secure the new scrip and prattle on to Chris about how we’ll be enduring a few weeks of my brain working against me. I tell him that until my depression _clears up,_ not unlike a common cold (No. 8), he needs to indulge my Netflix choices. I sound pleased with myself, saying “_my_ depression” in that gross way a grandmother might refer to _her_ bursitis.

I explain to him my personal best practices for distracting the depression brain with streaming content. First stop, thrillers, ideally those that give me a psychologically troubled detective in addition to a serial killer with a disturbing origin story: flashbacks to an abusive mother and such. Up next, gruesome horror. That which some call _torture porn,_ I call a great way to ground myself in the physical body by triggering a sympathetic survival instinct. A true-crime doc, _maybe,_ as long as it’s “not about, like, drug cartels,” I tell him. No large-scale, systemic problems. I want dark family tragedies, please. Oh, and of course … no comedy. It reminds me of “work.”

Chris holds the remote suspended and looks at me with a kindly neutral expression as our unopened containers of miso soup slowly leech plastic into the broth. I sound like a kid making up fake rules to justify their whims to a new babysitter. “Really, you’ll just have to trust me,” I say smugly. I have a cavalier swagger about getting through it, because I still have at least half of my healthy mind, a mind that trusts the meds to swoop in and helicopter me out of the depression canyon (No. 9).

Admittedly, I am also curious about the weeks ahead: How does depression feel when you believe with certainty that it will lift? In theory, it’s impossible. Depression either convinces you there is no out or, even more insidiously, that there’s no pathology in the first place. But because I’m not yet submerged in complete depression, my confidence in my reprieve is holding strong. I’ve got one foot in, one out (No. 10), and so I start to scheme: Maybe this partial dip is a great opportunity to observe myself and diligently note how depression expresses itself in present-day me. Then, in the future, I’ll have a more up-to-date set of symptoms to watch out for, should it come for me again. I gear up for my self-study.

I remind myself that because depression is invisible like the wind (No. 11), I must remember to study its effects, the napkins flying off the picnic table. Oh, and I’ll have to be on guard against that mental gremlin (No. 12) who speaks untruths, using your idiosyncratic lexicon against you. I’ll refuse to argue with the devil (No. 13), because the devil always wins. The devil? Maybe thinking of it in religious terms is dangerous. Perhaps it’s more like a swarm of mosquitoes, death by a thousand … (No. 14)

Oh, dear, the useless, compulsive metaphor-building is back, and once again it’s trying to pass itself off as essential work. This time, I become convinced that finding the right metaphor would mean discovering depression’s essential blueprint (No. 15). Then, next time around, regardless of surface symptoms, I’ll spot it based on in its most basic form. I’ll see the golden ratio beneath the aluminum siding (No. 16)! My poor little metaphors, how tirelessly I tinker with you, yet what useless trinkets you are (No. 17; I’m doing metaphors for metaphors now).

But wait! While individually they are useless, perhaps as a group they could serve me well in the future. If I ever see my pathetic army of metaphors suiting up, I’ll know that I’m shrinking down to a size where my mind is my whole world. I’ll spring, or slouch, into action, check the meds, and figure it out.

But I get ahead of myself. For now, all I want to do is relish the blessing of knowing I have an out. Depression makes the mind a shifty place, a windy desert dune (last one, No. 18), and I only need to tolerate life inside it for a few short weeks, not make it habitable long-term. I cede the task of desperately building sandcastle shelters only to feel the crumble through my fingers moments later. I can shut my eyes and let the wind blow the sand all around me.

I will watch my movies with Chris. I will order in two sequential dinners, 9 p.m. and 1 a.m., and explain confidently that yes, it’s time for another nap, and no, I won’t be going to the event tonight. In a few weeks, I will do _life_ again. I’ll be full size. For now, may I say good day, sir, as my horse and I clippity-clop into the horizon of distractions. No more metaphors. Except that one. I needed one for the road (No. 19).

*Jacqueline Novak is a stand-up comedian and the author of the memoir* How to Weep in Public: Feeble Offerings on Depression From One Who Knows. *Follow her on Twitter: @ (1).*