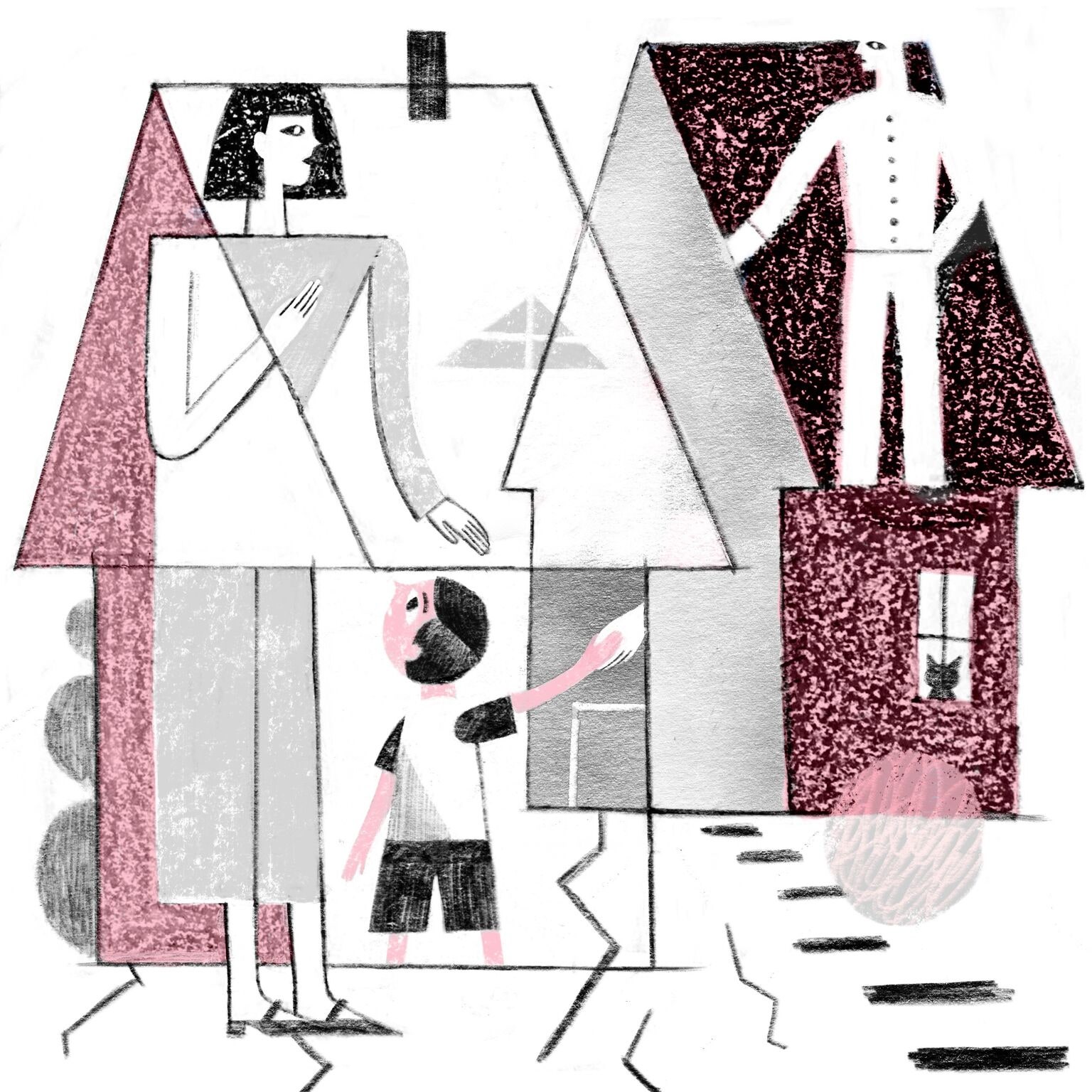 I tried to pull him along, but my son refused to move. I crouched down to ask what was wrong, even though I knew what was wrong. His face crumpled, and he started crying that awful, soundless cry that is the opposite of a get-your-attention cry. He moved his head so that his long, golden hair would obscure his face: he didn’t want me to see. This was private pain.

No child should be left with that kind of pain, so I said, without directly acknowledging the source of it, “Let’s be brave and keep walking, and you can close your eyes.” He nodded, and that’s what we did.

He didn’t see me cry walking next to him.

A week later, we had to cross Wallace Avenue again. I gripped my son’s hand tight, and he looked up and smiled. “I’ve developed a new strategy,” he said. “When I think of the old house, a siren goes off in my brain. I line up all my brain cells against the wall and then look for a hiding place, and I run there and take three deep breaths. Then I forget about it.”

“That’s called denial,” I wanted to tell my little CBT robot, but he is seven, and I’m not a total asshole, and, besides, it is true that:

Forgetting In the beginning, I walked by my old house compulsively. I wanted to see if the new owners were taking care of it.

It did hurt, but in that half-pleasant itchy way the way a sore tooth can feel sometimes. Maybe because, simultaneously, I also felt relief that it was over and that there was nothing I could do about the situation anymore.

Have I moved on? In the beginning, it felt as if I had moved on.

***
I live somewhere else now. In order for my son to remain in his school, I had to stay in the area, so I found a place not far from Wallace Avenue. The absence of my son’s chatter at the new dining-room table in my tiny new kitchen is a boy-shaped sadness I feel on the days he’s not with me (his father and I share custody). In this instance, I grieve too. I grieve all that time I took for granted before, when we ate breakfast together every day. How is he not here at breakfast every day? It feels wrong; it’s a *does-not-compute* situation. A few friends who have custody arrangements, say that, OK, you get used to it, but only because there’s no other choice. The reality sets in. You move on.

One day, you *will* move on, the friends say. When you’re ready.

And as much as I wish that for myself, does moving mean forgetting many of those good moments — my son at breakfast, impromptu kitchen dance parties — that made me happy on Wallace Avenue? Accepting that that’s not coming back?

My son is not the one who’s in denial with his cute strategy of dealing with the loss of the house. I am.

***
Grief is an occurrence that doesn’t follow a linear trajectory; it comes in waves — sometimes it’s a tsunami, and sometimes grief is a little splash. Some days I’m drowning in it, other times … I just have to get on with my day.

I feel guilty about my grief, too, because, indeed, nobody has died, my country isn’t under siege, and everyone is relatively healthy. A dissolution of a family shouldn’t be considered a disaster, yet it is; according to one definition, disaster is “an event or fact that has unfortunate consequences.”

Here are some: my son’s tears when walking by Wallace Avenue. His father’s tears while dropping my son off at school. And me? Some mornings, I wake up confused as to where I am because I am not in the blue master bedroom and my sleeping baby boy is not curled up into my stomach and his father is not next to me.

And that’s only the morning. My mornings were not supposed to look like this. Grief is also the destruction of the imagined future. For me, the future was really quite an unassuming one: my son as a teenager, coming home with his hockey equipment and sulkily disappearing into the basement (which is too small; in the future, we’ve been complaining about it for decades), and his father and I rolling our eyes at each other, and there are stupid cookies in the oven, and there’s some kind of a stupid happy dog with a tail slapping against the wooden floors, and it’s 2026.

***
There’s a condition called congenital analgesia where a person feels no pain. She can feel pressure and sensation but can’t, for example, tell if the hot water is so hot that it will scald her hand. This condition affects the peripheral nervous system, and it’s a form of peripheral neuropathy — the nerves that carry messages (of pain, of sensation) to and from the brain are damaged, and the system is out of whack. People with congenital analgesia suffer from bruises, cuts, and more serious injuries because they are unaware of the danger that the rest of us react to because pain is a warning sign. Pain prevents further damage. Pain alerts. Pain doesn’t let itself be ignored. Finally, pain signals the need for healing.

> What I know now: I might never get over my grief completely. Yet I need to feel it acutely because without it, my past becomes absurd.

What I know now: I might never get over my grief completely. Yet I need to feel it acutely because without it, my past becomes absurd; it would be as if Wallace Avenue never happened, but it did happen and it hurt and it needs to hurt before it can start getting better. My past and my future must meet in the middle, bring me to the present; only then will my grief become a nerve that is still there but that no longer hurts. As much.

I don’t walk by my old house anymore. I think of my son’s strategy, and I line up my brain cells against the wall and take three deep breaths. And in the next moment, I’ll walk by a FOR SALE sign on somebody’s front lawn and I’m out of breath.

*Jowita Bydlowska is the author of the best-selling memoir* Drunk Mom *and a debut novel,* GUY.