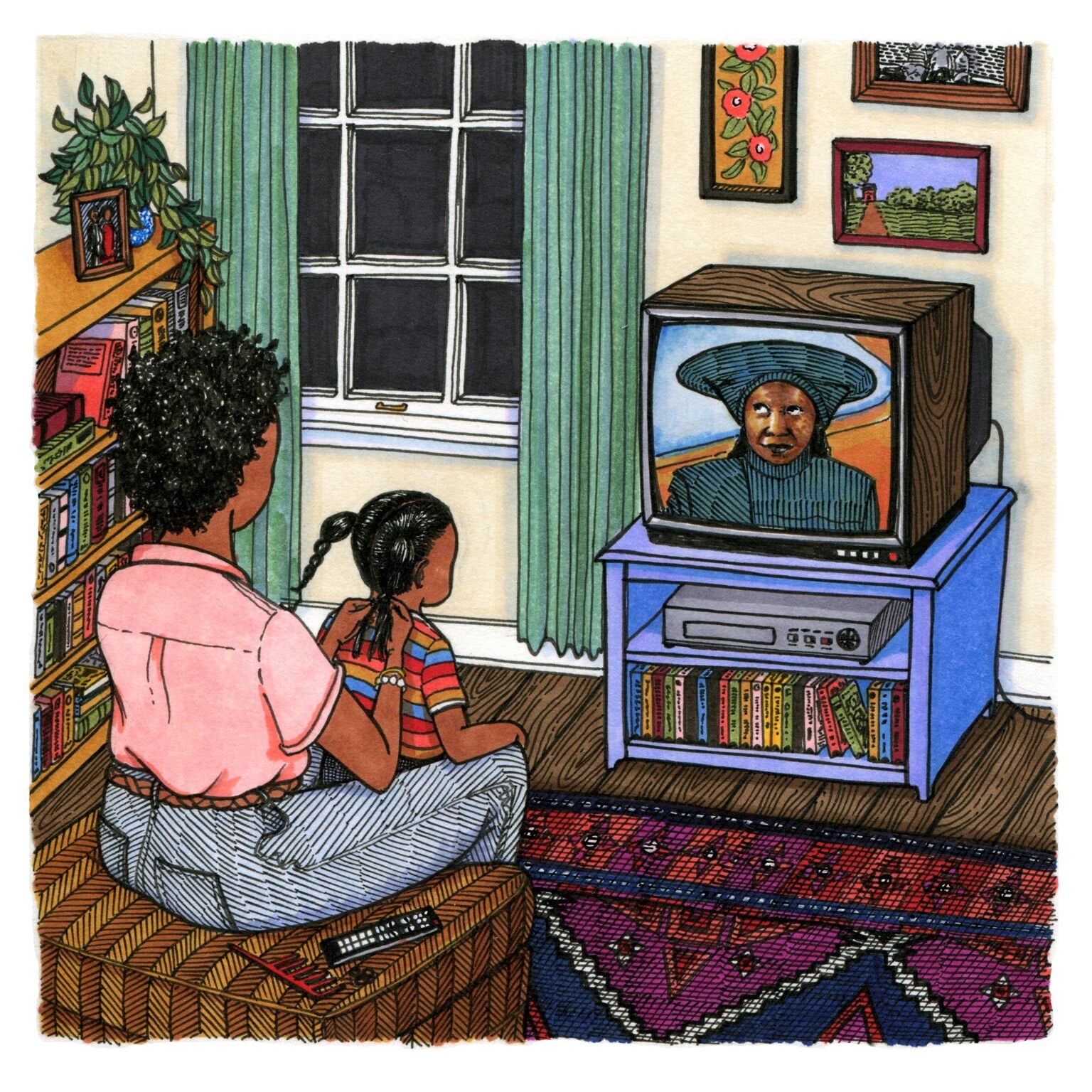 I remember reading a quote from Whoopi Goldberg where she talked about Nichelle Nichols’s role as Uhura on *Star Trek*: “When I was nine years old, *Star Trek* came on. I looked at it and went screaming through the house, ‘Come here, Mum, everybody, come quick, come quick, there’s a black lady on TV, and she ain’t no maid!’ I knew right then and there I could be anything I wanted to be.” And when I was younger, my mother would braid my hair while we watched *Star Trek: The Next Generation*, and I watched Whoopi play Guinan on the show, and the influence continued. Watching Whoopi and Nichelle in these roles showed me that the entertainment world and even intergalactic worlds are available to me because these women boldly went where no black woman had gone before.

Of course, not everyone needs to see their likeness in a particular position in order to reach it. Viola Davis won an Emmy for lead actress in a drama, and she was the first black woman to achieve that in the 67 years the Emmys have existed. She also just won a Screen Actors Guild award and gave a wonderful response to a reporter asking about (4) by saying “Diversity is not a trending topic.” Unfortunately, I read about her statement in an article titled something like “Diversity Wins SAG Awards,” so it seems the topic is still trending. There were a lot of articles like that. *Diversity Reigns at SAG Awards, Plenty of Diversity at SAG*. I even saw one that said *Diversity Makes a Comeback*. What?? Where did it go? I think people are getting confused by the word diversity. Diversity didn’t win a SAG award, a bunch of talented actors did.

I don’t know when this started happening, but some people are using the word *diversity* to mean “anyone but white people,” and that’s not what it actually means. If I want to put a diverse group (of anything) together, I would put together a spectrum of varying things. So if we’re talking racially (and we always are), that can include white people. Like, a bag of M&M’s is diverse, because they have a bunch of colors in the bag, and I’m assuming each color is evenly distributed (I’ve never counted the different colors in a bag of M&M’s, but I’d like to think it’s a good representation of a utopian society). If I opened up a bag of M&M’s and it was mostly full of green M&M’s and only a handful of blue and orange M&M’s were sprinkled throughout, this would not be a diverse bag, and I would think, *Whoever put this bag together is really obsessed with green M&M’s*.

Diversity isn’t something that just happens to appear every once in a while. It’s not going to surprise you on your birthday like, “Oh, I didn’t know diversity would be here! How fun!” It’s the act of inclusion, and it’s something that needs to be improved upon in so many fields. But it is getting better. People are working on it, and I appreciate it. I saw *Star Wars: The Force Awakens*, and I teared up a lot, for many reasons, but a big one is the two main characters of the film are a woman and a black man. And there were no winks to the camera like “Rey is strong for a girl” or any mentions of Finn’s race. They were just two full characters on a journey together. They both showed a wide range of emotions, and I got a true sense of their personalities and histories. I love that and want more of it.

> Diversity isn’t something that just happens to appear every once in a while. It’s not going to surprise you on your birthday like, “Oh, I didn’t know diversity would be here! How fun!”​

Hopefully we’ll get to a point where we can stop trying to “diversify” jobs and people will just hire qualified people who happen to have different backgrounds, and we won’t even have to focus on it because that’s just how people think. But we’re not there yet, and it’s something we still have to work on. So I want to lay out some guidelines we can use to keep each other accountable. If I walked out of the house with a crazy-looking outfit, I would want someone to tell me. If I cast a film that wasn’t utilizing as many diverse voices as it could, I would want someone to tell me. I hope other people feel the same way.

There are already some guidelines used to analyze female representation in movies, like (1). To pass it, a film needs to have:

—At least two women in it who talk to each other, about something besides a man.

—At least two people of color in it who talk to each other, about something besides race.

But these tests are mostly applied after the movies have already been made. I want to make a more specific list for people to check when they’re creating, well, just about anything — books, TV, movies, etc. And these aren’t hard-and-fast rules. I understand that some productions are period pieces, and if you’re in a certain location at a certain time, some groups of people won’t be represented. Like I wouldn’t expect to see actors from Latin America in a movie about Queen Elizabeth … unless the queen had a secret Latin lover we didn’t know about.

Here are some of my ideas. If you have more, add them! Let’s make this a living document to help one another:

You are not diversifying your cast if the only people of color in your production are service workers or criminals. Unless the project is about service workers and criminals. And if that’s the case, make sure the customers or victims aren’t all white so it doesn’t look like you’re using race to make a good-versus-bad or rich-versus-poor comparison.

You are not diversifying your cast if the only people of color in the project fit stereotypical casting descriptions like: sassy, thuggish, urban, street, hood, spicy, fiery, flamboyant, fierce, etc. Not to say that POC shouldn’t embody these types of roles, but if you can’t imagine white people in these same roles, OR if you can’t imagine POC playing any of the roles you’ve cast with white actors, you should reevaluate your script.

> You are not diversifying your cast if the only people of color in the project fit stereotypical casting descriptions like: sassy, thuggish, urban, street, hood, spicy, fiery, flamboyant, fierce, etc. ​

Please avoid tokenism, where there is only one person from a certain race and it’s their responsibility to give their opinions on behalf of that whole race. Like if most of this character’s lines start with “Well, in my hood / My crew always / When I’m with the homies, we all …,” and no one else in the movie is talking like that, reevaluate your script.

Please avoid fetishism, where a character is sexualized because of their race. Also, avoid this in life.

If you are doing an artistic representation/homage/biopic of a real person of color who lived and breathed on this planet, you should cast an actor of that same race.

—What if I can’t find an actor of that same race?

—Do your casting search again.

—What if I still can’t find anyone of that race?

—Do your casting search again.

—What if I still can’t find anyone of that race?

—I mean, I want to say do your casting search again, but if you’re really strapped for time, cast a person of color of a different race who looks like that person.

—But what if I want to cast a white person with ethnic features?

— … Did you just say ethnic features?

—Sorry, I mean, I just really like this one white actor and think they can pull it off.

—Please reexamine the reason you’re doing the project in the first place. If you are doing it to respect or honor the subject matter’s story, then casting a white person will not do that.

Let’s be open to new stories for, and from, POC. I don’t have a problem with revisiting history, but I think we can produce more narratives that aren’t about slavery or about someone fighting to be the first black ______. I definitely don’t want to overlook these stories, because they’re a part of our history and shouldn’t be forgotten, but I’d like to believe that POC in this country have created more stories since slavery and the civil-rights movement that can be expressed in present day or even in the future (like *Star Trek*!).

All right, that’s seven things. I could probably write more, but this is already getting long. And I’m sure there are things I didn’t address that apply to groups I don’t belong to, so please add it to the conversation. We all need to take part in this if we want things to change.

And if you’re an artist or someone who creates things, and after reading this you still think, *I hear you, Sasheer, but honestly diversity isn’t a priority of mine*, well, you can see yourself out, because you’re not an artist. Our work should be a reflection of society and if you’re not concerned with including all of society, then I don’t really know what you’re doing making art in the first place.

Diversity makes for better art and entertainment. You know who said that? Barack Obama. You know who doesn’t have time to talk about the hiring practices in Hollywood because he’s really busy with wars and the economy and stuff? Barack Obama. Things must be pretty bad when the president has to step in and say, “Maybe you guys should try to include everyone?” But this is a systemic issue and it’s not going to get fixed overnight, so let’s help one another make it better. OK, I’m going to go eat some M&M’s now (also, this essay is just one long ad for M&M’s).

*Sasheer Zamata is a comedian and current cast member on* Saturday Night Live.