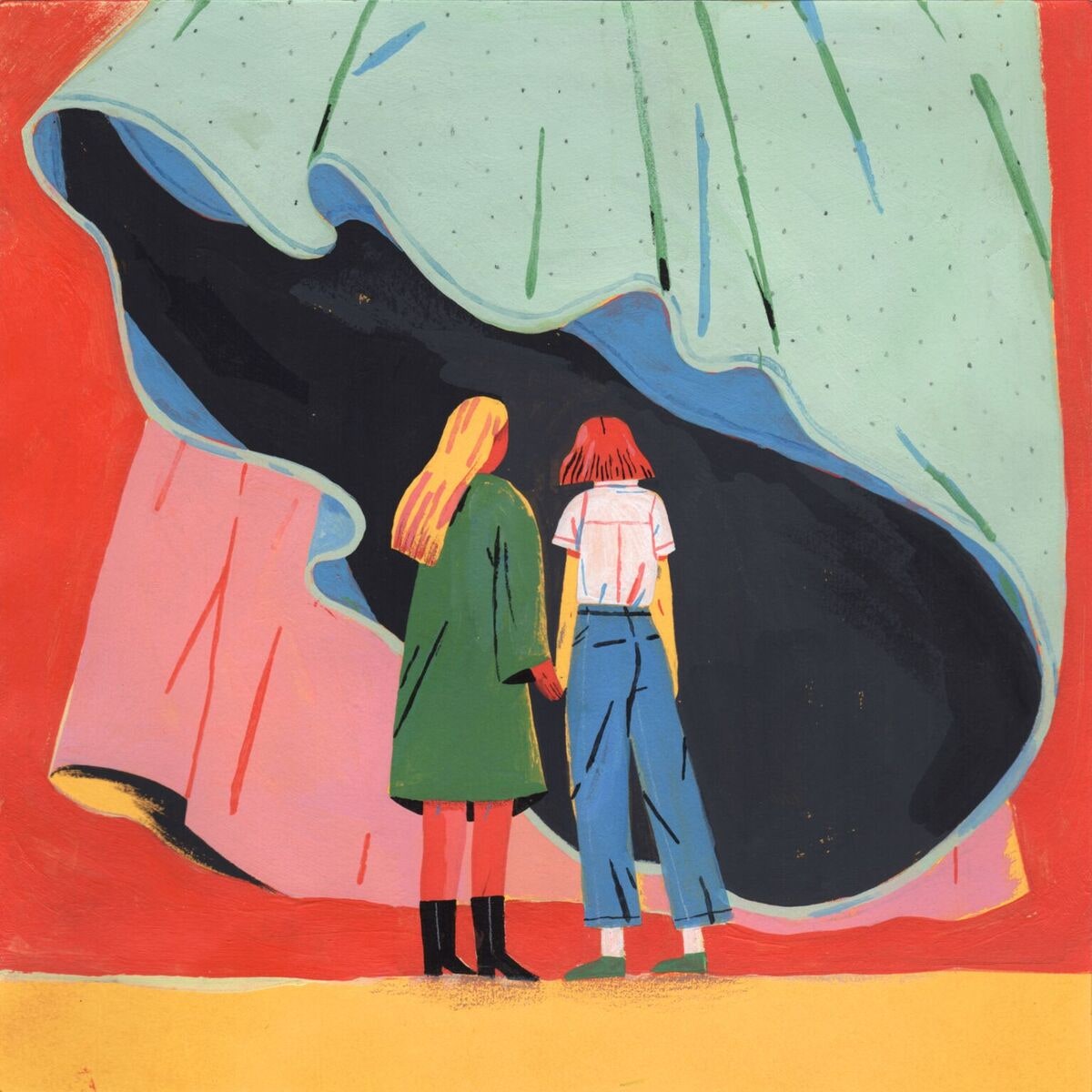 The first night I kissed a woman was clear and cold. The wind smelled of snow, and as we walked the paths of Boston’s Public Garden, the streetlights making the frost around us sparkle, we kept our hands shoved deep in our coat pockets. Her coat was a brilliant emerald green that seemed to glow in the light. It matched the color of her eyes.

That coat was the first thing I’d ever noticed about her, a week before. We’d met online but had traded no pictures. I’d done plenty of online dating but never before with another woman. She was much more experienced but knew enough to be careful with my shyness. Finally, we’d agreed to meet in a coffee shop. Leaving the train station to walk the few blocks there, I’d spotted a woman in that beautiful green coat, golden hair tumbling in waves over her shoulders. I’d never seen her before — and yet. Somehow I thought it was her. I walked to the coffee shop half-hoping, half-knowing it was her. And half-wishing it wasn’t. That my life wasn’t about to change.

But then the coffee shop door opened. And the woman in the green coat walked in.

Then, a week of coffees and drinks. Each time we’d met, I’d gotten nervous and rambled to her like a friend — then pretty much turned and ran as soon as the date, or whatever it was, was over. I hadn’t touched her. She hadn’t touched me. Just: ramble. Run. The night before, we’d finally had dinner together at a hippie-ish Tibetan place where nothing cost more than a few dollars and the wooden tables were beat up. When she sat down at the table, she’d slid her coat off her shoulders and revealed that she was wearing a silver sequin top slit down deep between her breasts. I stopped drinking my tea. I’m pretty sure I gulped. She grinned, and I got the point: we weren’t just friends. Could I please get over my nerves, already? But at the end of the night, I ran again.

Now we stood atop a little stone arched bridge in the garden. It could have belonged in a fairy tale. Might have had a billy goat beneath it. She took her hands out of her pockets and rubbed them together, then turned and faced me. Close enough that I could see how the wind had made her eyes water, her eyelashes glisten. We were going to kiss — I could feel that we were going to kiss — and though the wind rushed cold around me, time stretched.

She looked up at me. Those eyes. Then she said, “There’s something about me you should know.”

And she told me her father had sexually assaulted her. For years.

There was a time — right after the day the _Access Hollywood_ tape came out in 2016 — when it seemed like we might finally be ready to pay serious attention to the prevalence of sexual assault in this country. When it seemed like ignoring it might actually, for once, hurt someone other than those of us who live with it in our bodies.

Typing that now, though, seems almost naïve, with President Trump in the Oval Office and Clarence Thomas still sitting comfortably on the Supreme Court.

I listened to her talk. We didn’t kiss then. Mostly, I was quiet, watching her. I asked some gentle questions when it seemed like she wanted them. Afterward, we walked around the park for a long time. Eventually we did kiss, and I remember the surprise of how sweet her mouth tasted and how full her lips were — but mostly I remember her words. My quiet.

> Dating women would mean navigating the memories they carried in their bodies. And navigating how to carry mine.

Because while she spoke I realized that I’d never considered this part of dating women. That dating women — statistically radically more likely to be sexually assaulted than men — would mean navigating the memories they carried in their bodies. And navigating how to carry mine.

Was I supposed to tell her then that I, too, had been abused by a family member — in my case my grandfather?

For the ten years I’d spent in the closet, I’d worried about so many things that might happen if I came out. I’d worried about my loved ones’ reactions. I’d worried about how I’d make a family, if I couldn’t have what I’d grown up with: parents who were married, children who were biologically from both parents. Gay marriage was such an obscure idea, that when I’d told my college-thesis adviser I wanted to look at the legal theories in support of it in 2001, he’d waved off the idea. We were in New York City. He was a deeply liberal sociologist. But gay marriage? That was so fringe it sounded crazy.

So I worried about how I’d be perceived. I worried whether being out as gay would harm the legal career I had then planned. (It must, I thought. How could it not?) I even worried that if people knew I’d been abused, they would think that that was why I was gay. Like that had turned me gay. That seemed like the most horrible idea of all. That even if I grew comfortable with my desire for women, others would dismiss it as just a side effect caused by a man’s abuse. There are times, when I look back now at this list, that I’m dumbstruck by it. How afraid I was to just be who I am. What did I really think would be so bad? Yet how quickly social change would come was unthinkable then. So I worried.

But with all I worried about, I had never once worried about how I’d handle someone else’s sexual trauma. I had male friends — two I knew about — who’d been abused, but I’d never dated them. I’d never thought about why I’d avoided it — but on some level, I’d known why. The idea had seemed hopelessly complicated: Who would hold whom, if a flashback came? What if both of us had a flashback at the same time? How could that possibly feel safe?

But then I started dating women. And soon, it was impossible to avoid.

The Trump administration doesn’t lack for scandals and should-be scandals. Right now the internet is awash in tales of Harvey Weinstein’s monstrous behavior. We’re in a moment where the topic has risen sharply, and change seems possible. But I worry it will die away again in the endless ebb of our news cycle. Remember Jerry Sandusky? Nate Parker? Woody Allen? Roman Polanski? Casey Affleck? Bill Cosby?

The conversation flared and then died then, too.

Yet there are many of us — far too many of us — for whom it never really dies down. Memories live in our bodies and in our communities. When I began teaching creative writing, every term, a third of my students would self-disclose as having been abused or assaulted. (Though once, when I observed this to a class, a student approached me afterward, her face grim. “You know one-third’s just those of us who’ve told you,” she said.) (1) Forty percent of black women have been subject to “coercive sexual conduct” by age eighteen. And surveys of sexual minority populations — LGBTQ people, like me — (2).

That’s the irony: Most of us do feel alone in it. A culture that’s always moving on to the next thing, always stranding us with our experience, makes sure we do.

The woman in the green coat and I dated for months. She was my first girlfriend — but not my last. I think back over the years of dating women that have followed, and I arrive at the statistic above: yes, 40 percent.

On generous days, I want to think that some of the silence isn’t malicious. That maybe the reason the culture stops talking about it so quickly is that a lot of people can afford to. That maybe it’s just natural they stop thinking about it, if they don’t have memories that live in their body, that make their breath run cold with panic when a moment that should be pleasure becomes a memory of terror. Or if they don’t live in communities in which assault is rampant, and have to see their lover gasp with memory. They can fool themselves into thinking it’s another person’s problem. Just some poor person’s trauma.

But then I remember the statistics. (3). No matter how alone I feel sometimes, it’s not just some communities. It’s all of us.

So on my most generous days? On those days, I allow myself to hope that maybe yes, this is finally the moment. Maybe the culture is actually ready to hear us. Maybe it will catch up to what many of us have been living for years. And finally—finally—change.