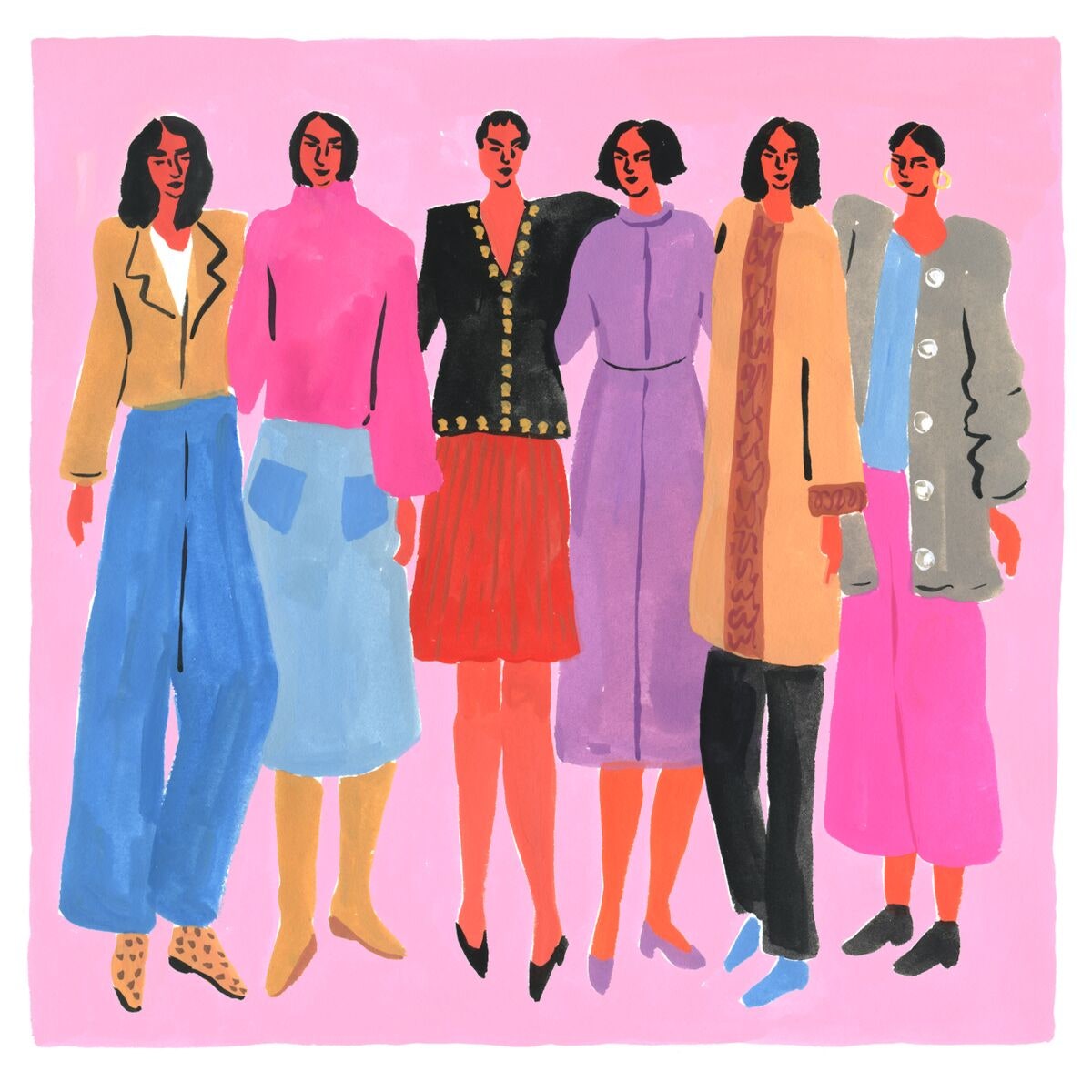 When you’re young, you spend a lot of time looking at your mom — so obviously you’re going to notice what she’s wearing. And like it or not, it’s going to influence your own style — what you love, hate, or fiercely avoid because it reminds you of being hauled in the back of the car to the dump or sent to your room for setting a “small fire.” Whether your mom was chicer than chic or forcing your family into matching Easter overalls, chances are her style had a lasting impact on you. Here’s how our moms’ styles impacted us.

**Lena Dunham** One of my earliest memories is hanging out alone on the floor of my mother’s walk-in closet. This wasn’t a fancy situation — it was homemade, the shelves weren’t painted, and it smelled like the hardware store. But I loved it. She had a lot of suits — Romeo Gigli, Kenzo, Isaac Mizrahi — things she had either bought at (3), New York’s best discount superstore, or gotten through trading her art with a designer. She’s very industrious about fashion and has somehow always been clad in fascinating things, even when she was a struggling artist who couldn’t pay for a piece of pizza in 1972.

This was the late ’80s/early ’90s, and her look was boxy and deconstructed, but with beautiful feminine accents like a vintage deco ring or bright-red lips. I loved when she wore a dress because it was rare and indicated the most special possible occasion. She’s never been one to follow a dress code, though — she will wear pants to a black-tie event or a dress to lunch. It’s one of my favorite qualities in a dresser, and I still use her informal rules to guide my journey through my own closet.

Back then her shoes were on the bottommost shelf and therefore most accessible to me. I would take them out, pair and un-pair them, and then restock the shelves for hours. We lived above a Hasidic-owned shoe store and I liked to pretend this was my very own extension of their business. As I said, Mom has always been a master of the discount, the queen of finding the perfect item at a sample sale and seeming more current than someone who could afford to go all-in at Barneys. Early on I understood that the shoes with Manolo Blahnik labels were fancy items and not to be fucked with. I liked to pet a pair of cheetah-print horsehair Chelsea boots — just pet them — but I often couldn’t resist wearing the spectator pumps to the bathroom and back, mashing my toes against the nude leather lining. One of the first luxury items I allowed myself to purchase was a pair of my own Manolos, custom ordered. I don’t wear them very often — I’m scared to scuff or hurt them — but they make me feel like a woman. Of course they do.

**Jenni Konner** I’ve always thought 32 was the most attractive age. It’s the age that my mother and her friends were when I started to understand that they were powerful, rigorous women. I was in awe of all of them. They were artists and writers and mothers who smoked cigarettes and sometimes pot and looked so comfortable in their bodies. I couldn’t wait to be 32, when my whole life was going to begin.

When I was 31, though, I was pregnant. I didn’t feel especially powerful or fierce or great in my body. I was four months pregnant and I had been flown to New York to meet advertisers because a network had ordered my first television show. I didn’t feel sexy–Chrissy Teigen–pregnant. Four months in is when you have to tell everyone you are pregnant so they don’t think you are just fat. You have to rest your hands on your belly so people don’t think you are just fat. You mainly feel fat.

It was in Barneys that I first saw the boots. Boots I had been searching for most of my adult life, though I’m not sure I knew that. They were the boots my mother had worn throughout most of the ’70s. Caramel leather, soft like a vintage football, with a wedge heel and a rise to the knee. In my memory she paired them with a long denim skirt and a magenta turtleneck sweater. If I could replicate this outfit, starting with the boots, maybe I would feel grown — instead of how I really felt, which was nowhere near adulthood.

I decided they were my gift to myself for getting a series order on a show, and my birthday present to myself as I turned 32, and I bought them. They were the most expensive shoes (or anything, really — my couch was like 400 dollars) I had ever purchased. The rest of the outfit came together eventually. Thanks to Katayone Adeli, I found a patchwork jean skirt. The sweater has taken various forms over the years. But it’s the boots that I still wear. Today, if I need to channel that strength, the boots go on. I wonder if my mother remembers hers.

**Jessica Grose** As an adult, I acknowledge that my mother is one of the most elegant women I know. She has always had a definitive sense of her own style. Minimal. Architectural. Almost severe. She was the first woman I ever saw wearing a fashion jumpsuit. She’s sported the same Madonna-circa-the-“Rain”-video haircut since approximately 1986, and she gets it trimmed, like clockwork, every four weeks. As a child, I did not appreciate any of this about her, because children can be terribly ungrateful jerk faces. I just wanted her to look like the other moms in their tapered pants and sweaters and prim bobs.

The outfit I remember of hers most vividly was a Lolita Lempicka ensemble. It was a black jacket with broad shoulders that tapered to the hip and were embellished with discreet embroidered gold shells. The jacket went with a pleated red skirt that hit above the knee. My mother wore nothing under the jacket, and even though she has no cleavage to speak of and it wasn’t even particularly low cut, I remember being scandalized by this fact and wishing she wouldn’t. This outfit stands out in my memory not just because I was scandalized, but because she wore it when she went to special events with my dad, and she always looked especially chic in it. Even as an ungrateful jerk-face child, I could see that.

**Laia Garcia** I inherited my love of fashion from my mom. At one point I think she wanted to be a fashion designer; I remember seeing her sketchbooks, and the drawings are beautiful. Now she says she doesn’t have an artistic bone in her body — she ended up studying chemistry, and then 20 years after that becoming a lawyer — but the proof is in the pudding, as they say. She was young when she had me, which meant she was always the cool mom. She had short hair, shorter than Pat Benatar’s, who she was into, but longer than Ana Torroja’s, the lead singer of (1), a band we were equally obsessed with, even though they definitely belong to her. But both women were icons of cool, and so was my mother.

There are two outfits I remember the best. She had an all-purple look, which I apparently called “super *uvita*” or “super little grape.” I think it was a purple linen dress, or maybe a suit, and she wore it with matching pumps. It was very full-on, but she pulled it off with aplomb. She wore a lot of fuchsias and purples in the ’80s, lots of printed scarves. She looked like she could be in an Antonio Lopez drawing.

My favorite time of the year was when we would go shopping for her work-Christmas-party outfit. One year, she did this exquisite white button-down blouse with huge French cuffs from Banana Republic. I imagined it was something that maybe Isabella Rossellini would’ve worn. She wore it with wide palazzo pants, I think, and she slicked her hair back with gel. I’m sure everyone else at the party stopped to gawk at her when she entered the room, they in their expected sequined or ruffled dresses, and my mom in an outfit that would’ve made Helmut Newton weak at the knees. She always committed to her look and was never afraid to stand out from the rest. What better lessons could she have taught me?

**Mikki Halpin** One of my earliest memories is of my mom coming by school for some reason (potentially I was in trouble) and someone saying to me, “Your mom is so pretty, and I love her clothes,” which I didn’t actually comprehend, but I knew it was a good thing. I felt proud, as if this halo of Being a Successfully Attractive Woman somehow extended to me. My mom was also a hard-core feminist, however, and as I got older, I realized the double meaning of this sort of compliment. Women shouldn’t be judged on their appearance, of course, and yet it is nice to hear that you have one that pleases, whether it is because you are dressing to serve heteronormative standards, to fit in with a particular tribe, or just to follow your sartorial bliss.

I’ve always been particularly obsessed with one coat my mom had in the ’70s. It predates the famous (2) but definitely would have fit right in — suede, with curly Persian lamb and brocade trim down the front and on the cuffs. It was beautiful. My mom, a small person, was even tinier back then, and I only fit into The Coat during the periods that my eating disorder led to very restrictive practices, which made it feel even more special in my (admittedly twisted) mind. I think about it a lot, about how we were going on ERA marches and reading *Ms.* but at the same time starving ourselves to wear the clothes that were expected of us. The coat sort of stands for the revolution to me — I’m looking forward to the time when our relationship with our bodies isn’t so fraught, including the drama of what to put on them.

**Dianca London** My childhood memories of my mom are inseparable from my memories of her favorite sweater. It was an oversize angora-wool-blend cardigan with shoulder pads, deep pockets, and buttons the size of silver dollars. She wore it out to run errands, layered it beneath swing trenches to attend Bible study or Wednesday-night services, and habitually draped it over her shoulders while she wrote in her journal or talked on the phone with friends at our kitchen table. It also doubled as a handkerchief used to catch the tears of my temper tantrums and as my blanket during impromptu naps induced by long car trips or failed attempts to stay up late to watch TV with my parents. Her sweater was as familiar to me as the scent of her perfume (Liz Claiborne) and the golden hue of her hoop earrings. When I was little, I wanted nothing more than to own a cardigan just like it, and now that I’m older, although I’ve found a similarly styled sweater to call my own (sans shoulder pads), I still slip into my mom’s cardigan during chilly nights while visiting my parents’ home in Pennsylvania.