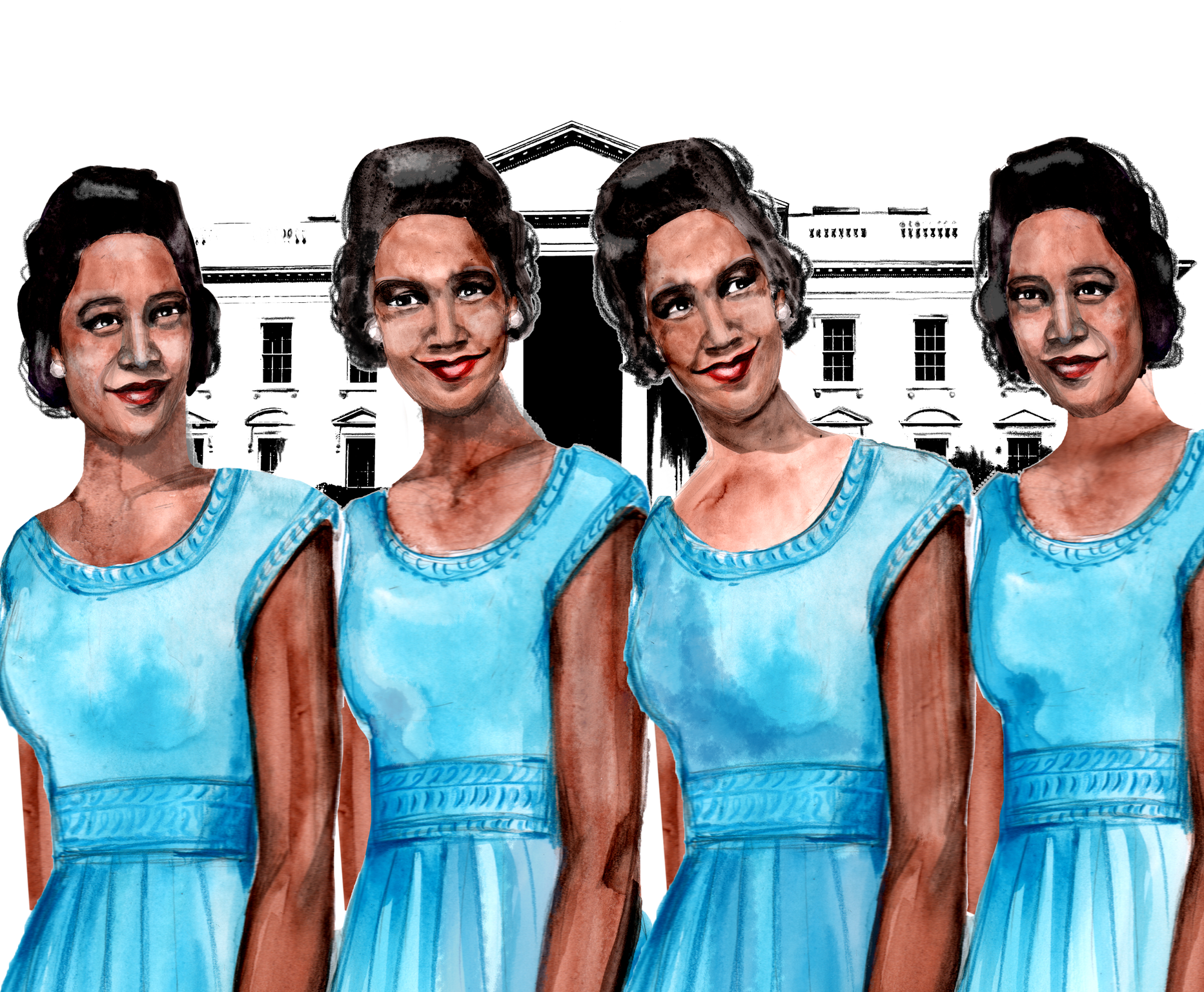 *There are so many amazing female figures from the past whose lives are under-recognized. We want to reintroduce you to some of them in a series called Out of Print. As part of Black History Month, we’re talking about the Fultz sisters, who achieved brief fame as the first black quadruplets in history.*

Milk, one of Americana’s most enduring fetishes, did not enter the iceboxes of mid-century black Americans easily. Selling it, like selling anything, required ingenious advertising, which is to say it required a convincing human story. On May 23, 1946, the Fultz quadruplets of North Carolina, born in the cramped segregated Reidsville Hospital wing called “The Basement,” supplied that gold-mine dairy narrative.

The girls were absolutely tiny, three pounds each. They’d grow up to be beautiful, slim, and light-skinned. Their mother, a 37-year-old sharecropper named Annie Mae, hadn’t had an inkling she was carrying quads. The X-ray had showed three. Mrs. Fultz and her sharecropper husband, Peter Fultz, had had enough difficulty raising the six children they already had. According to his brother, when Mr. Fultz heard the news, he grew “laconic” before fainting on the bed. Fred Klenner, the doctor who delivered the identical quadruplets, however, recovered from the shock of the delivery almost instantly, when he realized the boon he’d fallen into: the first set of identical black quadruplets in recorded history. Klenner named the newborns himself: Mary Louise, Mary Ann, Mary Alice, and Mary Catherine, after his wife and his other female relatives. While the quads gained weight under makeshift hot lights in a modest nursery, news of the historic birth spread all over the country.

Taking advantage of the Fultzes’ parents’ illiteracy, Klenner appointed himself unofficial guardian of the children. For the savvy doctor, this meant striking up a sort of “corporate adoption” arrangement with the company that offered him the best advertising deal. Dairies like “Borden and Carnation were the first to come calling, but Klenner awarded the deal to Pet, a midland dairy based in St. Louis,” according to Lorraine Ahearn, the journalist who (1) the Fultzes’ life story in 2002. Klenner received an undisclosed recurring fee in exchange for use of the girls’ image to advertise Pet’s milk and baby-formula products. The girls received a nurse, medical care, a farm on tough land in a small town in North Carolina, and a paltry monthly salary to keep them off welfare rolls. All this was agreed to before the Fultz quads left the hospital nursery.

Klenner discharged the daughters to their parents’ home when he deemed them healthy enough for commercial-image purposes. To the public, he stated: “Visitors are welcome at the home between the hours of 2 p.m. and 4 p.m. each afternoon. The quadruplets can be viewed through a glass screen.” According to their nurse and eventual adoptive mother, Elma Saylor, their parents never considered blocking the deal. “He had never made more than $500 a year in his whole life. So when Pet Milk came around with those offers, Mr. Fultz thought it was a blessing from heaven.”

That Klenner’s audacious statement recalls the language of racist freak shows underscores the exploitative nature of the Fultzes’ childhood. Well into their teens, the Fultz sisters were plastered on Pet Milk ads, placed in darling compositions. “Six Years Old and Still Growing Sturdy on Pet Milk!” read one ad, in jovial white text. The ads featuring the smiling girls, apparently healthy and strong off the Pet Milk products, became shorthand for healthfulness and fertility, even as the American government instituted welfare policies that pathologized black families. Eager to draw urban black consumers into the baby-formula and dairy markets, Pet’s years-long advertising campaign coincided with the “combination of post-war prosperity and a baby boom that resulted in more cans of Pet Milk being sold than at any other time in the company’s 65-year history,” according to Pet’s (2). Up until late adolescence, the Fultz girls were child celebrities — taking pictures with President Kennedy and doing interviews on talk shows — though they hardly ever earned more than $350 a month.

Klenner continued to grow rich off the deal, using the money to foot his two-bit medical experiments. Once the Fultz children became women, the ads stopped, and the money stream was cut off. The milk sold itself; no crop took on the farm. Parting from their longtime nurse for the first time, the girls left North Carolina to take a scholarship at Bethune-Cooke College in Florida. The whereabouts of the rest of the siblings were unknown at that point. Their parents lived on the tobacco farm until their deaths.

A 1968 article in (3) profiled the sisters as they struggled to adjust to life after fame. At the time, they lived in Peekskill, on the Hudson River Valley, after having been forced to withdraw from Bethune-Cooke in the middle of their studies. The administrators cited the “emotional problems” from being famous siblings as justification. Up north, still young at 22, the Fultz sisters assembled an amateur band in an attempt to strike it big at nightclubs. They lived with Saylor and her husband in a housing project that cost $150 a month. The girls were depicted as highly intelligent and curiously interdependent, unconcerned with boys or husbands — “The boys up here are too wild,” said Mary Louise. Her sisters were disappointed, but Mary Louise offered a final, hopeful quote for their future: “We will show everybody that the Fultz Quads can do something real big. Watch us. We’re going to be big stars.”

Fame never again came. The sisters raised families and lived in relative obscurity. Three of the four sisters eventually died of breast cancer. Mary Catherine Fultz Griffin, the sole surviving sibling, moved back to her hometown of Reidsville in 1992, where she still lives. In 2002, Ahearn, the journalist, trailed her for weeks, observing Fultz Griffin as she encountered memorabilia of the Pet campaign around Reidsville. “They turned up at flea markets or in the windows of old bookshops, scattered and out of order, like pages of a family album that lost its binding. Of course, they always had a price tag, and they always belonged to somebody else.”