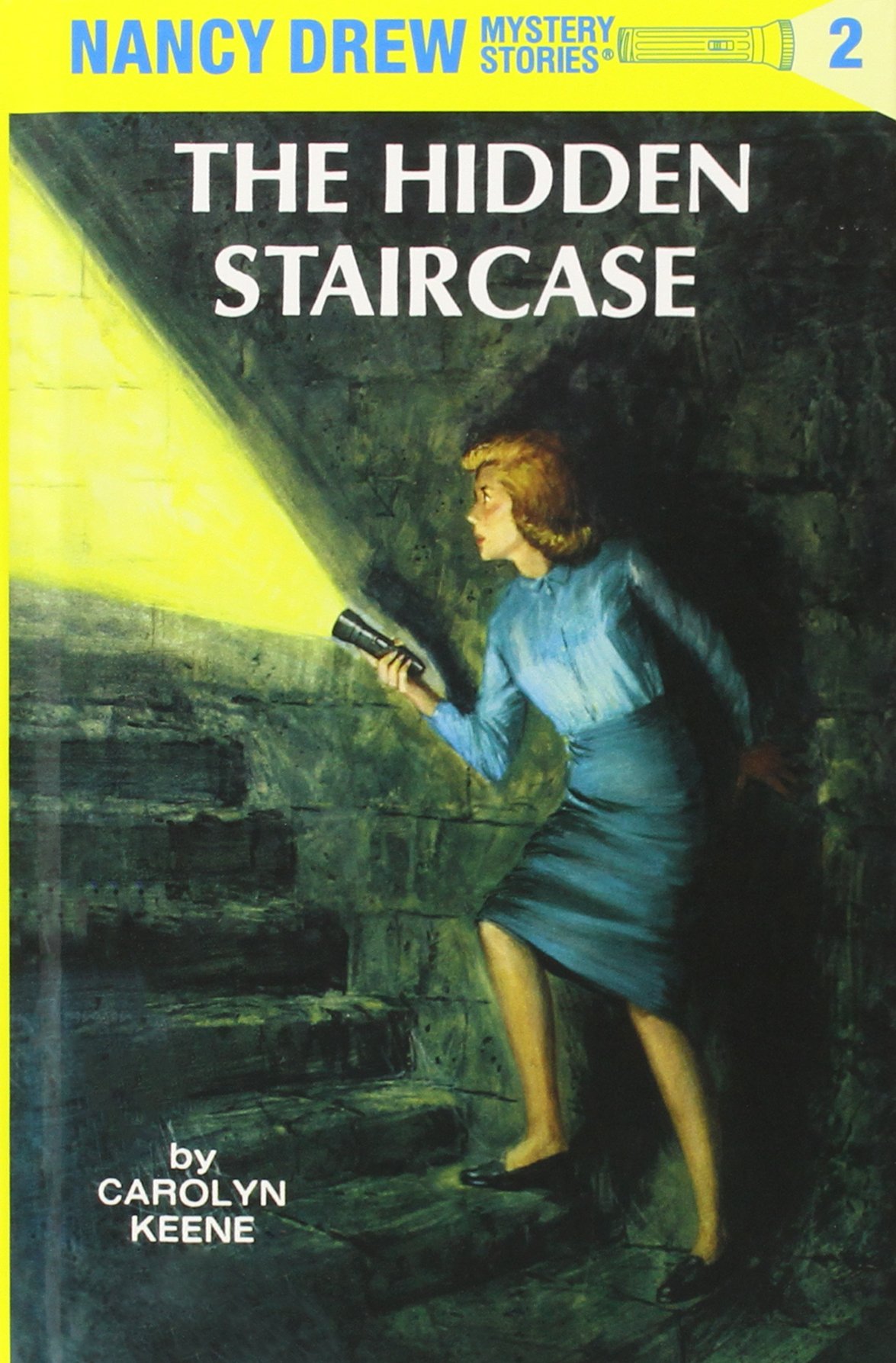 Nancy Drew feels wrongness in her gut. From the very beginning of Carolyn Keene’s novel _The Hidden Staircase,_ Nancy is led by her emotional compass. “I declare, I don’t know what makes me so nervous this afternoon!” the book begins. “I have the strangest feeling — just as though something were about to happen.” Or, at least, that’s how the book is supposed to begin.

Like so many young girls, I went through a Nancy Drew phase. For an entire summer, I checked out book after book of Nancy’s tales from the public library. But the installment I liked best was _The Hidden Staircase,_ the second book in the series. The musty, tattered book had a blue cover with an orange serif title above a silhouette of a girl peering into a magnifying glass. Inside the book was Nancy: a spunky, serious young girl who let her hunches lead her into a scary stranger’s house on a quest to fight evil.

In March, during a rough week and desperate for nostalgia, I ordered _Nancy Drew and the Hidden Staircase_ online. The story I remembered went like this: Nancy is introduced to the middle-aged Turnbull sisters who ask her to investigate their “haunted” home, where valuable objects keep going missing. After receiving a threatening letter, the brave Nancy Drew, armed with her father’s revolver, spends a week living in the Turnbull mansion. Her father gets kidnapped; Nancy sneaks into a twin mansion built on the other side of the property, finds a hidden staircase leading to a tunnel between the mansions, and saves her dad.

The book I got in the mail was newer. It had a yellow binding and an illustrated cover and was completely unfamiliar to me. At first I blamed my memory. Decades apart from a book can smooth it over, rewriting the story in your mind with rose-colored glasses into something it never was in the first place. But the further I got into my new copy, the more I felt that hunch Nancy taught me about. Something was not right.

In this book, Nancy goes on a prom date, her friend gets engaged, and instead of sneaking into the neighboring mansion with only her revolver and her gumption, Nancy gets a key to the house from a realtor.

I ordered an early edition of _The Hidden Staircase._ It arrived as the book I remembered. Both books are titled _Nancy Drew and the Hidden Staircase._ Both are the second book in the Nancy Drew series. Carolyn Keene is named as the author of both. But they are entirely different books. The chapters have different titles. The books include different characters. Even Nancy’s behavior is different. And that’s because two different women wrote them in very different decades with different ideas of what girlhood should look like. But you’d never know just looking at them.

The first copies of the Nancy Drew series, like the ones I read as a child, were published in 1930. Edward Stratemeyer, a prolific publisher of children’s literature, decided to commission the series because he had seen great success selling off mystery novels to young boys. He hired Mildred Wirt to write the Nancy Drew novels under the pseudonym Carolyn Keene. Wirt was an ambitious woman in her early 20s who said she despised the “boring and namby pamby” books for girls that she had grown up reading.

Wirt was writing just on the heels of the Roaring 20s, and she invented a heroine to match. Wirt’s Nancy Drew was assertive, aggressive, and willing to contradict any adult who kept her from solving mysteries. Through the character, Wirt was doing what all young American women in the 1930s were trying to do: bridge Victorian and modern sensibilities about what a girl (and a woman) could be. In her books, Nancy drove a car; she existed in a public sphere. Women in the First World War had directed movies, flown airplanes, and been newspaper reporters. Nancy Drew, a self-sufficient girl detective, was a book those modern women could buy proudly for their daughters.

And she was an immediate success. In 1932, _Publisher’s Weekly_ wrote that the Drew titles were “the top notch sellers of the many bestseller juvenile series.” They even outsold boys’ books.

Wirt wrote 23 of the first 30 volumes in the original series, but she stopped writing for the publishing company in the early 1950s, after which Nancy Drew just became a template for the visions of other ghostwriters. A woman named Harriet S. Adams, the daughter of the publisher who had hired Wirt, took over Nancy Drew and reworked her a little. An article for _Hiram Magazine,_ published in 1988, quotes Wirt saying, “Mrs. Adams was an entirely different person — she was more cultured and refined. I was a rough and tumble newspaper person … We just had two different Nancys.” Adams considered Wirt’s Nancy to be “too bossy, too positive,” and she replaced her with a more docile, less autonomous protagonist.

There’s nothing wrong with Adams’s version of the Nancy Drew novels. Despite being toned down, Nancy Drew remained a capable and almost unbelievably accomplished heroine. But if Wirt wrote a Nancy Drew of and for the women of the 1930s, Adams wrote her Nancy for the 1950s, when post-war American culture encouraged docility, sweetness, and deference. When Nancy Drew debuted in 1930, 46 percent of US college students were women. By the time she was rewritten in 1959, women made up only 38 percent of college students. The post-war prosperity sent the 1950s woman out of the office place and back into domesticity, and Nancy Drew went with her.

Harriet S. Adams now controlled not only Nancy’s future, but also her past. In 1959 the publishing house launched a project to update the earlier books for a generation of new readers. In some ways these “cut downs” were good: they shortened a few of the original books and cut any sections that dealt with race poorly, and they slapped new illustrated covers on the front.

But in some cases, where Wirt’s Nancy was a little too bold, or a little too difficult, or a little too autonomous, those “cut downs” actually became complete rewrites. That’s why today, if you walk into a bookstore and pick up an early Nancy Drew title, you’ll find a book with a 1930s copyright, and it will be impossible to tell whether it’s been cut down or completely rewritten.

_Nancy Drew and the Hidden Staircase_ showcased too many features that Adams just didn’t think were acceptable anymore, and so Nancy was cleaned up and pared down. Adams’s version of the book is still thrilling and fast-paced, and Nancy still leads it. But the heroine isn’t my Nancy Drew. And she’s not the Nancy Drew who hundreds of thousands of women grew up with. The Nancy Drew who was self-reliant, brilliant, and even a little bit mouthy was the one who inspired me, who taught me that being a girl wasn’t a handicap — it was an advantage. That Nancy is buried in used bookstores and old garages — out of print, and almost entirely out of mind.

_Kelsey McKinney is an avid reader and a culture reporter for Fusion._

__This article was created in partnership with Search Party, which premieres on TBS on 11/21. (1)__