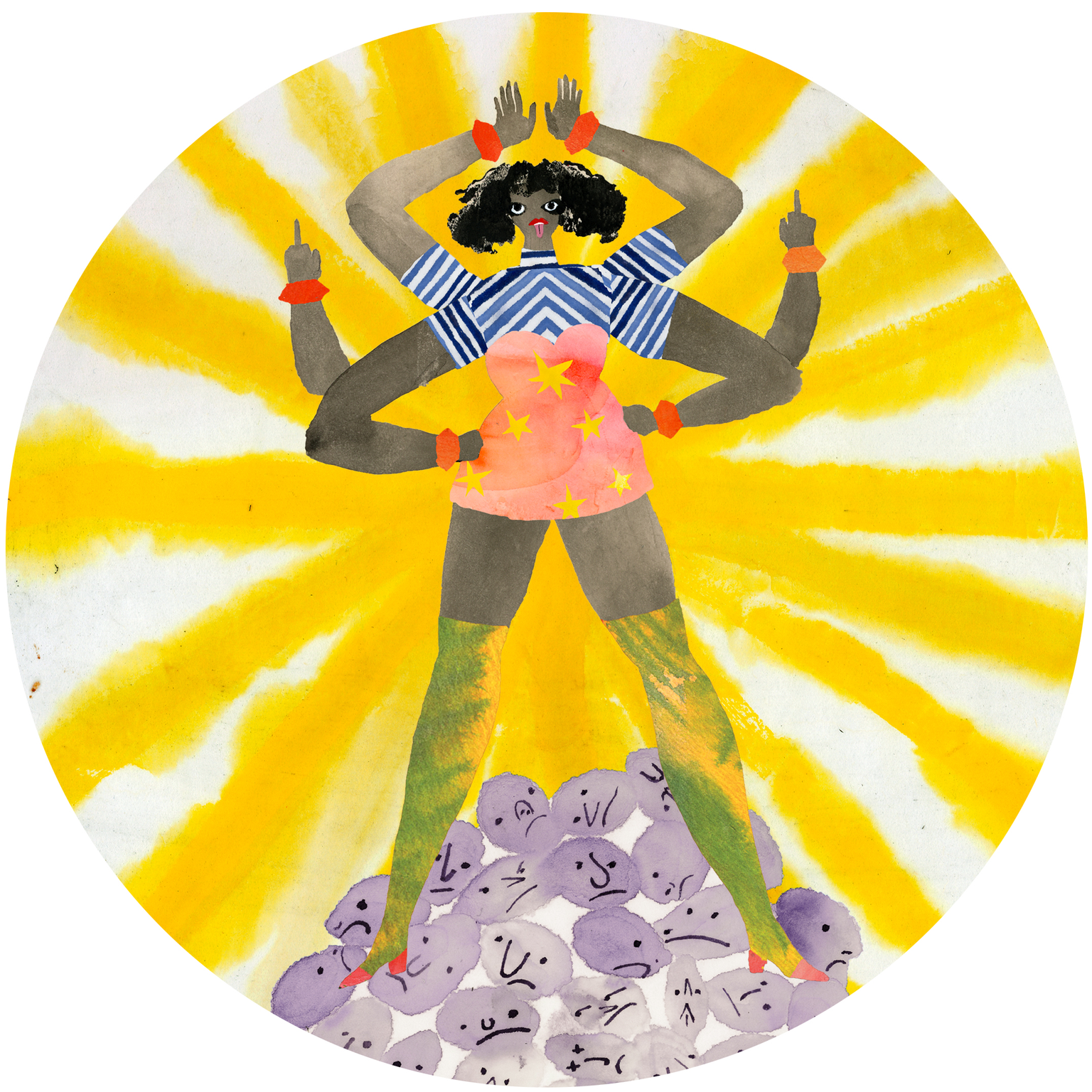 I spent a summer in New York during college living in a neighborhood called Borough Park, in Brooklyn. That’s when I had the immense pleasure of getting my first (so far only, but let’s not jinx it) urinary-tract infection. As far as I understand it, you get a UTI from not peeing after sex or not drinking enough cranberry juice, which made it absurd that I would get one, because I’ve done those two things simultaneously. I was furious at my urinary tract, and it was furious at me. This angry standoff went on for days. Not even a friend’s insistence on calling me a “cutie with a ‘uti” helped to improve my sour mood. After a fifth night of agony, I headed down to the emergency room.

The emergency room was a nightmare on a level that would’ve made Dante go “holy shit.” Maybe almost a hundred people in a big open room. Beds were pushed so close together I could hear the woman next to me quietly praying in what I think was Armenian. I waited *six hours* to get painkillers or antibiotics, during which time my phone died and I learned far too much intimate detail about my neighbor’s small intestine.

And then it got worse. When I finally got the routine antibiotics I needed, gathered my hospital-issued bag, and started to trundle off to the bathroom to change out of my paper gown, a man sitting near the bed next to mine got up and *snatched the bag out of my hand.* My own clothes. Out of my own hand. My own black hand.

I was stunned for a moment while he *rifled through it.* Apparently, the hospital issued us all the same bag for our clothes, a fact you could easily look around and see because we were all trapped together in this windowless hellhole. Yet he was convinced I had stolen his sick grandmother’s clothing. Satisfied after picking through my undergarments, he muttered an apology before thrusting my clothes back at me. I went into the bathroom and promptly burst into tears.

> I went into the bathroom and promptly burst into tears.

What made that experience the particular worst was not having space or any ownership. I was half-naked, stacked nearly on top of other people in a strange part of town. I was stripped of everything that I owned and then when I finally managed to collect my stuff, someone immediately assumed I stole it. I felt personally humiliated on a level that took me back to the not-so-distant past.

I have strong feelings about space and things. At the worst times in my life, I haven’t had a lot of either, and I think that’s true for most people. People need space. People need to feel like they have some semblance of control over their environment. People need a place to belong.

I’ve often found myself in places where my presence is unusual, unwelcome, and occasionally even unprecedented. There’s Wisconsin, where I was born and where I grew up excelling in math and science, which often made me “the fly in the milk” of all my lily-white advanced STEM classes. Not to mention that I was/am a girl. Have you ever had a male teacher kiss you on the head for getting a good grade? I have! It’s about as fun and totally appropriate as it sounds. On top of that, my family moved around a lot, which made me feel rootless and insecure wherever I was, hyperaware of my surroundings, constantly putting my back against the wall so nothing and no one could sneak up on me.

> I’ve often found myself in places where my presence is unusual, unwelcome, and occasionally even unprecedented.

Then came Harvard. No sweat, right? Time to get my back off the wall! I’ll walk in there like I own it! Put my feet up on the couch where Mark Zuckerberg sat! Debate famous professors! Pretend I know what anthropology is! Act like a fuckin’ Obama, damn it!

This is what I told myself I would do.

I did no such thing.

Instead, I sat on the floor. A lot. I didn’t have much furniture my freshman year. In my own head, I crawled around Harvard on my knees just trying to find a little corner where I didn’t feel massively uncomfortable. I wasn’t supposed to be there. This is not my place. These aren’t my things. That’s just how it is and how it always will be.

I applied to the *Lampoon,* the 140-year-old humor magazine known for graduates like Conan O’Brien and B.J. Novak, looking for a place to be. I also was looking to prove to myself that I could earn some space, even at Harvard. It took a long time to feel comfortable even after I got on staff, even after I became president. One great incident involved myself and the former vice president Eleanor Parker meeting a male alum shortly after our election. It was the first time two women have simultaneously held the positions Eleanor and I occupied. He looked us up and down before remarking, with all sincere concern, “Well, it’ll be difficult handling the finances of the place,” as though this were 1950. Fun fact: I got my degree in economics. Parker got hers in organismic and evolutionary biology. I think our lady brains can more than handle a couple of spreadsheets.

Becoming president of an organization that old was surreal and gave me a weird high I can attribute only to a sense of ownership. Finally, after so much struggle and occasional bigoted remarks, I belonged somewhere. I could take my back off the wall and just have fun. I could make people leave if they made my place unsafe. And as I listen to the conversations about Harvard’s (1), potentially squashing all of final-club and Greek life, all I keep thinking about is space. Does this give more space to more people? Will this help people feel like they belong? Or does it just destroy the few spaces that exist at all, sweeping under the rug a bigger issue?

> Finally, after so much struggle and occasional bigoted remarks, I belonged somewhere.

I graduated last year and moved to Los Angeles to write for the latest season of HBO’s *Veep.* I have my own place here. I recently started writing for *Brooklyn Nine-Nine.* I have a seat at a writer’s table. I direct! I call the shots on my set! I have a nice big room, a room my boyfriend will be moving into soon, a development that wouldn’t be possible if I didn’t feel so secure. Now that I belong in a space, all I want to do is share it with people I care about. Share the space and share that feeling.

And so I am here. And where I am is mine. I’m not going to crawl through a doggy door with my head down; I’m going to stroll through the front gate, and then once I get inside I’m gonna install one of those badass wheelchair open-button things that make you feel like a wizard. You, a guest, will support me or get the fuck out of my internal/external house. You will not snatch my hospital bag of clothes or my seat at the table or my dignity from me, because this, all of this, all of my life, all that I claim, is mine. I own it. I’ve earned it. And nobody can take it from me. Not without one hell of a fight.

*Alexis Wilkinson is a comedy writer and director who lives in Los Angeles.*