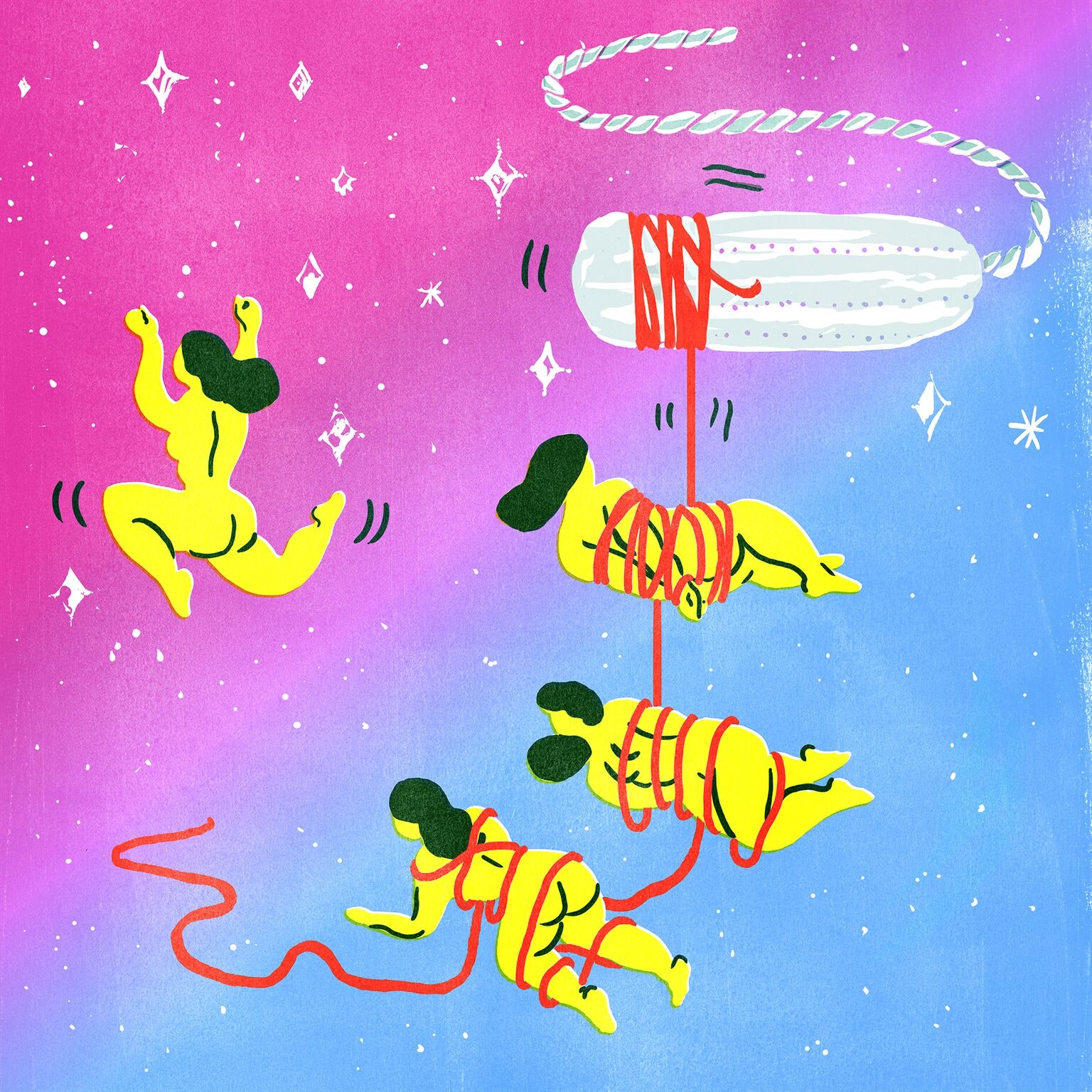 On the first day of 2015, lawyer Jennifer Weiss-Wolf dressed as Wonder Woman and submerged herself in the ice-cold Atlantic as part of an annual invigoration ritual with friends. It shook her spirit, as intended, but not with nearly the force she would meet that night while uploading pictures of her costume to Facebook, where Weiss-Wolf noticed a post from sisters named Emma and Quinn Joy. They were collecting menstrual products for a food pantry in her New Jersey community.

“A lifetime of reproductive-rights and women’s-health advocacy, and I swear, I’d never given a second thought to periods as part of policy activism,” Weiss-Wolf, 48, said. She took to a search engine and discovered that in the United States, most states tax menstrual products as luxury items, creating a disadvantage for low-income women that reinforces period stigma.

Legislators and journalists before her who had noticed damaging economic effects of the “tampon tax” and attempted to call out the injustice had met with little success. Ten years prior, Suzi Oppenheimer of the New York State Senate had tried to introduce menstrual-product sales-tax legislation that saw no real pickup. _Guardian_ columnist Jessica Valenti had (4) for free tampons in August 2014 and in turn received (5) imaginable.

Weiss-Wolf kicked her research into high gear. At the end of January 2015, she wrote (1) on Nick Kristof’s _New York Times_ blog. In the surrounding weeks, Al-Jazeera featured a story about (6), and _The Nation_ (2) about reproductive health in the NYC prison system. Then, in April, a woman named Kiran Gandhi purposely eschewed a tampon to run the London Marathon and finished the race with blood streaming down her legs. Attention to the issue blossomed, with some strategic help.

A menstrual-mad Weiss-Wolf crafted a petition, aligned with media to put tampons on (11), and collaborated with lawmakers to push policy change, producing what became known as ” (7)” with help from a handful of international activists. Since that cold swim two years ago on New Year’s Day, she’s advised Gloria Steinem, Hillary Clinton, and the White House about the issue. So far in 2017, eight states have tampon-tax bills introduced or in the works. _Periods Gone Public,_ (12) about the rise of the menstrual equity movement, is expected in September. She just launched a nonprofit, Period Equity, and the organization’s art and design work was done pro bono by the (3).

For Lenny, Weiss-Wolf detailed her journey from a park bench in Brooklyn on an overcast day.

**Alli Maloney:** Why are periods having a media moment?

**Jennifer Weiss-Wolf:** What really kicked this off was (14). She’s a young Indian-American woman ran the London Marathon free-bleeding as a matter of practicality. She woke up that morning, had her period, and seemed to be the safest way to run. She wrote a blog about it, and it went viral.

As I’ve been doing my research, I’m finding there are lots of ways periods infiltrated the public discussion that just didn’t catch on. In 2015, this chorus of voices — whether it was writers, reporters, hashtag activists, bold in-person activists doing fairly rebellious things — converged. We all do now, but none of us knew each other at the time.

It’s hard to put the words _great_ and _Donald Trump_ together, other than his own saying, but made (15) about Megyn Kelly bleeding out of “her wherever” when he didn’t like her line of questioning about his history of sexism during a debate. That became the catalyzing force of the media’s real willingness to talk about it. We had already coalesced enough at that point that we were able to take advantage of it as if we were this joined force.

It was a good idea whose time has come. Why 2015? Whether swimming as Wonder Woman had anything to do with it, I don’t know.

**AM:** When you noticed the unjust “tampon tax” laws, you started (16) and persuaded _Cosmopolitan_ to cosponsor, then ensured that it caught the attention of policy-makers. When the coverage wasn’t there, you wrote op-eds. What’s the boldest move you’ve made?

**JW:** It’s all equally bold and pragmatic at the exact same time. I’m at this great age of 48, where I’m old enough to not have a whole lot of pride. I don’t worry too much about what other people are thinking.

I’m a lawyer by day (13) that’s affiliated with NYU Law School. We focus on achieving legal change through a combination of policy advocacy, legal advocacy, and litigation, and elevating public dialogue. I started thinking very carefully about why there wasn’t a policy agenda focused on managing menstruation. Anybody who is low-income or vulnerable, whether they’re homeless at the moment, or incarcerated, or relying on public benefits, how could it be that we’re not thinking of menstruation as part of their reality when we’re making policies and laws?

I thought to myself, _Who needs to read this?_ I decided that was _New York Times_ columnist Nick Kristof.

I sent to him cold and was thrilled to get a response that he’d be willing to publish my essay. I ended up publishing (8) with him that year. I kept writing about it. I’m not, or was not at the time, a professional writer. I guess when you start with Kristof, people take you a little seriously, like you’re a writer. The bold things that I’ve done are just to assume that this idea is good enough and important enough, that there’s nobody too important to be asked about it.

Fifteen states introduced “tampon tax” legislation in 2016. Three actually saw it through. Four passed it. California passed it, too, but vetoed] (9) by the governor.

**AM:** _Menstrual equity_ is a phrase that (10) that’s now repeated by the media and Congress. It goes beyond the cost of sanitary pads and period-shaming. What is it and why is it critical?

**JW:** The ability to participate in society for people who menstruate necessitates that they have the products they need to manage it. You can’t be a productive student if you’re sitting in class, either bleeding on your chair or worrying that you’re bleeding on your chair. You can’t go to work if you’re bleeding down your legs. You can’t walk down the street. If we acknowledged the reality of women’s bodies, we might actually have different ways of doing things, including our policies. We make value statements with the laws that we pass.

**AM** : When leaders call asking for your advice on menstrual equity, what do they want to learn?

**JW:** They really want to know what’s the most effective way to talk about it, the least polarizing way. In doing this, nobody’s looking to be a crowd shocker who’s throwing tampons across the legislature floor — they’re looking to actually educate. They’re going out on a limb in doing so. It shouldn’t be that in 2016 talking about something as old and natural as periods is like a big fuckin’ deal, but yet it never happens, right? It’s partly because women haven’t been at the table, making the rules.

**AM:** You said this activism has made you a “whole woman.” What did you mean by that?

**JW:** It’s not like something I’d been sitting on for a lot of years and wondering about; it hit me like a ton of bricks. It was this Facebook flyer. Ever since that day I haven’t been able to stop thinking about it. For me, it’s actually just understanding enough about how the political process works that I can combine the skills that I have, that are true to myself, to make a change.

It’s changed everything for me. It’s not just this newfound confidence in what I think it takes to advance policy change, but now it’s the knowledge that it works. I can share this message with others and they can join. I have two daughters, and it’s changed their willingness and openness to think about their own menstruation in their lives, in their friends’ lives. It’s made them see that anyone can be a part of the change process. Again, it’s not one person making change. They just saw me do all this shit and thought, _Oh, I can do that too_.

_Alli Maloney is a writer._