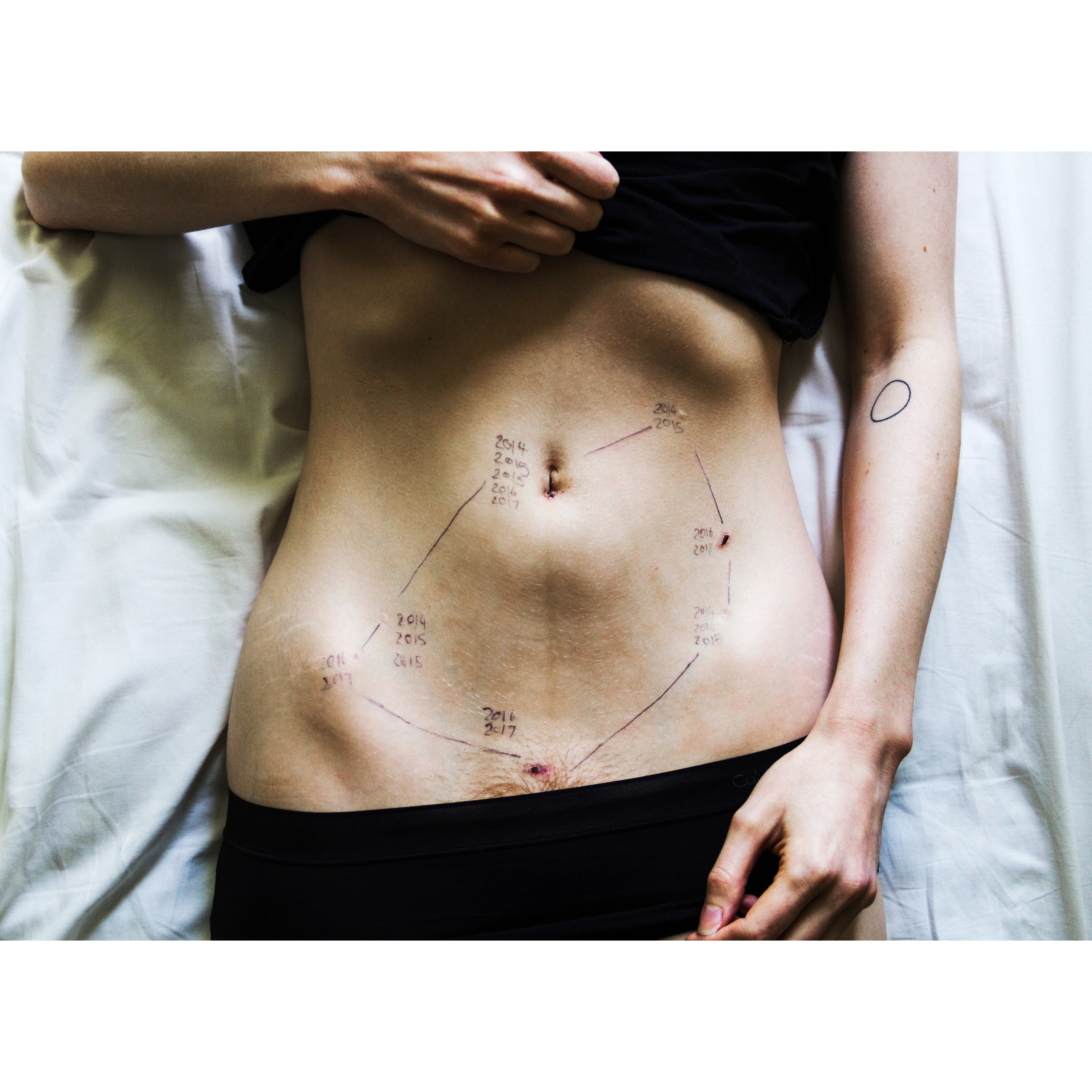 Georgie Wileman, an England-born, New York–based photographer, is tearing the façade off endometriosis. Her severe pain began when she was thirteen, but Georgie wasn’t diagnosed until she was 26. Her case isn’t unique; from onset of symptoms, endometriosis takes on average eight to ten years to diagnose.

One in ten women and trans men endure this crippling, misunderstood disease. In the past three years, Georgie’s life has been consumed by six operations — her body reeling from unrelenting pain.

But she refuses to suffer in silence. Often dubbed the “invisible disease,” endometriosis is a gynecological disorder where lesions similar to the lining of the uterus grow elsewhere in the body, repeatedly bleeding, scarring, and fusing internal organs. Symptoms are usually worse during one’s period, often causing pain and contractions similar to labor. Cruelly, this disease is also a leading cause of infertility, something Lenny’s co-founder Lena Dunham (6).

“There’s just so much to this disease that goes unseen and misunderstood, and we need to address that because this is a disease that can completely disable someone — it can take parts of your bowel, it can mess up your reproductive system, it can grow in your lungs. I’ve met women who have collapsed lungs during their period. I’ve met a woman who had lesions in her nose and had nosebleeds during her period. This is rare. But none of this seems to be known by a vast amount of doctors.

There is so little understanding of things like the health impact of not being able to eat or digest food properly; they don’t realize the effect it can have on the immune system, often causing repeated infections. The fatigue can sometimes restricting people to a wheelchair; there can be issues with adhesions that cause pain.

I’ve had strangers bless me in the street or ask to pray for me. My neighbor thought I was terminally ill. This disease is madness.”

Presently, this madness is portrayed online by makeup-clad models with slightly squinted eyes, holding their gut as if they have mild indigestion.

Wileman knows that’s bullshit. Using photography, she’s on a mission to reinvent endometriosis representation. Her series *ENDOMETRIOSIS* uses cuttingly honest images to expose what this illness looks like. Given her recent immobility, this series primarily documents Wileman’s own experience — though she says she prefers “to be behind the lens, not in front of it.”

She’s presently expanding the series into a book to document the extent of this disease’s impact. It’s often believed to predominantly affect childless white women in their 30s; solely because this demographic often has the wealth, resources, and privilege to pursue their diagnoses. “Endometriosis affects one in ten born with a uterus, across race and gender identity. I want my work to represent that.”

Wileman’s full series is available (1). In the captions below, she unpacks the vision behind nine of her most iconic photographs.

I had the circular tattoo done my arm after my fourth surgery (*top image*). I was struggling emotionally, and to me, the circle represented continuation, and the continuation of life. What followed were two more operations within a year, adding three more scars to my abdomen. Unfortunately, this is often the way with endometriosis — it’s a ruthless, unrelenting, exhausting disease.

The physical pose here is dictated entirely by pain. I can lie only on my left side. Labor-like contractions pull my knees to chest. The pain is blinding, constant. It grits your teeth and twists your hands. Shock and detachment pull you in and out of your reality. You feel as if you understand what it is to die.

This image is titled *YOU CAN GET DRESSED NOW*. Being left alone in a room with blinds drawn to get dressed after an invasive and painful exam becomes almost regular in the treatment of endometriosis. There is a continual breach of your body and boundaries in each appointment and operation, a gradual sense of detachment from the skin you live in.

Throughout the relentless treatment of endometriosis, there are times of hesitant hope, of relief. We often have to fight for months or years for the surgical intervention we desperately need. The parallel shown in this picture was important to me. The brutality of the bandaged and glued incisions. Dappled heat-pad burns rising to meet cuts in skin, made to remove disease beneath. Abdomen enlarged, having been filled with air during surgery for better access to my organs. The recent surgery hinted to again by orange antiseptic across my ribs. The almost-peaceful placement of hands and open mouth soften the image, and hint toward the complexity of what endometriosis really means.

My experience of the medical community until recently involved raised eyebrows, misdiagnoses, and allegations. I’ve been called a prima donna, a liar, a drug addict.

I tried to advocate for my health care, but in every appointment, sitting across from doctors and specialists, I choked at the thought that they didn’t believe me. I downplayed my pain. I smiled through doctor’s appointments while squirming in chairs, abdomen stretched and distended. I joked with ambulance teams while they peeled me off pavements. I still do. I can’t bear anyone believing I am playing into this — that this is what I want.

Sometimes it’s effective to remove the subject from the frame and show the space they’ve left behind. This was where I lived for nine months, during this most recent stint of being homebound. As a photographer, I’m drawn to light. Even in the most desperate of times, I can’t help but see the sad beauty in the day-to-day of what I live.

Endometriosis is a cruel disease. It swells your stomach, makes you walk, sit, hold yourself as if you’re pregnant. It causes labor contractions, forces you into maternity clothes, and requires regular ultrasounds. And yet it is a leading cause of infertility.

I once held my partner’s hand in a room lit by a sonogram screen as it was confirmed I have (2), the disease that would eventually take my uterus. The parallel of what this moment could have been was bitterly present.

I was pushed to get pregnant by gynecologists, who falsely believed pregnancy would cure endometriosis. I later pleaded in words and on paper for the hysterectomy I knew I needed for adenomyosis. I was forced to reiterate to strangers in scrubs that I would adopt children and love them as my flesh and blood — all before I’d been able to say goodbye to those children I was losing.

When you begin to document yourself, you start to notice things you would in a subject. Behaviors and habits that reveal a part of themselves they didn’t know they were disclosing. I wanted to show these details in myself that exposed this disease. I have always twisted my hands when in pain, distorted my fingers or pushed fingernails into my palms. Grabbing the sheet on an ER bed was something I felt was important to include. It’s an image I’ve witnessed on repeat.

This portrait was taken on the day it was decided I needed a fifth surgery. My fourth was an excision surgery (the “gold standard” treatment for endometriosis), an operation I hoped would be my last.

*This story was supported by the journalism non-profit the (3).*

G*eorgie Wileman is a British photographer based in Brooklyn. Georgie’s work has been exhibited in London and LA and published internationally. Instagram: (5)*