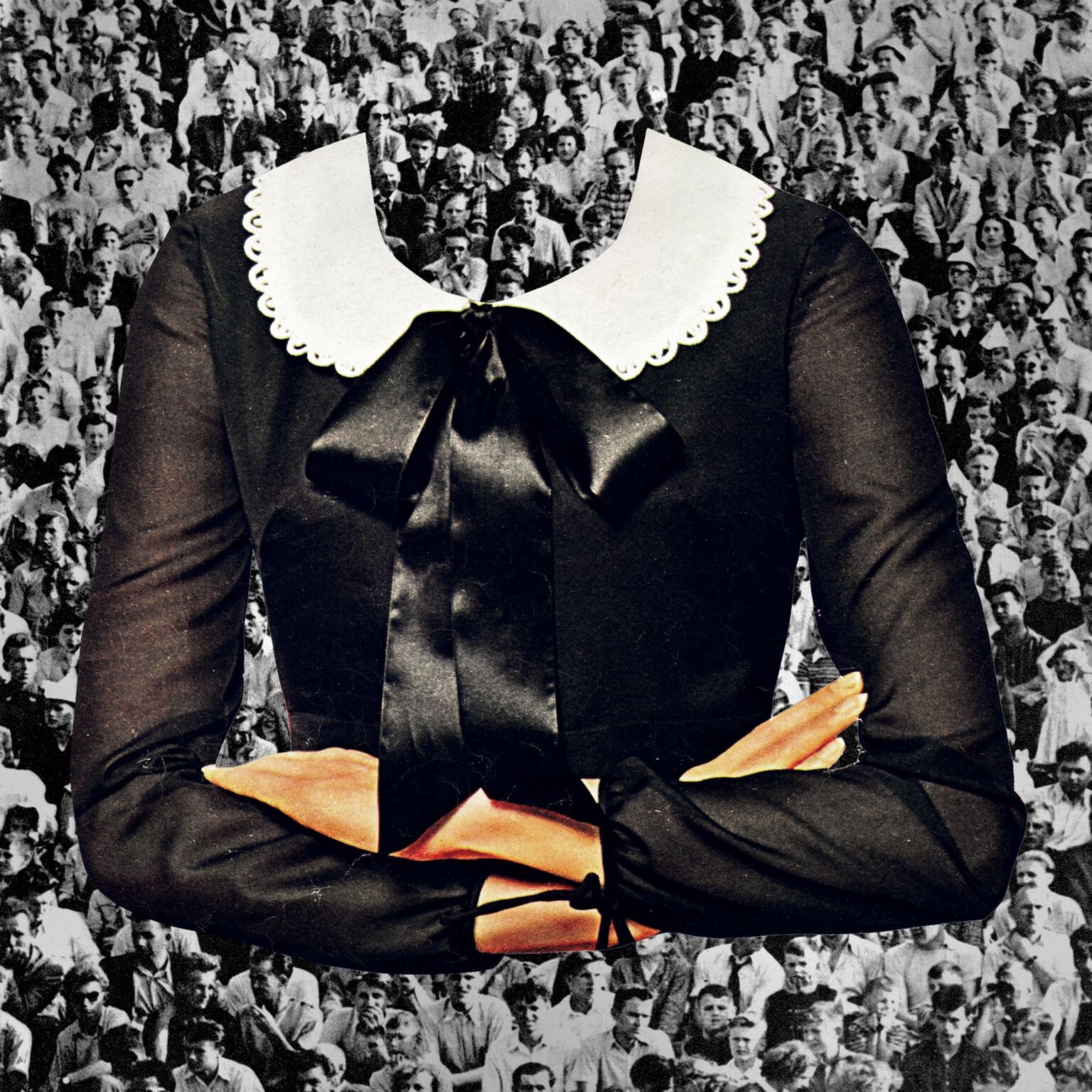 The last time I saw Agnieszka Guzdek, we weren’t quite teenagers. It was summertime in Michigan, and we were sitting on my carpeted bedroom floor, listening to Boyz II Men cassette tapes, eating gummy worms, and playing with the kittens my cat had just birthed. Aga was visiting from Krakow, Poland. I call her my cousin, even though we’re not really blood-related. Our mothers were college roommates at Poland’s prestigious Jagiellonian University (which is like the Harvard of Poland), and they have been close ever since.

In the 1970s, my mother emigrated from Krakow to the United States. She had her master’s degree in physics but didn’t speak a word of English, so she worked as a cleaning lady in Chicago before teaching herself the language by watching American soap operas. (Her English now is correspondingly dramatic.) Aga’s mother went on to become dean of molecular biology at Jagiellonian and has since retired.

I currently live on a tiny island off the coast of Portland, Maine. Aga lives in Krakow, the second-largest city in Poland. We both have children — mine are under the age of four; Aga’s son, Marek, is eighteen. Both Aga and I are working mothers, just like our mothers, and we are raising our children to be feminists, just as our mothers did. That’s why when Aga told me that on October 3, she and Marek took to the streets to protest Poland’s recently proposed anti-abortion ban, I wasn’t surprised. Invigorated, yes. But not surprised. Because if I know anything about Polish women, it’s that we are stalwart, we have large heads and big brains, we are peasant-shaped, and we do not take shit from anybody, especially when it comes to our freedom.

Some are calling it the “Coat Hanger Rebellion”; others are calling it “Poland’s Black Protests” — Aga and Marek joined tens of thousands of black-clad women, men, and children in a massive show of defiance against Poland’s conservative government and all-powerful Catholic Church after a bill was introduced to the parliament that would forbid abortion in almost all circumstances. Under the original proposed law, written by a pro-life group, women in the country of 38 million people who undergo an abortion could also face imprisonment, as could doctors and nurses involved. If this proposed law had passed, Poland — which already bans abortion except in cases of rape, incest, and severe fetal abnormalities, or when the mother’s life is at risk — would have had among the most restrictive abortion laws in the European Union.

But the protests have already had a dramatic impact. The ruling political party (PiS) that had championed the law has (5). On October 5, (6) “caused us to think and taught us humility.”

Still: PiS shows no signs of liberalizing the currently draconian abortion laws and reportedly would still like to ban abortions for women whose fetuses have congenital abnormalities. According to the _Guardian,_ activists say that protests will continue. And according to Aga, “I feel that women know that we have won for now, but this war is not over.”

I spoke with Aga — who wants to make clear that she is speaking for herself, not for any organization — about these rallies in the motherland, and here’s what went down. (And thank you, Aga, not only for your activism, but for staying up so late to talk to me in my time zone …)

**Mira Ptacin:** Can you tell me about the situation regarding women’s reproductive rights in Poland right now?

**Agnieszka Guzdek:** Women in Poland have been given the impression that we have reproductive rights, even though we have some of the most strict abortion laws in the European Union. These laws say that abortion is permissible in three cases: if the pregnancy is a threat to a woman’s health or life, if the pregnancy is a result of a rape or incest, or if the fetus has lethal defects and will not survive outside the woman’s body. This is the law, but reality looks different. All of us have heard stories about women who learned from prenatal testing that her fetus would not survive outside the woman’s body, or its life would be short and painful. Still, those women have to fight for their rights, or change doctors, or find a special hospital to seek help. Sometimes it is too late, sometimes it is unbearable, sometimes it leaves women traumatized for life. I’ve heard of many stories like that.

You have to understand that our protest on October 3 was not in favor of abortion, as much of the pro-government Polish media tries to describe it. Never. None of us thought that. Our protest was for a choice, for life. We are fighting for fundamental human rights. Our protest was really a strike, modeled (8). The date was chosen, and most of us heard about it from Facebook and other social-media tools. _We are going on strike!_

In the beginning, all the groups had the keyword _women_ in their description. But we realized that this is not only about women’s lives. Everybody joined in. _Everybody._ For me, the most emotional, proud moment of this event was when my eighteen-year-old son came to my room on October 2 and told me that he was not going to school the next day, that he and his friends from school would go on strike too. He gave me four reasons why he would be joining me in the march: (1) No one can take away rights from women. (2) He can’t imagine the horror of bearing a child and watching it die in the next minutes. (3) He can’t imagine that someone could and would force a raped girl to bear a child. (4) (And this one was a shock even for me, because I did not think about it.) The Polish health and social system is not prepared for this. The waiting lists for the kinds of specialists a baby with severe birth defects needs can be a year long — anyone in this circumstance with money treats themselves outside the national health system. If you are not wealthy and have a struggling baby, the future is very, very grim. What my son said can sound cruel, but raising a very sick child with various birth defects is costly both in the emotional sense and the material sense. I somehow feel different because I am older and I have heard and seen more, but I understand his point of view that no women should be forced to raise a child that will suffer all its life.

A law introduced in 1993 made abortion legal in Poland only under those three exceptions I have mentioned. When the restrictions were passed, the law was billed as a compromise; anti-abortion groups with strong Catholic backing have been fighting to get rid of the limits ever since. The new “Stop Abortion” bill, which would criminalize abortion in any circumstance, was composed by the anti-abortion male activist Mariusz Dzierzawski, who says abortion-rights activists want to “kill the children.”

**MP:** I read this quote (1): “Whoever causes the death of the unborn child is punishable by imprisonment up to three years. If I have a patient with pre-eclampsia, who is 32 weeks pregnant, I will have to let her and her child die.”

**AG:** The first part of the sentence is a quote from a new law; the second could become a terrifying reality.

**MP:** How involved is the church in the Polish government?

**AG:** Poland is a Catholic country ruled by a right-wing party — PiS. People, doctors, nurses are afraid, especially in small towns. Catholic religion is everywhere: in schools, in hospitals; even our Polish president has his own chaplain.

I am a Christian, but I am not Catholic. I am against abortion on demand, but I am for a choice. I don’t understand why 460 deputies to the lower chamber of Polish parliament want to tell me what should I do with my body. Here is what they are preparing for Polish women: no abortion under any circumstances. But there is an underlayer of the new law: anyone harming a fetus will be prosecuted and punished with up to three years. One of my concerns is that some prenatal tests are pretty invasive — will doctors still do them? Or will they be afraid?

**MP:** How does Poland compare to other European Union countries in terms of women’s rights overall?

**AG:** Polish women received voting rights in 1918, and because that was such a long time ago, I have a feeling that many Polish women forgot what rights are, what feminism is. Also, during the Communist era, there was this very strange situation where women were encouraged to work but at the same time they were obliged to take care of the house. After the fall of the Berlin Wall, women gained access to Western culture, and nowadays, we still have (2). Also, a lot of small businesses are run by women, and Polish women are famous for their entrepreneurship skills.

But we still have a big gap between the city and rural area, where the most important leader is the church, and their rules are out of date and stale. I live in a big city and work on a middle-management level, which probably somehow detaches me from problems of uneducated, underpaid women.

**AG:** Before the protests, there was dancing and lots of drumming. It was a big, peaceful crowd. I felt safe, like wrapped up in a blanket. Then we walked in a crowd of 15,000 people on closed-for-traffic streets. Women, men, children, young, old, in groups, families, people with strollers, most dressed in black. The color black was a sign of mourning of Polish women’s rights. The march ended on the Main Market Square, here in Krakow — the most beautiful place on earth. All of us there shouting, “We have rights, we have choice!” We do! No one can take it away from us.

Groups in more than 50 cities in Poland created their own events. In many cities there were also marches, and in Warsaw, the capital of Poland, 25,000 people marched. If there will be a need, we will do it again, and again, and again. I want the current law respected so that doctors can’t hide behind a conscience clause. I had a female doctor who refused to prescribe an IUD for me because of her faith. Frankly I don’t care what she believes in; she is a doctor! Come on! I want easy access to birth control, the morning-after pill, and prenatal testing. I want better sex education. I want access to in vitro fertilization for all — it is currently not covered by our national health care, and so it’s only available to the wealthy. I want women who give birth to very sick children to have all of their expenses covered.

Poland is a country where the Catholic Church has such a powerful voice that even for me it is hard to imagine that there will be a pro-choice law in Poland. But I think now we have opened new doors, and women have started to speak with one voice. I strongly believe that this is not the end.