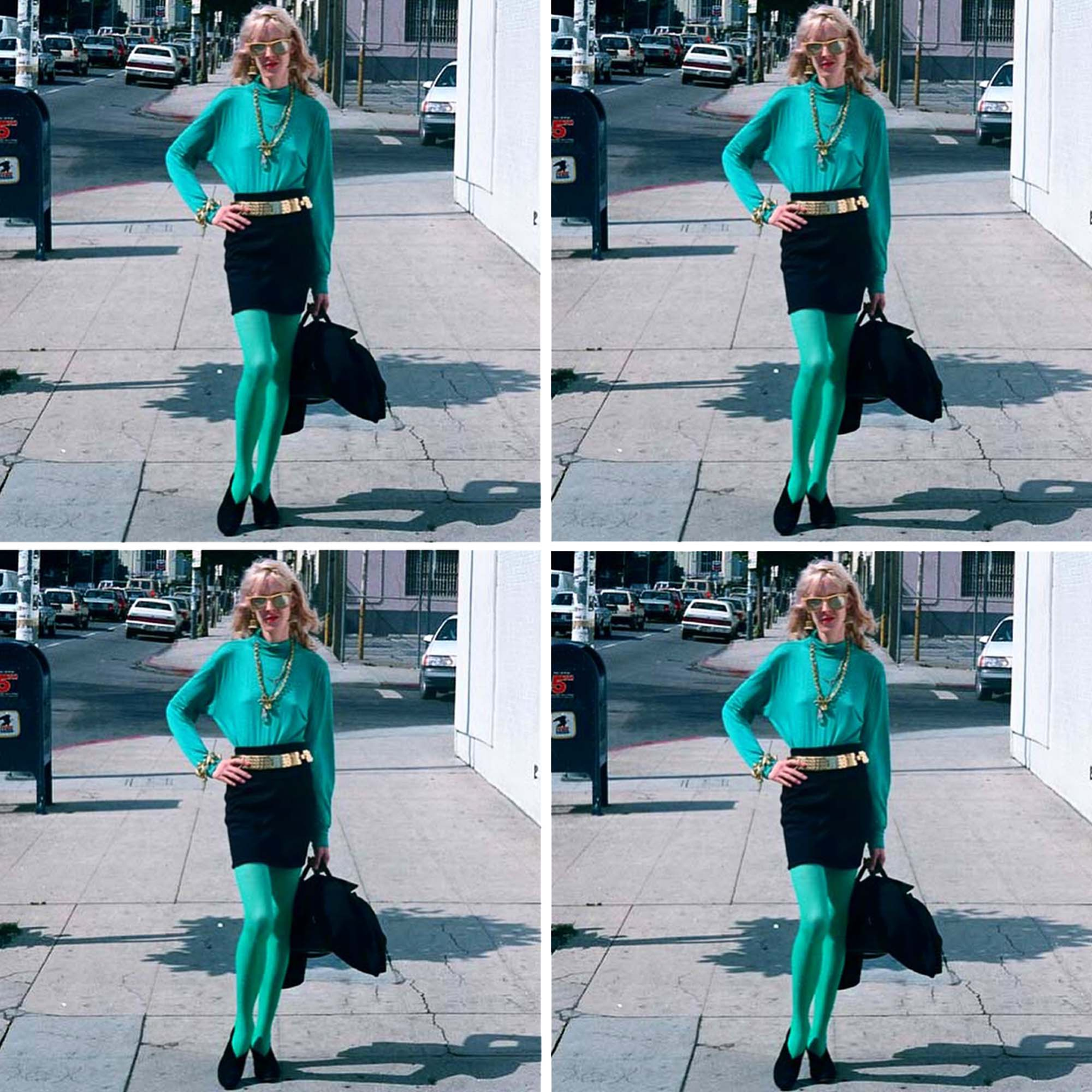 In the late 1980s, when I was a newly arrived, barely solvent resident of the East Village, I had frequent debates with myself about whether to walk up East 7th Street on my way home. If I did, I would pass by Einstein’s, a small boutique that to me was the fashion equivalent of a Viennese bakery, with sumptuous clothing and costume jewelry instead of Sacher tortes and petits fours. The jewelry was especially swoony. It was one-of-a-kind, big in size, wit, and personality: gold seraphs cavorting on a giant cuff, a pair of miniature candelabra earrings (complete with dripping wax), a black jet necklace with tentacles like an octopus.

There were no mannequins or display trays showcasing the goods inside. Instead, there were theatrical tableaux starring one or more dolls, hand-sewn and smartly attired. Some were effigies of fashion legends like Coco Chanel and model Peggy Moffitt, muse to the visionary ’60s designer Rudi Gernreich. The invented characters might as well have been famous, too, because they were certainly fascinating: the sneering, anorexic society matron; the jolly circus fat lady; the cheery sideshow pinhead; the battle-hardened, chain-smoking housemaid. The dolls weren’t about simple prettiness, yet each expressed an idea of beauty, including those that didn’t conform to conventional ideas of beauty. The windows at Einstein’s were a source of awe and delight, a free pleasure in a city where not much came cheap.

I never went into Einstein’s; I never had the nerve. A few years and a move to Seattle later, however, I met the designer of that jewelry and owner of Einstein’s, Paul Monroe. It was 1996, and I’d just gotten a haircut in a salon on a residential street. As I was leaving, I noticed a hand-painted sandwich board a few doors down that said “Que” in curling script. The sign led to a tiny boutique on the ground floor of a modernist house. There was an Anna Sui skirt in the window — and a Peggy Moffitt doll. Paul had brought a little bit of his old store’s magic to gray Seattle. He and I became friends that day, and I learned that all the dolls I had seen were the work of his late wife, Greer Lankton, and represented just one corner of the singular universe she willed into existence during her 38 years.

> I never went into Einstein’s; I never had the nerve. ​

Born in 1958 as Greg Lankton, Greer grew up in suburban Illinois. She was the youngest child of a Presbyterian minister and his wife. Fine-boned and androgynous, Greer’s earliest desire was simply to feel pretty like a girl; as a toddler, she liked to put a washcloth on her head and pretend it was long hair. Even that fairly anodyne bit of feminine self-expression was alarming in those days. By Greer’s reckoning, she was eighteen months old when she saw a psychiatrist for the first time. A few months later, lonely and longing for a friend, Greer made herself a doll out of hollyhock flowers. The link between life and art began there, when she was just two years old. Dolls were not only her primary creative medium; they were her stalwart friends, alter egos, and confidantes.

By the time she was in sixth grade, she was working with wire, stuffing, and other materials that allowed her to make more sophisticated dolls, some of them life-size. And she became her own work of art once when she started dressing in drag around age twelve. On the sly, Greer became a dedicated and expert thrift shopper, scouring the racks for pieces that spoke to her love of Golden Age Hollywood and high fashion. She was as determined and tenacious as any ’30s movie starlet, surreptitiously glamming herself up after school and riding her bike to the local Woolworths for photo-booth sessions in glorious black and white.

> By the time she was in sixth grade, she was working with wire, stuffing, and other materials that allowed her to make more sophisticated dolls, some of them life-size. ​

Meanwhile, she continued to see shrink after shrink in search of a solution to the “problem” of being both a cross-dresser _and_ gay. The pressure to be someone else was unrelenting, suffocating. From the ages of fourteen to nineteen, Greer suffered through breakdowns and stints in mental hospitals that included shock therapy. Finally, she underwent a complete sexual reassignment — hormone treatment and penile inversion surgery, a procedure that inverts the skin of the hollowed-out penis to line a newly created vagina.

Sexual-reassignment surgery was even rarer in the United States when Greer had it in 1979 than it is today. In the mid-’60s a handful of American universities had established treatment clinics to perform penile inversions, (1). Most of those clinics had closed by the early 1970s, and for years there were only a handful of private physicians who performed penile inversions in the United States.

According to her husband, Paul, Greer didn’t want the surgery but, as she later explained, she was too worn out to fight. Greer had just turned 21 (but was still covered by her father’s insurance) when she was treated at a private clinic in Ohio. Following her recovery, she moved to New York City, where she received a BFA from the Pratt Institute in Brooklyn.

Greer drew on those first two decades and her truth-is-stranger-than-fiction experiences for the work she began showing in 1981, when she was featured in the now-legendary _New York/New Wave_ group show at PS1 in Long Island, which also featured Jean-Michel Basquiat, Keith Haring, Sarah Charlesworth, Robert Mapplethorpe, and Kiki Smith, among many, many others. The pieces she contributed to that show reflected the raw wounds of childhood, leading up to what Greer always referred to as her “sex change” or “the operation.” There were hermaphrodite dolls and dolls trapped in wire cages, hunched and folded onto themselves. A series of watercolors gave a haunting account of the operation itself, from the eve of the surgery through the recovery. But the final piece of the show, a funny-looking doll named Rags, marked a beginning. She was literally made from the rags of her fellow dolls and splotched with red in a reference to Greer’s surgical dressings. With her big, floppy feet and hands, bulbous two-tiered head, and messy, red-lipsticked _O_ of a mouth, Rags was sui generis, a doll uncaged.

Greer became one of the bright stars of the ’80s East Village art scene. She collaborated with and inspired fellow artists including David Wojnarowicz, filmmaker Nick Zedd, and photographers Peter Hujar, David Armstrong, and Nan Goldin. She made art that was ahead of its time in its exploration of the body, gender, and sexuality; art that no one else could have made. She made dolls of her heroes and friends who flouted social and cultural norms; Warhol superstar Candy Darling and Divine were favorite subjects, and there were dolls of local luminaries like drag performance artist Ethyl Eichelberger and transgender supermodel Teri Toye.

> Greer became one of the bright stars of the ’80s East Village art scene.​

She and Paul became partners in life and work in 1983. They were uncannily well-matched, with creative and personal sensibilities that were of a piece: beauty resided in difference, too much was exactly right, and freak flags were made to be flown high. When they married in 1987, Greer created the bride and groom dolls for the top of the wedding cake. The dolls smile blissfully and hold hands: Greer, yellow-blonde and sexy in her mother’s wedding dress, which she had altered to be form-fitting and partially sheer; Paul, green-haired and chic in a black turtleneck, white jacket, and black vinyl pants.

For nearly a decade, Einstein’s was an ongoing platform for Greer’s art, and fashion players noticed. Barneys commissioned her to make life-size dolls of Anna Wintour and Diana Vreeland for a window display saluting _Vogue._ As AIDS began to decimate New York’s arts communities, Greer responded with anguished yet disciplined work, including masks and sculptures that evoked the ravaged bodies of people she loved.

Her own health began to decline in the 1990s, and she moved back to the Chicago area. But she continued working and achieved important recognition when she was included in the Whitney Biennial and Venice Biennale of 1995. She summed up her life in what would be her final work, a massive installation called _It’s all about ME, Not You,_ a doll-studded re-creation of her Chicago apartment. She died a few weeks after attending the show’s opening at the Mattress Factory museum in Pittsburgh, Pennsylvania. The Mattress Factory put the show on permanent display in 2009.

Finally, I was seeing all these works that I’d heard about for so many years: Princess Pamela, Aunt Ruth, Candy Darling, and Jackie O. The little wire cages with dolls trapped inside. And so much more. It left me speechless. And wishing like hell that I’d had the nerve to walk into Einstein’s back in 1988.She didn’t have an easy life, but Greer was loved: by her friends and her peers, and most of all by her husband, Paul. Since her death, Paul has worked nonstop to keep her memory alive and bring her work to the public. Those efforts took a big step forward in 2014, when he worked with the small nonprofit New York gallery Participant to mount the first posthumous retrospective of Greer’s work. For nearly twenty years, Paul has been one of my closest friends, and I wanted to be there to support him on this milestone occasion. I flew from California to New York for opening night.

_Greer’s work will be featured in the Museum of the City of New York’s upcoming_ Gay Gotham _exhibition, opening October 7, 2016. In 2017, she will be featured in a group show at the National Gallery of Art in Washington, DC. Photos of_ It’s all about ME, Not You _can be seen on the_ (2)_. Photos of Greer and her art can be seen anytime at_ (3)_._

_Meredith Osborne is a freelance writer based in San Francisco._