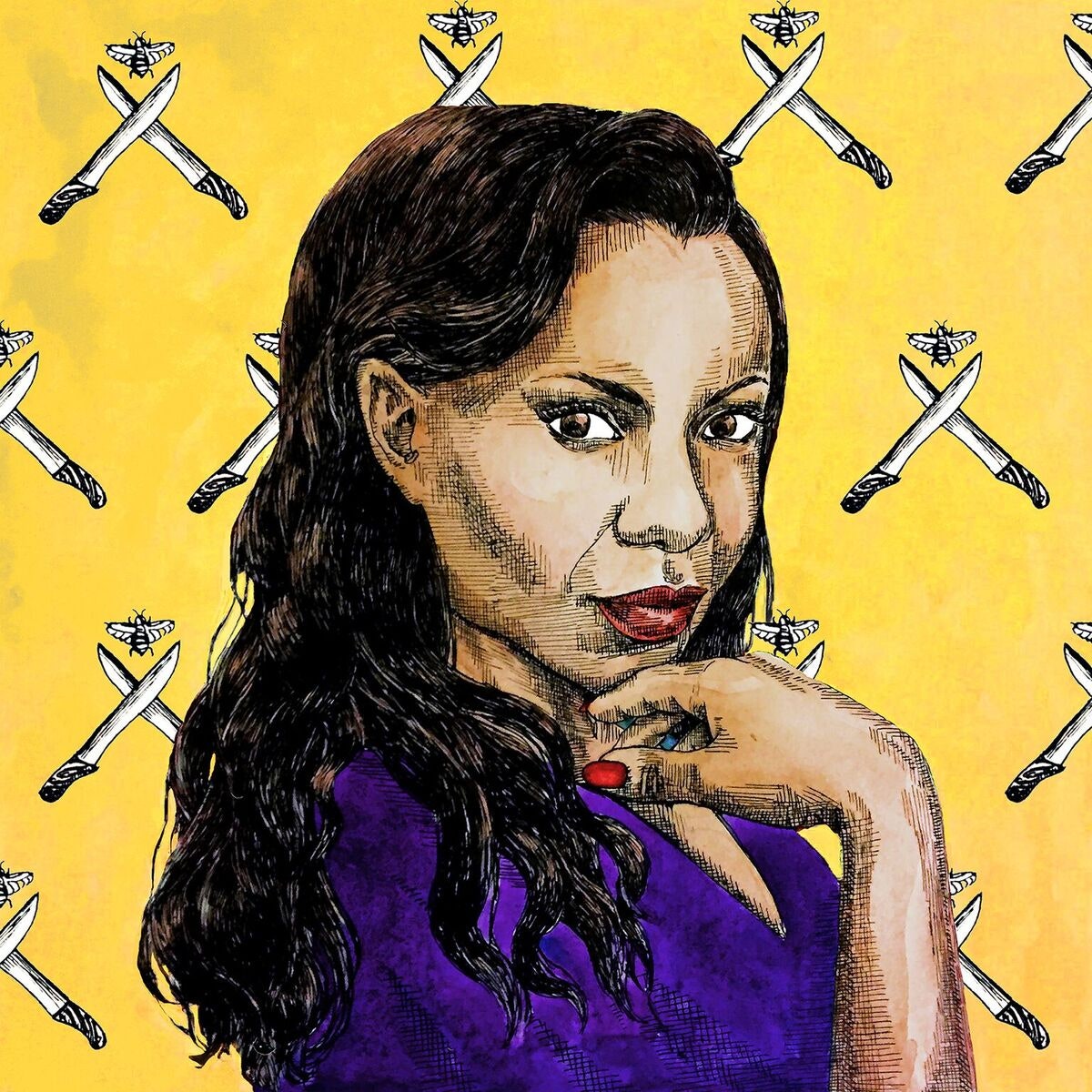 Shalita Grant got (1) earlier this year: it was, she told me in a summer interview, a play on the phrase _honey-dipped machete,_ which she heard from a baba in New Orleans. “You don’t have to fight rough, you can fight sweet,” she says he told her. “You don’t have to let the fight callous you.” For Grant, the reading made clear to her not only what her first tattoo should be but also how to understand her part in the larger fight for racial and gender equality.

“I believe in the good of people, which is why I talk about social justice so much,” she said. “It’s like a little reminder to me that in this moment, I am OK, I am fine, and I can keep fighting but not wear the battles.”

Grant’s characters’ battles are often visible onscreen, too, whether she’s playing (2), chasing down bad guys in the crime procedural _NCIS: New Orleans,_ or (3), a formerly enslaved woman in the Civil War on the PBS show _Mercy Street_.

Grant filmed the two series in quick succession (4), because the PBS show felt so important to her. “What I love about Black Lives Matter and what I thought _Mercy Street_ would be able to highlight was that, when black people are free, everyone is free,” she explained. “If the least of us can live, then we have a good society.”

Grant’s used to fighting the good fight: within three years of graduating from Juilliard’s prestigious acting program, she was playing Cassandra in _Vanya and Sonia and Masha and Spike_ on Broadway, (5) for her portrayal.

From there, she decided to try to conquer Los Angeles, but it took (4) (and a couple of other jobs) before she got another role; even her character on _NCIS: New Orleans_ had been originally slated for only a three-to-five-episode arc. This fall, though, will be her third season on the series, and while on hiatus she appeared (6) in _A Midsummer Night’s Dream_ with New York City’s Shakespeare in the Park. I spoke to her about challenging stereotypical narratives, fighting for her career, and going from Broadway to LA.

**Megan Carpentier:** What was it like to go from being a student to being a Tony-nominated actress in just a few years?

So I was like, “I’m going to LA. I quit this town. I’m going to go to another town, and I’m going to start a new fight.” And when I got out there, it was sort of like, _Tony who? Julie what? Can you do regular acting, or is it just the Broadway thing?_ I was like, _Wow, OK, this might be harder than I thought it would be._

**MC:** You’ve also talked about being told in that first period of time in LA — even though, obviously, you’re a very fit person and a relatively small person — that you were maybe a little bit too heavy.

**SG:** It’s just always like, _Ugh, really?_ But you play because you want to be in the room. Even though I understood what was being asked of me, I didn’t see myself that way, so I had a choice to make. I could either thug it out and have my moral stance, or I could find a way to do this that actually works for me. I invested in getting fit, doing things that would benefit my body in the long run.

I had in my mind what women do to get themselves , and I said, “I’m definitely not going to fucking do that to myself.” I had too much love and respect for myself. I know why I’m doing this. I know that I’m not bad. I know that I’m not the problem. It’s just a thing, so fuck it.

**SG:** I like to think of things that I can’t do and work on that. So the first thing was being able to do a pull-up: watching videos and tutorials, and then doing that shit for myself. Then when I was able to do one, I was like, _I’m amazing. I can do a pull-up._ Can I do two? Nah, son. And then I said, _Ooh, 5K. I ain’t never ran a 5K. Let me try that._ I’m going to try to find a way to do this, just like I did with my career. I didn’t book the first thing I auditioned for. I didn’t book the fourteenth thing I auditioned for. But it didn’t stop me.

**MC:** So what was that transition like when you did finally land the job on _NCIS: New Orleans_?

**SG:** When I initially got the job and I found out that I was going to be a series regular, the first thing I thought — very human — was _Oh my God. I don’t have to worry about money._ But I didn’t realize just how different a procedural is … I do come from theater, and I am always looking for ways to be human and be alive and in the moment. It is challenging to do that with a procedural.

**MC:** As you were finishing up your first season on the show, you got _Mercy Street_. You’ve talked in some other interviews about having to prepare to take a character of an enslaved woman who goes through sexual assault and tries to perform her own abortion and ends up infertile.

There was an issue with the prop for the abortion. The director wanted these huge shears that I would stick up myself. It was one of those moments where you think to yourself, _You’re young, you’re a woman. This is only your second TV series where you are one of the main actors, so be quiet._

But I stopped and said, “Hey, listen. This doesn’t make sense. If in the ’60s and ’70s women were using coat hangers, this doesn’t feel right.” His response was that he really wanted this vicious thing.

I went to the creator and said, “You had three babies, right? So you know what your cervix looks like. You know that you wouldn’t be able to get this thing through this hole without passing out. You wouldn’t ever have had an abortion.” And she was like, “Yeah.” So we changed it to something else.

It was little battles like that on set that you have to fight to make sure that the story that you’re telling is real and it’s respectful.

_Megan Carpentier is an editor at Think, a contributing editor for opinion at_ U.S. News & World Report, _and a columnist for Dame Magazine. Her work has also appeared in_ Rolling Stone, The Guardian, Esquire, The New Republic, Glamour, _and other publications._