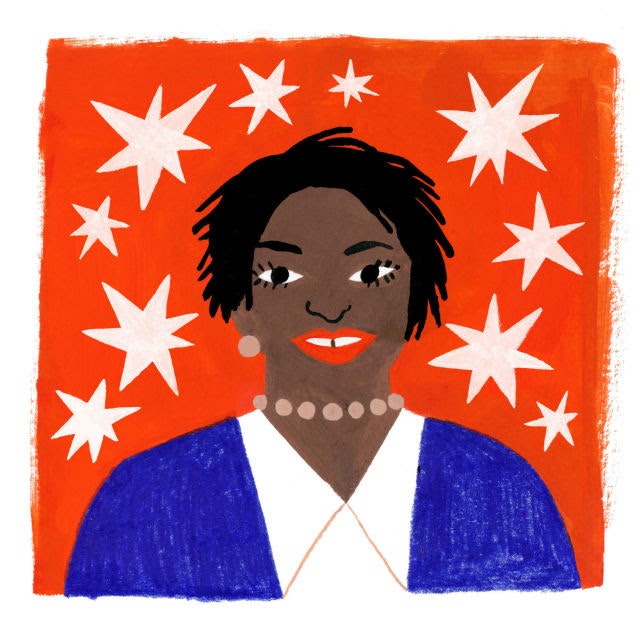 *Georgia state representative Stacey Abrams is, by all accounts, a political powerhouse poised to lead the Democratic Party into the next decade. At just 42, she’s the House minority leader (1)* *). The* New York Times *recently named her one of “* * (2)* *,” and Emily’s List honored her with the* (3) *. She also has a degree from Yale Law School, is an entrepreneur, and writes romance novels about spies, ethnobotanists, and chemical physicists on the side.*

*Resplendent in a red suit, Abrams gave a stirring speech about her passion for public service at the 2016* * (4)* *. “Growing up as the daughter of a librarian and a shipyard worker in Southern Mississippi, my family was hit time and again by the economic insecurity that is too often driven by racism, sexism, and the ills that come from being born in the wrong ZIP code,” Abrams said. “Still, every day my parents taught us, all six of their children, to celebrate through service the grace that is America.”*

*Ashley C. Ford spoke to Abrams earlier this year about her commitment to registering minority voters in Georgia with her New Georgia Project, what happened when her parents became ministers and how that inspired her commitment to public work, and all about those spies in love.*

**Ashley Ford:** I read that your parents went to school together and became ministers together. How, if at all, have religion and spirituality inspired your commitment to public service?

**Stacey Abrams:** What drove my parents was the notion that their faith required dedication to social justice. Those two pieces have always been inextricably linked for us. We converted from being Baptist to Methodist. The Bible has to be a living, breathing, and active part of who you are. That was how my parents raised us. For me, when they decided to become minsters at the age of 40, it was a natural progression from the lives they lived.

When you’re the daughter of two ministers, you’re always feeling afraid of failing the Holy Spirit. I don’t want to get called into the family business. My ministry is government. There are very few things as profound as government. Government at its most basic is people who contribute to each other. Who organize themselves to support one another. We conflate government and politics, but they’re not the same thing.

I do not claim to be a minister. Let me be very clear. But my beliefs animate me. They animate the choices I make as a legislator.

**AF:** Would you say that in general people who get involved in government work approach it from that place of the call, or at least the desire, to serve?

**SA:** It is my profound hope that is what motivates people. I would say that sometimes the act of reality is less clear. We make choices, I find sometimes, that are counter to that idea of service. There’s a selfishness that can be embedded in being in politics that I think you have to actively guard against. There is narcissism that is inherent.

**SA:** The job of a minority leader can be done in one of two ways. My approach, from the very beginning, has been to make my first priority cooperation, which seems counterintuitive when your job is to be the opposition.

In my mind, the role is not to prove the other side to be wrong or evil. There’s a core element that makes competition necessary. I don’t want to diminish that. My first priority is to find out: “How do you get the work done?” When you are in the minority, the work only gets done if the majority agrees to work with you.

Too often we mistake positions for power. It happens in politics a lot of the time. For me, it’s always making certain that I never take my position to mean that I have power. Or that I underestimate the power of other people because of the position they hold.

**AF:** You’re the first woman to lead either party for the Georgia General Assembly, and the first African American to lead in the House of Representatives. What does it feel like to be a first and then to also take the nontraditional position? I feel like so often with firsts, they try to blend in.

**SA:** I begin my approach with the recognition that as a minority, you’re always starting at a different posture. It’s just ignorance to think that you aren’t. I would love to imagine that my uniqueness pervades all and convinces people to do what I want. It’s not going to happen.

Your status is a beginning. It’s the marker. It starts the narrative. Your job, then, is to fill it out and give it contour, texture, and meaning. If you spend all of your time grounded in the identity you don’t create the story. I feel very comfortable saying that I’m the only minority leader to also be a romance novelist, and I’m definitely the only one who is a tax attorney, romance novelist, slash entrepreneur. Those are all different parts of who I am. I don’t give primacy to any of them more than the other except to know that they each tell a story about me.

Yes, I’m the first woman to have this job. What that means is when I enter a space with men who are not used to having the conversations I need them to have with me, I begin by trying to create a space for that conversation to happen. You can enter it with anger, with an assumption of discrimination, or you can enter it as an opportunity to give people a chance to be different than they are. I enter the space knowing, “You probably haven’t talked to someone with my equipment about issues like this, so let me help you out.”

I’ve started three companies with my business partner, whose name is Laura Hodgson. Laura is one of the smartest people I know. She and I met in a leadership class. We became really good friends. We rely on each other. When we became business partners, people who knew us were very confused. She’s a white woman who is a Republican, and I’m a black woman who’s a Democrat.

**AF:** To shift gears a bit, I was reading about how committed you are to increasing opportunities for political engagement for people of color. What is the biggest obstacle to getting voters of colors to the polls?

**SA:** The South is changing dramatically and quickly. It is going to be majority-minority in the next decade. Georgia will be majority-minority by 2025. The rest of the Southern states, probably another fifteen years after that. It’s going to happen. We should all be terrified of having so much of our population disenfranchised and disengaged from our politics. The decisions that we make about how we collect our money, how we spend our money, how we treat our people, and how we raise our children, those choices are political decisions. I am terrified that we will ignore this burgeoning population until it’s too late.

Intellectually, I’ve considered this in my academic work, but there’s a practical responsibility. That practical responsibility starts with “How do you cast a ballot?” You cast a ballot by being registered to vote. Thus, we’ve created the (5). We focus on people of color because they are the largest portion of the population that has the least amount of political power.

**AF:** Do you think the people in similar positions to you are being held back by the lack of diversity in politics at the state level?

**SA:** I recognize the importance of diversity, but I also recognize and have the capacity to grow and groom my team. Most of the young people who work for me had never held jobs like the New Georgia Project before. Typically, you hire people with experience. Experience is first. I took a different approach, and I thought when I hired my team, *Experience is good, passion is better.* I can teach you how to do it. I can’t teach you why. I can’t teach you to have that fire that says, “I need to serve.”

**AF:** So you’re a house minority leader slash business owner slash tax attorney slash voter advocate. How and where did you find the energy to write eight novels?

**SA:** I am privileged to have a range of interests and to have skills. The first novel I wrote was actually going to be a spy novel. I found out publishers didn’t think that men would agree to buy spy novels about women, so I made my spies fall in love. I still killed the same number of people. My first heroine was a chemical physicist. I have another one who’s an ethnobotanist. I have another one who’s just a drifter. I get to explore these worlds, and I find that energizing.

**SA:** My goal is to turn Georgia blue. I believe that we can turn out voters that no one has talked to in decades and who don’t expect to be involved in politics.

*Ashley C. Ford is a writer and editor for herself, and a development executive for Matter Studios.*