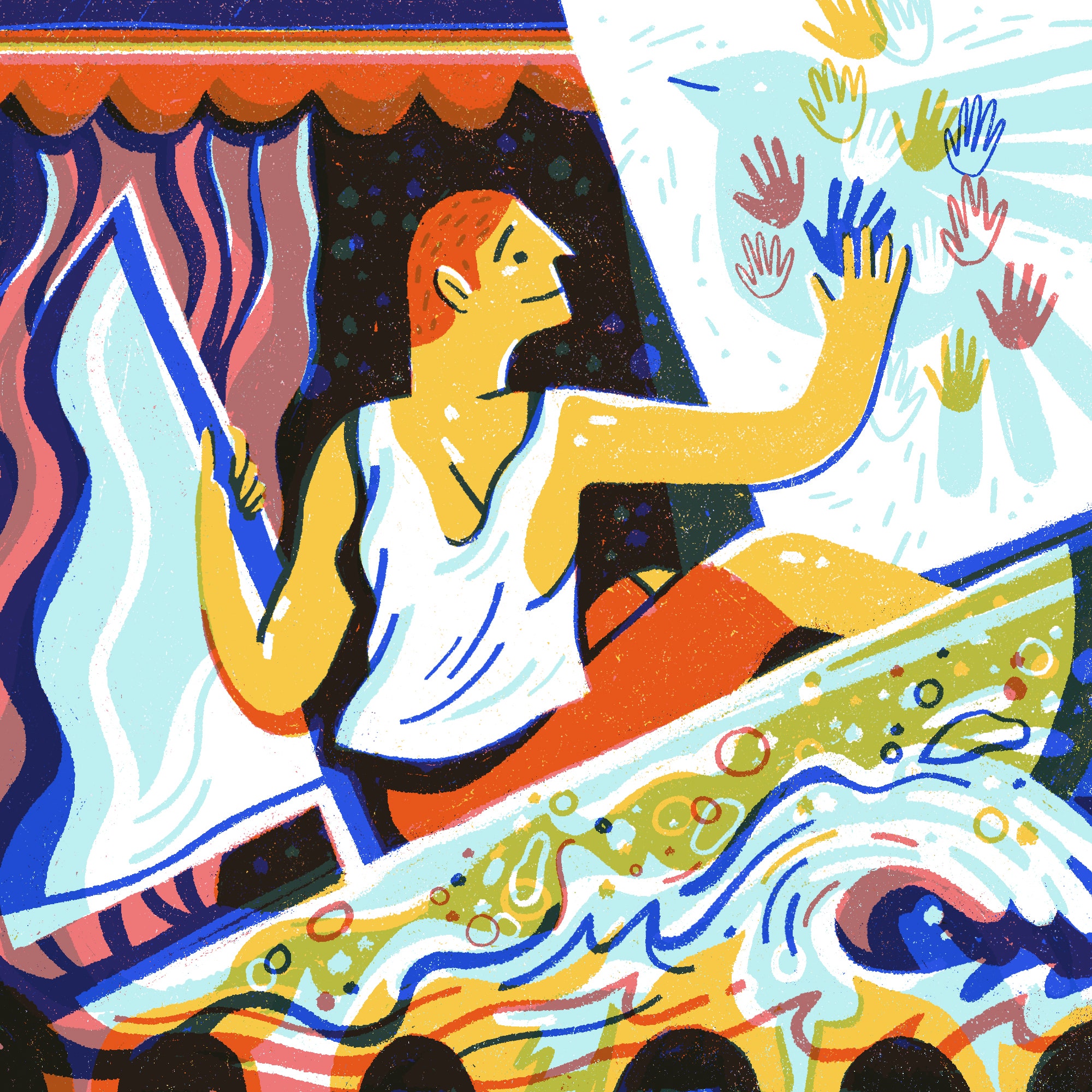 In October 2015, I was performing the part of Golde in *Fiddler on the Roof* on Broadway just as the Syrian-refugee crisis hit its American-media peak. For those of you who don’t know, *Fiddler on the Roof* is, at its core, about refugees: It’s the story of a Jewish man and his five daughters in 1905 Russia who are about to be thrown out of their village by the Tsar’s edict because of their religion. I felt the resonance of the story we were performing as I looked at the haunting images of dead children and desperate families fleeing their homes. I gave myself the task of putting on a weekly bake sale backstage to raise money. By the end of my year in *Fiddler*, we’d collected about $30,000.

I didn’t want to cluelessly give that money to organizations that weren’t assisting refugees directly. I found an article called (1) This inspired piece made me want to get involved on a more intimate level. It described civilians who responded to the crisis with a variety of backgrounds not immediately associated with aid work. I was also struck by a story about (2) that toured nearly every country in the world and performed at five refugee camps. By the time I had finished playing Golde, I decided to try to mount a production of a classic play at a refugee camp.

The idea that people in difficult circumstances might benefit from performing is not an original notion. A cousin who survived the Holocaust recalled a production he did of *The Gold Diggers* while awaiting entry to Israel at a displaced-persons camp in Munich. I shared the seeds of my project with an actor friend who is also a brilliant activist. He connected me with (3), and that’s when I started to plan.

I AM YOU is an NGO working to make the lives of displaced people at Syrian-refugee camps better through education. My very first professional job in the theater was with the company Theatre for a New Audience, doing Shakespeare workshops and abridged productions for New York City schoolkids and their teachers. I pitched the basic idea of performing at a camp to Katina Saoulli, executive director of I AM YOU, and we were on our way … to Greece. Katina loved the idea but said it could not happen unless we took a good look at the conditions in Ritsona, a refugee camp near Athens, first.

Shakespeare is tough. Even the most erudite actors can have a hard time deciphering the meaning of every line. That said, the stories he told were beyond. Take, for example, *The Tempest*: There’s a beloved guy who happens to rank quite high in the government. He spoke out against corruption and was thrown into the sea with his three-year-old daughter to die in a “rotten carcass of a butt .” Instead, he landed on an island and remained there for twelve years, tamed the wilds of this island with a bit of magic and a lot of compassion, and finally found redemption in the form of family.

We told this story to some boys at the Ritsona camp when we were there in December. Hamza, one of the boys, had offered to translate from English to Arabic. He’d come to Ritsona two years earlier. His father, a blacklisted scholar of some note, had fled to Germany. Hamza and his brother Mustafa waited for reunification with their dad. They wrote passionate articles to the world on their arrival and read to us from their journal:

“We are people. Not animals. How can you let us live in the woods … exposed to animals? If you understand what being humane is, being human is … a border should be opened. I challenge the president of any country to stay in a tent for a night if they can. I thank everyone who comes to help us and respects humanity.”

We continued our halting attempts to tell Shakespeare’s tale, written in 1610 and translated into Arabic much later. The boys sitting next to me were nearly sixteen. Hamza remained optimistic that he’d be reunited with his father in Germany so he could resume his studies after years without school. Another boy, Ibrahim, told me he wanted to be a pediatrician. When the retelling finally came to an end, Ibrahim stared ahead and said, “That’s the most beautiful story I’ve ever heard.”

You can tell the need for art, for beauty, is central to all communities, no matter how makeshift, just by looking around the camp: any space that might welcome a drawing has been covered in many. The crumbling walls are now all painted with messages of possibility: “Why not Hope??” is written above the images of a home, a heart, a flower, and a butterfly. Every structure not covered in tarps and towels for insulation is painted in vibrant colors and moving slogans. “We have the right to human rights” sits above an enormous blue dove and sets the tone.

When we go back to Ritsona this summer to put on *The Tempest*, we’ll return with a team of twelve. Four of the actors in our corps speak Arabic. One of them, a Syrian named Adham Murched, trained at the National Theatre School and just recently came to the United States. He had quite a career before the war and will be known to many of the residents from his TV work.

This is my first venture into drama as therapy, drama as healing, but the theater community is small, and finding our team was surprisingly easy — within a week of reaching out to a few performers of Middle Eastern descent, we were cast. The mask master, clown, choreographer, and composer are all magnetic artists whom I’ve worked with or swooned over, and they’ve all collaborated with nonprofessional performers under less-than-ideal circumstances. Our monthlong stay will draw all residents into the production. We will engage men, women, and kids as actors, designers, musicians, tailors, and technicians. Art, music, and dance will frame our production. The performance will be a melding of two sensibilities, but the heart of the production will be theirs.

There is a small, white IsoBox you first see as you enter the children’s safe space. It could be a home, or a playroom for dozens. A young man, Malek, wrote on it in Arabic and English: “The world is too big, bigger than the size of your sorrows, you can overcome your problems. Just close the doors that are bothering you, and open new doors, and start a new life, and make sure that no one will hinder the way of your dreams.”

I don’t know what magic we will perform or what dreams will be born. But think back to those days in high school when doing a play meant you got to be someone else. You got to make a crappy auditorium look like a palace or a bordello or a desert island in the middle of a storm. And despite your adolescent malaise, a sense of community set in, and suddenly you were special. I do believe that just the task of putting on this play will arouse those feelings we all had when even for a moment, we felt unique, and the words we spoke onstage seemed like the “most beautiful story I’ve ever heard.”

*Jessica Hecht, founder of the (4), is an actress and teacher in New York. Donate to the organization’s Kickstarter campaign (5).*