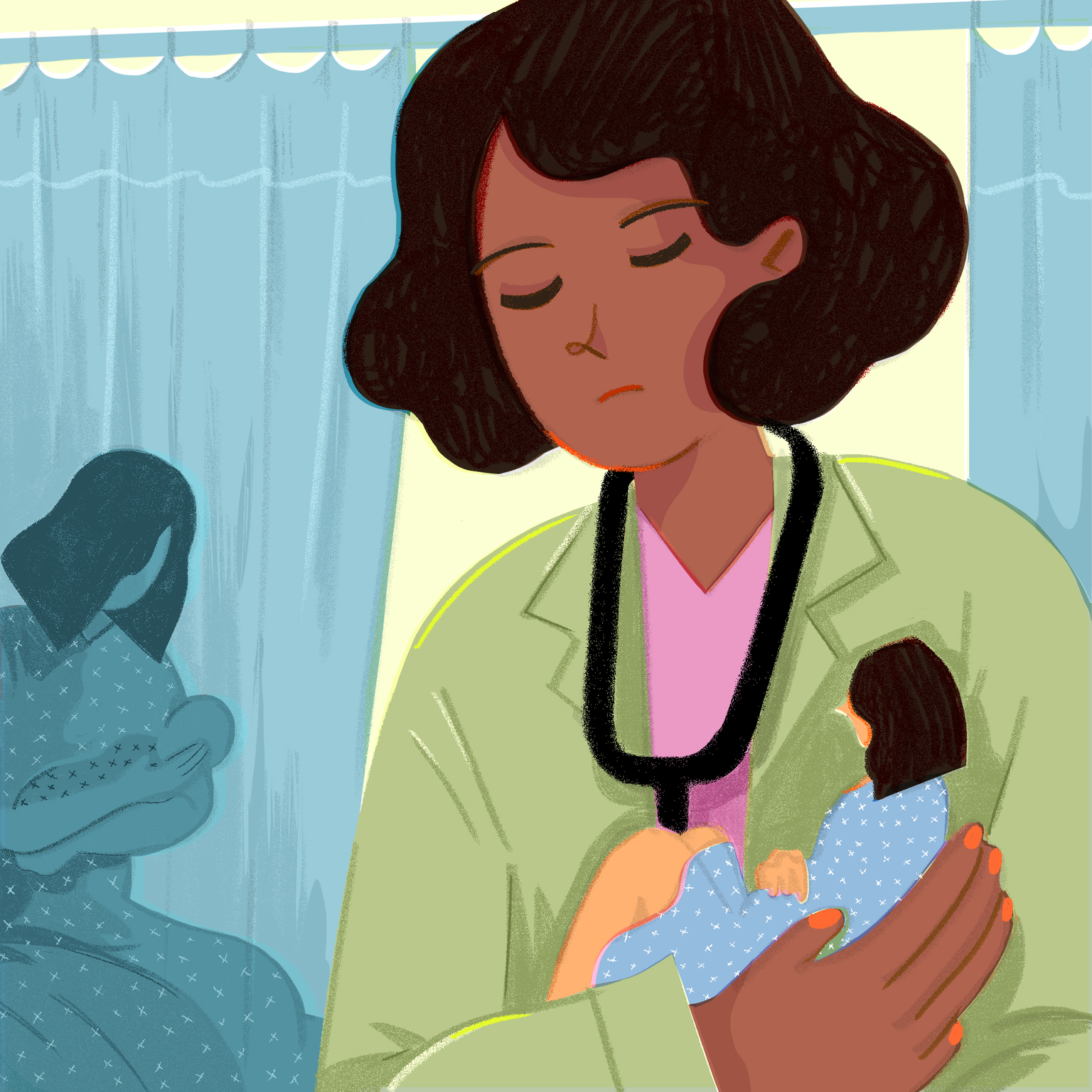 Abortion is one of our country’s most polarizing issues. According to (2), 50 percent of Americans identify as pro-choice, while 44 percent consider themselves pro-life — and this split has been consistent for the past two decades. But for most Americans, abortion isn’t as straightforward as those labels purport to be.

When you ask people to consider specific cases, a different picture emerges. (3) of 1,000 American adults found 83 percent of respondents agreed that abortion should be legal when a woman’s life is endangered, 82 percent supported legal abortion when a woman’s physical health is at risk, 75 percent supported legal abortion in cases of rape or incest, and 50 percent in cases where the fetus’s health is impaired. These results suggest a lot of Americans feel uncomfortable with abortion but don’t want to see it outlawed.

The anonymous abortion provider I spoke to in early September didn’t start out uncertain. She was raised in a pro-life household, and her mother told her that abortion was “killing a baby.” She was part of pro-life clubs and trained to persuade women not to get abortions. She was afraid to even _say_ the word “abortion.” But now, she’s an OB-GYN in the Midwest and a fellow with Physicians for Reproductive Health, and she provides abortions regularly.

We spent an hour on the phone chatting about her journey to pro-choicedom and providing abortions, what the pro-life movement gets wrong, and how motherhood changed the way she thinks about her work. We spoke anonymously to protect her safety and prevent protesters from showing up at her home.

**Alex Ronan​:** When did you first learn about abortion?

**Abortion Provider​:** I was probably eleven or so, and I must have heard the word “abortion” at school. That night I was on a walk with my mom, and I asked her what abortion was. She said that abortion was killing a baby that you didn’t want, and did I think that killing babies was right? I said, “No.” She said, “Then you’re pro-life like me.” That was my introduction to the topic.

**AR:** When did you begin to rethink abortion?

**AP:** In college. When I thought about the issue as a younger teenager, I was very self-focused. I imagined how difficult it would be to be pregnant, that it would be a big sacrifice, and that it might be fun to have a baby, which are very common things for teenagers to think. In college I started to meet women who were not pro-life and heard them talk about the variety of different reasons that women may choose abortion. I had never really thought of that before. I always thought about it in terms of, _Well, if I can do it, then everyone else could do it. I don’t see what the problem is._

**AR:** So in college were you flying under the radar as indecisive?

**AP:** No, I was in the pro-life club! The pro-life club at my college didn’t protest at clinics. Instead we focused on how to counsel a woman who was thinking about abortion to change her mind. But then my friend got pregnant. It didn’t feel right to try and convince her to change her mind. Plus, I was more concerned with her well-being and whether or not she was safe, and that whole preparation I’d learned just went out of my mind. I actually ended up offering to take her to the clinic myself, which is very anti-pro-life of me.

**AR:** What happened after that turning point?

**AP:** I started reading up on abortion more. I looked at the pro-choice billboards, very secretly, and better educated myself.

**AR:** What surprised you most as you began to study?

**AP:** The safety statistics were really shocking. I can’t remember the specifics that I looked up at the time, but we know that abortion, especially in the first trimester, is safer than getting a shot of penicillin. It’s super, super safe, and it’s certainly much safer than carrying a pregnancy to term. I also had no clue how common abortion is.

And then I was really surprised when I realized that 60 percent of women in the United States who have abortions already have children. The pro-life line is often that women seeking abortions are naïve about what a joy a child is to have in your life. When you start to think about abortion in terms of women who already have children, who are deciding that they need to take care of their families and they can’t have more, it really changes the discourse. Then when you pile in the danger of pregnancy, it’s really hard to argue with that. You’re talking about women who not only want to take care of their kids, but they want to come home to their kids at the end of the day. All of a sudden I was thinking, _Well, gosh. We need to have safer abortion clinics._

**AR:** Where were you on the pro-choice/pro-life binary when you went to med school?

**AP:** By the time I got to medical school, I was really confused, and I realized that if a woman asked me again about abortion, that I certainly wouldn’t try to dissuade her, and that I would want to actually help her get the safest care that she could. That’s when I actually started thinking about becoming an abortion provider.

In my first year of medical school I went to my first pro-choice meeting. I walked in sort of cringing, because I thought I was going to be struck down by God. I sat very quietly, and it happened to be a meeting where they were doing this thing called a value clarification. They had us go through this paper with the reasons why different women choose abortion and mark down the ones we felt conflicted about.

I realized that I would probably help all of the women on the list, and then the leader of the group, not realizing how conflicted I was, said, “Oh, well it looks like you’re considering becoming an abortion provider. Why don’t you do this externship and work during the summer at this abortion clinic?” I knew it would be a great opportunity, but I was also terrified.

**AR:** It’s a pretty bold move for someone who’s so uncertain about abortion to work in a clinic. What was that like?

**AR:** When we were emailing, you mentioned how you had this fear that your own pregnancy might change how you felt about the work that you do. I think it’s really brave to acknowledge that fear and I wanted to know what that was like for you.

**AP:** When my baby was born, he was so small. I know this sounds weird, but I remember looking at his feet and thinking how tiny they were. Especially in cases of fetal anomaly, one of the things I offer patients is footprints after the abortion. I’ve always taken a lot of pride in getting really good footprints because of how important it is for my patients. When I was in those first couple of postpartum months, I felt like the clinical distance that I had from my patients had gone away. Doing the footprints especially was really difficult for me at the time, just because I would just become overwhelmed with emotion.

**AP:** Good! I was concerned that having a baby of my own would make the procedure distasteful for me. But, in a lot of ways, having a baby really just connected me to my patients more intensely. It supercharged all my previous feelings instead of changing them.

**AR:** What have your conversations with your mom been like? Are you able to talk to her about your work? Is she supportive?

**AP:** I’m not very good at keeping secrets. So when I was working at the abortion clinic in med school, I told her. She was _very_ quiet. The next night, we talked about it again. She told me that her friend in high school had had an abortion, and that she stayed with her the night after her abortion. Her friend bled very heavily and didn’t want to call an ambulance. My mom remembers how the whole bed was covered in blood and she thought that her friend was going to die. Her friend ended up being OK, but she remembers that experience, and she respects the fact that I’m making it safe for women to have that procedure.

Hearing that was a total shock for me, because it was a total reversal of everything that she had taught me before. I was like, “What the heck, Mom?” She told me that she taught us to be pro-life because she didn’t want us to go to hell. She had kind of changed her own mind, but she didn’t want to teach us the wrong thing. She’s actually very supportive of my work now.