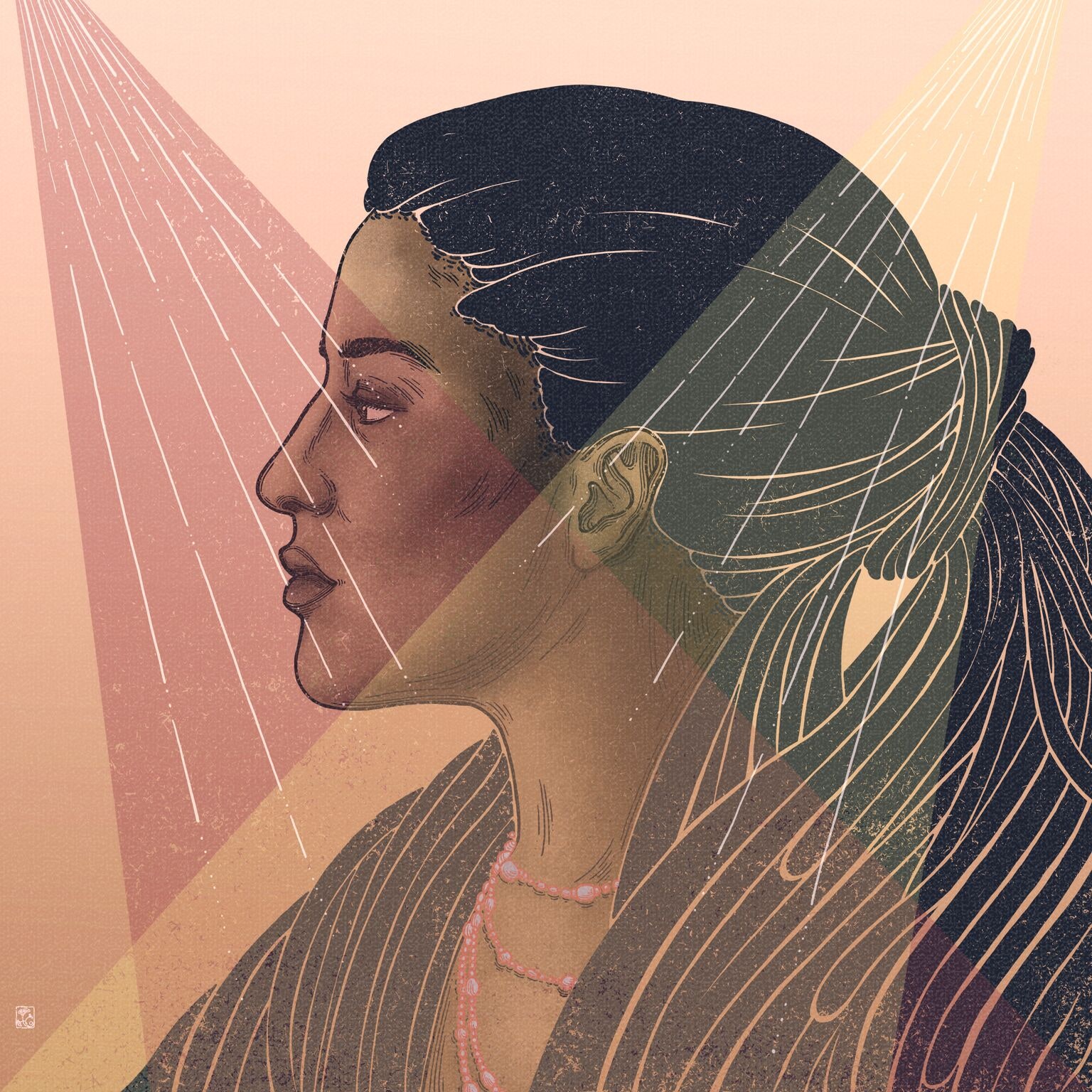 Lynn Nottage is one of our most acclaimed playwrights: she earned a Pulitzer Prize for _Ruined_, about women caught in the crossfire of civil war in the Democratic Republic of the Congo; she received a Guggenheim Fellowship for Creative Arts; and, in 2007, she was named a MacArthur “genius grant” fellow.

She’s also an activist who has a long history of protesting and, as she describes it, “walking in circles and chanting in the cold.” She once worked for Amnesty International, and she participated in Occupy Wall Street, as well as countless rallies that began when she was still a child, marching with her feminist mother.

Now a Nottage play is being produced on Broadway for the first time. _Sweat,_ which was commissioned for the Oregon Shakespeare Festival’s “American Revolution” program — focusing on new plays inspired by moments of change in our history — tells a story that’s becoming all too familiar: the halcyon days of solid careers in factories and manufacturing are long gone, and the communities whose survival depends on these jobs have to change.

Nottage was moved to research and write the play based on a 2011 _New York Times_ article headlined ” (2),” in which Reading was named the most impoverished city in America. We spoke on the phone before _Sweat_’s opening night.

**Leigh Flayton:** Have you always been an activist?

**Lynn Nottage:** My mother was a feminist and a civil-rights activist going way, way back. I think the first marches that I participated in were probably when I was five or six years old: Equal Rights Amendment, fair housing, and Black Power marches.

I remember early on, the Rolling Stones had released an album (_Some Girls_) in which one of the songs spoke about African American women in a very denigrating way. My mother was outraged and she organized a protest. I’m sort of at the tail end of that generation, so I came of age in the wake of women who had really done a lot of good work to push us forward. It’s just very much part of my DNA as a writer and as an artist, this pull to social activism.

**LF:** There was some criticism of the Women’s March and the Day Without a Woman strike that they were for women of privilege. What do you make of that criticism?

**LN:** One of the phrases that I use is “to stay in the complexity.” I think that some of the criticism is that women of color in particular have been struggling and don’t feel that some white women of privilege have always been our allies in the struggle. But to demand that we be allies when there are larger struggles … I think there is that tension that exists but, that said, I do think it’s important for all of us to participate in things like the Women’s March, because there is strength in unity. And one of the reasons that I is that I didn’t see that there was a march about white women or black women — I saw it was a march about women, and about ensuring that our voices continue to be heard, particularly in the midst of an administration that really feels resistant to include a multitude of women.

> I think that now we understand that there is a real urge and necessity
> for us to keep the fight alive.

**LF** : One of the only pleasant thoughts I had on November 9 was that art and activism were going to go into full swing.

**LN** : Well, we’ve got no choice, do we? It’s the moment when we really have to begin to shout a lot louder than we have in the past. I think that — you talk about privilege — and I thought one of the privileges we had during the Obama years was to invest in our optimism. And to feel like things were moving forward and, for the first time, to be able to sit back a tiny bit. But I think that now we understand that there is a real urge and necessity for us to keep the fight alive. ‘Cause a lot of the things that we are struggling for, we might in the next two or three years see them disappear.

**LF:** You told _Interview_ magazine your motto while writing _Sweat_ was a spin on Walt Whitman’s “Be curious, not judgmental”: “Replace judgment with curiosity.” While spending time in Reading, Pennsylvania, to research the play, you sat down with white supremacists. What were those conversations like?

**LN:** I sat down with one man, who we actually interviewed, who had white-power tattoos. So I wouldn’t say it was plural. But replacing judgment with curiosity, it’s because I think that we all, when we’re sitting down across from someone who is different, we bring a certain set of assumptions, and I didn’t want those assumptions to prevent me from really listening to the stories that people were telling me.

In the play, this African American man who’s been locked out of his factory for 93 weeks, standing in a line with a white man who is saying, “I’m not working because of you.” And he said, “Guess what? We’re all standing in the same line. We’re all in a similar predicament.” Really easy to pass blame.

**LF:** For decades, America has been going through what you call a “De-industrial Revolution.” You can’t count on a career in Michigan or West Virginia, yet we keep allowing the scenario you portray in _Sweat_ to continue — the closing or moving of factories and the subsequent, often brutal, dismissal of workers. How do we keep allowing this to happen?

**LN** : I don’t have an answer to that. It feels incredibly inhumane to me, because we’re continuing to push out and marginalize workers without coming up with real alternatives. And I think that, in part, some of it’s corporate greed. The one percent sees opportunity, and rather than thinking of the long plan, they’re thinking in short terms and immediate gratification.

But I don’t think it’s just corporations. I think it’s all of us. We spend so much time online, and we have all those ads that flash up and show us the biggest couches and beautiful shoes, and we don’t really think of the real cost — the human cost — of obtaining those things. And we’ve not really recognized the toll that it’s taking on our workforce.

**LF:** In the play, a black character gets ahead as the situation goes south, and she says she feels like a target. You’ve compared this scenario to Obama’s election on the heels of the financial disaster, and the first black mayor of Reading getting elected as it became the most impoverished city in the country. The same could be said for women set up to fail, like Marissa Mayer at Yahoo, whose male successor, (1).

**LN:** Oh, God. When I was temping years ago, I had these incredible computer skills that wouldn’t be that impressive now, but it was incredibly impressive back then. And I was able to go into the computer, and what I found was that the female executives were making exactly half of what their male coworkers were. I sent it to the female executives, and the next day I got a call from HR, a woman who was my friend giving me a heads-up, saying, “Do not bother coming in because they’re going to make a big example of you.”

**LN:** I was perfectly happy; it totally felt worth it. But it was shocking, because I was just a secretary. I was typing up letters. But I saw how hard people worked, and the women were putting in equal time, equal energy, and in some cases more. It actually hurt my feelings.

**LF:** In December, you spoke to the _New York Times_ about your impending Broadway debut, saying you were feeling “unbridled excitement and trepidation, all the bevy of emotions that come with something so big that has always been just out of reach.” Now that opening night is days away, how are you holding up?

**LN:** It’s like the best of times, it’s the worst of times. Just as I was beginning tech, my father got very ill. He lives with us and he’s hospicing at home. So it’s this incredible moment in which I want to surrender myself completely, and I found that I am divided between family demands and the demands of putting up a show.

**LN** : Yes, it does! This is a challenge. I was just thinking there are all these obstacles that keep being thrown in my path that are preventing me from the pure enjoyment of this moment.