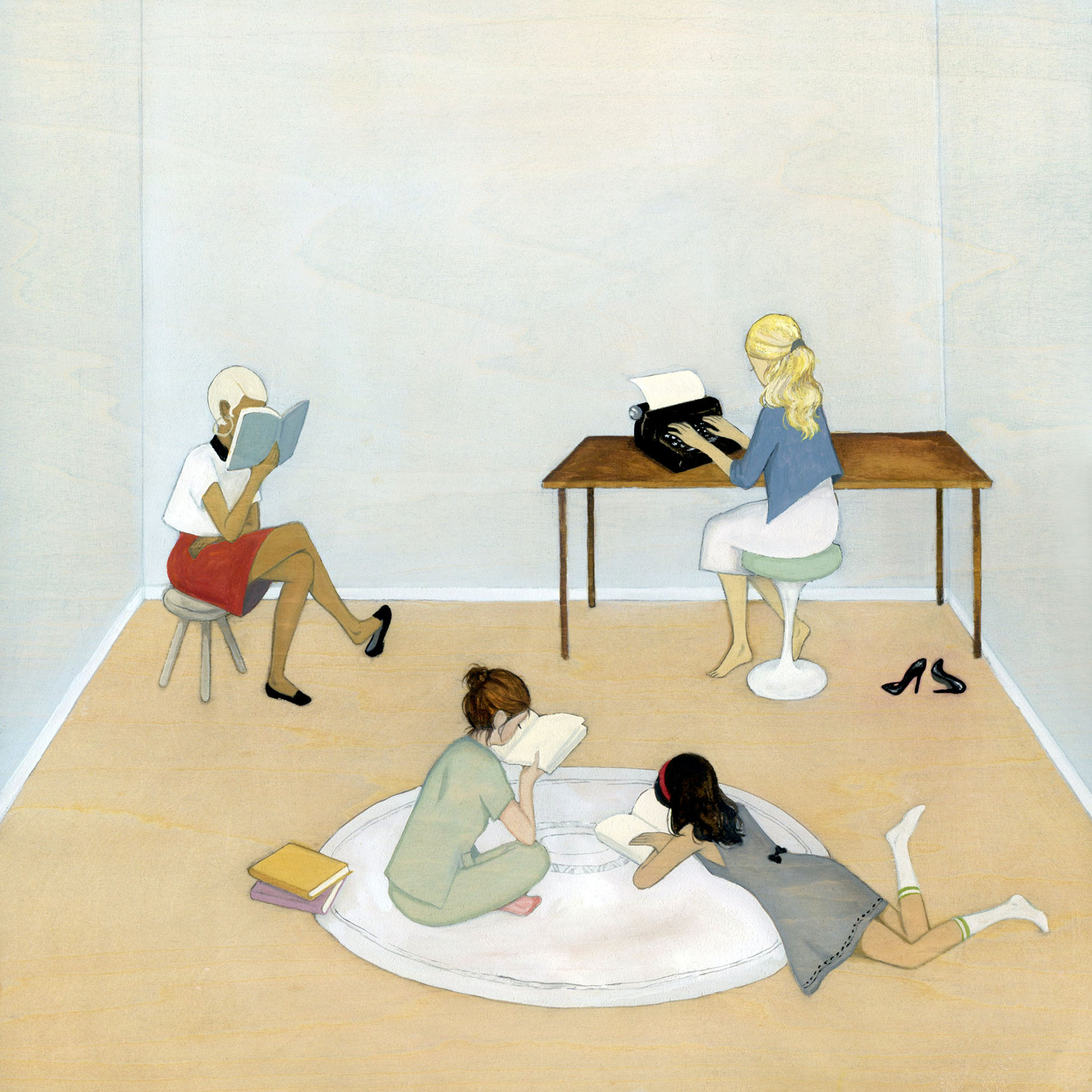 “You’re my ATM PIN code!” blurts out one fan as she reaches the head of the line where Emily Giffin is signing copies of her latest novel, (7).

We are in the Nashville boutique Draper James at a meet and greet that’s a part of the successful “Girls’ Night Out” series Random House has launched to introduce (primarily, if not mandatorily) female readers to popular writers while simultaneously providing a chance for socializing and, depending on the venue, perhaps some shopping or a manicure. In the past few weeks, between more traditional readings and signings, Emily Giffin has attended a two-day Girls’ Getaway Weekend in Charleston complete with Red Door spa events. Tonight’s girls’ night is sold out.

The shop is a riot of color: buttercup-yellow florals, rampant blue gingham. There are coordinating dog leashes, magnolia-filled glass paperweights, monogrammed luggage tags, floral-print iPhone cases, and orange-blossom-scented candles that waft their perfume through the white-painted room. There are julep cups. To a materialistic alien, it might be described as an uber-girly Madewell, or else a hyper-southern Anthropologie. “Cute” would not be construed as an insult; “bless your heart” most certainly would.

> The shop is a riot of color: buttercup-yellow florals, rampant blue gingham.

Draper James is filled with excited women long before Giffin is scheduled to appear. They sip prosecco and sweet tea and munch on miniature cupcakes from Sprinkles, a sponsor of Giffin’s tour. For the price of admission, each guest has been given a copy of _First Comes Love_ and a coupon for use at the store.

The ladies in attendance are uniformly well-turned-out, most clad in pretty summer dresses and with the sort of well-groomed hair and makeup that seems nothing short of miraculous in the muggy July heat. (A young woman who rushes in late, in scrubs, is an endearing exception.) While the crowd skews mid-twenties, there are several multigenerational groups who have made the trip to meet Giffin together; one such pair has traveled from Pennsylvania. “I got her into (8)_,_ ” explains the daughter, Lisa. “Now we read them all together.” Another, Anna, has driven from Kentucky. The event ticket “was a birthday present from my husband,” she says. “Although I hinted pretty hard.”

_First Comes Love_ is Giffin’s ninth novel. After several years billing hours at a New York law firm, she moved to London to take a crack at novel-writing, and the rest, as they say, is chick-lit history. On the subject of that term, incidentally, the 44-year-old Giffin is pragmatic: “I don’t care if they call it that,” she says. “I just don’t like it when the term is used dismissively.”

When asked which of Giffin’s books is her favorite, each reader has strong opinions, and many titles come up repeatedly. ” (1)_,_ ” definitely, says a woman named Rebecca. ” (2)_,_ ” adds her companion. _Something Borrowed,_ the debut, is still beloved. “I remember when I first read it,” says Elizabeth, from Virginia, “first I thought it wasn’t really the kind of book I would like. I thought it was too much of a beach read. But then I called up my friend, and I said, ‘You are not going to believe this. I’m reading a book and _I am rooting for the other woman_.’ And you do _not_ root for the other woman.” (Her friend shakes her head vehemently.) “And I thought, _If she can make me do that, I’m impressed._”

> When asked which of Giffin’s books is her favorite, each reader has strong opinions, and many titles come up repeatedly.

_Something Borrowed_ is the story of a young lawyer who falls into a conflicted affair with her glamorous best friend’s fiancé. “I thought, _What if you could flip that formula and make that character sympathetic?_” says Giffin. “That would be interesting.” The book’s success — and that of its 2010 film adaptation — encouraged her to pursue other inversions of the traditional relationship themes. _Baby-Proof_ explores the turmoil of a woman who doesn’t want to be a mother. (3) takes on a protagonist’s emotional infidelity. (4) involves the complexities of adoption. In many of these cases, Giffin works in subtle portraits of class tensions and social milieus. And while details of the novels may mirror those of her own life — unhappy legal careers, an ambivalent move to Atlanta — the author is adamant that no character is autobiographical. (She does concede that the two sisters who make up the dueling narrators in _First Comes Love_ contain elements of her and her own sister.)

In person, Giffin is warm, attentive, and elegant in an old-school, effortful way that evokes the heyday of back-cover portraits. She is traveling, for this leg of the tour, with her daughter, Harriet, a self-possessed sprite of a girl who clearly has the touring thing down pat. (Giffin’s two sons and husband are back in Georgia.) Giffin radiates efficiency and competence — she describes herself as type A — but never impatience. Despite being exactly the way you might imagine (or because of that) she is extremely easy to talk to. We establish that we are both married to bald men. I quickly find myself telling her about a past relationship trauma while she listens attentively. I can’t help thinking smugly that the gray-area nature of the story would make for an excellent novel — which, of course, is how her books make you feel about regular situations. We’re not used to seeing them glamorized. “I don’t judge,” she says. And then amends it. “What I do judge is not mistakes, but patterns of self-destructive behavior.”

Giffin describes her life as a bifurcated mix of intensely private — the need to buckle down to produce books on a regular basis — and completely professionally social: the high-intensity schedule of appearances, media, readings, and showmanship that comes with the best-selling-author territory. “For these weeks, I’m in it,” she says. “And I really enjoy meeting , so much.” She says she feels strongly about putting on her glamorous face too. “Even when a makeup artist in a certain town has maybe … gone a little heavy on the eyelashes,” she says wryly. “I do want to show I’ve made the effort too.”

“I like to push them,” she says of her readers. “I think they’re up to the challenge. I know they are.” It’s often the older readers who are more forgiving about the characters’ choices, or mistakes. (5)_,_ in which a story is told from the perspective of both a wife and the woman with whom her husband is having an affair. “I’d meet with library groups, and while a lot of the young women couldn’t feel any sympathy for the husband, older women could say, ‘People change, things happen, marriages evolve.'” She admits her own perspectives on the characters can change too. “I started out in the corner of Tessa, the wife,” she says. “But by the end, I think Valerie’s the one I’d be friends with in real life. I didn’t like Tessa’s friends.” Her personal favorite, however, is _Baby Proof_’_s_ editor heroine, Claudia, who “just seems like a really good person.”

> “I like to push them,” she says of her readers. “I think they’re up to the challenge. I know they are.”

The most controversial of Giffin’s novels is definitely 2014’s (6)_,_ in which a young woman becomes romantically involved with her best friend’s widowed father. “A lot of people did not like that _at all,_” says Giffin. “It was just too much for some readers. I heard it described as ‘incestuous’ — which, come on, it just isn’t. But maybe there are things I could have done differently … maybe I could have had them meet later in life, not have him know her as a child. When readers can’t follow me there, I think of it as my failure, not theirs.”

She is equally philosophical about the inevitable online trolls; Giffin has a robust and predictably businesslike social-media presence, and that means — well, we all know what that means. “Here’s the thing,” she says. “I’m _nice._ I’m a really nice person. So if I’m angry, you’ve pushed me _really_ far. It’s really just not that hard to be kind in this world.”

Giffin’s novels have a gloss of comforting beach reads, from their pastel covers to their deceptively sugary titles, but almost invariably resist neat endings. Couples end up in counseling, or divorced. Friendships are irreparably changed, or ended. Exes are not presented as villains, but as complex and worthy of love. “One thing I like about _First Comes Love,_” says Giffin, “is it’s not even a love story. It’s a relationship story, of course, but that’s very different.”

> Giffin’s novels have a gloss of comforting beach reads, from their pastel covers to their deceptively sugary titles, but almost invariably resist neat endings

Giffin’s stories often take place in the milieus where she has lived and worked: the upper echelons of Manhattan and Atlanta. Snobs and bigots are routinely denounced, and the novels often feature gay characters or people of color, but their roles are generally peripheral. While a character considers an abortion — and the narrative does not judge the choice — she changes her mind at the last moment, _Juno_ -style. I suggest to Giffin that her novels are “gently progressive,” and she smiles. “I like that,” she says.

“I don’t love everything in her books,” concedes one reader, Christine. “But I like that they’re a little bit different, and they make you think. _One_, I didn’t care for at all” — she gives a discreet nod when I mouth the words _One and Only_ — “but I suppose it just wasn’t meant for someone like me. And I really do love the others!”

When Giffin takes the stage, however, no such ambivalence is visible. She looks poised and pretty, hair curled and makeup flawless, dressed in a brightly patterned Draper James frock. “Everyone in Nashville is _so cute_ !” she enthuses, and a cheer goes up. There is a brief Q&A with the style blogger Liza Graves, in the course of which we learn that _Something Blue_ has been greenlit (ripples of excitement) and that _First Comes Love_ has reached No. 1 on the _New York Times_ best-seller list.

But the main event is the book signing; a line of readers snakes around the shop, and Giffin spends a long time with each petitioner — posing for pictures, engaging in conversation, smiling unflaggingly. Many women wait for hours — I will admit to getting barbecue during this portion of the evening, and retuning to find only incremental progress has been made. Several women have brought multiple novels for signing.

I spot one lone man in the crowd and make a beeline for this demographic anomaly. It turns out he and Giffin were fellow law associates in New York. “It’s really something to see this,” he says. “It’s a real contrast to her first book party. I think that was her … and me.” We look around at the excited crowds, the sweet tea, at Harriet snatching a miniature red-velvet cupcake from a silver tray.

After several hours of signing, when the last reader has departed, the last hug given, the last selfie hashtagged, an exhausted but exhilarated Giffin bids a warm farewell to the bookstore staff, and we all head back to the hotel. She and Harriet need to be up at 4 a.m.: the next day they have a daytime appearance and a girls’-night event at the rooftop bar of a DC hotel. The forecast is a muggy 90 degrees, which makes me wilt even thinking about it, but Southern women are tough.

_Sadie Stein is a writer in New York._