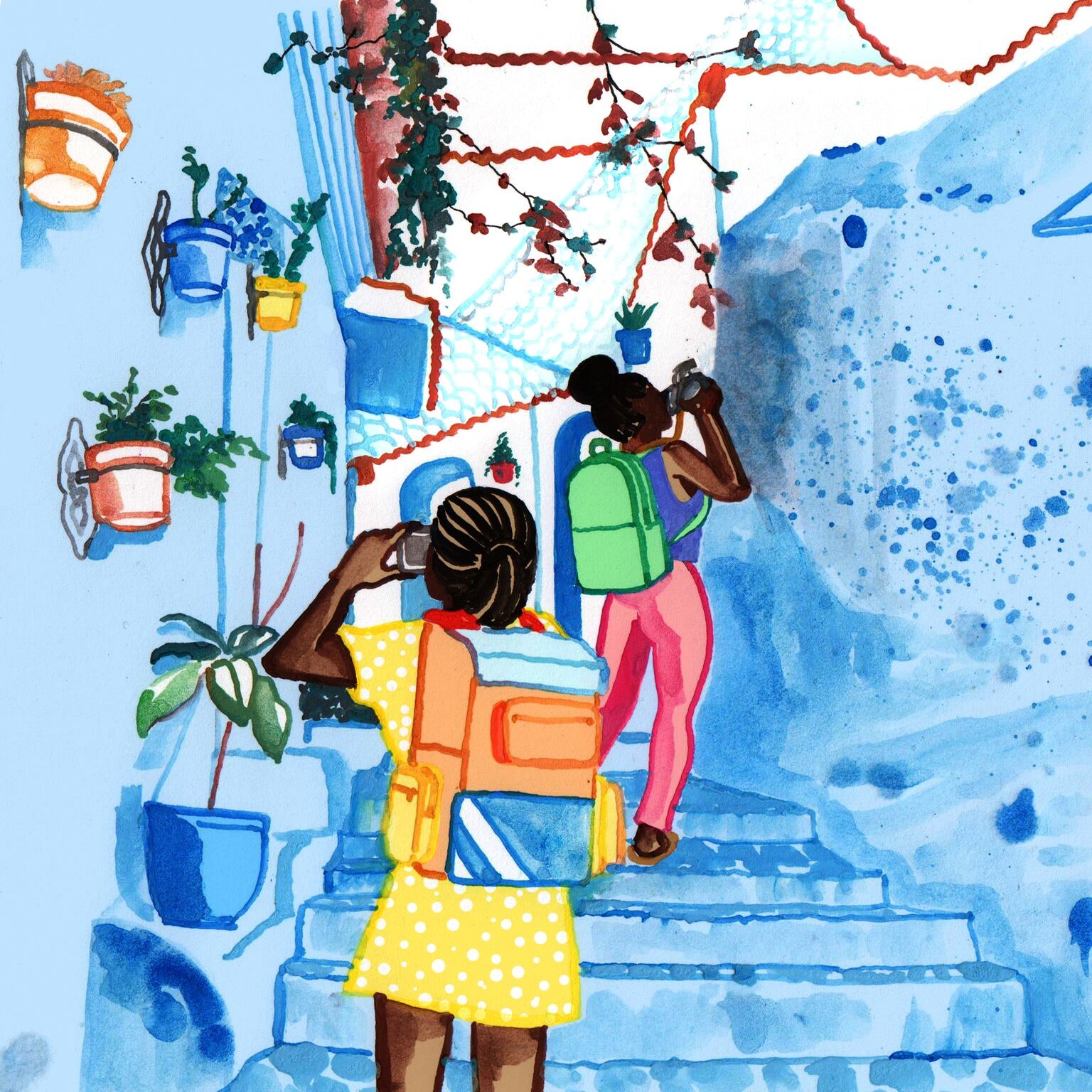 During the early days of Instagram, and even now, if you searched the hashtag #wanderlust, it might have taken several page scrolls to find images of black American travelers. And then, along came (1). What started in 2013 as a virtual community to showcase inspiring images and insights of black travelers has grown into not only a global (2) but also IRL experiences: facilitated trips intended to foster meaningful connections between fellow travelers, predominantly black millennials.

While Travel Noire leverages technology to drive greater awareness of and engagement with black travel, it builds on a (3) within the black community of guided and group travel, which historically was influenced by necessity — practical information-sharing about destinations across the United States that were welcoming to black people during Jim Crow. Travel Noire’s real innovation comes in the form of a platform that inspires the proliferation and accessibility of prideful imagery of black travel. And that’s what creates new possibilities for travelers today, according to the founder, Zim Ugochukwu.

What follows is an interview with Zim about growing a side project into a full-time business, the challenges of entrepreneurship, and how Travel Noire promotes black excellence.

**Meena Harris:** How did Travel Noire start? With the website or with your (2)?

**Zim Ugochukwu:** The first point of contact was the website, (4), which we grew to about 100 writers, who lived all over the world. They were travelers who wanted to share their stories and experiences about what it was like to travel as a person of color. From there, I went to Instagram, and it was such a challenge — it was like the burden of my life trying to find beautiful pictures of travelers of color! I would spend an hour trying to get one photo. But I knew in the back of my head: _If I post consistently, something will pay off._ So we posted twelve photos a day for eighteen months.

We then started offering free webinars and classes about how to travel for free, or how to convince your boss to let you work remotely. People started to gravitate toward that, so for the first eighteen months, it was just all about giving people what they wanted.

But if you go back in time to the beginning of TN, the idea came from my time living abroad in India. I had braids, and when I took them out, I thought that I could find resources on how to take care of my hair in India. All I found was “You can use this coconut oil, or you can use these Ayurvedic products,” and it just broke my hair. I realized there was nothing on the web about an experience like mine, so I thought it could be interesting to gather people together to bring that space to life.

That was kind of where the idea for TN was born, but it was still very much in its nascency. I didn’t even think about it much again until I had moved to San Francisco. I was working four jobs. I was a nanny. I was selling luxury sunglasses. I was just being a crazy person and sleeping on somebody’s couch for six months. When I got my feet on some stable ground after six months of hustle, I started TN. I just needed to be off that $3-a-day budget, so I could focus on other things.

> It was like the burden of my life trying to find beautiful pictures of travelers of color!

**MH:** You started off while having another full-time job. What was your approach back then to maintaining Travel Noire as a side hustle?

**ZU:** I was working both jobs for nine months. I didn’t know when exactly, but I knew that at some point — I had told myself July of 2014 — I would bounce from my job. The problem is, I got fired before that happened. Even at that point, though, people like Facebook and Marriott were reaching out to us because they were interested in what we were building. We were just a fraction of the size we are now, but that’s how I knew that we had a lot of traction.

**MH:** How did you transition into doing it full time? Was it difficult?

**ZU:** It was weird, because you go from working on it from 6 p.m. to midnight, and 6 to 9 a.m., to working on it from 6 a.m. to midnight. This whole world was unlocked, so I started to think about all the other things that I could do. My advisers even said, “This is what we needed to know, that you were 100 percent serious.” You can’t be 100 percent serious about something by just doing it halfway, so that was important feedback. How much more could I do if I gave something 100 percent versus the 50 percent or 40 percent that I had been giving it?

**MH:** It sounds like you received feedback that almost questioned your commitment because you weren’t working on TN full time. Recognizing still that so many people start off with a part-time project, what’s your advice for those folks?

**ZU:** My best advice is that you’re never going to be ready. People wait for the best moment, but you’ll never be ready for the change you’re meant to make. I think when people sometimes have these timelines in their head, like, “By this time, I’m going to leave. By that time, I’m going to do this,” then they just get comfortable. Sometimes you need an outside force to be like, “Sorry. Not today. This is going to be the limb that you’re going to be out on today.”

**MH:** You’re the daughter both of immigrants and of a single parent, and you’ve mentioned knowing about “being scrappy and stretching dollars.” Do you attribute your entrepreneurial sensibilities to your upbringing?

**ZU:** One hundred percent. We were on welfare. We were in shelters. We were everywhere. If you’re a first-generation American, you understand the struggle of what it was like for your parents to get to the country. Growing up, you would always hear about what they had versus what you have, and it was constantly a conversation about doing more with less. For those who’ve had parents grow up in another country, there’s a different sense of hustle that comes with that. It’s a “We all we got” type of thing.

**MH:** For TN’s digital images, you talk about depicting “beautiful images of brown excellence.” What does brown excellence mean to you, and how do you equate that with world travel?

**ZU:** It’s showing this life that people have told us for so long that we don’t have access to, or that it’s something we can’t accomplish. It’s seeing someone in Iceland, or under the Eiffel Tower, or just living life and being happy and feeling like they’re meant to be in that place.