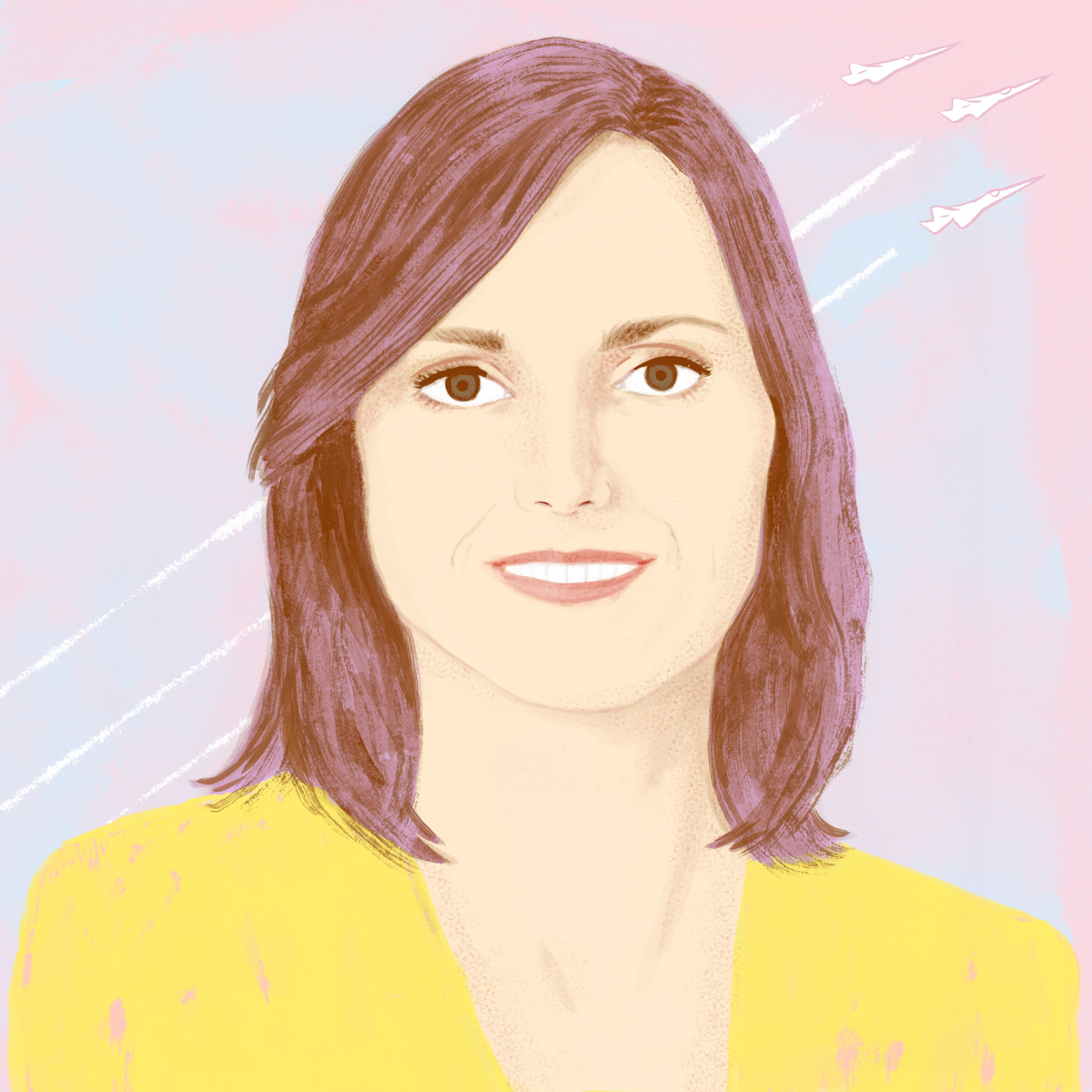 Growing up as the child of artists in the ’80s, I didn’t have much context for businesswomen. In my mind they were always wielding at least three car phones at a time while elbowing men down escalators and shopping for shoulder pads (1) by Kate Beaton pretty much says it all).

So it was pretty thrilling and surprising to meet Beth Comstock, the first female vice chair of General Electric and a bona fide businesswoman, and to learn just how intuitive and creative her job really is. She bashed my expectations into the ground as she opined on everything from science to accessorization — despite the campaign to #askhermore than about her style, I could not stop staring at her Art Deco Marni choker.

Beth is, by all accounts, a formidable star. But my sources (and, yes, I have sources) also told me that she is tireless and dogged in her pursuit to bring women with her, to invest in fledgling businesses, and to take a chance on creative ideas that most megacompanies would sneeze at. She’s a geek for science, a champion for women in tech, and a self-identified introvert. She’s a study in contradictions and a lesson to this downtown child that her early conceptions of businesswomen were as cartoonish as Disney princesses.

**Lena Dunham:** At Lenny, we profile a lot of people who are “creatives,” but so many of our readers are at the beginning of their careers and they really want to work in business. They’re inspired by women who are working in the corporate world in a creative way, like you do. I wondered if you could give us the “dummies guide” to your career trajectory.

**Beth Comstock:** My career trajectory makes no sense. Absolutely no sense. I got out of school thinking I was going to be a doctor. Then I really wanted to be a science reporter, so I got into media. But I was horrible on camera. Really horrible, really bad. I learned that I was much better behind the scenes. So I got into marketing. One thing leads to another, and I worked my way through NBC. Then I end up at GE, which was the last place on earth I expected to be. But it makes a lot of sense. I love science. My science background is a thread that goes through my career.

**LD:** In your past role at NBC/Universal, I know you were pivotal in acquiring iVillage, which was a media company that was aimed at women. I wondered what you thought about the current landscape of women’s media, and about marketing to women. Have you always been interested in women in tech and how we can use tech to reach women?

**BC:** I’ve always been interested in tech, and I’m a woman. I think it comes naturally. When I was at NBC and we acquired iVillage, what I didn’t appreciate was just how passionate the community of women around the site was. It was really the first Internet property for women. Teenagers would look up things like: *How do you know if you’re pregnant?* iVillage would answer those kinds of questions.

It was amazing what they did. iVillage doesn’t exist anymore. It’s kind of sad from that perspective. I think we missed our chance to understand that this community of women wanted to be engaged. They wanted to do something. They could have been a much stronger voice at NBC and in media, and that’s why I love what you’re doing. Tapping into the right voice that matches the people who want to come together is really powerful. I think that’s what you’re doing with Lenny.

**LD:** That means the world to me! I know GE has been seriously focused on supporting women in tech. I wondered if you could tell me a bit more about that, and when you really saw the critical need — not just for hiring more women, but also for infrastructure to support what they do.

**BC:** GE is a science company at our heart. We have science, engineering, technology. In the last 18 months, we’ve doubled the number of women tech executives across GE and we’re focused on driving our entry level engineering talent to 50 percent women. Which is great, but we can do better. People always say that if you’re in a certain kind of business— you’re in the aviation industry, you’re in the energy industry — it’s hard to get women to go into those fields. It actually isn’t. I could point you to GE’s aviation industry. At one point something like 75 percent of the people in aviation reported to a woman​

**BC:** That’s pretty amazing. You meet these women, they’re badass. They love science. I like to talk to them about how they take engineering into everyday lives. The tech director at our research center in upstate New York, she’s an amazing scientist. She also uses engineering to make these amazing cakes for her kids.

She puts all the rest of us to shame. She takes everyday examples and turns them into really great ways to teach her kids about science. I wish I had done a better job of that. I remember my younger daughter in fifth grade got invited to the math club. I was so excited: “How great for you!” She was like, “No. None of the cool girls go to math club.” I wish I could go back in time and say, “You be cool and you go into math club.” Because I think you need that reminder and you need to make it cool.

**LD:** Rumor has it that you have a pretty serious, excuse the parlance of our time, “girl squad.” I’d love to hear more about it. You were here today at the (2) to honor someone who you work with at GE. How do your powerful female peers bolster you, and what have those relationships meant to you?

**BC:** I love the women I work with. I love the power of meeting people and connecting dots and figuring out what you have in common and how you can help one another. I love what you said today when you were talking about Gloria Steinem. The way you’ve reached across generations. I think that’s very powerful.

I’ve tried to reach not only across generations, but also across different kinds of functions and expertise. To get women who are scientists together with women who are artists, and to get them to connect on a different level. Not to just connect about their work, but connect about who they are. I think it’s an obligation. I feel I have to help bring women along.

At one point I looked around, and most of those working for me were women​. I’m also a big believer in diversity. Diversity equals innovation. It doesn’t mean just women, you have to have men, too. So I felt bad about it. Should I be hiring different people? Then I thought: *In the scheme of things, there aren’t enough women here*. That’s my job. To keep bringing in great women and feel nothing more than pride at seeing them go.

**LD:** I’ve heard some rumors that in your personal life you’re a little bit of an *introvert*. But at the same time, it’s your job to build big relationships and make deals on behalf of one of the largest companies in the world. I wondered what that dichotomy is like for you. Not to report that anyone called you introverted as an insult — they said that in a loving way.

**BC:** That’s OK. I’ve been called much worse. It’s one of these things where you just are who you are. I started realizing that I was feeling awkward, and, to me, introvert sometimes is just another word for awkward. You know you meet someone, and you’re like, “Hi, how are you?” And they respond, “I’m fine, how are you?” And five minutes later, you’re still asking someone, “How are you doing?,” because you’re not quite sure what to say next.

So I had to learn that if I wanted to be good at my job, I had to put myself out there, because business is an extroverted activity. It was really hard. I’d get nervous. You have to get yourself psyched for it. I said to myself, “It’s holding me back. I don’t want to be held back. I’ve got to take it one step at a time.” So I’d meet one new person. The next day I’d try to meet two new people.

That being said, I think there are a lot of great things about being more introverted. I think you tend to observe things more. You aren’t always the one that’s the first one to speak. I’ve also come to appreciate the good parts about it and not just try to beat myself up because I wasn’t the life of the party. In fact, I’m never the life of the party. That’s another story.

**LD:** Actually, neither am I. You empower so many innovators, and you take risks also on small, little-known companies. I’ve heard on good authority that you bring young women along every step of the way. I wondered what gives you the courage to do that? What do you look for in the companies and people that you invest your time in?

**BC:** I think courage comes down to just believing there’s a better way. I love people who want to do better and be better. It’s really that simple. When I meet founders who are starting out, and they’re so passionate about being better, you just can’t help but want to help them. Young companies starting out, they want what we have: scale, access to markets. We want what they have: They’re agile, they’re fast. They’re clever. They see around corners. The partnerships between big and small are at the root of really great innovation. I try to find partnerships with people and companies that are very unlikely.

**LD:** I know that we all say that we need to ask women about more than their style, but I need to ask you about your choker. It’s so cool.

**BC:** Thank you. I was just saying to your colleague that this is my big stepping out at accessorizing. I’m not a big accessory person. It’s Marni.

**LD:** It’s beautiful. I think today a lot of people would remember you as an accessorizing person. They would come away believing that that was a huge part of your identity.

**BC:** Today was my coming-out party as an accessory person.