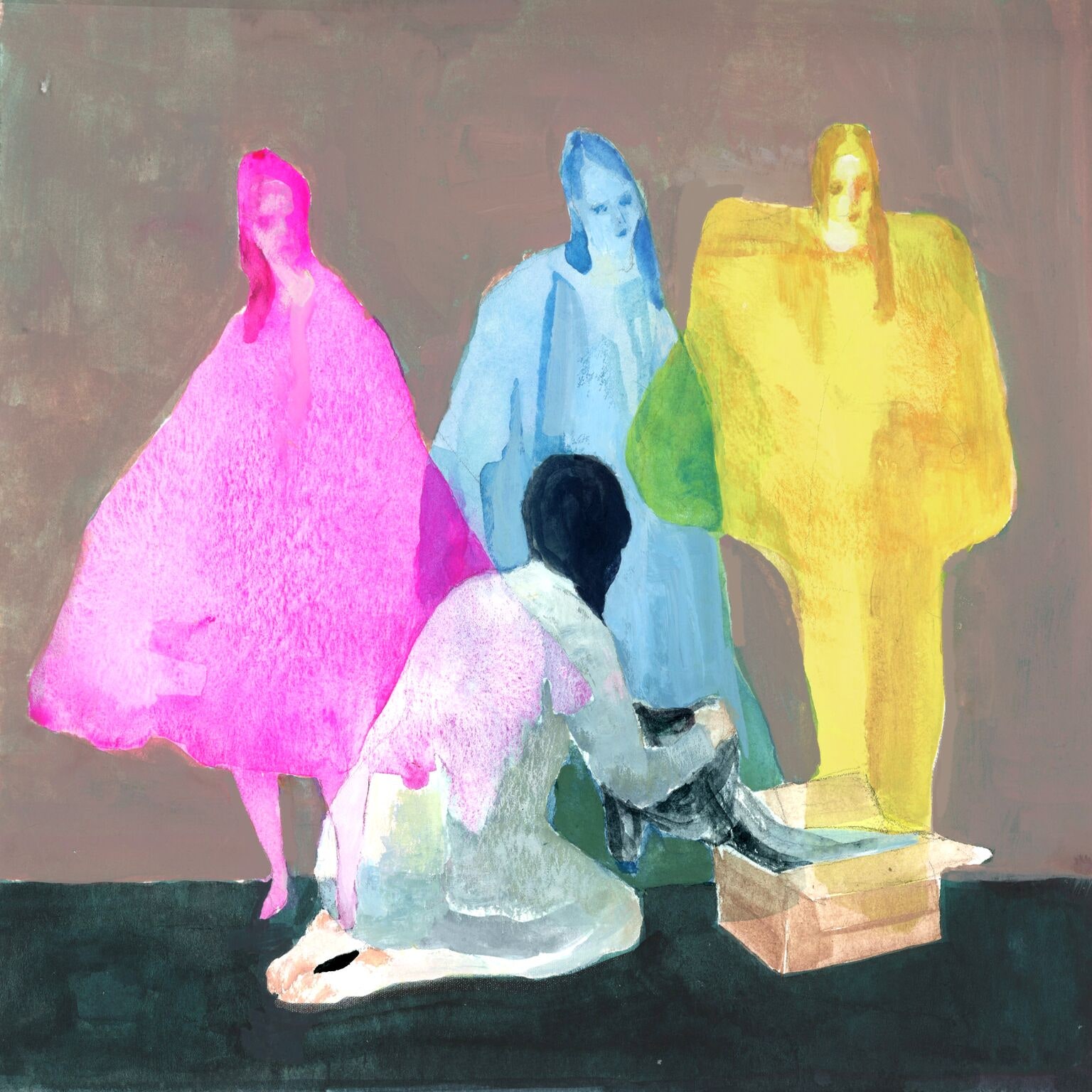 A few months ago, I found myself at Neiman Marcus in Palo Alto, California, speaking to an audience of women about my brand, Co. The store visit is a routine event done by designers to meet their customers. I never know what to expect of these trips and certainly didn’t expect this one would be as transformative as it turned out to be. Maybe it was my exhaustion from being the mother of a small child and running a company, or just that I was coming off a few difficult months in my personal life, but I was certainly more introspective than usual. I was mostly reflective about how I had ended up here, in fashion. I had studied film in college, spent the last twenty years making movies, or at least trying to, and in my late 30s I left a career I loved to start a clothing brand.

The manager of the store, who was interviewing me, began by asking me about my muses. I replied that my mother, Marcelle Danan, my aunt Perla Servan Schreiber, and my ex-mother-in-law, the artist Michele Oka Doner, had greatly influenced my life and style. All three were creative women with an extraordinary sense of self, and their commitment to live a deeply thoughtful life translated in the way they dressed. Perla wears only white (every single piece of clothing, including her undergarments, is white). Michele has one dress (one single silhouette) in ten different fabrics. And my mother, Marcelle, has never left the house without complete attention to every detail — always a piece of jewelry or a scarf to complete her look and never without her signature red lipstick. Like Coco Chanel, she believed that in order to be irreplaceable you needed to be different — to stand out. For each of them, their clothing is a form of personal expression, an extension of their inner self — and, as a result, they effortlessly exude confidence, grace, and style. Finding my own sense of self in clothing wasn’t quite so easy. In fact, I absolutely despised fashion for a long, long time.

> Finding my own sense of self in clothing wasn’t quite so easy. In fact, I absolutely despised fashion for a long, long time.

I grew up in the fashion industry in the ’70s and ’80s in both Paris and Montreal. My parents arrived in Canada from Morocco in 1973, the year of my birth, with very little money but fantastic taste and big dreams, and they did well for themselves in short order. My father had a prolific importing business working with some of the top French and American designers, such as Jean Paul Gaultier and Marithé + François Girbaud, while my mother designed her own collections, sold at department stores all over the world.

My father, who looked like George Clooney (I’m not kidding), basked in his success and wooed every pretty woman in town. My mother, who looked like Natalie Wood (I’m not kidding about that, either), navigated the ins and outs of a difficult marriage, escaping my father’s infidelities by pouring herself into her work while looking fabulous, and traveling the world hiding in ashrams in search of the woman she was meant to be.

Before I turned ten, I was what I think people would consider a pretty girl: long brown hair, big dark eyes, and always perfectly dressed in smocked dresses by Bonpoint. This all ended when, at twelve, I started to lose confidence in my body and therefore in myself; I began to gain weight, and suddenly the way people treated me shifted. My body was changing rapidly, and my mother, who was extremely thin and glamorous, was so blinded by her own problems that she could not take the time to explain to me what the changes I was undergoing meant. Instead, embarrassed by my appearance, she put me on a diet and had multiple friends of hers sit me down to explain to me that my weight gain would only make me miserable in life.

> Before I turned ten, I was what I think people would consider a pretty girl: long brown hair, big dark eyes, and always perfectly dressed in smocked dresses by Bonpoint.

I began to feel unloved because of the way I looked; it was an excruciating feeling, one that followed me for decades. The torment I felt at that age drove me to a suicide attempt, years of bulimia, and complete rebellion toward my mother: I gained more weight just to spite her, and I completely and vocally rejected her love. My upset was amplified by the fact that I was surrounded by incredibly stylish and beautiful women in a world driven by appearance.

I hated going to my father’s office. I hated the models, the runway shows, the fashion executives who looked at me with pity and condescension. I hated the fancy dinners my parents would host for designers at our home, and I would hide in my room or at a neighbor’s house until they were over. During that time, I swore to myself that I would _NEVER_ be part of that world.

When I turned eighteen, my father filed for bankruptcy, and I left home shortly thereafter. The relief was extraordinary. I was finally free from fashion. It had bankrupted my parents and broken my soul.

> The relief was extraordinary. I was finally free from fashion.

My freshman year of college, I enrolled in a film class called Understanding Film. The professor, Ray Carney, an expert on John Cassavetes, opened the semester with a screening of _A Woman Under the Influence._ There are very clear turning points in my life, which usually begin with a deep feeling of transformation and are quickly followed by endless tears, and this was certainly one of them.

I remember thinking: _You mean you can be strange and different and maybe even a little crazy and yet magnificent and still be loved?_ That realization persuaded me to major in film and somehow be involved in telling great stories about the magic that exists in all of us. Film, I felt in that moment, certainly had the moral high ground over fashion. (Well, actually no, but that’s another essay.)

After I graduated, I moved to Los Angeles and spent fifteen years working in film and television before a series of circumstances brought me face to face with fashion again, despite all my resistance to it.

It was the middle of summer, and my mother, who had recently moved to Los Angeles, called me to help her clean out her garage. As we unpacked the boxes, I began to revisit my childhood through all the clothes my mother had worn in the ’70s and ’80s: old Comme des Garçons, Yohji Yamamoto, Jean Paul Gaultier, Issey Miyake, and, of course, the amazing Donna Karan, whose career my mother had spent years trying to emulate. Those beautiful pieces represented not only my mother’s extraordinary style, but also all the pain I had felt as a young girl, my deep feelings of rejection and humiliation.

The clothes took me on a journey inward. Every piece, along with the pain I revisited, brought me a sense of relief and liberation. With every jacket, pant, dress, and sweater I was confronting my sorrow, which paradoxically led to embracing the power and importance fashion had played in my life. It also unlocked the door to great empathy for my mother and how she had so gracefully hidden the pain from the disappointment of her marriage behind her gorgeous wardrobe and so often used it to express her individuality and independence.

I felt a strong sense of clarity, and I began to dream of making clothes for women like me. Women interested in more than fashion. Women interested in art, film, books, and politics. Women with families and children and complicated lives. Women with careers who work hard every day and want to spend their earnings thoughtfully. Real women with real lives. In that garage on that hot summer day, my partner — the father of my son — and I decided to start Co. Co stands for partnership, the things we share in common, and inclusiveness.

> I felt a strong sense of clarity, and I began to dream of making clothes for women like me.

“What is fashion to you?” the Neiman Marcus manager asked me, a question I’d been asked dozens of times before. And in that moment it all came together: Fashion has, ironically, become the healing of my pain and former self-loathing and therefore a source of endless possibility for my growth. It has become an opportunity to understand and love my body, to understand who I am as a woman and what my true role is as a mother, partner, and fashion designer — and it has become an opportunity to hopefully inspire women to understand their own roles as well.

We spend so much time using fashion to fill our voids, to hide our bodies or exploit them, or, like my mother, as armor to hide from the world. Fashion is a wonderful tool, and ideally we use it as an extension of our true selves. As we rise to fight for our rights during these uncertain times, let’s remember that our strength comes from our rich inner lives and the extent to which we engage with the world. A pretty dress is a delightful companion, but only insofar as it is an accurate reflection of the woman wearing it.

_Stephanie Danan is the designer of Co. She lives with her partner, Justin Kern, and son, Jacob Kern, in Los Angeles._