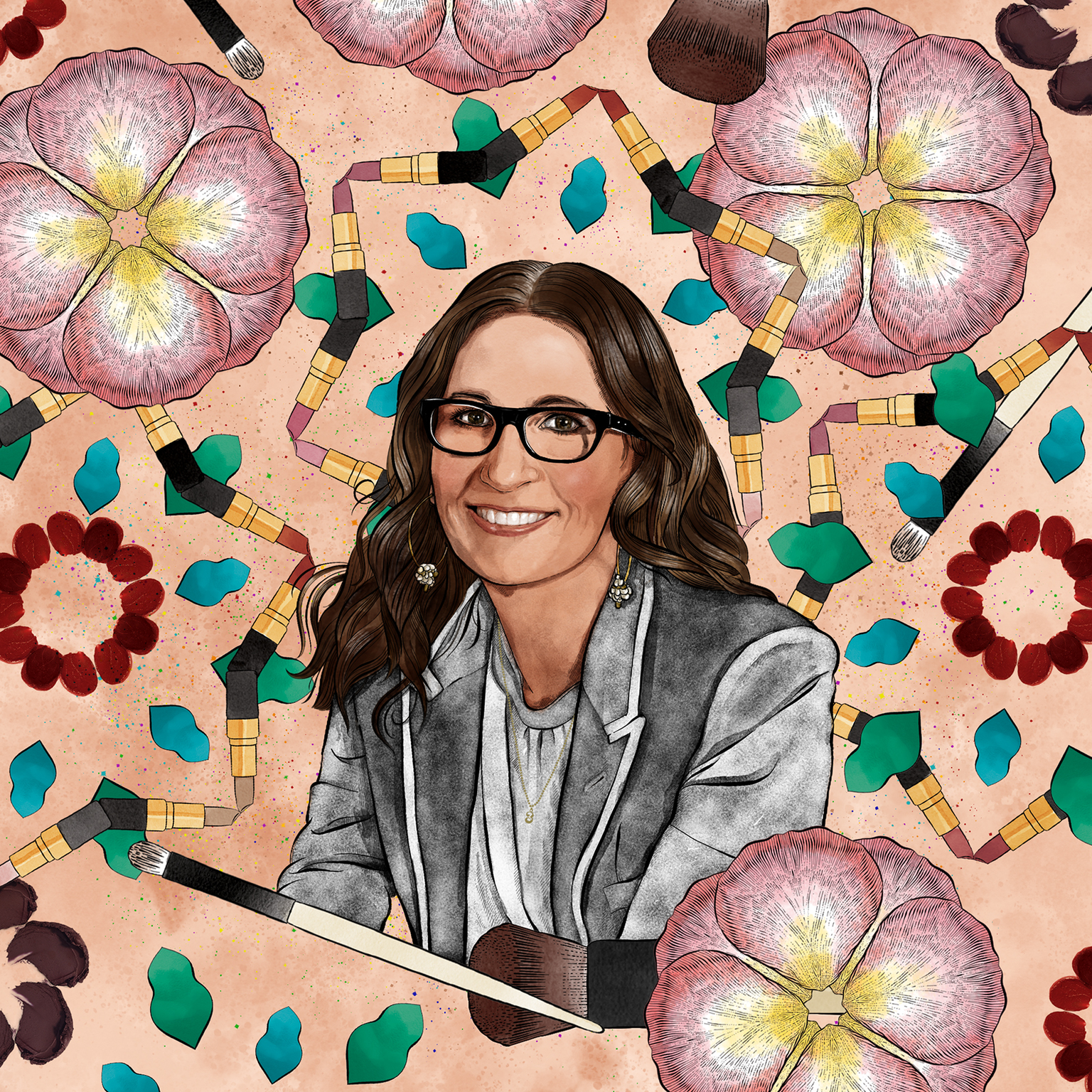 (2) is one of the most recognizable names in the beauty industry. You probably own some of her beauty products in their minimalist black packaging, emblazoned with Bobbi’s name in its signature font. Or you’ve at least stopped by her aisle at a (3) and gazed upon all the jars and compacts and sticks in every velvety skin tone imaginable. Hers is an empire built on following your instincts, regardless of how crazy they may seem to the people around you.

When Bobbi started out as a makeup artist in the ’80s, the trendy beauty look was over the top (as we all know from dressing up for one too many lazy Halloweens as “a person from the ’80s”). It involved as many colors as possible, intense rouging of the cheeks, and bright lipsticks — a lot of fuchsia and coral. Bobbi was not a fan of that excessive look, so she simply did not indulge in it. Instead, she stuck to her ideal of unadorned beauty and found success — see Naomi Campbell’s first-ever American *Vogue* cover, for which Bobbi did the makeup. She also started working with the photographer Brigitte Lacombe, who is known for portraits that capture subjects in natural light. By the ’90s, the artificial look went out of style, and a more stripped-back, bare version of beauty emerged, just in time for Bobbi to turn her aesthetic into a full-fledged business.

But the most important thing about Bobbi’s vision of beauty is that it is not defined by white, blue-eyed, blonde models. She did not see herself reflected in them when she was young, and when it was time to develop her makeup line, she was one of the first to go beyond “beige,” “peach,” and “tan” colors, offering alternatives for Asian and black skin tones. We spoke with Bobbi over the phone about tequila, making mistakes, and how turning down a dream job opened up the opportunity for her empire.

**Laia Garcia:** You’re celebrating your company’s 25th anniversary this year. What do you think has changed the most in the beauty industry since you launched?

**Bobbi Brown:** Oh, my God, so many things. I believe I was a pioneer of teaching women to feel good about themselves, to be comfortable in their own skin. To really discover what makes them look and feel their most beautiful. When I started, the way that people sold makeup was to tell you what’s wrong with you: “You’re too pale. Your nose is too big. Let me show you how to change the shape of your eyes.” From day one, I would teach women to do makeup based on the natural colors in their skin.

**LG:** I love that on your website, you have the makeup lessons tailored for individual skin tones and ethnicities. How involved are you in the day-to-day operation of your website? Do you come up with the content yourself?

**BB:** I’m completely, 100 percent involved in every little aspect. I forget that I actually sold my company over twenty years ago, and a lot of people don’t even know that, but I still think I own it. I’m able to change things when I don’t feel they’re going in the right direction. I have never felt happier and stronger and more clear that my original message of 25 years ago is the biggest message of the next 25 years, which is “Be who you are.” It’s empowerment. It’s confidence.

**LG:** I think it’s incredible that so many companies are still struggling with being more inclusive, and you’ve been doing it since the beginning.

**BB:** It’s really funny, because it’s such common sense. I channel my aunt Alice, who is the smartest and most practical 85-year-old woman you’ve ever met in your life. When I first launched my (1), we launched with ten colors. Number one was the palest I could possibly think of, and I had number ten, which was espresso. It was actually the color of a beautiful model named Waris, who I used to work with, and I could not find a foundation to match her skin. We sell very little of those foundations, compared to our best-sellers, but I’ve never discontinued it, because I want a woman, when she comes to my counter, to find foundation, concealer, powder, and everything else. I think now we have 28 shades. We’ve gone from one to ten, and now we’ve got 1.5, 3.25, 7.5. I’m not good at math, but I can kind of figure out where they go in the range.

**LG:** You started studying theatrical makeup in college, but you’re known for your bare, natural look. What was your college experience like?

**BB:** I loved it. When I found Emerson College, it was my third college. I transferred to Emerson with an idea to study makeup, which didn’t exist, and they allowed me to design my own major. So I designed a major in makeup, and a minor in photography. I didn’t know back then that that was called *being an entrepreneur,* and what I learned there is that what you put into something is what you get out of it. I volunteered to do makeup for every single thing I could. From films, to plays, to TV, whatever they had, and I studied the history of makeup.

I also didn’t know what I was going to do with it. When I graduated, I thought, *Well, maybe I’ll do the movies.* I did one movie, and it was so boring just sitting there, every day, making sure that the guy’s bruise didn’t jump across his face, that I started looking for something else. I thought I would do fashion on the side, and I just got hooked in the fashion industry.

I entered the fashion industry in the ’80s, when it was the most artificial that you could imagine. I had a lot of trouble doing makeup to make these girls look like everyone else made them look. I started doing a more natural makeup. I would show people my pictures of covers, and they’d say, “Oh, no, no, no. That’s not the right style. You’re never going to work. People don’t want that look. They want the other look,” but I just couldn’t do it. I just did what seemed right, and that’s how I live my life.

**LG:** Tell me about when you decided to start your makeup line.

**BB:** I had been a freelance makeup artist for many years. I was getting known. I had a *Vogue* cover under my belt, and I had done full-page beauty pictures in *Vogue.* I was doing all the top magazines, doing all the fashion shows. I had just coincidentally met the man of my dreams, who became my fiancé. I really didn’t want to travel, because my work took me to a lot of places. I’d gotten this amazing offer to go to Tahiti for three weeks with Bruce Weber to shoot a Ralph Lauren campaign at my top rate.

You’d think I’d say, “Awesome,” but I said, “No.” I was going to miss my fiancé, so I turned it down. By turning it down, I got a job to … I think it was for *Self* magazine, to do a story on small places to buy makeup in the city, which didn’t really exist back then. I did it, and I met a chemist. I talked to the chemist about making a lipstick that looked like lips, that wasn’t dry, wasn’t greasy, and didn’t smell bad. He said, “I can make it for you,” so after a few back-and-forths, I told him exactly what I wanted, and he made it for me. I thought, *Wow.*

**LG:** Had you already been thinking about it?

**BB:** No. I never thought about having a line, and I never thought about selling it. I honestly just wanted to make a lipstick, because I was always taking a taupe pencil, mixing it with a cream blush, putting a little bit of lip balm or moisturizer, and making this nude color that I couldn’t buy in the store. He made it, and I thought, *Wow, this is great.* Then I said, “I bet I could sell this.” Then I realized, *Well, not everybody likes that color.* Not everybody has the same color lips, so it won’t look the same on them. I asked the chemist if he could make me these ten colors that I thought would allow any woman to find her perfect red, her perfect orange, her perfect beige, her perfect lip tone, her deep lip tone. He said, “Sure.” He made them for me, and I started selling them out of my house.

**LG:** When did you realize that you needed to take your business to the next level?

**BB:** Immediately. Because I needed to scale up, and I needed a very different kind of organization. I didn’t know any better, but my husband and I had friends that were in the industry, and we became partners with them. The four of us started Bobbi Brown Essentials. I was going to call it Classics, and I’m like, “No, Essentials, because that’s all you need.” We called it Bobbi Brown Essentials, and I found a lab that was able to make them. We ordered the components, and a friend who was a graphic designer did the typeface. We launched ten lipsticks on a table at Bergdorf Goodman. I was still a working makeup artist, and the rest is history. Now it’s 25 years and three kids later.

**LG:** Who was your beauty icon growing up?

**BB:** My beauty icon really entered my life when I was in about seventh or eighth grade. When I was growing up, the only girls to emulate were models. Tall, blonde, blue-eyed models, or Barbie. I was a five-foot-tall, dark-haired, strong-eyebrowed girl. I always struggled with *Can I be that pretty*? because I didn’t look like that. No matter how much I dyed my hair, I *couldn’t* look like that. Then I went to see the movie *Love Story,* and I found Ali McGraw. She changed my life. Many years later, I got to meet her and have lunch with her, which was pretty crazy.

**BB:** No, no, no. I go to a restaurant, I don’t drink wine, so I have a nice tequila on the rocks. It takes me a long time to relax, because I go home, and I have so many things that I want to do around the house after I come home. But I do like watching TV. My favorite thing right now is the Lily Tomlin–Jane Fonda show, *Grace and Frankie*. Oh my God, it’s so funny. Love it.

**LG:** One last question, what is the most important business lesson that you’ve learned, that you think if somebody were going to start their own business, is the one that they should keep in mind?

**BB:** The most important business lesson I’ve ever learned is: Don’t ask anyone if you should do something. Just do it. If someone says no, just figure out how you’re going to do it. I know I keep quoting Nike, but just do it. Stop telling people what you’re going to do. Just do it already. So what if you make a mistake? Making mistakes is good. That’s how you learn.