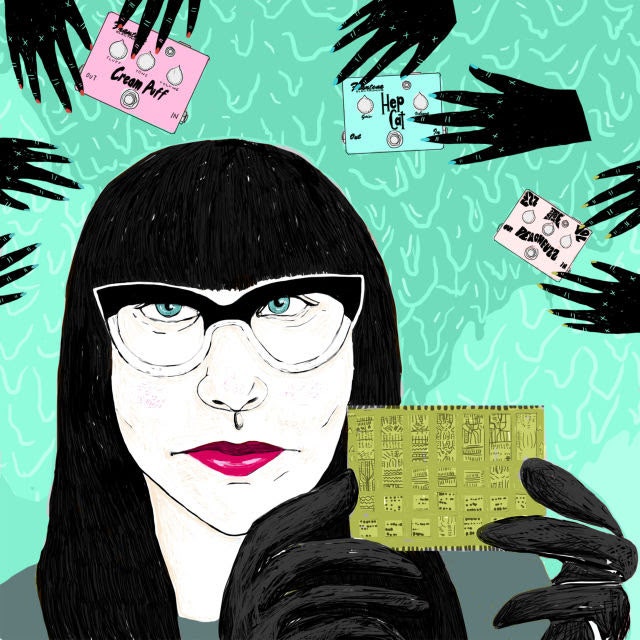 What would the opening riff to ” (6)” be without that (1)? Not as good. (2) without fuzz? Weird. “The Star Spangled Banner” without distortion? Patriotic. Musicians, to make use of these beloved textures, and to create their own signature walls of sound, need pedals — those things you see guitar and bass players stomping on while on stage, or fiddling with in the studio.

Like much of rock, and the world, the pedal business is dominated by dudes, with a few fearless women in the mix. Fran Blanche, creator of (7), is one of them. Since 1994, Fran has designed and hand-built more than twenty models of indestructible, candy-colored boxes for discerning guitar heroes. From the (8) (an overdrive pedal) to her lemon-lime Vibutron (an enchanting vintage tremolo effect), Fran’s pedals are legendary, collectible, and very beautiful.

After a prolonged hiatus, she’s revived the company and — thanks to successful crowdfunding campaigns — rereleased two of her classic fuzz boxes, the Cream Puff and the Peach Fuzz. She plans to have two more pedals back in production by September, and another five or six in 2017.

While “boutique manufacturing” sounds glamorous, Fran’s success — as an artist, a self-taught engineer, a working-class entrepreneur, and a trans woman in the man’s world of geekery and sexist merchandising — has been hard-won. Long hours, grueling physical labor, financial setbacks, and online abuse have come along with her success and cult standing. Her evolution as an inventor and a businesswoman is inspiring; so is her personal story. Fran is a behind-the-scenes type who has reluctantly made peace with life in the public eye — at least to some degree. In an economic climate where microbusinesses are social-media-fueled, and marketing your product means marketing yourself, Fran has carved out her own place.

As I researched her in preparation for this interview, I discovered, in her videos and writings, a wealth of wisdom and technical information. Restless creativity, self-effacing charm, and generous candor set the tone for her dispatches — see her refreshingly straightforward (3) (which feature Fran herself on “the shredcam”), and her electronics tutorials and vlog posts about trans issues. Over Skype (I was in New York; Fran was in Philadelphia, where she lives and works), we talked about entrepreneurship, sexism, gentrification, and survival.

**Johanna Fateman:** Tell me about the very beginning. How did you start your own business as a young person?

**Fran Blanche:** There was no plan. I didn’t grow up dreaming of building guitar pedals. I had a string of dead-end retail jobs in Central Pennsylvania; I bounced from one assistant-manager position to another every six months, it seemed. I made lateral moves for microscopic gains — like, I quit the shoe store to work at the video store so I could get that 20 percent discount on video rentals. I was going nowhere.

**JF:** I love your anecdote about wanting a Big Muff for yourself, for your own band, in the early ’90s, but not being able to afford it. So you figured out how to make your own! I’ve often picked up skills not because I wanted them per se, but because I was trying to achieve a certain thing artistically. Was it hard to do?

**FB:** I had been repairing and restoring antique radios for a while and learning electronics on my own in my spare time, so it wasn’t incredibly daunting. I used a Radio Shack enclosure and parts, and the designs were pretty straightforward and simple. I just worked it out on paper and then built it. A few years later, I wound up in New York working for Electro-Harmonix, and strangely, amazingly, designing the 2000 Big Muff for them. All because I couldn’t afford one!

**JF:** Then you left Electro-Harmonix to start Frantone, to go into business for yourself, again. You had a factory in Williamsburg, Brooklyn, right?

**FB:** Yeah, I did virtually everything myself back then. It was crazy. I manufactured all my circuit boards from raw, copper-clad stock. I would etch out my own boards, drill them by hand, fill them, and solder them. I painted all of my enclosures and did all of my own silk-screening. I did everything myself, not just to maintain product quality but because I couldn’t afford to pay other people to do it. Now I get help. At my age there’s just no way I can work those twenty-hour days anymore. It’s still all done by hand, though. I want the pedals to have subtle variations, to be like individual works of art.

It took about a year to get the first product developed and out to market. I really wanted to make a unique and fancy design, with a cool custom-cast aluminum case and really unusual finish and construction. I sculpted casting models, and had enclosures sand-cast at a foundry for the prototypes, and designed the circuit boards on paper, pen, and ink on velum. I invented a flocking technique to make the pedal’s finish actually fuzzy with real pink fuzz. It was all crazy expensive and hard to do, and the company was getting so far in the hole financially right at the start that I had to scrap these ideas and go with a different kind of design, using an already available enclosure and a finish that would be possible to build up at scale.

The other thing about my business is that I’ve been fleeing gentrification for over a decade. In 2003 the Williamsburg waterfront was rezoned and I was pushed out to Bushwick. Then by 2007 Bushwick was completely overrun! Now my neighborhood in Philly is completely gentrified. I’m waiting for them to double my rent and push me out to Jersey. The number of times that I’ve had to move my whole shop in the last twenty years, it’s ridiculous. There were times when I had to move the whole shop every two or three years.

**JF:** What is a day in your life like now, working at Frantone? What do you do?

**FB:** A lot of what I do is really boring. Managing dealers, finding parts, trying to plan my inventory months ahead so I’m not running out of stuff, bookkeeping, making sure I have money available when I need it. Eighty percent of the manufacturing business is business administration. The other 20 percent is actually building stuff. Probably like a tenth of a percent of it is the creative, interesting stuff.

**JF:** You’ve weathered some extreme criticism and trolling. And I’m so impressed by your online personality, your ability to create and promote your products in the face of sexism and transphobia. I know you’d prefer to be more anonymous …

**FB:** I existed completely off the radar for as long as possible. There wasn’t even a photograph of me on the Internet until around 2008, but after I was outed as trans, keeping silent about myself seemed to make everything ten times worse. I had to defend myself by being honest about myself and my history and my struggles. I didn’t start vlogging to help other people, actually. I did it to (9). I was saying, “If you want to throw shit at me, well, this is the face you’re throwing shit at.”

**JF:** I think it is really powerful to do that. A lot of people have the opposite reaction, understandably. Trolls drive them to disappear.

**FB:** Well, I tried that. If you don’t depend on the general public for your livelihood, maybe that could work. But I’m self-employed. I can’t work for somebody else. If I couldn’t do Frantone and I tried to get a retail job, I couldn’t! All they’d have to do is Google me. I have to be online if I’m going to eat. I have to do something for a living, and my life is too big to … to erase.

**JF:** Yeah, I mean, I guess there’s two ways of looking at it. You could see this as a constraint, like you don’t have a lot of options. I also see you as having a life with a lot of freedom, independence. What you’ve done is completely unique.

**FB:** I’ve never had freedom. My options have always been very, very limited. I grew up in a world where, from the time I was eighteen years old, I knew that the world did not have a place for me. If you’re trans, you’re not supposed to exist. If you continue to exist, everything is going to be very, very hard for you. You’re going to be poor, you’re going to struggle, you’re going to starve — and I starved — and you’re going to have to build everything for yourself. For most of my life, I’ve wondered if it was worth it. It feels like chiseling through a brick wall. I can’t even begin to tell you how tired I am — from the physical labor, and from the emotional toll of being a permanent outcast.

**JF:** And yet, despite the difficulties, do you see business ownership as a way to be independent? (4) you mentioned pitching a seminar to trans conferences. You wanted to talk about entrepreneurship as a good option for trans people.

**FB:** Yeah, but I was told that people at these conferences wouldn’t be interested in a lecture on entrepreneurship or self-employment. I wanted to talk about being able to live on your own terms by creating your own income. There are a lot of trans people who can’t get jobs because of society, because of disadvantages and discrimination. I see poverty as a fundamental issue for trans people.

**JF:** I think you have such an important perspective on these issues. Against the odds, you’ve created your own company, and in a very male-dominated field.

**FB:** Yes. Music merchandising — manufacturing, too — is a man’s game. There are a lot of women guitar players these days, more than ever, but as far as marketing goes, it’s still kind of like “Hooters with guitars.” I’ve had to be creative about how to market my products to circumvent the otherwise required (5). I try to let the product sell itself, by demonstrating its performance and sound.

**JF:** There are two things that I find incredibly alienating about going to Guitar Center or even a little boutique-y gearhead shop. One is the extreme sexualization of female guitar players, and the other is the mystification of the technology itself. You feel foolish explaining what you want or asking questions.

**FB:** Men are raised to always just jump in, even if they don’t really know what they’re doing. Women are raised to be cautious. You know, “If you don’t know anything about this, just stay out of the conversation, let the men handle it,” or whatever.

**JF:** Over the years, I’ve really pushed myself to think of, like, what’s wrong with bluffing your way through a situation? Go ahead and bluff, then go home and figure it out.

**FB:** That’s the thing. There’s a lot to be said for women changing the way that they view themselves in the world, and adopting some of these bluffing behaviors. It’s a big part of life. Whether you’re an entrepreneur or musician, you’re going to have to take risks. And you’re going to have to improvise all of the time. You have to be able to jump and take advantage of an opportunity as it’s unfolding, even when it’s not comfortable or safe.

_Johanna Fateman is a musician and writer, a founding member of the band Le Tigre, and a co-owner of Seagull Salon in New York. She is currently coediting, with Amy Scholder, a collection of writings by radical feminist Andrea Dworkin for Semiotext(e)._