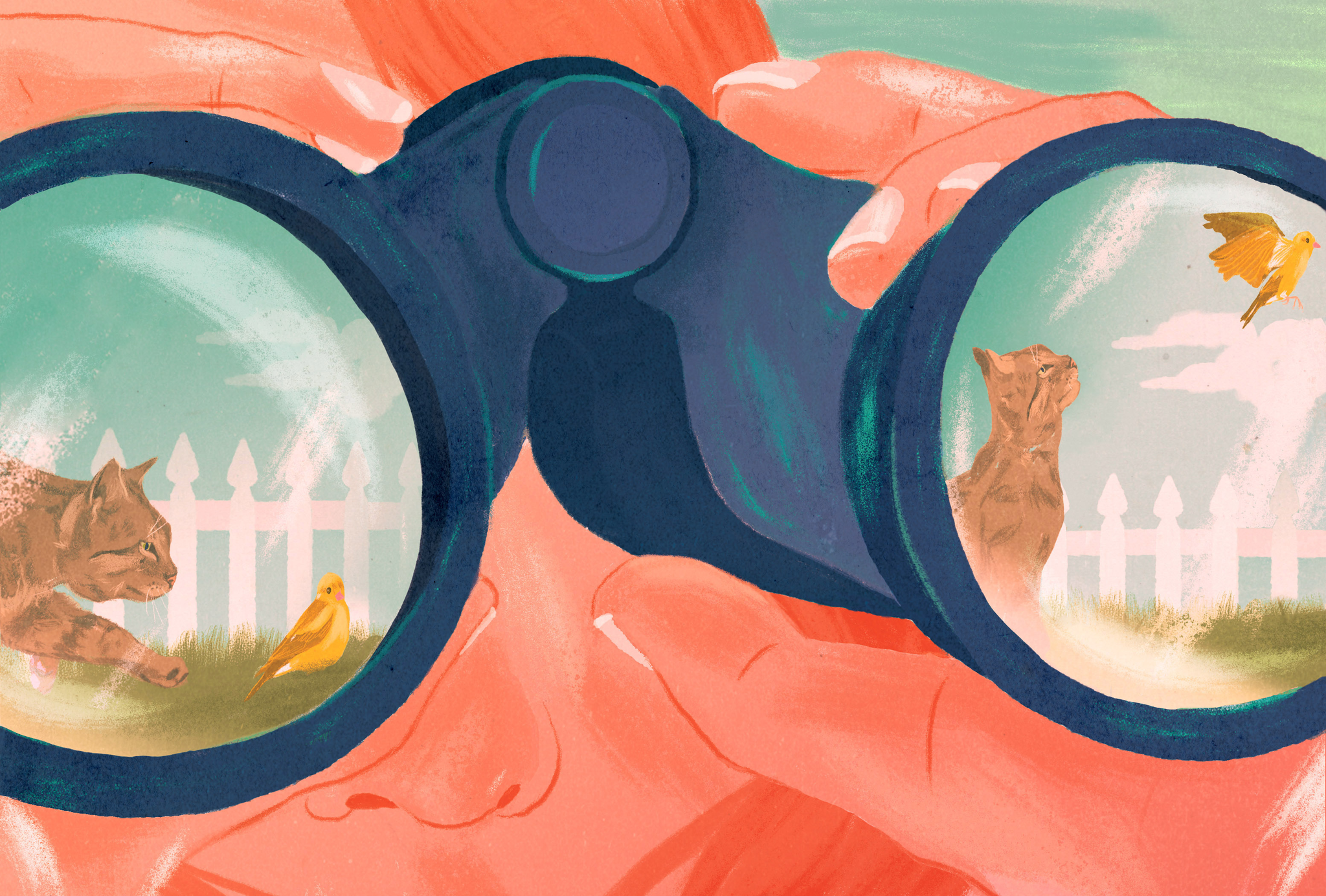 To be a woman is to know fear. Walking alone at night, even in a “good” neighborhood, on high alert, perceiving your own shadow or the echo of your chunky boots on the pavement as threats. The spike of adrenaline when a big guy with a wide gait walks your way, followed by the dip of relief (and then guilt) when you realize he’s just a tired citizen trying to make his way home like you are. The sense that if, no, when someone decides to invade your space, you won’t have recourse, skills, any power but your own yell.

Recently, I was traveling in Japan and found myself out at night alone, near midnight, looking for a small bar. It was hot: nearly 90 degrees with the sun down, and I wore jean shorts, a crop top, a backpack, and platform shoes. As I walked down an empty street whose name I could not pronounce, I felt something akin to joy, a lightness I didn’t recognize. And then it hit me: I felt safe. At night. By myself. It was an experience I hadn’t enjoyed in my hometown of New York, in my college town in Ohio, in my adopted city of Los Angeles, or in the Connecticut woods around my grandma’s house. It was new and it was exhilarating. It is nearly impossible to find.

When I spoke to Gavin de Becker, he confirmed what I had intuited: that Japan’s crime rate is almost comically low compared to any of the places I named, any place in America at all. He has made a science out of violence, studying patterns of culture and behavior that breed and promote it. I initially came into contact with Gavin, a man known for his expertise in protecting celebrities and political figures from threats of all kinds, when I was experiencing some nice low-grade stalking.

I had long been a fan of de Becker’s seminal book on self-protection: *The Gift of Fear*. The thesis of the book, which is too full of practical and empowering information to distill here, is that we (the human race and especially women) have lost our essential connection to fear and that this connection, when properly heeded, can protect us. But de Becker’s true passion lies in teaching women to protect themselves from violence of all kinds, particularly partner violence, which is more pervasive and insidious than any boogeyman could ever be and which so many of us forget to recognize or fear.

Speaking with de Becker, understanding what is ultimately his radical-feminist take on safety and violence, has made me an acolyte more than a client. Despite an aversion to press in recent years, the warm and generous de Becker sat down to talk to Lenny on Christmas Eve of 2015. He was Skyping from a breezy room at his home in Fiji, where he spends part of every year. Here, he discusses his upbringing, trusting your intuition, and the universal code of violence.

**Lena Dunham:** You talk, in your book * (1)*, about how you were affected by the violence your mother, a heroin addict, experienced and sometimes perpetrated herself. It allowed you to consider violence, to do research on violence, and ultimately to protect people from violence. Often people who grow up in environments like that become violent because they are enacting the things they’ve seen. What is it that you feel internally or that you saw that lifted you out of that circumstance? Why are you sitting in Fiji rather than jail?

**Gavin de Becker:** I became a kind of ambassador between the two worlds of violent and not violent. I’ve been in jail a lot, not as a prisoner but as a visitor working with various groups of people. There’s a line in (1), and I’m quoting somebody else, I don’t remember who it is, but where two brothers are speaking. One of them says, “Our dad was an alcoholic. Why didn’t you grow up to be an alcoholic?” He says, “Because Dad was.” Then that brother says to the other, “Why did you grow up to be an alcoholic?” And he says, “Because Dad was.” You can have the same raw material and people use it differently. I don’t know.

I was certainly afraid as a boy, so I had a close relationship to fear and uncertainty. I saw the powerlessness of women. Even in my mother’s violence was the effort to have ownership over anything. It happened to be us kids. The position of women is such that there is a great deal of desperation. I remember a decade or so ago, I read a book called *Excess Baggage*, and it’s a really terrific book about the psychology of women. The very first paragraph says, “I set out to write a book about women and depression, and it turned out to be just a book about women.”

**LD:** Something that I really took away from * (1)* was that so many women have lost touch with their intuitions because of a desire to appear nice, not to appear bitchy. A huge part of my childhood was my mom saying to me, “Never worry about being rude to someone. If somebody asks you if you want help carrying your bag, you can say, ‘Fuck off,’ and you can run away.” But a lot of people’s mothers didn’t tell them that.

I wondered if that’s something that you still see a lot of, women who get into unsafe situations because they felt as though they had to perform the role of kindness for someone who was ultimately going to attack them.

**GDB:** Yes, it is the primary strategy for persuasion predators. There are two kinds of predators. There is a power predator. That’s someone who charges like a bear and knocks somebody down, and that’s a very rare predator because it’s a much riskier thing. The persuasion predator actually persuades the victim to participate, persuades the victim to be in an environment that is without advantages, only has advantages for the attacker. The primary strategy of persuasion relies upon the idea that women have been taught that if you are aggressive in rebuffing someone, if you are rude, if you are a bitch, then that will cause violence. The consequence of that is violence.

In reality, in my entire career, I have seen no cases where somebody was attacked by a stranger as a result of rebuffing them or as a result of being a bitch. I’ve seen literally hundreds and studied so many where the decision of the woman to allow someone to remain in her environment because of fear about appearing to be not nice was the direct advantage that the bad actor used. This whole issue of being nice to strangers, I think women can take a real lesson from men on this. When I’m approached in a store and somebody says, “Can I give you a hand with anything?” and I say, “No, no thanks. I’m just looking,” that’s usually the end of the conversation. When a man says no, it’s the end of a discussion. When a woman says no, it’s the beginning of a negotiation.

**LD:** What you’ve said, both in the book and in my communications with you about my experiences with stalkers, was, “Do not give this person anything. Do not give them the sound of your voice.” These people, unwanted pursuers, they receive all communication in some way as positive communication. I think so many women have an ex-boyfriend who won’t leave them alone for six months, and they think they can bargain their way out. Your approach seems to be just to slice it off, right?

**GDB:** Yeah. Slice it off sounds like you’re talking about slicing off a guy’s dick, so …

**GDB:** You handle it however you want. I’m the last guy to say, “Don’t slice off a guy’s dick,” by the way. Anyway, yeah, you end it completely. The way I have found most effective in teaching on this subject is this: that that person rejoins the stranger pool. There’s another 300 million Americans out there that you have no relationship with and they’re not asking for one. This one you’ve specifically said you don’t want a relationship with, so he has less business in your life than the other 300 million people. If you don’t want a relationship, then he’s a stranger. He becomes a stranger again, and that is your right. It is your right to decide who is in your life and who’s not in your life. The moment he doesn’t listen, and the moment he persists, and the moment he stays with it, that ought to empower you to recognize how right you were in your decision.

When you engage, you’re engaging. There’s a thing you’ve read me say or heard me say, which is that if somebody calls you 30 times and leaves 30 voice-mail messages and then you call back, what he learns is that it takes 30 messages to get a call back. That’s not a big price for him to pay. He’ll pay the price of 30 messages, but if you never get a call back, it eventually ends, and people do eventually turn their attention elsewhere.

**LD:** Indeed. I know that your approach is very multifaceted, but if there were one thing you could say as a starting point for protecting yourself as a young woman against violence, what would it be?

**GDB:** It would be to look at nature and your nature and to not accept the scam that violence is a strategy only understood by men. There’s a universal code of violence, and that’s not a code you have to crack; it’s all inside you. When I used to give more speeches, I would ask audiences, “Is there anybody here who feels they could never hurt anybody?” A bunch of people would raise their hands and say, “I could never be violent under any circumstances.” If it’s a woman, I would say, “Well, what about if somebody was hurting your child?” “Oh, oh, oh, well then I could rip, burn, bite, scrape, scratch, poke, shoot, stab,” and so the resource is in all of us.

My answer to young women would be: Don’t buy the idea that you can’t understand violence. Learn about violence. Don’t be the only animal in nature that doesn’t. You think there’s a female kitten that isn’t learning about violence, or a female bird that isn’t learning about predation and isn’t focused on that subject? Why would you be the only creature in nature that is not endowed with a nuclear defense system?

*Lena Dunham would not hesitate to kick an offender in the balls. Whether she could actually hit her target is another question.*