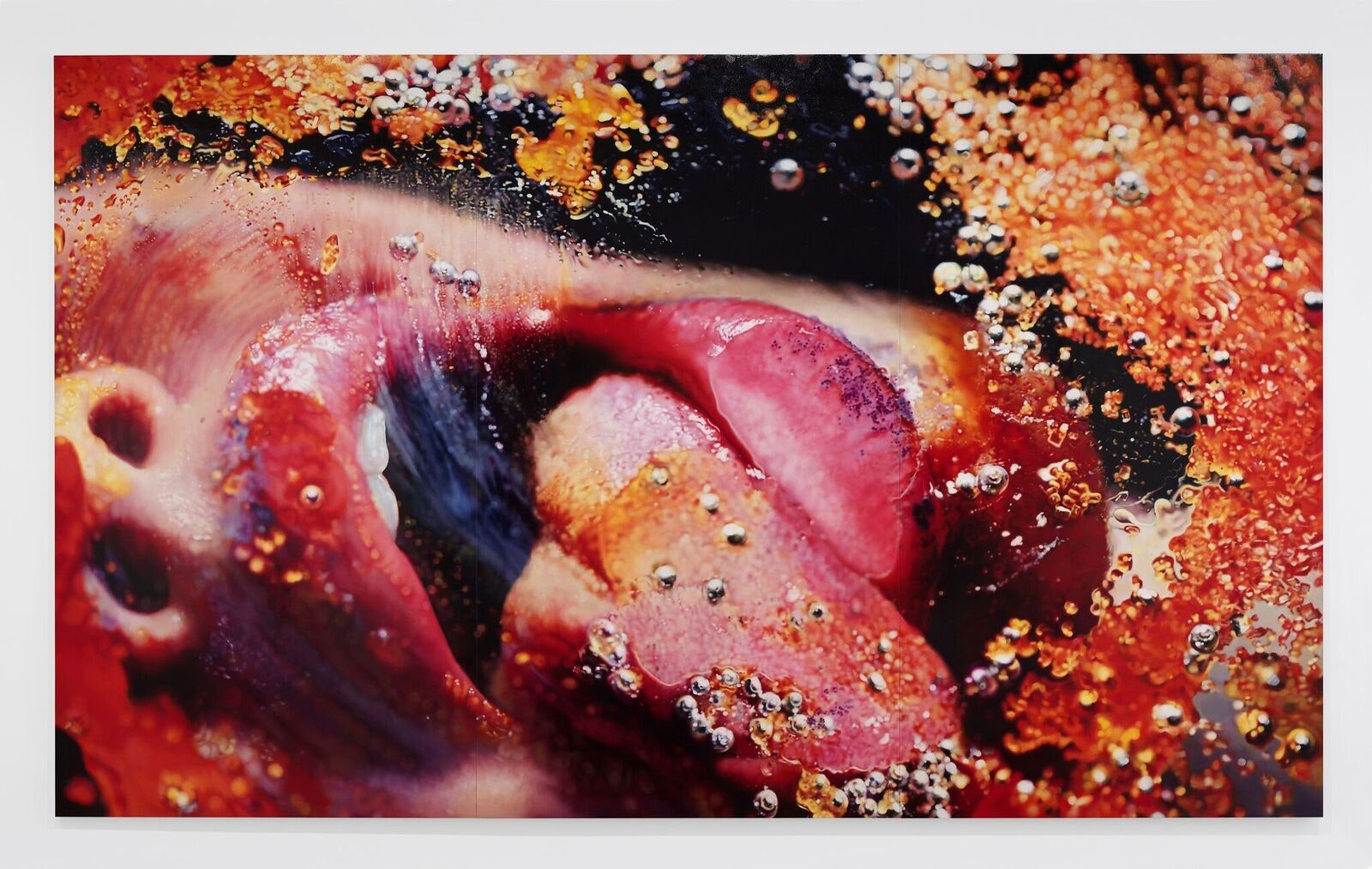 Marilyn Minter has been bringing an unapologetic view of womanhood to the art world for the past 30 years. Her most well-known works feature extreme close-ups of women’s mouths, overfilled with glitter or pearls; tongues become textured landscapes and papillae become the new erotic. Marilyn’s work was seen as highly controversial and anti-feminist by some in the ’90s. But this was a fundamental misunderstanding: her images served society’s expectations of women back to us, amplified. The best part about her porn-paintings series—many of them featuring (7) for a bottle of water or perfume and the images would just look like regular magazine advertisements.

Her work, which also includes photographs and videos, can currently be seen in a retrospective, which started at the Contemporary Arts Museum in Houston and will end at the Brooklyn Museum this fall. When you see her decades-long oeuvre, a story clearly emerges. From the photographs of her mother’s off-kilter glamour, to linoleum floors and disembodied women, her work keeps taking a closer and closer look at what it means to be a woman, at what makes a woman, as close as our pores and beyond. These paintings are extraordinary in person; there is a depth of color, the evidence of human touch that is imperceptible in pictures in books and on the Internet.

We met at Marilyn’s studio in New York City’s garment district on a warm afternoon. While we spoke, her assistants were working on beautiful large-scale paintings, dabbing away with their fingers on abstractions of women who seem to be standing behind heavily condensed glass. She has a show opening in tandem with her retrospective at the Brooklyn Museum this fall and is also hard at work on some impressive initiatives for Planned Parenthood. Marilyn talks a mile a minute, and she made me feel so comfortable that, without realizing it, I had put my leg up on my chair while we were chatting like I was hanging out at my best friend’s house. As she ate her lunch, we talked about the state of reproductive rights in the United States, Miley Cyrus, and the best way to deal with trolls.

**Laia Garcia:** So you have a retrospective that is now in Orange County and is coming to Brooklyn in the fall. What was it like when you first walked into your retrospective? Seeing all your works, all your children, together?

**Marilyn Minter:** I saw a real thread through everything. I knew that was probably there, but it was really clear as a bell. I’ve been working with the same thing over and over and over. I’ve been working behind glass, and then I’m working with broken glass. I grew up in Louisiana and Florida, and in Florida everything’s pink. In the ’60s and ’70s, I guess in the ’60s, it was all pink and green, pastel pink and green all through the paintings. Puerto Rico, all pink and green.

**MM:** That tropical palette is throughout everything I’ve ever done.

**LG:** What was your introduction to art when you were young? What was the first thing that made you want to be an artist professionally?

**MM:** I started drawing at five years old. I started working with glamour. I was born in Louisiana, but my formative years were in Florida with a drug-addict mother.

She was at one time a really beautiful woman, and she was very conscious of the way she looked. She worked on herself all the time, but it was always off, because she pulled out her hair, so she had to wear wigs; she had acrylic nails, but she didn’t take care of them, so fungus would grow underneath them, and it was kind of an *off-beauty*. She thought if she bought a bag at Woolworth’s it would be the same as a leather bag from whatever label that was popular in the ’60s.

It was fucked up, and I didn’t even think about it when I started working, but when I look at these drawings I made when I was nine, ten years old, they’re like glamour girls. I taught myself how to draw (1). That’s just how I checked out. I drew all day. I was the kid that you had to go shake in class, and it wasn’t like I was accomplished. I wasn’t good at anything else. I could get by in school, but all I ever wanted to do was draw.

**LG:** And then you went to art school. Did you major in painting?

**MM:** This was in the ’60s, when there were still art movements, and the school I went to was invested in, like, *this is the only truth*, and it was Abstract Expressionism. They were dismissive of Pop Art and Conceptual art, and I was totally drawn to Warhol and the Factory. had nothing but contempt for working from images that already existed. I got a C in painting, and I got an A in photography, so I decided to major in photography.

**MM:** Yeah, and when I was an undergraduate, I called the Factory to learn how to make silk screens, and they told me.

**MM:** I was ambitious. I just did things like that. I had no confidence, but I knew how to make a phone call. I was reading popular-culture magazines back then, and I saw the number to the Factory in a magazine. I read all the avant-garde magazines. I was and still am a voracious reader. I lived in bookstores.

**MM:** I was always for civil rights, and then anti-Vietnam. I worked for progressive politicians. I shut down the Pentagon. For reproductive rights, I went to Washington more than once, and I worked in (2), and I did all the marches.

I listen to talk radio when I’m painting, and MSNBC, CNN, and even Fox. I listen to everything, and I was watching these very clever states shame away all the things I, and everybody in this New York City bubble, was taking for granted. How they were rolling back reproductive rights in southern states with these … they call them (3), like the hallways aren’t big enough, or they have to be affiliated …

**LG:** Yeah, like when doctors who perform abortions need to have admitting privileges to local hospitals.

**MM:** Yes, exactly. You know, all those. Then all the Planned Parenthood centers accommodate those rules, and then they make another rule. This was before (4) even … seeing what was going on in Texas was driving me crazy.

Anyway, I do commercial jobs every so often, and I was asked to do this beauty campaign. I said I would do it if they donated my rate to Planned Parenthood. It took a month and a half to get that OK’d.

**LG:** You did a big benefit with Choice Works alongside Cindy Sherman and Laurie Simmons that raised over $2.5 million for Planned Parenthood. More recently, you collaborated with Miley Cyrus on a (5) whose sale also benefits the organization. How did that come about?

**MM:** Cindy, Laurie, and I raised that money just through selling art at the Sotheby’s auction, and then I got asked to be honored at the Planned Parenthood Women of Valor ceremony.

We thought, *Well, let’s make more money for Planned Parenthood somehow*, and we thought, *We just have to get a young spokesperson*. I thought, *Let’s ask Jeffrey to approach Miley*, because I know Jeffrey, and he had done a bunch of events with her. We thought that was pie-in-the-sky idea, but we thought it might be possible because we knew she was an activist. We emailed him, and he said, “That’s a great idea,” so we wrote a letter, a handwritten letter, to give to Miley. I think we had just given it to him, and then I just happened to go to this party at *Paper* editor Kim Hastreiter’s house. She’s a fabulous cook, and someone said, “Oh, this is Diane Martel, she styled Miley Cyrus for the cover of *Paper*,” which had just come out. I said, “Oh, that’s a coincidence. I’m about to ask Miley Cyrus if she’ll get involved with Planned Parenthood.” Diane says, “I’m her best friend,” and she FaceTimed her. We asked her right there, and she said yes!

**LG:** Ha, so easy! This all makes so much sense, because your activism feels like an extension of your art in a way.

**MM:** It does to me. This is the interesting thing. A lot of women artists are hugely supportive, but some of the males are too. When we did (6), we targeted the artists that make the most money at auction, like the Richard Princes and Richard Serras, and they all showed up for us with big priced items that were very salable.

**LG:** It’s funny, especially because in the ’90s your work was seen as anti-feminist.

**MM:** Mine was the image backlash, because women didn’t own sexual imagery. They weren’t allowed to have any. They weren’t even allowed to have images of pleasure. It was not allowed by the, I’d say, the doctrine of first-wave feminism. It was very threatening to them, because here I am, reclaiming it from an abusive history, and does it change the meaning? It frightens people. My side won.

**MM:** I did get thrown out of the art world. But my side won. Now it’s policing thought and trigger warnings. Yeah. You can’t police this. I think repression may be more dangerous. I believe you have to fight hate speech with good speech, not censorship.

**LG:** Speaking of, I went by your Instagram, and I saw that you were getting pummeled in the comments because of your support for Planned Parenthood!

**MM:** They’re just outrageous. Do you think it’s operatives? Because they’re so stupid, and they just say the same thing over and over and over, no logic at all, and then people counter them. We were thinking they’re paid operatives, maybe they seek out teenagers.

**LG:** I just don’t know. Do they have an alert? How did they even find your account? It’s not like you’re interacting with anyone.

**MM:** They’re all over Miley. I don’t get nothing next to her. But I retweeted them. I thought they were so funny. Then Laurie Simmons said, “No, the professionals say ignore it,” but I think it’s so funny! I’m really tempted. My team says, “Don’t you dare.”

*Laia Garcia is the deputy editor at Lenny.*