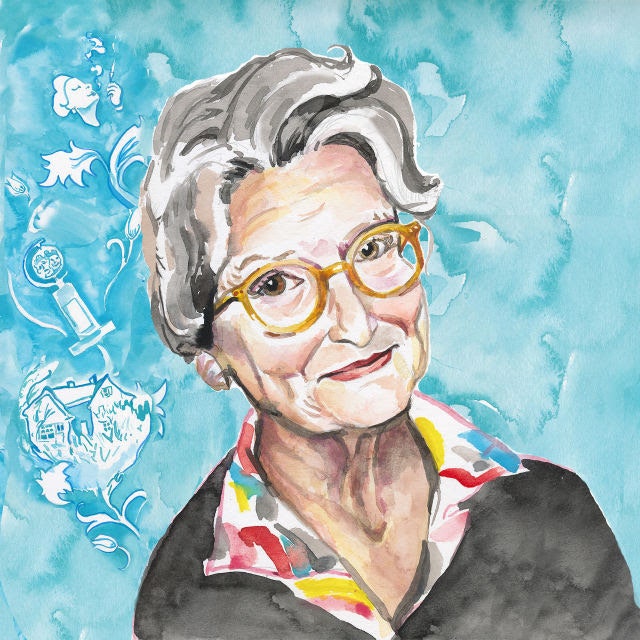 The first time I met Mary Louise Wilson was at a screening for _She’s the Best Thing in It,_ the documentary about her life. I was familiar with Wilson’s work — she’d won a Tony for her brilliant performance as Big Edie in _Grey Gardens_ and received critical acclaim for her play _Full Gallop_ — but I wasn’t prepared for just how much she, and the film, would inspire me.

Soon after, I bought her memoir, (1) _,_ and I couldn’t put it down. It was full of wit and humor and determination. With a stage and screen career that spans over 60 years and is still going strong — her most recent role was in the latest season of _Orange Is the New Black_ — Wilson has seen and done it all.

I was told that she doesn’t often do interviews, but I emailed her personally and hoped for the best. The following day I received a phone call from a number in upstate New York. An unknown, but familiar voice on the other line said, “Hello. I got your email. Do you wanna do it now?” No introduction was needed; we organized to meet at her Manhattan apartment.

“I have to hug you,” I blurted out, when we met the following week. “Well, OK then,” she replied. Without meaning to, or perhaps she was meaning to, she already had me laughing out loud. By her own admission, Wilson will do anything to get a laugh. At 84, the actress has bought her own tombstone, and on it the engraving: “She’s the Best Thing in It.”

In a West Village coffee shop, we spent an hour together talking about life’s great ups and downs, the glory of being in her ’80s, and why it’s so important for women to be funny.

**Olivia Clement:** My first question is inspired by the opening line in your memoir: you say you went from playing featured roles on Broadway to auditioning for bag-lady roles against actual bag ladies. You’ve experienced so many highs and lows in your career; what’s that been like?

**Mary Louise Wilson:** It’s hell, but it’s every actor’s story. You think you’ve arrived at some plateau, and the next thing you know, you’re not getting any calls. I’d heard that if you win a Tony, you won’t hear from anybody — I don’t know what that’s about, but it’s true.

**OC:** It’s also every artist’s story. Do you think that when deciding to take the creative path in life, you just have to be prepared for highs and lows?

**MLW:** I don’t do well with the lows at all. I don’t think any actor does. There have been times where I’ve felt like show business was a drag, but then something fabulous came along. Good parts are hard to find. Fortunately, there are a lot of good parts for older women. Between the ages of 25 and 60 is hell for a woman; you’re in no-man’s — no woman’s — land.

**MLW:** Oh, yes, because there are parts for mothers and grandmothers, but it’s still a man’s world. Tina Fey — God bless her — she said it best: (2). I loved her for saying that.

**OC:** Do you feel like there are more opportunities for women nowadays though?

**MLW:** In film, no, it’s stayed a male-dominated world. But television is taking over, and there are many more parts for women. Look at _Orange Is the New Black —_ you would never have seen a show like that a couple of decades ago. It’s loosening up in that way. I think it’s thrilling.

**OC:** In your memoir you say you’ve never been interested in being a star. Why is that?

**MLW:** I want to do the really interesting parts. It’s boring to just be the nice person in the middle — the pretty one. People respect you more when you’re not just being lovely.

**OC:** I’m fascinated by your relationship to comedy. You say being funny is the most important thing to you in the world, but you also associate it with a need to expose your flaws or, in your own words, to reinforce your lack of substance. How is that dynamic?

**MLW:** Maybe it’s a reverse egotism — like saying “Pardon me, don’t look at me,” but I really don’t mean that at all. It’s a strange contradiction. Comedy seemed to be something I just had. I just know it. It’s like having perfect pitch; you’re born with it and it’s nice to feel sure of something.

**OC:** I know some really funny people who use humor as a way of coping with difficult things. Would you say that’s true of you?

**MLW:** I do think that life is funny and you either laugh or you go down. In my family, growing up, there was a lot of anger going on at home, but we shared a sense of humor. It was our one bond.

**OC:** Is anyone ever intimidated by your sense of humor?

**OC:** What about certain people who think women can’t be as funny as men?

**OC:** There are some really wonderful female comedians out there right now.

**MLW:** Absolutely. I love _Broad City,_ those two women are hilarious; as well as Jennifer Saunders and Joanna Lumley of _Absolutely Fabulous,_ and Melissa McCarthy is great.

**OC:** Do you think comedy is liberating for women?

**OC:** So by being funny, we distance ourselves from being silently objectified?

**MLW:** I think there’s much more freedom in that. I really do.

**OC:** In _She’s the Best Thing in It,_ you speak very openly about overcoming alcoholism. Was there a moment when you had to be really honest with yourself about that?

**MLW:** I was so unhappy and so lonely. All I ever seemed to want to do is perform then go out afterward and get bombed with my friends. Then everybody started getting married and having kids, and I ended up drinking alone. I never drank while I worked, but I drank every single night. I never said to myself, “I’m an alcoholic.” I didn’t think I was, but I remember crossing the street to the liquor store one afternoon and arguing with myself: “Why should I give up wine? It’s my best friend!” Then one day I was going out to buy a bottle, and I just didn’t. And I didn’t again the next day, and the next. For a year I wasn’t drinking, but I was like a zombie.

At a party I was accidentally given some juice with vodka in it, and when I drank it down I felt this rush go all up my arms. I was suddenly frantic. I called a friend who told me to go to AA and say I was an alcoholic. I started going to the meetings, and eventually I came to life again.

I was already 50 and I didn’t think anything would happen if I didn’t drink. My whole life changed. I would never have written (3) or had the career I had after that. It’s such a tiny thing — one drink — but it’s a whole different world. It was a slow but huge awakening.

**OC:** Did you realize at the time that it was holding you back so much?

**MLW:** No. It was just a part of my life. But I was miserable, and there was no way that I was going to understand my own depression while I was drinking. I wasn’t present.

**MLW:** Wide awake, seeing and hearing everything that’s going on, and being able to hear what’s going on inside yourself. I feel self-possessed. It’s too bad it was so late, but that’s what it took. This is going to sound so corny, but life is a journey. Joseph Campbell wrote about the journey of the hero and heroine through life; in all the stories of the world, the hero goes through a kind of death in order to live. In one way or another, we all experience that.

**OC:** Sometimes when you’re really going through it, you forget that it’s all part of a longer story.

**MLW:** I think it’s hard to be young. It’s so great to be a woman at my age. Nobody asks you where your mate is. It’s wonderful.

**MLW:** People treat you like a jewel. They think you’re this great sage.

**OC:** They might think that because of the life you’ve lived. How would you define success?

**MLW:** Of course I do. But they don’t bother me so much. Things bother me less and less.

**OC:** In your memoir you speak a lot about dealing with rejection as a writer and actress, and the exhaustion of it. Is it OK to sometimes just be tired of it all? Do we always have to seem indestructible to be successful?

**MLW:** There are dreary phases you go through, and then you get interested again. That’s just life.

**OC:** Do you have any tips for dealing with rejection or failures?

**MLW:** Do your own thing. I always wanted to write my own show, and I’ve never been so happy as when I was writing _Full Gallop._ If meanwhile I was playing some uninspiring role, I didn’t mind because I was working on the writing of this fabulous character.

**OC:** You don’t seem to be showing any signs of slowing down. Will you continue to work as long as you can?

**MLW:** Yes. I’m drawn to complicated characters. I got a call last week to play a woman with Alzheimer’s and I passed. I’m only interested if she’s an old woman who robs banks.

**OC:** In the _She’s the Best Thing in It_ documentary, you tell one of your acting students that it’s impossible to be funny and a happy person. Do you stand by that?

**MLW:** I can’t say that’s a hard and fast rule, but most of the great comedians of my era were miserable people. I think comedy comes out of darkness because it’s about overcoming. We have to laugh at what is awful. And I think that if anybody’s really happy they’re boring!

**OC:** Yes, probably! Yet we’re living in an age where a lot of people are projecting the happiest versions of themselves all the time on social media.

**MLW:** It’s true. There seems to be much more pressure to be a certain way and to have your life be just great — exclamation point. That’s tough; you shouldn’t have to feel bad about feeling bad. I would not want to be young now. The world was so much simpler when I was growing up.

**OC:** You mention in your book that as a young person, you were self-conscious of being different and not fitting in. Is that something you value now?

**MLW:** I’m glad I thought I was a misfit because it made me leave New Orleans. I would have stayed and married some drunk, but instead I wanted to go where the rebels lived, in New York City. I wanted to be where the wild girls were.

**OC:** Would you tell your younger self to be less self-conscious about it?

**MLW:** I would. I wasted a lot of time feeling weird and neurotic when there was nothing wrong.

_Olivia Clement is a playwright and writer living in New York. She has always gotten along with people much older and wiser than she is — at least 50 years older._ ​