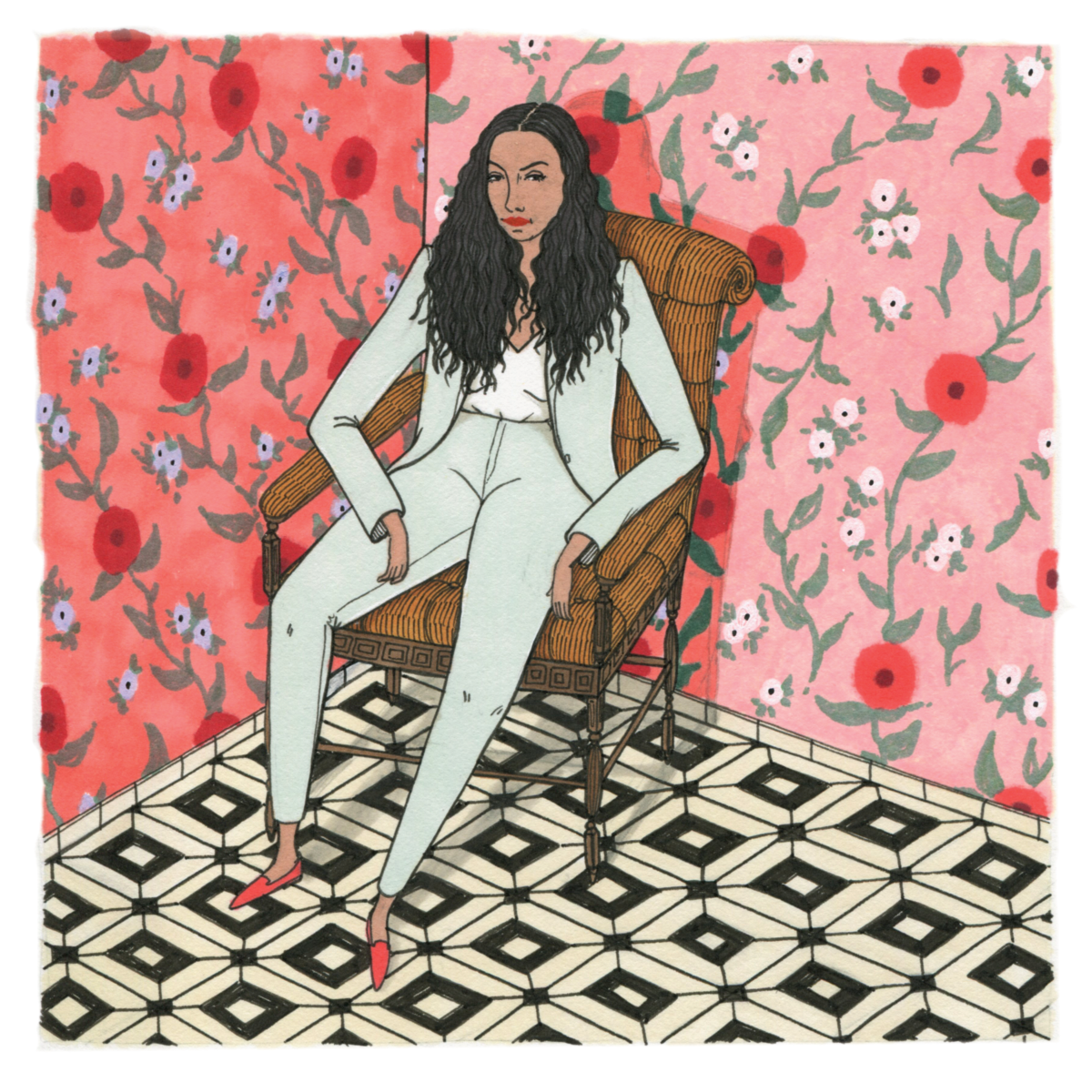 Melina Matsoukas is the woman behind some of the most iconic and influential music videos of the last decade. And when I say *iconic*, I mean capital-*I ICONIC*, videos that spawned a thousand feeble imitators, videos like Rihanna’s ” (3),” for which Melina won a Grammy (and was the first-ever solo female director to do so). She also directed “Pretty Hurts” and, oh yes, “Formation” by Beyoncé. Melina said working on “Formation” was “magical.” “We made a story about who WE are and the world chimed in and joined us. I am thankful to be a part of that conversation,” she told me. Melina has also worked with Ciara, Christina Aguilera, and Kylie Minogue. Basically, if you are a female artist breaking down barriers, you get Melina to direct your video.

Now that she’s reached the top of the music-video game, Melina’s decided to branch out into television. She signed on to direct and executive-produce *Insecure*, a new HBO comedy based on the book * (1)* by Issa Rae. It will be a while before we can see this collision of genius minds, but we’re confident it’ll become one of our must-see shows.

I talked on the phone with Melina, whose warm voice and chill vibes immediately put me at ease. She made me wish I were partying with her and her cool girlfriends (2)). We talked about the important things in life like naps, how female directors are a “growing breed,” and, of course, Beyoncé and Rihanna, the reigning queens of our heart.

**Laia Garcia:** Tell me a little bit about growing up in New York City. What were you like when you were young, and when did you realize that you were interested in filmmaking?

**Melina Matsoukas:** I grew up in the Bronx until I was about ten, and then we moved to New Jersey. I grew up in a very multicultural family. My mother is Afro-Cuban and Jamaican, and my father is Greek and Jewish. I felt the influences from all the different cultures — the stories, the ideas. And my parents are both communists and activists, so they’ve always been all about equality and doing something important with your life. I always wanted to do something big, I just didn’t know how I would go about changing the world.

I went to NYU, and I was always a good student, good at everything, but never really passionate about anything except for photography. Just meeting some of the filmmakers at NYU, I was like, “Oh my God, this is my way to change the world.” It was a way to make my voice heard, and also tell some stories and make change in a place that people like me are usually unheard.

**LG:** How did you get into making music videos?

**MM:** I’m definitely an MTV baby. I love music. My cousin was head of production at this very small production company in New York, so I assisted her. As a filmmaker, it was a great foray into this world where you could be experimental and you could learn. It’s really the only genre in film where the director has a lot of control and you can kind of do anything. You could do something fashion oriented. You could do something super-political. You can tell a story or you can not. It’s a nice way to hone your skills and flex that muscle and also just be creative. I still love it.

**LG:** I grew up obsessed with music videos, too, and it’s strange how very few female music-video directors there are. Like, there was Tamra Davis …

**MM:** I mean, Diane Martel was one of the first ones I remember. She’s now really reinventing herself and doing things, she’s awesome. Floria Sigismondi and Sophie Muller, just the fact that I can name the three of them.

That’s really across the board with filmmaking. It’s so insane how few female directors there are. And then female women of color directors as well. It’s not a dying breed … maybe a growing breed.

**LG:** A “growing breed,” yes! You were the first woman to ever win a Grammy for directing a music video, for Rihanna’s “We Found Love.” Can you tell me about creating that video?

She called me and was like, “Go all the way there with it, and don’t be scared to take risks. Do something dark. Do something that doesn’t have to be censored,” and all that. That’s why working with her is great, too, because you get to have that freedom to really develop your ideas.

**LG:** I want to hear more about your forthcoming HBO comedy *Insecure*.

**MM:** It’s starring and created by Issa Rae, who is an amazing comedian, and writer, and actress. It’s essentially a story about a black woman navigating life, and the racial hardships she faces in work and at home and in life, and her love life. It’s also about not fitting into any kind of box, and not seeing yourself in this one way that’s supposed to be acceptable, or what people think of what black means, or what a woman means, not fitting into this world and trying to find your own identity and space in it, and it’s done with a lot of humor.

Actually, today is the first day of the writers’ room, which I keep dying to go into. I’m like, “Issa, can I come? I have notes.” And she’s like, “Please leave me alone.” \, “I’m here with my notepad. Just let me know.” I’m trying to give them a couple days before I go and meet all the new writers. It’s a really great group. They’re in there developing and writing what’s going to be, I hope, an amazing series. I came on as executive producer. I’ll probably be directing about half of them and bringing other directors in.

**MM:** I’m a really bad practicing Buddhist, but I chant every day before I go to set, which helps me to center myself and focus. My practice is not very strong, as strong as it should be, but I definitely chant. That’s just to relax my nerves, and to focus, and chant to the power within yourself, and give you that kind of thing. When I’m shooting, I’m so nervous. Until we get that first shot, my stomach is like a thunderstorm.

It helps me work better, because if I’m not nervous then I’m actually nervous about why I’m not nervous. I think I perform better under pressure. I remember on the pilot I was like, *I want this feeling to go*, you know, that anxiety. Living in anxiety is not fun, but it might be necessary for the kind of work I do. I try to sleep when I can.

**MM:** I do nap. I love napping. I just don’t get to sleep, especially when I’m working. I’m not one of those people who can get by without it. I like to be home reading, watching TV if I can. That obviously helps me to relax. When you’re working it’s hard to do all of that.

**LG:** Can you tell me a little bit about working with Beyoncé? What was it like working on *Beyoncé*, her secret record and music-video project (or is it experience?), and the “Pretty Hurts” video?

**MM:** I really didn’t know it was a secret until maybe a couple of days before everybody else did. I think when we shot “Pretty Hurts” it was at the beginning of her shooting. Obviously we’re friends. I see her all the time, and she’s always shooting. She’s Beyoncé, and she’s always shooting anyway. She’s a workaholic. That’s why she’s so amazing. She’s into every aspect of her artistry, and so involved. I was already used to her working nonstop. I didn’t realize she was doing all those videos to be released on a secret project. I just thought she was doing what she normally does.

**LG:** Can we talk about your Instagram? It’s better than most fashion accounts! I love it because I feel like a lot of people are like, “Blah, blah, Instagram looks fake.” Your pictures are obviously really well lit, and well shot, but it’s still very natural. It really does feel like this is just your life.

I obviously love fashion. It’s another part of me. That needs to be said, as a creative person, and just as a woman. I also feel like when you look good, you feel good. It makes me happy. I don’t care where I’m going, I always like to … well, not always, because right now I’m dirty and look crazy, and also when I’m working I also look crazy. When I’m not in the middle of a shoot, I like to try to pull myself together and look halfway decent.

**LG:** When you look at your career path, was it deliberate? Did you visualize it?

**MM:** I definitely visualized it. I think I saw myself getting to this point probably a little sooner, honestly. I don’t know. I’ve always been that person that sets a goal and works toward it. I was taught that I could be anything and do anything I wanted. I think the biggest challenge as a young person was trying to figure out what I wanted to do, and what my goals were. Once I found my passion and I had something to work toward, it was like, *When is this going to happen?* I really try to plan my career as best I can and make the right choices to brand myself, and get to where I need, and make sure that every choice in life that I’m making is building toward the bigger vision of where I want to be.

**MM:** I think that every day. I’m always overwhelmed. Well, not always, but I definitely get overwhelmed and I’m like, “How did I get here? This is too much pressure and too much on me.” It’s scary a lot of times, which I think probably happens when I smoke too much weed and I have a panic attack.

**LG:** Yeah, you can’t do that. Then you get paranoid about everything.

**MM:** I can only smoke when I have no work. Then I’m like, “OK, I can smoke now.” It’s obviously a lot of pressure. I think also, being a woman in what we’re doing, and being a woman of color, it puts a lot of pressure on you to deliver, and to say something, and to do it right. You are, whether you want to or not, paving roads and making room for the next person to come. There’s a lot of eyes watching. You don’t really have a choice, because there’s not a lot of us. We have to win.