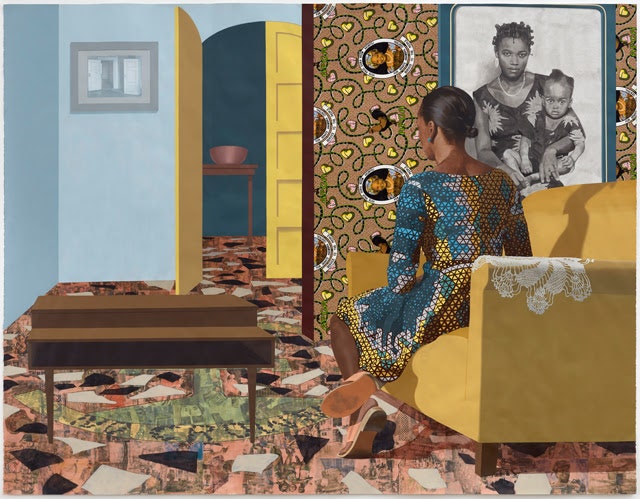 Nigerian-born painter Njideka Akunyili Crosby’s vibrant, large-scale renderings of everyday life can appear simple from far away (or online, where I first encountered her work). But her scenes of domestic life carry deep complexities in both form and content, tracing the artist’s personal history as an immigrant, as a woman, and as an artist to create arresting depictions of intimate life: whether it’s a shared quiet moment with her husband (Her Widening Gyre, 2011) or a table set for tea (Tea Time in New Haven, Enugu, 2013). Akunyili Crosby’s works are multilayered both in their materials (she uses paint, charcoal, pencils, fabric, paper transfers, and collage) and in their meaning — she explores questions of cultural identity, relationships, and geography through portraiture, interior space, and objects. I was instantly drawn to the way she uses textures like Nigerian portrait fabric and symbols like food labels or magazine clippings to weave together memories from her childhood in Africa and her adulthood in the United States, creating her own cultural touchstones in the process.Since receiving an MFA from Yale University five years ago, 33-year-old Akunyili Crosby has worked almost nonstop, building an impressive CV of prestigious art prizes and gallery shows across the US and in Europe. She has shown work at the Museum of Modern Art, the Norton Museum of Art, and the Whitney Museum of American Art, where Before Now After (Mama, Mummy, Mamma), 2015, was part of the Billboard Project in Manhattan. In advance of her latest show, Portals, at the (1) gallery in London (where she is represented), I talked to Akunyili Crosby by phone about her pop-culture fascinations, her switch from pre-med to art, and adjusting to her new life in LA, where she lives with her husband.

**Mannish Aggarwal-Schifellite:** When did you decide it was time to pursue art as a career?

**Njideka Akunyili Crosby:** In college I was going to be pre-med, so I was taking a lot of calculus and science classes. I wanted something light , and that’s how I took my first painting class. I ended up doing a double concentration in studio art and biology. By the end of my time at I was on the fence about which way to go, and I took a year off, went back to Nigeria, worked for a year, and then decided I wanted to be an artist. I think what it came down to for me was a sense of urgency. This was in 2004 or 2005, and it was a very exciting time in Nigeria. There were just incredible explosions of culture with literature, with music, with Nollywood , with fashion. Different industries were booming and blooming, and people were doing incredible things. There was just this collective sense of feeling like our stories are valid and we’re going to and not make other people do it for us. I was so thrilled by it that I wanted to contribute anywhere I could, and art felt like a way to do that.

**MA-S:** Location and culture really play into a lot of your paintings. You live in LA now. What’s that transition been like?

**NAC:** I came to LA two years ago , and I’m finally seeing LA creeping into the work. The first thing I noticed was something about the color reflecting the lights of the place I was in. We moved into an apartment with big sliding-glass doors that overlooked the pool, and it reminded me of David Hockney. I started making works with plants when I was on the East Coast, but the use of plants in the work has kept evolving and developing since . For a long time I used houseplants I photographed on the East Coast and a local root tuber from rural areas in Nigeria called the cassava. Then, when I arrived here, I decided to do more elaborate plant scenes, and I found myself walking around my studio, just photographing plants I saw. Plants can be markers of location and markers of place, but also sometimes markers of how people have moved from place to place. I think I’m getting to a point where I’m curious to see what happens outside the space I’ve been creating. I’ve been doing a lot of pieces with portals or openings into the outside world a lot of windows and doors; that’s where the gardens come in.

**MA-S:** Why do you focus on domestic spaces in your work?

**NAC:** There’s an intimacy I’m interested in capturing in the work, and I think the domestic space lends itself well to that. The work really comes out of my life, and for a long time I dealt with images of the couple, which was based on my husband and me. When I got to a point where I felt I wanted to remove the figure for a while and develop the space without the figure, I did it in little increments. I’m also very interested in how collections of objects become specific markers of things that tie us to a place and a time and experiences. One example is a work I did that has an image of a table that I got from my husband’s grandmother, and on top of that table kerosene lamps and different objects that I photographed from my grandmother’s table in the village in rural Nigeria.

**M-AS:** How do you decide what objects to feature?

**NAC:** I look for things that are tied to my life experience, like a couch from Ikea, which I really associate with my various American apartments, an electrical device like a fan box — the mechanism for turning on a fan — that I associate with architecture in Nigeria. I’m always trying to look for a visual equivalent of my experience.

I have a number of our family albums, and I will go through them slowly, an inch at a time, and look through every picture, looking at corners, walls, ceilings, like: _What are those things I’m overlooking?_ I think in 2011 I wanted to use some pictures of these stones that are broken and embedded in the floor called terrazzo. In Nigeria it doesn’t happen anymore, but in architecture in the ’80s people used to use it. I wanted to do a piece that had a terrazzo floor, and I couldn’t find it on Google. It was one of those things where I thought, _A house in the village is filled with this._ I go home, it ends up being like a foraging trip. I’m always excited when I go home because I have a list of things that all through the year, and I can just take lots of images and pictures once I get there. really becomes this space of confluence or contact between multiple times, people, places, cultures.

**MA-S:** You also use a lot of pop-culture imagery in your art. Do you find that there are certain pop-culture products that you return to a lot?

**NAC:** I have a few pictures that you can spot almost in everything I’ve done. I have this one image I use a lot of this album cover of a Nigerian musician wearing a red jacket that looks very much like Michael Jackson. It’s a way to think of how American pop culture became a big influence in Nigeria starting in the late ’70s. So much of that influence comes out in our pop culture, but the fascinating thing about the pictures is this idea of mimicry . Homi Bhabha talks about mimicry not being a perfect copy, and it’s in the imperfection of mimicry that new culture actually occurs. I’m also looking for this thing that taps into collective memory. Everybody in the country who grew up in the ’80s consumed the same thing, so we all knew the same songs and the same TV shows and the same Nollywood stars and musicians. I feel pop culture is such a fascinating way to map all the various influences in Nigeria, and I feel like it helps to create this shared memory that fascinates me.

**MA-S:** What kind of stories do you want to tell as you continue working?

**NAC:** In graduate school, I had this understanding that there was something fascinating about how as an immigrant you have to simultaneously exist in two different spaces at once every single day. I even had that feeling when I was in Nigeria because I grew up in a very small town and spent a lot of my summers and weekends in the village with my grandmother. Then I went to high school in Lagos, which is a huge metropolis, so I had that weird dual existence. I’m also thinking of my experience as an immigrant who came to the United States and being an immigrant who came from a formerly colonized state. I wanted to share it, but I was maybe feeling it wasn’t valid . In grad school I used to take a lot of classes on post-colonial theory and contemporary African and Caribbean literature. That really felt like a homecoming because so many of those writers were writing from their experience, and it was so reassuring to see that. I think that gave me the courage to just go for it. There was a nice feeling to know, like, “I’m not alone.”

There’s also a large part of my work that is about my part in the lineage of this special history of painting. That will always be integral to the work, because all my painting training happened in the United States, from French academy style and the Spanish school of painting. So even the way the work is put together ends up being like a hodgepodge of different painting languages and different languages of image-making. The work will keep changing, though, because at some point it’s going to get to a place where I have spent 40 years in the United States and 17 in Nigeria. I wonder how it will change then. As I am changing as a person, the work will morph with me.

_Manisha Aggarwal-Schifellite is a writer and editor living in Toronto._