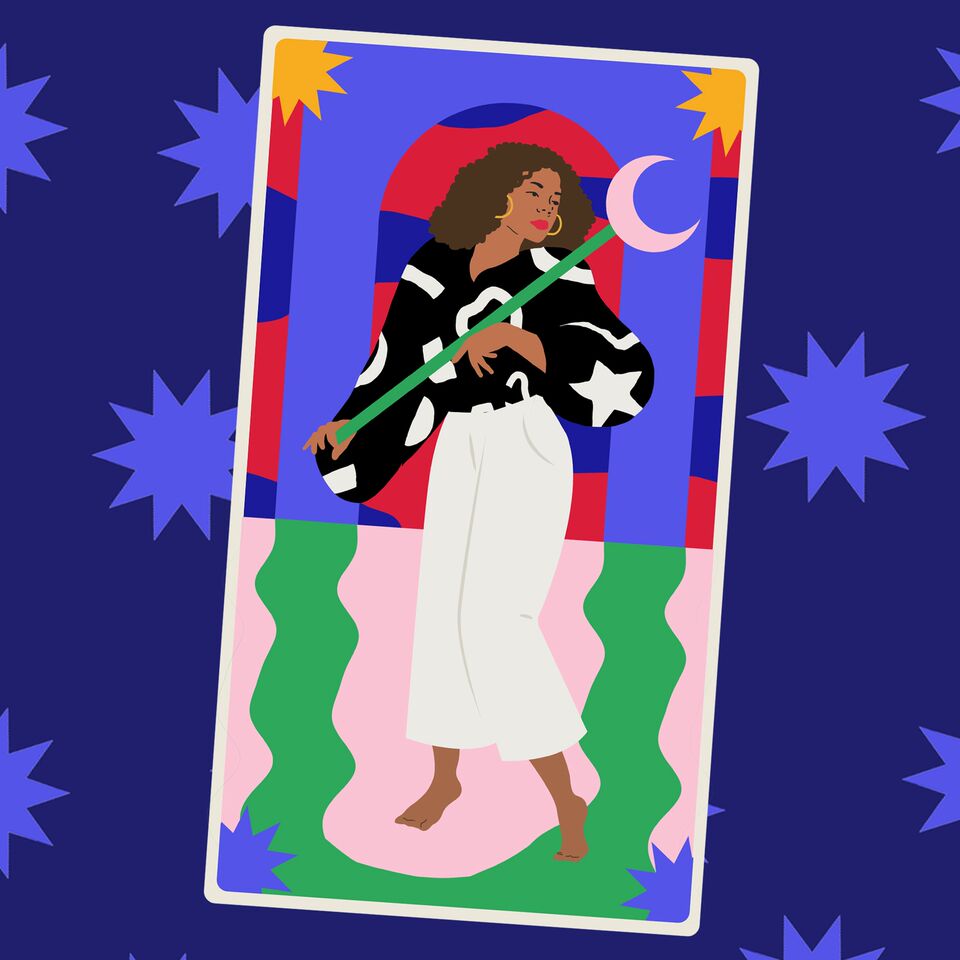 I’m sitting on a couch in Brooklyn as Rachel True — aka Rochelle, the black girl who hexed Marcia Brady in _The Craft_ — reads my tarot over the phone. “The nine of cups comes up for you,” she tells me. “It’s the wishing card. You’re at a stage of your life where you can manifest anything.” Rachel has been a lover of the supernatural since childhood, and she received her first tarot reading as a teenager before acquiring a deck of her own. She tells me that the cards reveal patterns in our lives rather than predicting the future; that they give us a way to connect with our intuition. Card by card, she interprets my spread in a serious but warm tone, following each explanation with questions like “How often do you visualize your future?” and “What is your dream?” These questions were affirmations of things that were already on my mind.

When I was the only black girl in my private suburban religious school, I connected with Rachel’s iconic role as Rochelle because, like me, she was bullied by racist classmates and teased for having “nappy hair.” In an era where onscreen depictions of black adolescence were few and far between, her character’s story validated my own narrative and made me feel less alone.

Rachel, whose connection with divination preceded her career as an actress, currently does readings for clients over the phone and at the (1)in Los Angeles. A week before our reading, she told me about working on _The Craft,_ why diverse representations of blackness are essential, and about her forthcoming role as Marie Laveau, the historic voodoo queen of New Orleans.

**Dianca Potts:** You grew up in New York City. How did that shape your creative interests?

**Rachel True:** My family lived in the East Village until I was in junior high. Then we moved to upstate New York. It was amazing getting the chance to be a New York City kid, especially back in the day. I lived there during one of its most dangerous periods, in the late ’70s and early ’80s, but we still walked to school by ourselves, took the subway, and went to the Met. Being introduced to things like that as a young child definitely sparked my creative side.

**DP:** Were your parents involved in the arts?

**RT:** My father was an antiques dealer, and my stepmother was an actress. Some of my earliest memories are of standing in the back of the theater while she was rehearsing. When she was onstage, it amazed me that she could become another person when she was in character. It was fascinating. It made me realize that I wanted to act.

**RT:** In some ways it was, but one thing I want to throw out there is that my parents split up pretty much as I was being born. After that, they both took off and did different things, so my brother and I were in foster care until I was four years old, when my dad came and got us. People don’t know this about me, but I feel really lucky to have ended up with a primary parent at a certain point. The people that we lived with before that were fantastic. I actually had no idea I was in foster care until about ten years ago, when my half-sister mentioned it. They were amazing people who had a great home. I’m eternally grateful to them for being such good caretakers.

**DP:** What was it like after your family moved upstate?

**RT:** One of the things I missed about New York City is how there’s all different kinds of people literally living on top of each other. You have to get used to each other. It’s a melting pot. I experienced what people who live in homogenous areas will never understand. That’s a gift that my parents gave me. I would say it was not a gift for them to move their black family to an all-white area upstate, but hey, sometimes you get all the gifts and sometimes you don’t.

**DP:** Living in predominantly white spaces can be so hard. I grew up in a mostly white suburb in Pennsylvania, and it was pretty brutal sometimes, which is one of the reasons why your character in _The Craft_ resonated with me so much _._ Did you experience anything like Rochelle did while you lived upstate?

**RT:** It was incredibly racist up there, I feel like that made me who I am today and really strengthened my fortitude. I remember trying out for _The Miracle Worker_ at our local theater group. I wanted to be one of the blind girls. The other girls in the group said, “No, you have to be the housekeeper’s daughter. You can’t be a blind girl, because they’re white.” So I quit, and when I got home I told my stepmother, “I guess I’m going to have to write my own roles because I can’t stand for this.”

**DP:** You sort of created your own role by playing Rochelle, whose character was originally intended for a white actress. How did you get the producers to change their minds?

**RT:** My friend Jordan Ladd had come back from auditioning for it, and she was like, “Rachel, you’ve got to read for it. You’re perfect for it.” I went to my agents at the time and said, “Hey, I’d really like to get in on this film.” They were like, “No, you’re too old.” I had this other manager who was interested in representing me, so I called her up and said, “Listen, if you can get me in on this film, I’ll work with you.” She picked up the phone, made one phone call, and got me in on the project. When I saw the sides for the script, they said, “She’s bulimic and anorexic,” and I thought _Yeah, that’s so not me._ So I just went in and did the best that I could with the material. The audition went well, and I got a few more callbacks. As I worked more with the script, I literally said, “If anyone is going to be a little black witch in this town, it’s me.”

**DP:** That’s so amazing. Were you into reading tarot back then too?

**RT:** The year before I read for _The Craft_ had been slow, so I really delved deep into esoteric studies and learning tarot. When the script came up, I definitely put a lot of mental energy into it, trying to manifest that part for myself. I just knew the role was perfect for me. After all the callbacks, I did a screen test, with hair and makeup, the whole shebang. I’d never done a screen test before, so I was incredibly nervous. I think I had a few crystals in my pocket.

**RT:** Exactly! After I did the screen test, I get home, and there’s a huge basket from the studio on my doorstep with tarot cards and different witch-themed stuff. I was like, _Whoa, that’s a good sign, right?_ I don’t know. Then the power in my apartment went off. It was off all night. I can’t remember if it was just a power outage or if I hadn’t paid the bill or what, but I remember going, _Oh my God, my power is off in the universe. Is this going to affect the film?_ It took about another month after that to be cast officially.

**RT:** It was a blast. Literally as much fun as you’d think. Except there were some negative things, like when we went to do the publicity junket for it and I wasn’t included. To this day, my friends are like, “Let it go.” But it just seemed a little racist back then, to be honest. That you have four girls in a movie and you don’t include the black one. I did end up going on one junket because one of the other actors called the producer and said, “What’s happening here? Will you please include her?” So they did. That was twenty years ago, and things have really changed. Times were different then.

**DP:** Like I mentioned before, as a black girl who attended a predominately white school, I saw the character of Rochelle as an anchor . She made me feel less alone. Did you think that playing that part would become so iconic for viewers like me?

**RT:** When I was auditioning for the movie, I wasn’t actually thinking about, _Oh my God, there’s not really many black people in teen movies._ I wasn’t thinking about the ramifications of all that. I’d say maybe five years after the movie, I started having a lot of young girls and people of color coming up to me and telling me how much it meant to have someone who looked like them in the movie.

**DP:** 2016 marked the 25th anniversary of _The Craft_ . It also coincided with a resurgence of mainstream interest in the archetype of the witch and elements of the occult. You mentioned earlier that you studied tarot. Were you interested in divination or witches when you were younger?

**RT:** I’m a Scorpio, so even when I was a little kid, I was drawn to it. I always wanted to be a fortune-teller for Halloween. I was interested in figuring out what we are, why are we here, and why we think the way that we do. My father is English and Eastern European and his grandmother was a gypsy, so I feel like it’s in my blood too. I had a few tarot readings when I was a teenager but didn’t get my first deck until later. I don’t think that tarot necessarily will tell you your future because you have free will and that can change anything at any time. What I think it’s great at doing, though, is showing you patterns that are happening in your life. For me, tarot is just like a check-in. Right now, I’m working in a partnership at the House of Intuition in LA and do readings there.

**DP:** You’re currently working on a film about Marie Laveau, who was known as the voodoo queen of New Orleans and was recently portrayed on _American Horror Story: Coven_ by Angela Bassett. Can you tell me a bit about the project?

**RT:** First of all, I absolutely loved Angela Bassett on _American Horror Story._ I was glad that she brought the character to the forefront. What I love about this Laveau project is that it’s an independent film that focuses on the true story. It’s not sensationalized like the _AHS_ version. It’s about a free woman of color who straddled the line between Catholicism and African religions, who brought voodoo to New Orleans. I’m very fortunate to be portraying her. To me, it’s a combination of a lot of dreams. It’s just really nice to see different stories that are based in history and expand the idea of what it is to be black in America.

**DP:** My final question is a bit fangirl-y, so bear with me. What does the word _magic_ mean to you?

(2) _is a writer living in Brooklyn who often carries crystals in her pocket._