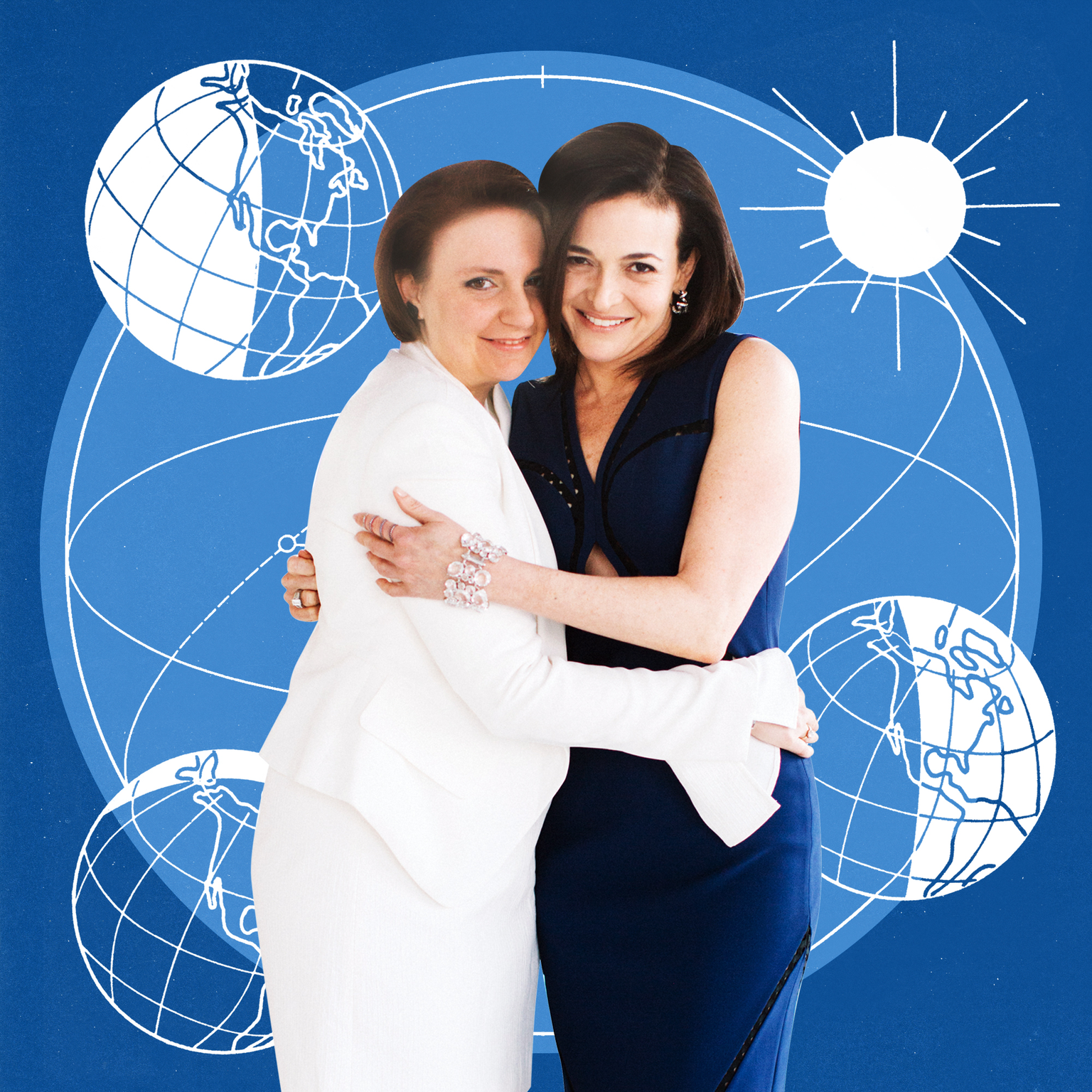 When I met Sheryl Sandberg I was 26. I was new to show business (actually, any business) and new to publicly speaking my mind. I was also the product of a mother who told me that basically everything I said and every piece of art I created was of value.

This, my Lennys, is the perfect recipe for being in constant trouble on the Internet. And that’s exactly where I found myself — at the cross section (1) and the hot rage directed at women with both potbellies and ideas — when Sheryl came into my life. I was frozen with fear of offending people whose opinions I trusted and anger at being harassed by fucksticks. And I wasn’t sure how I could continue to persist as a public voice when the voice in my head was so addled.

At this point Sheryl’s first book, (2), had already rocked (3)) women across the nation as it asked them to step up and take charge of their professional destinies. And, despite Sheryl’s poise and clarity, she also found herself in the hot seat for expressing her belief system. But as all role models do, she didn’t shy away from the challenging conversations. (4), which encourage women to meet in small groups to discuss professional goals and challenges, she expanded the mission detailed in the book, forming a movement with results. She created an essential dialogue about wage equality and the lack of women in positions of leadership.

I expected to admire Sheryl, to be impressed by her fierce intelligence and conviction, her work-life balance, her blowout. But what I didn’t know is that we would connect deeply and fully, spending a long night after our initial talk curled on her couch, discussing the challenges and triumphs of sharing yourself with the world. She lent me insanely comfortable sweatpants and pulled out a pint of frozen yogurt with two spoons, and I felt like I was in a Nancy Meyers–penned movie about two professional, soft-pants-wearing women just workin’ it out.

Since then, we have been workin’ it out. Sheryl recognized that I needed some coaching to actually seize my newfound power, to stop thinking of myself as indebted to everyone who had ever smiled at me and to start thinking of myself as an asset. She asked me if I knew how much my male contemporaries were making, if I had a business manager, and when I was planning to have children. I was shocked to realize there were some questions I had never actually asked myself.

I wasn’t scared to embarrass myself in front of this insanely accomplished woman, to admit my bevy of fears and shortcomings, because Sheryl fosters that sense of openness and camaraderie, whether with people on her Facebook and Lean In foundation teams (*team*! A word I learned to use in a sentence from Sheryl!), or the women she talks to all across the world.

I could write a novella about how much I love watching her put her kids to sleep, completely present and totally in tune. It was only fitting that she forced me to celebrate my 30th birthday in style, insisting milestones must be treated as such, that celebrating yourself is a right, not a privilege.

I feel lucky to talk to her about her latest initiative, Together Women Can, a campaign celebrating the power of women supporting each other and encouraging women to be allies and mentors to each other in the workplace and beyond. She preaches what she knows.

**Lena Dunham:** How would you describe the Together Women Can initiative to our Lenny readers?

**Sheryl Sandberg:** The campaign celebrates the power of women supporting each other. There is a myth that women don’t support other women. It’s just not true. The reality is that women accomplish amazing things when we support each other.

We all know that no one does anything alone. When I talk to you about your life and work, you talk about Jenni. I talk about Mark Zuckerberg, Arianna Huffington, and the other people who have helped me along the way.

Our goal is to help women lean in to their ambitions — and we don’t get there alone. We have heard from our Lean In Circles and from women in the workplace that in order to be more confident and feel stronger, they look to their female peers for support.

This campaign gives women everyday tips for things they can do to help other women. Women get interrupted more than men. And it’s hard when you are the one being interrupted to say, “Stop it!” It’s easier for other women to step in and interrupt the interrupters. Women don’t get credit for their own ideas. Often they have the experience of a man sharing the same idea later at a meeting and being told it’s genius. Help other women get credit by saying, “I loved when Lena said that five minutes ago, and I’m glad you brought it up again.” It’s a great move that helps everyone. The woman who helps looks communal and fosters goodwill, and the woman with the great idea gets credit.

**LD:** Have you encountered the “There isn’t room for both of us” mentality in women? I feel, especially in Hollywood, we’re often told subliminally that there isn’t going to be room for more than a few women at the table. How do you combat that type of thinking?

**SS:** There is some historical truth to this pattern. When women first entered the workforce, there really was only going to be one woman allowed to sit at the table. But that is not the case today.

For the most part, Hollywood and corporate America have made more room for women. But when two men disagree at work, it’s a disagreement. When two women disagree, it’s greatly exaggerated. It’s a catfight.

We expect more kindness from women, and we judge them more harshly. Early in my career there was a senior woman I was excited to work with, and I thought she would be helpful. When she wasn’t, I was devastated. I expected greater kindness because she was a woman. There are plenty of men who haven’t been helpful in my career and I wasn’t devastated as a result.

We have to correct for the biases women face. You shouldn’t feel obligated to support a woman because she is a woman, but because you believe in her ideas and capabilities. It’s the right thing to do, and it creates a work environment that is better for everyone.

**LD:** Do you ever find yourself afraid to be disliked? That’s huge for me — the sense that even as the boss, I want everyone to like me no matter what.

**SS:** You can be the boss and still be terrified, still have the desire to make everyone comfortable. And it’s a strange divide. You’re in charge but still beholden to other people.

I do still struggle with my self-confidence, whereas my male colleagues’ self-confidence never seems shaken by people disagreeing with them. And I do always want to be liked, even when I know it is not possible for everyone to agree with me all of the time and I need to make hard decisions.

**LD:** I thought it was amazing you were launching this campaign as you are in a new phase of your life, without Dave . And you’ve spoken out about the often-harsh realities for single mothers. What does it mean to be a woman without the support of a partner?

**SS:** I’m a very lucky single mother, and I’ve spoken out about this. Many single mothers struggle to make ends meet. Being a single parent is hard and means looking for support in other places. I’m walking and working because of people like you, my friends, holding me up. I have a Lean In Circle of my childhood friends who have helped me get through this difficult point in my life.

I’m excited about this campaign because we need to recognize and acknowledge how much women support each other. Kerry Washington talks about the impact Shonda Rhimes has had on her career. You have spoken out about the supportive creative partnership you have with Jenni. Me and Lori Goler have been together at Facebook for eight years. When you look at successful women, they have other women who have supported them, and they’ve gotten to where they are because of those women.

**LD:** Who taught you that? Who let you know it was OK to reach out to other women and ask for support, rather than hide behind false confidence and a sense of needing to be the perfect professional?

**SS:** My grandmother. She grew up poor and her parents divorced, which was unheard of during that time. She ended up graduating from Berkeley and was the first generation to go to college. She was diagnosed with breast cancer in her 30s and starting raising money for breast-cancer screenings for other women. She literally drove around selling watches out of her car to raise money. When my grandfather’s business was about to go under, she took over the business and saved it. My mom was another strong mentor, role model, and inspiration. Arianna has been a tremendous source of strength and support to me.

Lena, I learned more about finding my own voice from you more than anyone else. People think they can only learn from older people. Everyone older than me told me not to take jobs at Google or Facebook — they didn’t think Google or Facebook were going to be huge — but my peers did!

**LD:** When they said that to you, it must have taken so much confidence to know you could do it. When we started Lenny, people definitely questioned why we would want to step out of our lane, how we felt it could be successful.

**SS:** I remember how excited I was when you started Lenny.

**LD:** And you took the time after Dave passed to check in with me, to help Jenni and me make the best business decisions. I couldn’t believe you were able to support me as you experienced such a massive and painful event.

**SS:** You are a dear friend, and being able to be helpful to you, Lena, made me feel good. And it ended up giving all the amazing women on your staff a platform to tell their stories. When we help each other, it’s a self-reinforcing positive cycle. We support each other and it helps us all. When we support each other, we grow. And once you get to critical mass, it’s much better for all of us.

*Lena Dunham Leaned In so hard she fell over.*