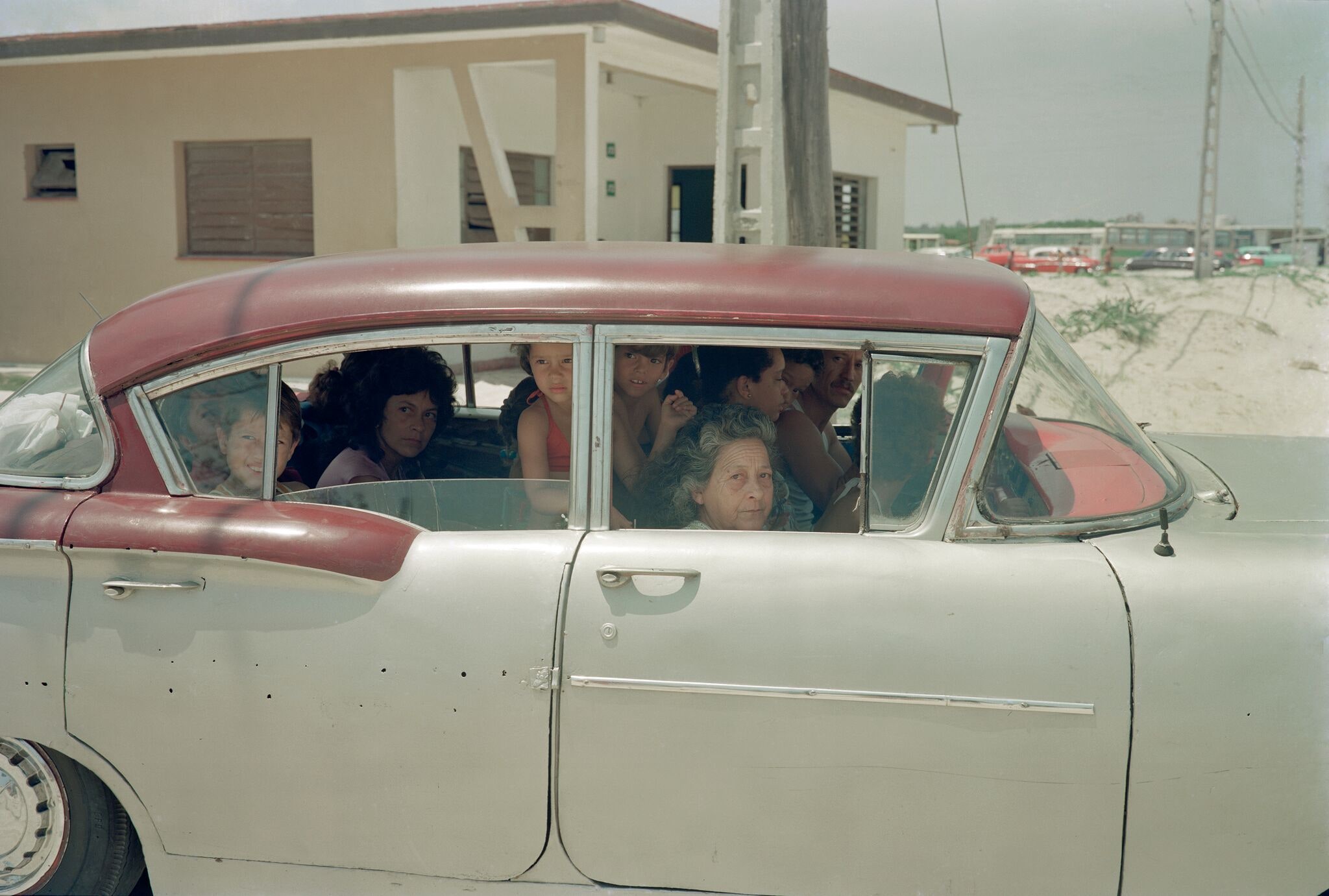 ​Photographer Tria Giovan sometimes wonders where the children in her portraits are today. She photographed them in Cuba in the 1990s. She’s heard a handful of them have made it to Europe — Spain, Germany — though she doesn’t know how. Passports would have been an issue. Money presented its own problems. At the time, Cuba was a place where very little seemed possible.

Giovan, then a young photographer based in New York City, started what would be a thorough and comprehensive documentation of a country in the throes of severe economic depression. In 1989, Cuba began to unravel amid fraying (1). When the USSR dissolved in 1991, Cuba was left without the safety net of trade agreements that bound it to other socialist countries. The  (2) for the island. That time became known as the ” (3).”

But Giovan wasn’t there for the politics. She traveled to Cuba as an objective observer, fascinated by a place that was difficult to get to and relatively undeveloped. What started as one trip facilitated by the Center for Cuban Studies turned into a series of monthlong sojourns taken over the course of six years. In that time, Giovan took around 25,000 photographs, 100 of which made it into the pages of * (6)*, her 1996 book published by Harry N. Abrams. Until recently, many of the other images sat in storage, still in negative form. Giovan has smartly scanned the whole lot, in a digital catalog dubbed “The Cuba Archive.” A book of 200 of these images is set to be published by spring of 2018.

Twenty-six years after Giovan began her documentation, a new Cuba has emerged. Though not without difficulty, the country has since come to support private enterprise and open itself up to foreign investment. In 2014, (7), frozen since the Cold War, began to thaw. Barack Obama recently became the first sitting US president to visit Cuba in 88 years. (4), too, have just made history, playing their first show on the island. In the middle of the set, Mick Jagger, in magenta satin, (5) to a massive crowd, “It was difficult to hear our music in Cuba before, but here we are, playing for you guys now.”

I talked to Giovan about her experience with the old Cuba, from smuggling aspirin to becoming a de facto carrier pigeon between two countries, the resourcefulness of Cuban women, and what might happen now that Cuba has opened itself to the world.

**Tria Giovan:** I was always a bit of an adventurous traveler. I liked the idea of going somewhere where not everyone could go that easily. I think it was also because I had grown up in the Caribbean — in the Virgin Islands. As beautiful and lovely as that is, it also had become very developed, which was difficult to see happen over the course of a young person’s lifetime. One of my impulses was to find a place that hadn’t had that happen and hadn’t been homogenized by development. Certainly, in that respect, I found that in Cuba.

**JB:** With relations opening up between the US and Cuba, do you feel that sort of homogenization is bound to happen there?

**TG:** I think that there’s a very strong cultural identity in Cuba, a strong sense of a need for preservation that will maintain the integrity of the culture and the landscape to a certain degree. There’s been development going on there since Cuba started opening up to foreign investment outside of the US, obviously. A lot has changed, and, with the new policies with the US, Cuba will certainly continue to change, probably at a more accelerated pace.

**JB:** Do you remember the process of physically getting to Cuba? Would you typically travel with a group or by yourself?

**TG:** There were chartered flights in Miami. You’d have to be in line at four or five in the morning, and you never left before the middle of the day, and it was so restricted who could get on those flights.

On my first trip, I met another photographer, a woman named (8), who’d also done some really great work there. The first three or four times, we went back together. We’d travel and drive all over together, sharing the costs, et cetera. There was absolutely no way to get money in Cuba if you ran out. No way to cash a check, no credit cards. There was no banking exchange with the United States. You just had to bring enough cash to cover yourself for a month, which was not always easy to figure out. One time I had to call a friend and ask her to get some money for me and give it to somebody we knew that was coming down.

**JB:** What stood out to you the most in those first trips?

**TG:** My initial interest going down was the diversity of the architecture and the state of it. But I ended up finding that the portraiture and people — the daily life there — was equally as interesting. There was such a really lovely quality to the people.

**JB:** Is there a subject within the series that means the most to you?

**TG:** I find when I look back that I took more pictures of women. The women are really striking and strong. Those are the ones that I find stand out for me.

**JB:** I love the one of the women in the beauty parlor. It so beautifully captures a universally feminine moment.

**TG:** Thank you. I think that one says a lot about time and culture and beauty and people’s conceptions of it — to what length people go …

**JB:** That they’re in the depths of a depression and everyone still needs to get their hair done and look presentable …

**TG:** They were so resourceful, too. They had these plastic flowers, and they would melt those down and use them for nail polish.

**JB:** Were there things you remember being in short supply?

**TG:** Pretty much everything. In the early ’90s, they would shut the power off in Havana for hours at a time to save oil in the middle of summer. It was unbelievably hot. People would save all this food in their freezers and then the power would shut off. It was rough. They were on the brink. And they got through it.

**JB:** Traveling back and forth between the States, were there things that you realize you had taken for granted?

**TG:** Yes, certainly. Every time I would go to Cuba, I would bring down bags of aspirin, deodorant, shampoo — things that were really difficult to get there. There was no medicine. Even though health care was free, there was no medicine. So that was a big part of bringing things down for people that you knew. And letters. You couldn’t even mail a letter. I would take five letters from people in Cuba that would go to Miami, then those people might send me letters to take back down. You were always bringing money back for people too.

**TG:** You had to pay for your hotels from the States. It’s not that it’s illegal to travel to Havana, it’s illegal to spend money in Havana. That’s — quote, unquote — “trading with the enemy.” In going legally, you would have to book all your hotels through Marazul Tours in New Jersey, who, as far as I know, were the only game in town, and pay for it all before you went. But you kind of figured out different ways to switch things around once you were down there.

**JB:** By the end of your travels there in the late ’90s, had Cuba changed in any noticeable way?

**TG:** They were just starting to allow some small private businesses. Before that, you weren’t even allowed to sell your own eggs if you had chickens. In 1999 to 2000, it was just starting so that people could have restaurants in their houses, sell vegetables, sell their own crafts. That was when it was starting to take hold, but then would say, “Yes, it’s OK,” and then pull back and say, “No, too many people are doing this, now you can’t do it anymore.” It was always one step forward and five steps back, which was really disheartening for people to deal with.

**TG:** I don’t. I might, but I feel I spent so much time there and there are a lot of other places to go. I’m a little scared that it would just be sad.

**JB:** Is there a memory from the trip you’re most fond of?

**TG:** There are a lot of great memories. These lovely guys took Janis and me into the mountains camping. Janis had met them at a concert or something. I think they were between the ages of 12 and 17, and they said, “We want to take you to our special camping place in the mountains,” and we said, “OK!” The camping place was basically a concrete slab. To get there, you had to get on a boat and go across this lake. They’d drop you off, and you’d climb into the Escambray Mountains. There were waterfalls and some coffee farmers — that was it. We stayed there for three days. Just a delight.

*This interview has been condensed and edited.* * (9)* *is a freelance writer and editor living in New York City.* ​