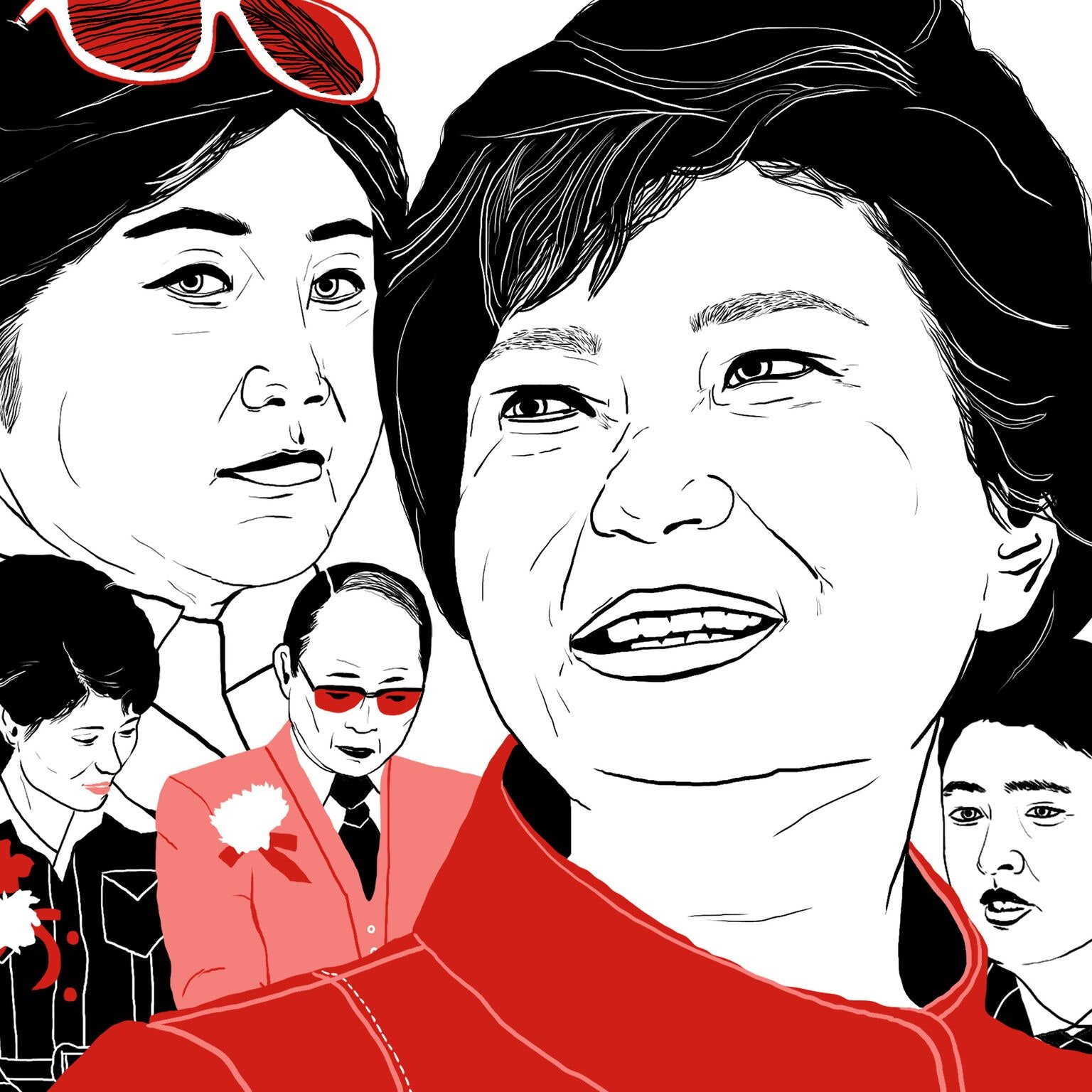 When South Korea elected Park Geun-hye as its first female president in December 2012, I was pretty amazed; until 1990, Korean law did not allow women to be head of the household or have equal inheritance rights. And yet just 22 years later, they had a woman president. I really thought the worst fate awaiting Park was that people were going to make sexist remarks or criticize her hair or clothes. Ha. If only.

Little did anyone know at the time that three years into her term, Park would face impeachment for her involvement in perhaps the most delicious corruption scandal of any developed-world democracy in recent memory. This may be the first time that a president’s misdeeds had no apparent benefit to the president at all. There was no Machiavellian intent on her part, no trysts with interns. Don’t get me wrong — there was hella sex and money involved, including $70 million worth of extortion, a (5), and a (6) — but Park was not the beneficiary of those. The reaper of those rewards was Park’s “friend” and confidante of four decades, a Ms. Choi Soon-shil (Choi being the family name, not the first name).

Park’s fatal flaw was not greed or sex; rather, it was a lifetime of loneliness, early exposure to a cult, and an addiction to a very strange, very bad woman.

Choi Soon-shil had no educational or professional qualifications other than being the daughter of a famous cult leader, yet she had in her slavish thrall the president of one of the world’s largest economies. And that’s what the Korean public can’t forgive. It’s not the corruption and cronyism that bothers Koreans so much — Korea’s seen much, much worse. It’s that Park has made herself into a world laughingstock.

Koreans used to have a very protective view of Park. She was Korea’s Caroline Kennedy, the eldest child of a slain president. In fact, both Park’s parents were assassinated. Her father, Korea’s longest-serving president, Park Chung-hee (who brought the nation from poverty to riches during his rule from 1961 to 1979), was shot dead in 1979; Park’s mother was killed in 1974 in a botched attempt to get at her husband.

You could say that Park’s downfall began after the death of her mother. The following year, in 1975, when she was 23, Park was approached by Choi Tae-min, Choi Soon-shil’s father and the founder and head of the Church of Eternal Life. Choi Tae-min claimed that Park’s deceased mother had been visiting him. Google Choi Tae-min and the first images that pop up are photos of Rasputin, the Russian mystic who was thought to have hypnotized the last czarina, Alexandra.

Choi’s “church” was a strange amalgam of Fundamentalist Christianity and the ancient Korean occult practice of shamanism — basically, witchcraft. A few pig-burnings and séances later, Choi Tae-min was controlling Park in an attempt to get at her father.

In a diplomatic cable unearthed in 2007 by WikiLeaks, the U.S. Embassy in Seoul wrote that Choi “had complete control over Park ‘s body and soul during her formative years and that his children accumulated enormous wealth as a result.”

The full extent of Choi Soon-shil’s mental enslavement over Park first came to light on October 26, 2016, when a Korean news outlet called JTCB got a hold of Choi’s Samsung Galaxy Tab, which had evidence of Choi’s marking up and commenting on one of Park’s important presidential speeches. Very stupidly, Choi (7) tried to claim the tablet belonged not to her but to her aforementioned male prostitute friend Ko Young-tae. There were just two problems with that claim: (1) Choi’s tablet was full of her own selfies; (2) Choi’s drawing attention to Ko led to the latter’s being apprehended by police. And boy, did he have stories to tell them.Choi Tae-min died in 1994, after which his daughter became the center of Park’s universe.

For one thing, the speech found on Choi’s tablet was not a one-off occurrence. In his official statement, Ko referred to Choi, bizarrely, using the honorific title of “hwejang,” which means “CEO.” As in, “The CEO’s favorite thing was correcting speeches. If some problem arose over one of her changes, she’d yell at the responsible party.” This prompted the investigators to dig deeper. And the deeper they searched, the more apparent it became that President Park consulted Choi on many major political decisions and shared classified information with her.

Ko has not admitted to a sexual relationship with Choi — those claims came from Ko’s brothel coworkers, who said Choi was Ko’s regular customer for years — but Ko did receive expensive watches and other pressies from her. At the very least, it’s safe to say that Choi considered Ko a confidante, which is just as weird as President Park’s considering Choi her confidante. It’s a chain of stupidity in which each person gets country-running advice from someone less qualified, all the way down.

If you need proof of Choi’s closeness to Ko, a Korean governmental inquiry panel was convinced that Ko had enough inside information on Choi that they grilled him in December 2016 about Choi’s activities, as a way of digging up dirt about Park. It is unknown whether Park knew the precise nature of Choi’s relationship with her faithful male companion. But what is known is that in 2013, Choi duped the president into accepting a crappy gray handbag from an accessory line Ko started (using money from Choi, some claim) called Villomillo. Park was thus unknowingly giving free publicity to her useless friend’s favorite prostitute’s second-rate bag company.

Choi was privy to a lot of sensitive information. And not just information, but money: it turned out she extorted some $70 million from Korean companies, leveraging her closeness to Park. She even got $3 million out of the vaunted Samsung, which she used to buy a dressage horse and special riding classes for her daughter, (8). Chung, who was arrested in Denmark on January 2 for overstaying her visa, is a piece of work as well. In 2014, she reportedly posted the following statement on her Facebook page: “Blame your own parents if they don’t have the ability. Don’t point fingers at us if your parents don’t have what it takes. Money is also a form of ability.”

The scandal has reached the highest levels not just of politics but of Korean business as well. On January 16, South Korean prosecutors announced that they were seeking to arrest Jay Y. Lee, the heir apparent and de facto head of the entire Samsung empire (his father, chairman Lee Gun-hee, is in poor health). The Korean legal authorities claim that Lee gave a $36 million gift to one of the many “charities” Choi was using to front her bribe collection business.

Some in the anti-Park camp say that there’s a lot more at stake than just stupidity. (1), a Korean-born author and historian at the University of Missouri–St. Louis, told me, “This is actual corruption, incompetence, and anti-democratic, quasi-dictatorial policies that really border on treason. This goes way beyond her stupidity; it’s about her complicity.” He cites one example of such complicity that is ill-covered in the Western press: a list compiled during Park’s administration of blacklisted left-leaning artists, comparable to McCarthy’s list. “This is a throwback to dictatorship.” Though Park has consistently denied the existence of such a list, the Korean minister of culture confirmed on January 9 that the blacklist was very real.

So how does an educated, quintilingual (she speaks Korean, English, French, Chinese, and Spanish) political scion with an electrical-engineering degree (surprise!) end up relying on such a clown as Choi? The only reasonable answer is that the president seems to have felt that she could rely on literally no one else. She became an adult orphan under horrific circumstances. And her reliance on the Choi father-daughter duo created an insoluble rift between Park and her two younger siblings, who tried and failed many times to separate her from the Chois.

As for why Park didn’t do the obvious and turn to the many political allies her father had built over the years, one can only speculate. Certainly even the least competent of them would have given her better advice than Choi Soon-shil did.

If I had to guess, I’d say she has a fundamental mistrust of Korean politicians, rooted in her father’s 1979 murder: he was killed by a member of the Korean government. The assassin was Kim Jae-gyu, who at the time was the head of the Korean Central Intelligence Agency. In fact, it is very much worth mentioning that cult leader Choi Tae-min may have indirectly contributed to the death of Park Chung-hee. During his official testimony, the assassin Kim stated that one of his reasons for killing Park was the latter’s inability to control his own daughter — to separate her from Choi Tae-min’s seditious influence.

Sadly, this all smacks of a very typical cycle of abuse. A stronger mind (Choi Tae-min) takes advantage of a weaker mind (Park Geun-hye after her mother’s death). The abuser separates the victim from loved ones. The loved ones cry foul, leaving the victim to defend the abuser, growing ever closer to the latter and ever farther from her own family and friends. And finally, the cheese stands alone. Except, of course, for the horrible parasite pervading it.

Here’s what comes next for the country: The Korean Constitutional Court gets the final decision as to whether to make the impeachment official; most likely, Park is out and the nation will have snap elections. The odds are in favor of the next president being left-wing candidate Moon Jae-in. This would make Korea one of the few first-world democracies whose government is going in a liberal direction rather than an alt-right one. The ostensible lesson here is that if you really want to drain a swamp, you have to first have an intolerably embarrassing president. Ahem.