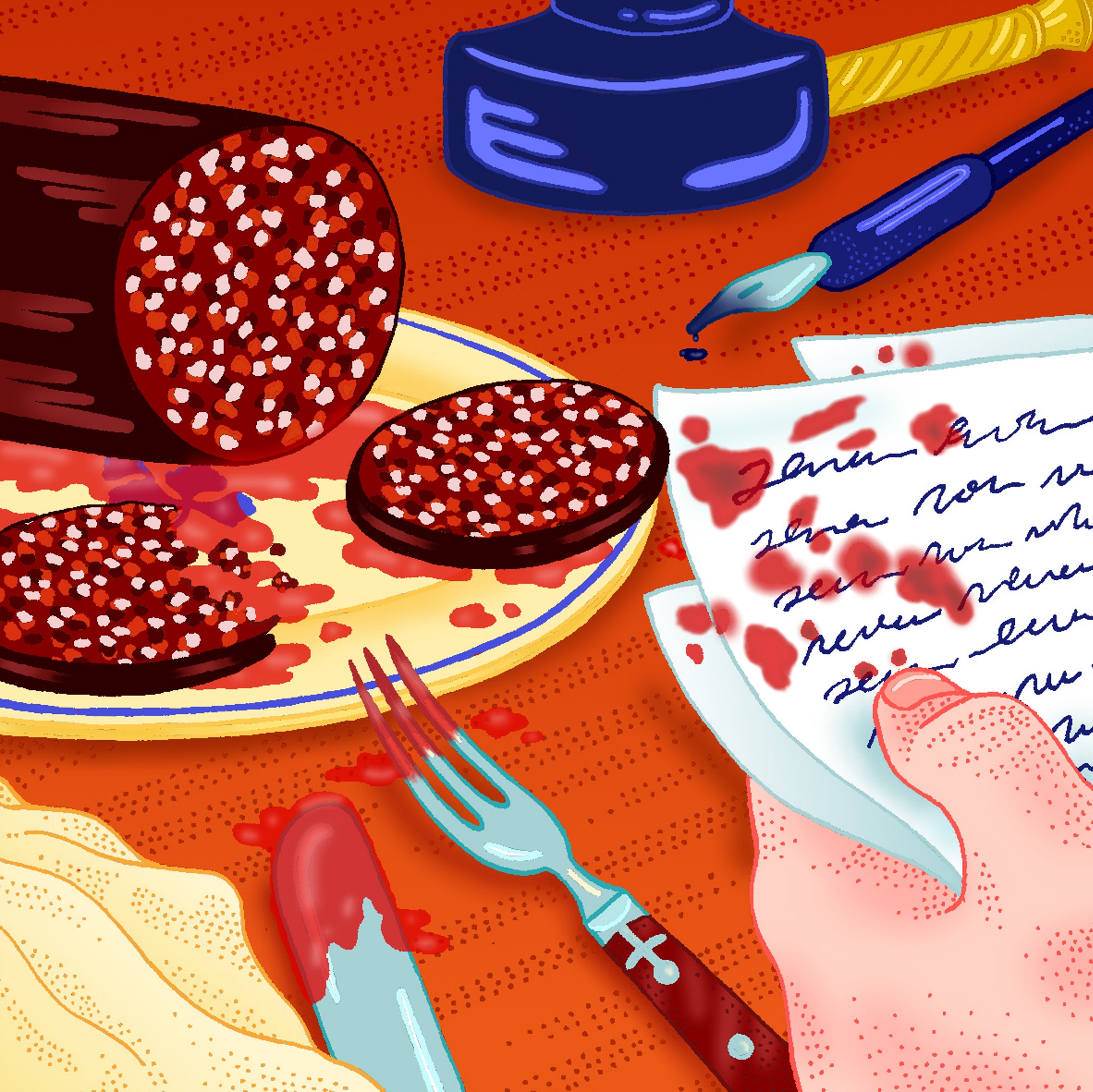 *In this column, Alexis Coe,* Lenny’s *historian at large, conducts Q&As with authors and specialists in archives across the country, focusing on one primary source. For this post, Alexis spoke with Laura Shapiro, author of* What She Ate: Six Remarkable Women & the Food that Tells Their Stories. *Alexis and Laura discuss Dorothy Wordsworth — sister, muse, and companion to the Romantic poet William Wordsworth — in whose diaries Laura found a quiet revelation. (2) and (3). Read Laura’s piece for* Lenny *about America’s first celebrity dieter, Fannie Hurst, (4).)*

**Alexis Coe:** “Food talks — but somebody has to hear it,” you write in the introduction to *What She Ate*, and that’s just what happened to you one sleepless night. Hoping it would lull you to sleep, you revisited a Dorothy Wordsworth biography, but had quite the opposite effect! A seemingly mundane note about black pudding, “that stodgy mess of blood and oatmeal,” completely energized you. Why do you think you were ready, at that moment, to hear it?

**Laura Shapiro:** I’ve been thinking about food my whole life and writing about it practically that long, so there’s pretty much always a corner of my imagination that’s busy wondering about what people are eating and why. It’s like the security system on my computer, performing “background tasks” while I’m working on whatever I’m working on. And then on top of this, the night I was reading the Dorothy biography, I happened to be in that kind of altered state that comes with insomnia. As I sat there with the book, I felt as though all the ecstasy of her life in Dove Cottage was just pouring out of those pages and flooding into me. She was in paradise, plain and simple. And paradise was full of food, lovely and heartrending food — a rhubarb tart baked for William, his bowl of broth, his bitten apple. So when that mention of black pudding came along, it was a real shock. It landed, splat, in front of me like a big nasty blot from a leaky pen.

**AC:** Dorothy Wordsworth, like too many women in history with proximity to “Great Men,” is generally studied because she served as an eyewitness, not as a being worthy of her own study. Dorothy was valuable because she was close to her brother, William, who wrote “The Prelude,” widely considered to be the greatest poem in English romanticism; she often lived with him, serving as a sounding board as much as a housekeeper, and they corresponded when she didn’t. But (mostly) male historians consider the kind of primary sources Dorothy left behind to be about “women’s work,” like cooking, housekeeping, and child care, and they peruse pages for nothing more than a passing reference to her famous brother. The rest is edited out and generally overlooked. And “women’s work” is what you were after when you sought out Dorothy’s “black pudding” journal entry at the Wordsworth library at Grasmere. What did you find?

**LS:** What I found, and this was both frustrating and fascinating, was exactly what had been quoted in the biography — “Dined on black puddings.” What I had been hoping for, of course, was much more. I wanted her to tell me everything she was thinking when she looked down at that plate, and I wanted a detailed description of the black pudding, too. Instead, Dorothy simply dropped that brief mention onto the page, along with a couple of other notes on what she did that day. It was utterly impersonal, not a trace of emotion or introspection or beautiful writing. In other words, it was the opposite of *The Grasmere Journals*, and as soon as I realized that, I knew I had the key to understanding it.

**LS:** We need the context. So here is Dorothy in Dove Cottage, young and ardent and the handmaiden to William and his poetry, filling her journal with loving references to this very simple and immediate food she was putting on the table each day. Then William marries and has a family. Dorothy helps out in the time-honored fashion of the unmarried sister, but 25 years later, she’s redundant. So she volunteers to spend the winter in Whitwick, a poor, ugly village where her nephew has gotten a job as a curate — she’ll keep him company, she’ll re-create Dove Cottage, she’ll be “useful,” as she puts it, which has always been the whole point of her life. Does it work? Is this paradise all over again? The black pudding says, no way. It says, basically, you can’t go home again.

**AC:** I’m sorry to inflict this on our readers, but I’m afraid I’ve got to ask you to describe black pudding.

**LS:** I based my description on the recipe that appeared in *The Art of Cookery Made Plain and Easy*, by Hannah Glasse, first published in 1747 but reprinted and plagiarized a million times after that. You’ve slaughtered your hog, so you collect the warm blood, stir it until it cools so it doesn’t coagulate, add “groats,” or crushed oats, and a few spices, and then stuff the intestines of the hog with the mixture plus a lot of chopped fat. You’ve got sausages, essentially, which you then boil. The important thing is that there is no margin for error — if the blood coagulates, if the intestines aren’t scrubbed perfectly, if they’re overboiled or underboiled, you get something disgusting. And even if they’re perfect, black puddings were famously indigestible. What’s more, they had an unsavory cultural reputation. They were cheap and phallic-looking, which made them stock icons in comic anecdotes about rascals and criminals and “wenches.”

**LS:** The housekeeper in Whitwick came from Grasmere, where she had tried out as a cook for the Wordsworth family. She couldn’t do the dainty and refined cooking they wanted, so they fired her, but they decided she would be perfect for Whitwick. Curates didn’t make much money, and she was known as very “frugal.” In her view, black pudding would have been a good, cheap, appropriate dinner. Back home in Grasmere, by contrast, it would have been inconceivable to serve black pudding for dinner. Possibly for breakfast, as one of several dishes on the sideboard, but only the poor and working classes dined on such a thing. Why didn’t Dorothy fend this off when the cook presented her with the menu that morning, as cooks typically did? I think she wanted Whitwick to be her new paradise, and she refused to believe any evidence to the contrary.

**AC:** When did you know you’d write a book on, or one that included, Wordsworth? How did you end up choosing the rest of the women in the book?

**LS:** I came away from that night of insomnia with a new but very fuzzy image of Dorothy in my mind. I could see Dove Cottage, I could see the daffodils, I knew Wordsworth and Coleridge and all the rest of them were hovering in the background, but when I tried to put Dorothy in the picture, she kept fading away. That plate of black pudding was getting in the way. I didn’t know what to do with her — how could I write about her without being some kind of ordained Wordsworth expert? But I couldn’t shake her, either.

So I did what I often do when I encounter a woman who’s fascinating, usually for reasons to do with food: I scribbled a few notes and put them in a filing cabinet. Years later, as the idea of doing culinary biographies started to take shape in my imagination, I went to the filing cabinet and pulled her out. Barbara Pym, the British novelist whose wonderful and hilarious books are full of food, was in there too. One of the enormous thrills of doing this project was that finally it made perfect sense to think about these women in the context of the food in their lives.

*Alexis Coe is the author of* Alice+Freda Forever *and the forthcoming biography* You Never Forget Your First. (1)