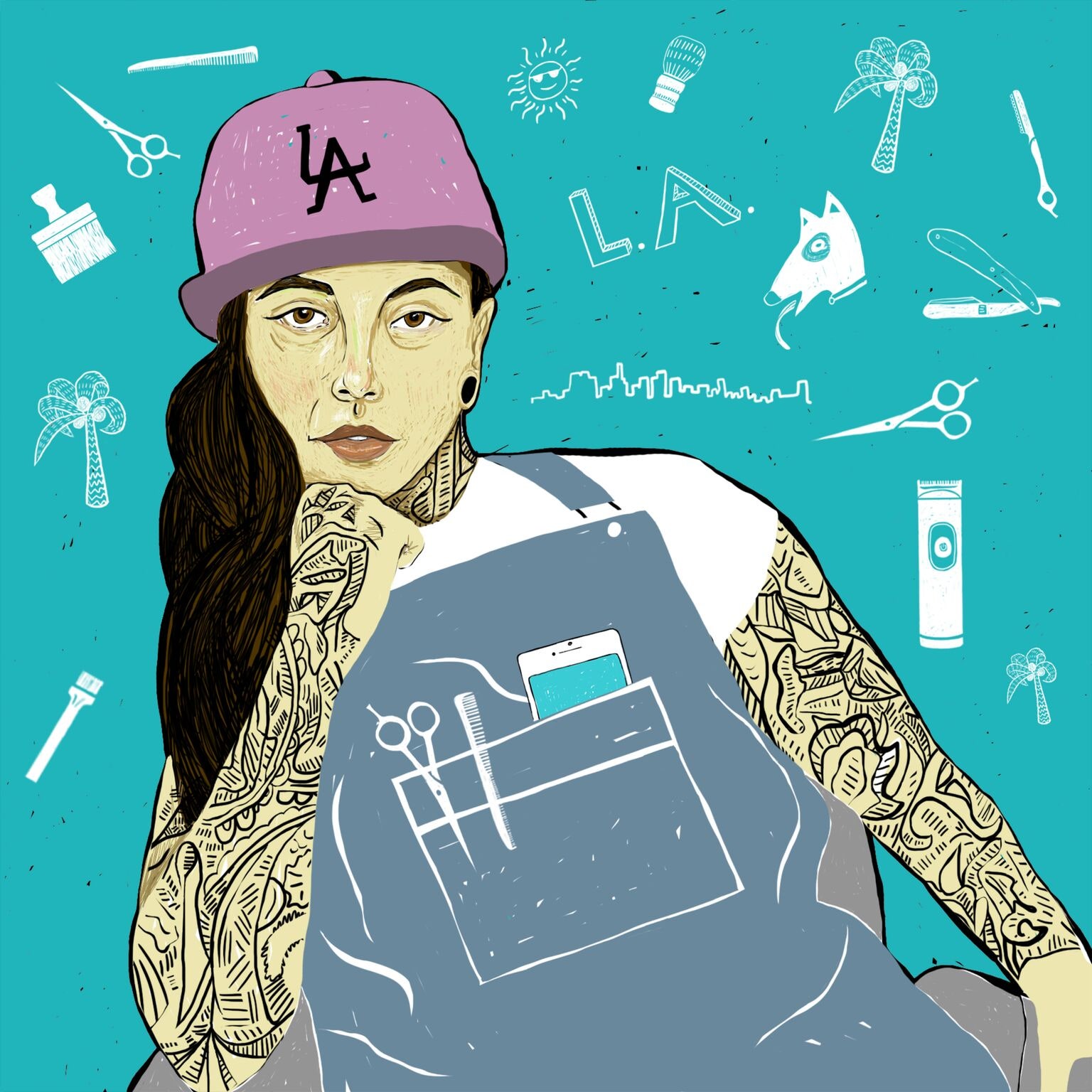 I’m in a Woodland Hills strip mall where Pope the Barber is cutting my hair as part of a sponsored seminar she’s giving to about twenty women who were bussed in from as far away as Sacramento. They’re watching her give me a taper fade with a (1) keratin treatment that everyone agreed was pretty dope.

Pope’s entrepreneurship story could not be more typically all-American. At a young age she learned a trade and became a practitioner who required nothing more than the razors, shears, and pomades she could carry in a tool bag. She spent years working until she finally saved enough money to settle down near her hometown to start her own shop. And her skill is old school, too: I can attest that she is amazing at cutting men’s hair and teaching others how it’s done.

(2) is 57,000 followers strong, and for all the face tattoos and photo shoots, what has made her a true success in this overcrowded influencer economy is her ability to create a truly original lifestyle brand. We discussed how she built her social-media following, how she got into the boys’ club of barbering, and the hardest thing about running her own shop. It used to be that a celebrity hairstylist was someone who cut famous people’s hair. But Pope is the celebrity now.

**Ben Cooley:** Let’s start from the beginning. Where were you born? Who raised you?

**Pope the Barber:** I was born in Long Beach, California, and raised in Compton and Long Beach by my mom. I grew up in the hood, pretty much. I know my dad. He was kind of in and out. My mom and him are really good friends, it’s just that they’re both very strong personalities. Now they really respect each other. My dad is Cambodian, and he is a bodybuilder. Then my mom is a really strong Greek woman.

I’ve grown up against every social norm. I was introduced to and raised with both cultures. They are fresh-off-the-boat kind of people. Since I grew up in predominantly black and Asian communities, I guess people didn’t really know how to take me, so it was a lot of proving myself constantly. In high school, I was known as the person who cut hair. That kind of made me accepted.

**PtB:** I played basketball in high school. We would travel with the boys’ teams. They would be cutting their own hair with clippers in the bathroom. I just thought it looked fun. They’d be in the mirror and I’d be like, “I can help you.” They’d be like, “Nah, nah, nah.” Before I knew what, I was the white girl who knew how to cut hair.

I was definitely self-taught in that way, but I ended up going to school for barbering after and made a career. There’s a social-media culture behind it now, but I’ve always breathed barbering. I’ve always cut men’s hair. When I first started cutting men’s hair, I didn’t know any women that had ever cut men’s hair.

**BC:** Break down your business a little more for me. Do you have a shop?

**PtB:** Because I’m the Pope. Yes! I had a first shop and it got robbed from head to toe. We were getting our electricity done and our cameras put in. During that week that we were shut down, somebody went in and took everything.

**PtB:** I had a lot of business partners then. It was a loss for me, so I decided to go off on my own. This is Vatican number two, and this is my own solo project.

**BC:** Tell me how you promote Pope the Barber.

**PtB:** I come at it guerrilla style. On foot, on the ground. I have to be seen places pretty much. Of course you have to have something backing you up, and for me it’s barbering skill.

**PtB:** A little bit of both. I do a lot of subliminal marketing through my pictures. For example, some of the sponsorships that I have, I promote them just through my lifestyle. That’s what people want. That’s why people endorse me. They just want me to live my life. Get a few pictures.

I know what time to post. I know when people like the most. I know who to blast if I really want to market something I’m coming out with. I’ll definitely go to my other friends with a big following and have all them post it too. I know how to work that system for sure. If I’m posting something relevant, for example, shoes or anything like that, I’ll make sure some big shoe brand, I’ll post right after them so people are going one after another.

**BC:** When you started out, you were the only woman around. What is it like being in the ultimate boys’ club?

**PtB:** Yeah, it is. It’s tough, especially doing these guest-barbering spots. I’m in a different barbershop every week. I see what’s up, and it was hard in the beginning being a woman. It goes back to I have to prove myself. I’m proving myself constantly in this industry.

But there are pros and cons. I say pros: Nowadays people want to be in a woman’s chair. Some guys like a woman’s touch. I’m that mix where I’m not wearing heels behind a barber chair but I’m a girl cutting hair. People like to see that. Some guy was telling me earlier that it’s like a girl who likes football. You’re just attracted to that or something. But, you know, I’m a lesbian, so people know that boundary. It’s nice.

That’s the pros of growing up in this industry. I’m not scared of confrontation with a man. I’ve almost gotten into fistfights in barbershops because of some stupid guy. I can handle my own.

But it’s been tough. I remember getting it more six, seven years ago, men saying, “She’s not going to cut my hair, is she?” I have my coworker over here telling the guy, “No, no, she’s been cutting hair for a long time.” It’s like validating me, and I just don’t need that.

**BC:** What’s been the hardest part so far in running your own shop?

**PtB:** My business partner Aubrey and I went in on this together. She’s an entrepreneur and loves the barbershop vibe and is one of my best friends. It just kinda worked out like that.

I have so many people offering me help. I am slowly learning how to take it and delegate some of my workload. I thought my life was hectic before, trying to get the shop open, but now that it is open, holy crap! It’s a lot to handle and I’ve just kind of accepted that I’m not going to get a lot of alone time right now. I think the hardest part is not having more hours in the day.

**BC:** Do you see growing it at all? I look at Ruby’s or Floyd’s, those kinds of franchises. How do you compete with that?

It’s not all about the money for me. I don’t even want a franchise. I’m glad it’s not franchisable. I wanted it to be a one-of-a-kind thing. If this does well I do plan on growing, but I will be personally picking everything out and doing this myself. I learned with my first Vatican: With all that, it’s better to just do it yourself. Nobody’s going to carry out your vision like yourself. I don’t mind putting in that footwork either. I’ll jump from place to place, I’ll get no sleep. I don’t care, I want it done.

**BC:** When you manage a business that you own (especially one that is so much a part of who you are), do you find that your life becomes your work?

**PtB:** This is my life, man. It’s a lifestyle. The passion is real. It’s all intertwined and I like it that way. It’s always been like that. It’s always been for someone else’s shop and vision, and now it’s mine, so obviously there’s more pride in it, but yeah, I enjoy it. It consumes me in a good way. I’m a very simple person. I like to cut hair, go to the gym, eat good food, hang out with my girl. The barber life is real.