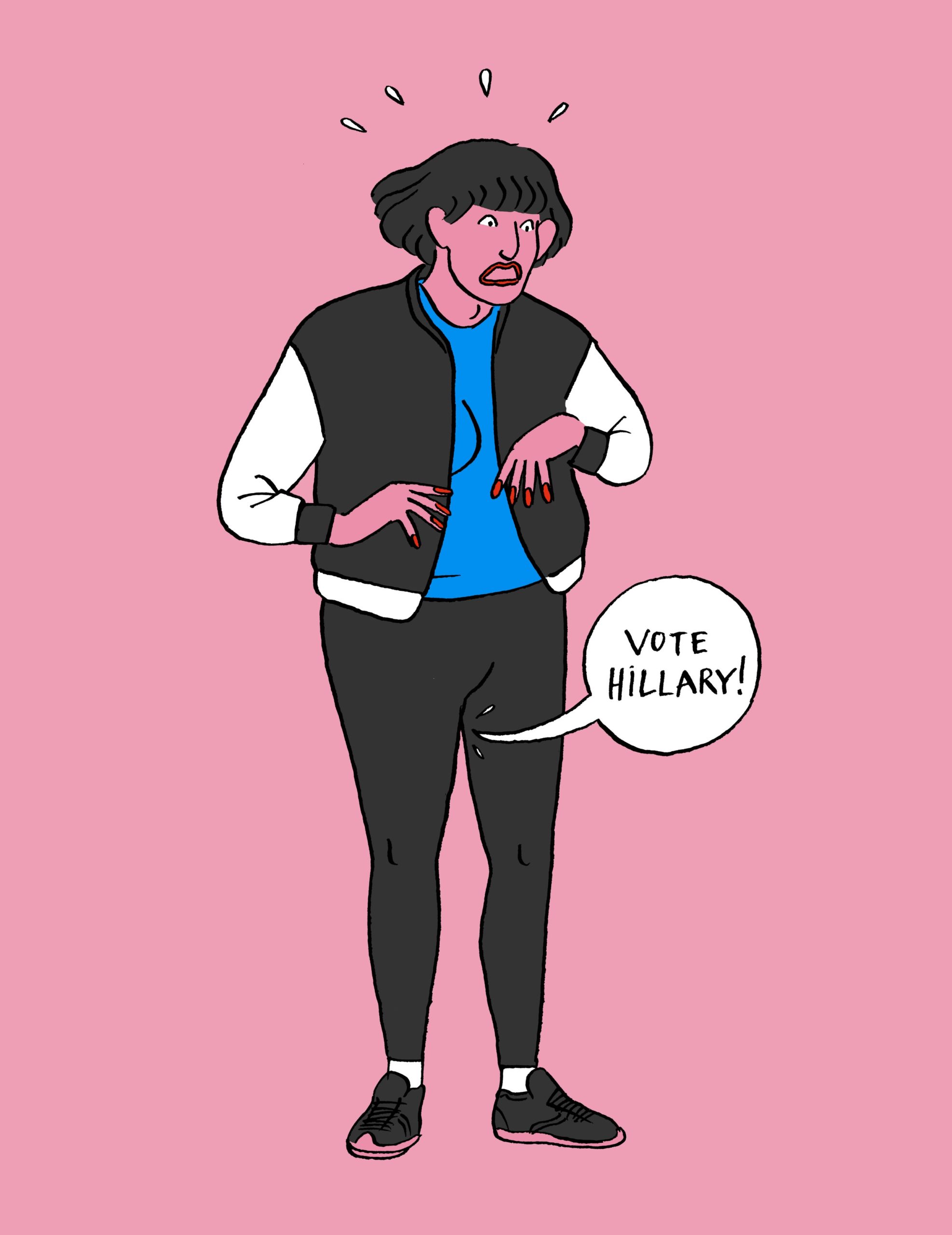 ​I have profound reservations about every candidate running for president in 2016. The Republican slate is a dizzying spectrum of craven and cuckoo. I’m concerned about Hillary Clinton’s pathological secrecy and what that means for government transparency at a time when most politicians of any persuasion have not distinguished themselves in this area, and I don’t love her relationship to Wall Street. I find Bernie Sanders’s lack of foreign-policy experience or specificity unsettling, and I’ve been thoroughly unimpressed with his (4).

Which is all to say: I don’t have a dog in this fight. I’m fairly disgusted by how partisan and base our politics have become. If being an engaged news reader and doing my civic duty weren’t so important to me, I would just bury my head under the duvet and ignore the political horse race until Wednesday, November 9. And yet, I’m still dismayed, no, appalled, at the way I’ve seen women talk about other women who support Hillary.

The brilliant (5) about the young, liberal, male Bernie Sanders bros who denigrate women who love Hillary. Perhaps it’s because of my social-media diet as the editor of Lenny, but I’ve mostly noticed such sexist backlash among female millennials. Here is a sampling of things I’ve seen women — or at least people whose social-media identities depict them as female and feminist — say about Hillary’s fans:

“YOURE A DISGRACE TO WOMEN. BERNIE FOR PRESIDENT 2016 #FEELTHEBERN”

“Are you voting for her because she has a vagina?”

“This makes me vomit because women are just supporting Clinton because she’s a woman. Guess what ladies, she has advocated for women during her time in the Senate less than Bernie Sanders. Hillary is not a feminist.”

“The ‘I’m a woman and it’s OK to vote with your uterus’ message is tired.”

The last time I checked, my uterus was not a sentient being. It has not registered to vote. It doesn’t pay my taxes though it would be great to share that burden, especially since my uterus keeps taking in freeloaders for nine months at a time. But in all seriousness, here’s what the “voting with your genitals” accusation is really telling other women: you’re too hysterical to use your pretty head. You can’t possibly be versed on the issues and have come to a legitimate conclusion from your understanding of those issues. Though lots of women are (6), vanishingly few women actually vote for candidates based exclusively on their parts — otherwise Hillary’s supporters would have switched to Sarah Palin en masse in 2008.

> The last time I checked, my uterus was not a sentient being. It has not registered to vote.

(For what it’s worth, telling women that they’re too hysterical to understand the facts is a criticism that I often see lobbed at conservative women from liberal women, and I hate that just as much. I’ve heard liberal feminists say that women are only Republicans if they’re brainwashed by the patriarchy. While I don’t agree with almost any part of the Republican platform, I respect that different human beings can come to different ends based on the same set of facts.)​

So why is this sexist assumption coming from women who call themselves liberal feminists? My mother, the retired psychiatrist who read too much Freud in her 20s, thinks young women associate Hillary with their mothers and are rebelling against them by lashing out. Former *New York Times* executive editor Jill Abramson, (1) (and quoting Lena), believes Hillary is too pragmatic for young women and that she lacks any appealing revolutionary fervor — this explains why they’re understandably excited by Bernie Sanders, but not why they feel the need to bash other women who like Hillary. My take is that it’s a kind of puffed-up, *Female Chauvinist Pigs*–style posturing. It’s saying, “I’m not like those other uncool, silly women. I vote with my head.” Or, on a more hopeful note, perhaps these women believe that we’re in a post-gender universe, where their body parts don’t define them (though distinguishing yourself from other women through genitalia doesn’t really bolster this view).

This is all just conjecture, anyway. It doesn’t actually matter why women — including, disappointingly, the (2) — are implying that other women are voting with their vaginas. The important thing is that they realize it’s wrong. This kind of gendered bashing is why women don’t run for office in the first place. A study from the nonprofit Political Parity (3) in terms of women in government shows that nearly three-quarters of women officeholders said they experienced gendered discrimination, and part of that discrimination involved “being ridiculed, either privately or sometimes in public.”

Furthermore, telling women that they’re just “voting with their vaginas” doesn’t even help Bernie; it just highlights how important Hillary is as a symbol. The reason these things are still said about her is, in part, because a viable woman running for president is still an anomaly. If we had a presidential race that included not just Hillary but also Elizabeth Warren, Nikki Haley, and Susan Collins, the “voting with your vagina” accusation would be moot.

I want to reiterate that I don’t care if you vote for Hillary. I support and respect your love of Bernie or your fervent hope that Elizabeth Warren throws her hat in the ring at the last minute. I think you should write in Michelle Obama if you feel like it. I want you to keep criticizing Hillary for her stances if you disagree with them. It’s good for the Democratic Party as well as for our country to have candidates with disparate views, because it keeps everyone accountable. But I want you to stop using “vagina” and “Hillary Clinton” in the same sentence, because honestly? It makes you look like an asshole.