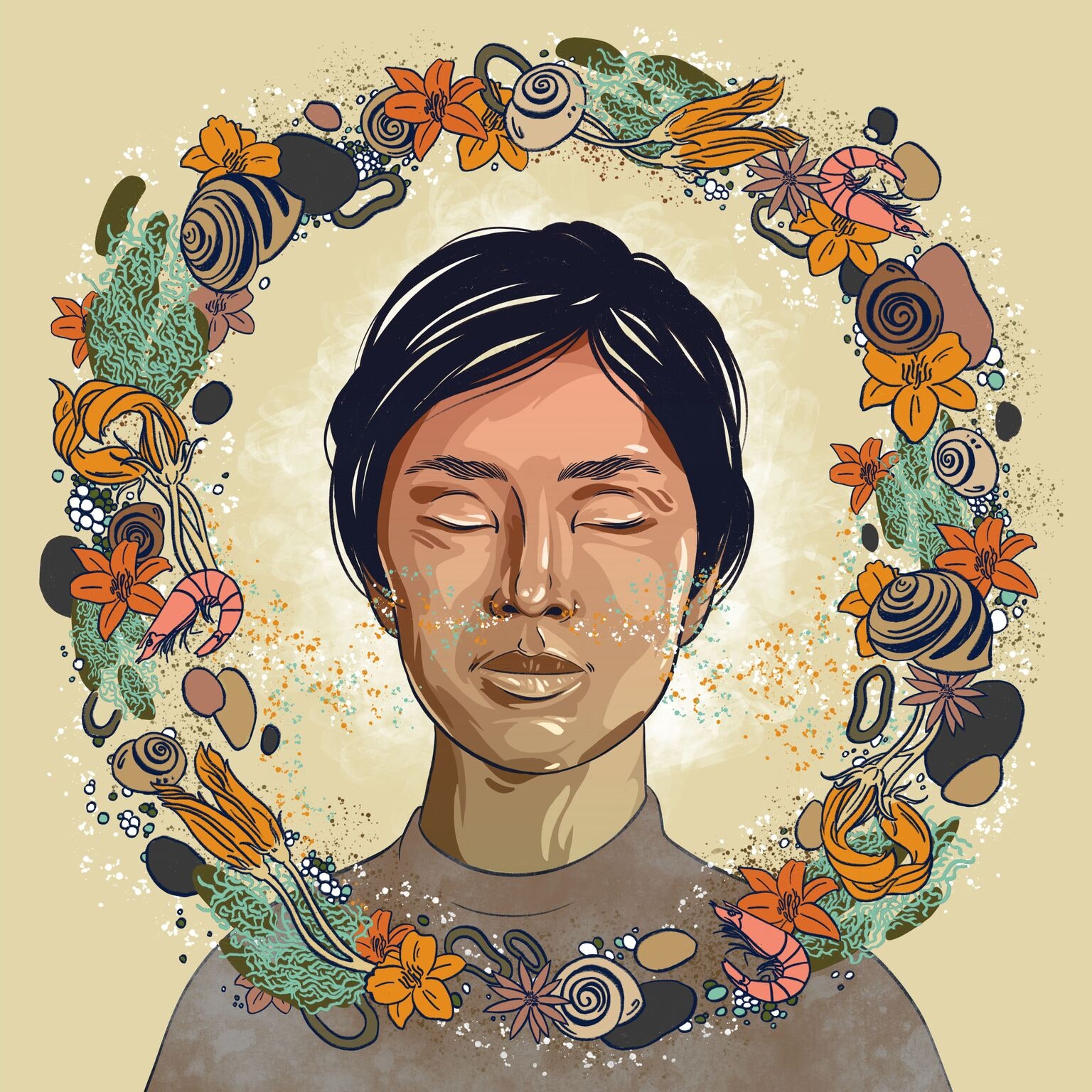 I first learned about Anicka Yi in 2014 when a friend who worked as an assistant at Chinatown’s (2) gallery mentioned her then-current exhibit. It was the show Divorce, about a break-up. Among cardboard boxes and text messages displayed as oversized inflated speech bubbles were live snails that existed on a diet of oxytocin. I’ve been a follower of her work ever since.

Anicka didn’t arrive at art-making until her mid-30s, and her log of nontraditional materials — dried shrimp, temper-fried flowers, snails, kombucha leather, antidepressants — reflects that. Ten years into her practice (and without an art-school pedigree), the artist has found her voice through an unexpected, scientific approach. Anicka explores themes of identity (gender, ethnicity, and even genus) most notably through biological samples and scents.

Now Anicka has a new show up at New York’s Guggenheim Museum, the result of her winning the 2016 (3) this past October. Called (4)_,_ the show is just as alive and conceptual as you’d expect. Two window-display-style installations are set up across the gallery: One is a vibrant presentation of bacteria growth (the diorama is a self-contained refrigerator allowing the bright purple and yellow bacteria to evolve through the show’s run), and the other is a mirrored-Plexiglas maze filled with live ants. There are three canisters that, as you enter and exit the space, wash you with a stale, but not unpleasant scent derived from Asian-American women and carpenter ants.

Her new show deals with the issue of intolerance, and what it would mean if we could understand the experiences of other humans, other species. Our meeting happened on the same day that the president (whom Anicka referred to as the “mango Mussolini”) was visiting town for the first time since his inauguration. Although we hardly acknowledged his presence beyond the traffic that led to Anicka’s lateness, the event was a fitting frame for our conversation.

**Molly Elizalde:** You create a backstory before you begin new work. What was the original premise of this show?

**Anicka Yi:** I wanted to create a drug that would allow for humans or whoever took the drug to experience the perception of another living being, whether that is the perception of another human or a dolphin or a plant or a monkey. I was interested in the idea of tolerance and empathy. It is actually a riff on this contemporary moment of virtual reality. I wanted to extend it even further, to experience a coral reef’s pain, for example.

**ME:** Can you tell me about your relationship to scent?

**AY:** People always come up to me and say, “I think it’s cool that you’re interested in smells, but I can’t smell anything. I’m not even aware.” I think that that’s very symptomatic of where we’re at as a society here in the West, and the kind of repression that we have around smells. You can actually go through maybe an entire day, if not an entire week, if not an entire lifetime, without having any acknowledgment of the smells around you that you’re taking in and that you’re transmitting. When people tell me that, I always think, _You don’t just stop smelling._ Obviously, certain people have compromised nasal passages, but for most of us, it’s a psychological shutting down.

I think that smell can be objective, and it is objective. It’s just really hard to talk about because we don’t have a language for it.There are some indigenous cultures in Southeast Asia that have maybe 300 words that are just designated to talk about smells. We really have no vocabulary to talk about scent. When we say, “Oh, that sure smells citrusy,” that’s a metaphorical placeholder. If we had an objective vocabulary around smells, then we could really start to talk about them in a way that is not so binary, that’s not so reductive, good and bad.

**ME:** I read that your mother and sisters had an obsession with fragrance while you were growing up. Can you tell me about that?

**AY:** I grew up in a family primarily with females. I have three sisters, and we all engaged in and bonded over very similar interests in fragrance and fashion and food. There was always lots of experimentation with personal accoutrements in terms of scent, whether it was in the form of a hand soap or body lotion or shampoo or perfume. You didn’t want to smell like your sisters, and you didn’t want to smell like your mother. In a crowded home where my sisters and I were all two years apart, we wanted to stake out some kind of distinction, and what better way to do that than through smell?

**ME:** In your exhibition (1) and your Guggenheim show, you’ve taken biological samples to create scents from women you’ve come in contact with and Asian American women, respectively. Can you tell me more about how you explore identity through scent?

**AY:** I like to activate our senses, whether it’s through taste and touch or smell, in order to think about ethnic, gender, or national identities. I was thinking about our current political climate and the insurgent wave of intolerance that has taken over the discourse in this country. It is deeply troubling and threatening and dangerous. I wanted to think about tolerance and address it through our lesser-known senses — something like smell and how it seems to function in this very murky area.

Through pure scientific realms, we have no conclusive evidence that you can say this human ethnic group smells like this. There’s no raw data that would substantiate or support that because an individual smell is comprised of three primary things: your unique genetic makeup, your gut bacteria and individual diet, and the soap, shampoo, perfume, and deodorant you use.

I make the distinction that it’s an Asian American female because I think that complicates things a lot more than to say someone who is from mainland China or someone who is from Japan. I think America is a really interesting model because it raises a lot of questions around economic class and lifestyle, much more than being purely ethnic and cultural.

**ME:** In your 2014 show Divorce, you used snails, which are hermaphrodites, and in this show you’re using ants, which live in matriarchies. Can you tell me more about your use of living organisms?

**AY:** I’m interested in information — intelligence sharing — that snails can teach me, that I can teach the snails and the ants. I think it has a lot to do with this kind of anxiety around extinction. When I went to the Amazon, the biggest lesson for me that was so obvious was that the species that adapt the best are the ones that survive. Our species, as good as we are at adapting in certain ways, we completely annihilate ourselves in other ways.