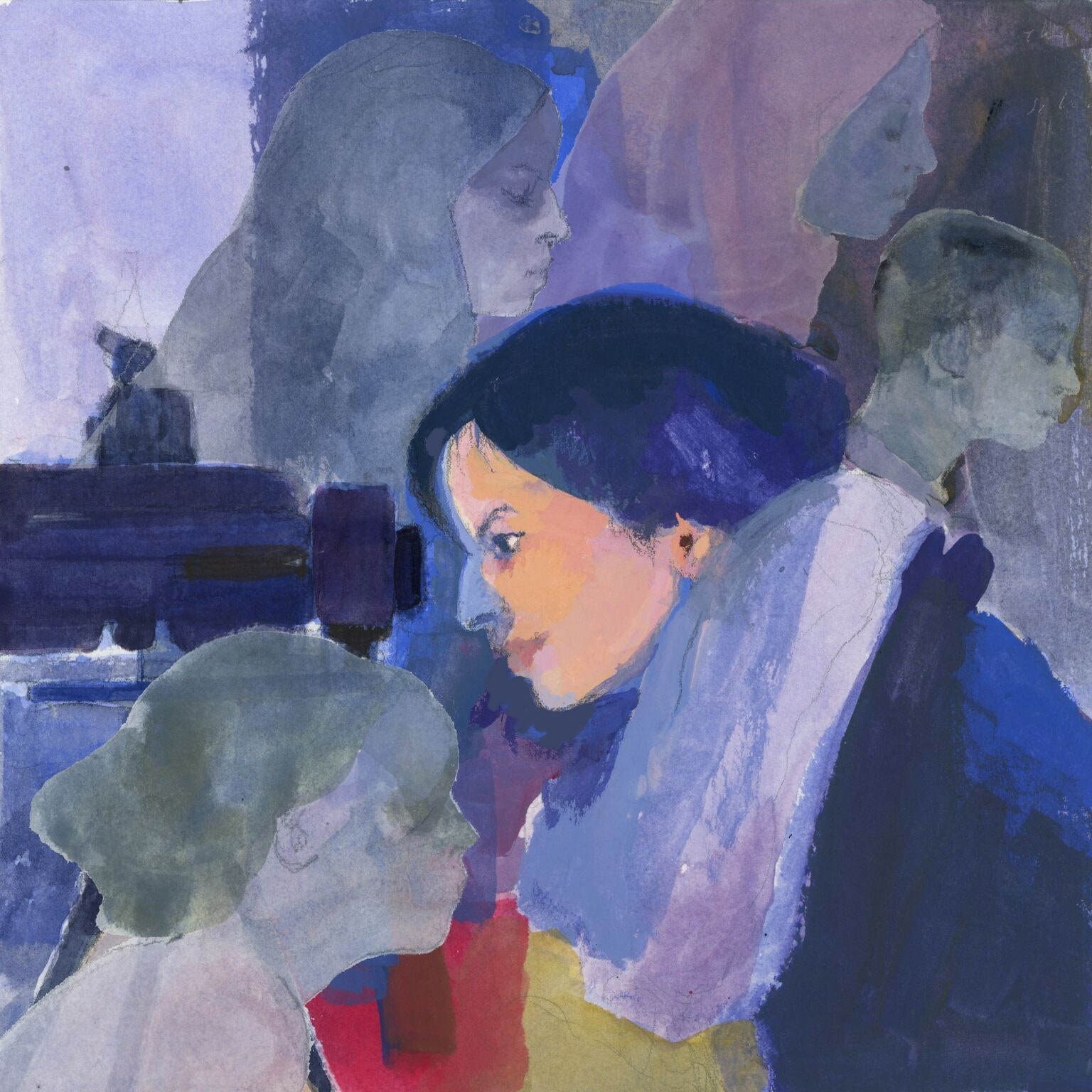 At a film screening in Amman, Jordan, the crowd’s chatter dies down as the theater lights dim. A silhouetted woman appears on-screen and begins to speak. It doesn’t matter that you can’t see her face and don’t know her name. Her account — a story of brutality, prison, and a life of perpetual fear — is powerful, urgent, and deeply disturbing.

Her story and those of the film’s two other unnamed women are the driving forces behind Jordanian-Spanish filmmaker (1)’s documentary (2)._ The film looks at how women in Jordan are put into (3) in order to “protect” them from becoming victims of ” (4)” (loosely defined as murders of women perpetrated by family members who believe they have “defiled” the family’s “honor” in some way, often over a mere accusation of a romantic relationship).

These women are detained under the Crime Prevention Law, which authorizes governors to arrest individuals under suspicion of a crime. But instead of prosecuting the criminals, the law is used to detain the potential victims. These women can spend extended periods of time — sometimes years — in custody for a crime they did not commit.

At the film screening in Amman, a man in the audience declared that some women deserved to be victims of honor crimes. Shafakoj, barely raising her voice, responded that perhaps the law should be used against men like him. The room burst into spontaneous applause.

In her films, Shafakoj takes the issues that are staring us in the face — the people on the streets, unquestioned norms, and the marginalized on the sidelines of a crisis — and puts them front and center. Her work has been transformational and controversial. Shafakoj’s first documentary, (5), was a team project for a filmmaking course. It tells the story of abuse in an orphanage in Jordan, of how orphans are assigned an ID number — “000” — that marks them as orphans. They are assumed to be illegitimate children and inevitably face harassment and discrimination both (6)

As a result of the film, Shafakoj says, the orphans featured in _ID:000_ were issued different ID numbers, effecting change in the negative stigma against them. “I saw the power of making a documentary,” Shafakoj says, “and I was like, _I know what I’m going to be doing for my whole life._”

I met Shafakoj in Amman, where she’s currently finishing her next film, on female Jordanian footballers. We talked about honor crimes, the deep-rooted need to fundamentally change how people see women’s lives, and why people often ask her, “Why do you always have to show negative things?”

**Saba Imtiaz:** What I find really interesting is that your work is about very public things that other people just don’t notice. Is this a conscious effort?

**Widad Shafakoj:** Not really. I think when I made _ID:000_ and saw its impact — that these orphans were then able to go to the interior ministry to actually apply for proper ID numbers and got them — it was incredible to know that I helped create change for people who needed it. I felt so powerful to be able to do that. And I’m just a filmmaker, not a politician or a social worker. was just something I was passionate about.

**SI:** So many of these films are made and nothing happens in terms of legislation or policy change. Do you see your work as a form of activism, a call for reform?

**WS:** You know, last year I was asked to run for Parliament in Jordan, which was really hilarious. I thought about it a lot and said no, not now, not this year. Maybe in four years I’ll be more prepared. I don’t ever want to go to Parliament and get asked a question I don’t have an answer for.

**SI:** _ID:000_ is fascinating. These are things we don’t think about when we’re secure in our identity.

**WS:** I’m part of the society in Jordan that lives in a bubble, and I was truly shocked to learn these stories. I’d met the orphans through a friend who was working with them in a personal capacity. They had wanted to talk to someone for so long, and nobody would hear them. But making this film was very difficult. The kids were put in prison for a couple of days for investigation. We had to send the footage to Syria with a team member (this was before the crisis) because we were scared it would get taken away.

**WS:** We all knew about orphans and that they were probably being abused, but we had no idea about the ID numbers. Everyone reacted so wonderfully ; the kids were there, and people offered them a lot of help.

I then met a journalist who had seen _ID:000_ and told me about women who are abused and put in prison . That shocked me. It was the same shock I’d felt with the orphans. There was no way I was going to sit back. I thought, *I must do something about this as well*. But that was hell for me. It was so difficult to get in touch with any of the women.

**WS:** A whole year of production and around four years of research, which was very necessary because there are so many laws and stories involved.

**SI:** Honor killings are such a deeply entrenched issue. Do you think it can change?

**WS:** I know what needs to be changed — that crime-prevention law needs to go. They can’t detain all of a woman’s brothers and cousins, so this is what they do. At least put the women in a proper place. She is a prisoner in there. Her clothes might be a different color , but she spends her waking and sleeping moments with them. This topic frustrates me so much. It makes me crazy — I cannot believe we even have to face this issue.

**WS:** At the screening, I was asked by a TV station what the alternative is. I said it’s to put the men in prison, because that just makes fucking sense.

**SI:** You had to hide the women’s identities, but you reenacted some of their stories with actors. Those scenes carried on from the testimony really well, like the scene where the woman is walking with her kids, retelling the story of how she left her home and no one will take her in or help her. You show the actors against a bleak landscape … I thought it was the same real-life woman being interviewed.

**WS:** It gave me chills to think about how this really happened when I was filming that. It felt so, so strange that this happened to someone. Even the actress went home one day and couldn’t sleep and kept crying, because she was really living these stories. I’d tell her the exact story about what happened before she acted it out. She was really messed up by the end. She felt their pain a lot … which was great. Because we need to feel their pain, otherwise we will never understand.

**SI:** The women are living in a state of insecurity. Do they feel speaking about this can make a change?

**WS:** They wanted to share what happened to prevent this from happening to other women. Their pain and suffering, it can damage your soul and kill your spirit. One of the girls was supposed to be in prison for just three days; the governor was supposed to get her out, but he forgot about her for eight years. She still can’t believe this happened and how hard she tried to get out. She would talk to any social worker who visited the prison.

A lot of women didn’t want to leave the prison, though. There are three ways to get out: your family comes to take you and they sign a document that they won’t hurt you; you get married to someone and he signs you out; or you get sent to another country. I met this girl who was raped so many times by her brother. She was pretty and threw acid on herself so she could look less attractive to him and he wouldn’t rape her. Her case was very difficult, and Sweden wanted to take her. The social worker would tell her, “You’re such an idiot. You can leave and start a new life in another country. Why do you still want to be here?” And she said, “I just want to smell the soil of my country every morning.”

A girl whose brother came to take her and signed shot her nine times after her release. Someone else I met married a stranger. you’re completely frightened all the time. One girl would change jobs every five days. She was always scared; she’d think knew where she was and would come after her and kill her. One of the girls lives in the desert, in the middle of absolutely nowhere. There are no streets, and it’s this tiny little house. That’s where she lives, surrounded by absolutely no one. She said this is the only place she could live in because no one will ever find her. It’s very messed up. These women will most probably die with a lot of pain. They are living with injustice. No one deserves to live like that.

*Saba Imtiaz is a freelance journalist and author currently based in the Middle East. She writes about culture, urban life, religion, and food. Visit her website, (7), and find her on Twitter (8).*