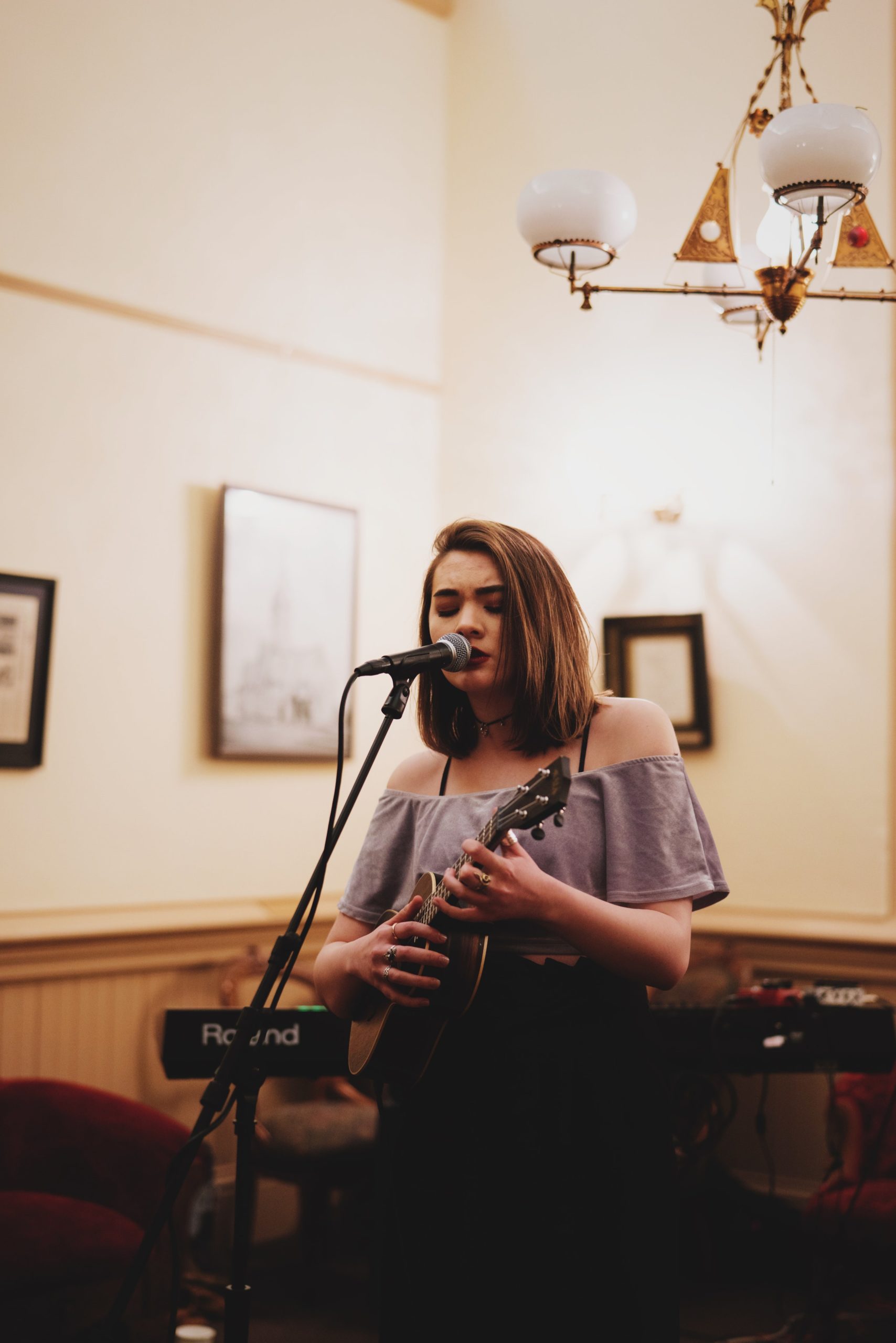 We’re in the middle of a grand reckoning for powerful, harassing men, with women from Taylor Swift to Jenny Lumet calling out predatory behavior in the music industry. And the revolution is sorely needed: last year, Rick Ross publicly announced that he wouldn’t sign a female artist unless they slept together, Taylor Swift had to testify against a DJ who groped her, and Lady Gaga explained in her documentary *Gaga: Five Foot Two* that male producers she worked with talk down to her and insinuate that her career would be nowhere without them.

Last year also saw singer and songwriter (1) with her album *Rainbow* after a three-year legal battle against Dr. Luke, her former producer who allegedly drugged her and raped her while she was unconscious. Because of Kesha’s onerous contract, it was all but impossible for her to make music for several years because of these allegations.

A Portland-based nonprofit run by women who have worked in different parts of the music business wants to give singers and songwriters knowledge about the industry and tools to promote themselves so that they won’t be prevented from progressing in their careers the way Kesha was.

Ashley Kervabon, a singer, songwriter, and social-media coordinator for upcoming artists, started #WomenCrush, an all-female showcase, after she moved from her hometown, New York City, to Portland in July 2015. A few months after moving to Oregon, she injured her leg and wasn’t able to get around. She felt disillusioned by that, since she had originally moved to work on music and meet other artists. And so, after she healed, the showcase that would lead to #WomenCrush was born.

It helped Kervabon meet new people, and so many women began asking if there would be more shows for female artists. “It was more than just a show; it felt like a community,” she says. More and more artists reached out over the next year, and Kervabon started thinking about ways to use the events as both performances and a way to train artists on how to network and manage their social-media presences. She also began purposely working with venues run or managed by women.

Kervabon officially launched the organization in the fall of 2016. She made a website and a Facebook page and began holding monthly events for women to hear each other perform, meet each other in hopes of collaborating, and learn from each other’s experiences in the music industry. In addition, #WomenCrush will also be hosting networking events and educational workshops this year on marketing and social media. And since the group’s tax-exempt status has been approved, Kervabon is able to pay artists for their sets as the organization has grown.

Being a part of the #WomenCrush online community and mailing list has also helped new artists have access to affordable graphic designers and photographers for photo shoots.

“Artists have called me their coach. It’s because everything is so related … how to present yourself on social media is connected to getting good press,” says Kervabon.

She also emphasizes that anytime she uses #WomenCrush connections to suggest a service, the people behind them have to be people with good reputations so that she can be sure the women she works with will be safe.

Kervabon says an incident happened with a producer in New York that made her pass over gigs that could have helped her music career because she was afraid of being objectified or put in danger by a male producer. (2) against mega-producer Russell Simmons to understand the kind of awful situations female artists can be put into.) She’s seen male artists who were her contemporaries go on to greater acclaim than she has. It’s made her wonder where she would be if she hadn’t been hurt by past experiences.

“I know not all guys are bad; the men behind #WomenCrush have been wonderful,” she says. “But I’ve literally avoided men because of what happened, and it’s made me miss opportunities, and I think it happens to a lot of other women.”

And though she hasn’t been able to give details about what happened or name the producer, she’s using her experience to motivate future plans for the organization. Kevabon also makes sure that women working with #WomenCrush feel supported enough to call out any abuse or harassment they face.

Like in a lot of other career tracks, women aren’t always given the best representation, support, or sponsorship. This is often evident in entertainment-industry roundups when it comes to popularity and income. A recent (3) on Mashable highlighted how all of Spotify’s most-streamed artists are men. The same is true for the rest of the industry. All kinds of articles call out the lack of women on the radio, involved in music festivals, or in production.

Kervabon strongly believes that there would be more women in the top-earnings list or top-streaming lists if there were more visibility for female artists. She hopes that #WomenCrush can help bring about change when it comes to supporting up-and-coming women.

#WomenCrush has already expanded to more than thirteen cities, including New York, Chicago, Nashville and starting in Mexico this fall. One of the latest major cities #WomenCrush has expanded to made the network international. Laura Smith*, a Vancouver artist and #WomenCrush co-host, started her own local women’s network, called Come On Vogue, after hearing Madonna’s speech at the 2016 Billboard Women in Music event about being sexually abused.

By the end of August last year, there was a showcase in Vancouver that Smith said attracted people from different communities. Smith saw people who liked different genres and who lived in different parts of the city come and mingle thanks to music.

Now that Kervabon has expanded her network outside the country, she wants to spread into Latin America and eventually Europe. As of now, there are twenty people on the main #WomenCrush team. This includes interns, chapter leaders, and people working directly with her in Portland.

Kervabon is still surprised that her organization has grown so quickly. She recalls how she used to plan events and organize ways to uplift women online as a college student. She can’t believe that it’s now a big part of her life. “All of the things I’ve been thinking about have come together, and it makes sense. That’s why I have #WomenCrush,” says Kervabon. “I feel like I’m doing something good with my life. I feel like I can make a difference.”

*Angely Mercado is an NYC-based freelance audio editor, producer, writer, and troglodyte whose work has appeared in* Edible Manhattan*, NPR, and the Lily.*

**Laura Smith and the Vancouver team are no longer with WCM due to a recent fall out.*