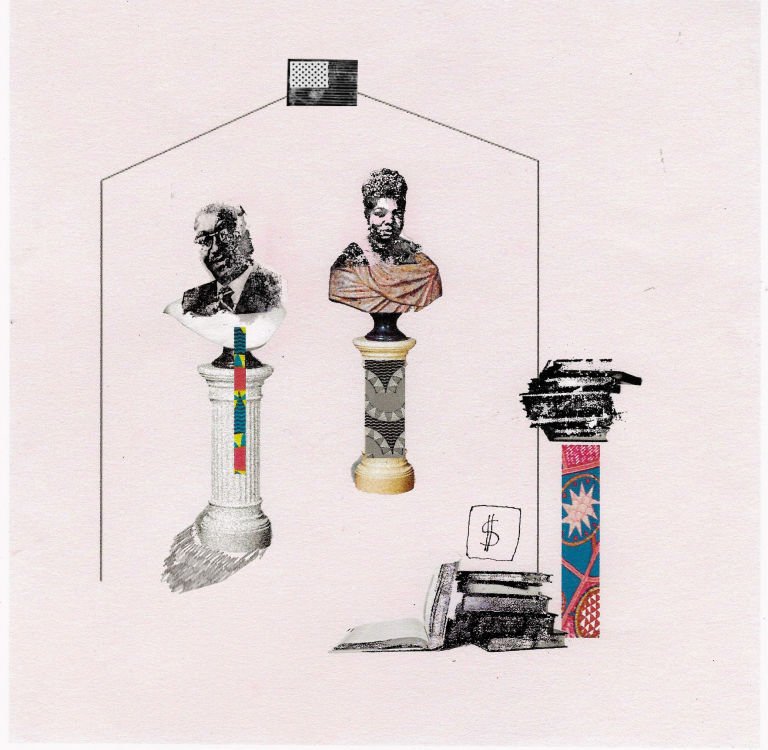 I take this to mean no one gives a flying fuck about me. I should

so long or allowed myself to make this all about me, but seriously

and tag all the books in that great man’s library for sale, his furniture,

his paintings, even his light switch plates—ornate works of art themselves

according to the website this white lady created so she could

or any moment after I am gone. Every time I fool myself

into believing that who we are (I’m saying black people) might be valued, America

finds a way to prove me wrong. Though, that’s not entirely fair.

Franklin, and someone is going to profit off the trappings of his life.

When Maya Angelou died, her house was opened also. Anyone

from her library which, I learned from someone who went

to the sale, had in it my own first two collections of poetry. I want

this Saturday at John Hope Franklin’s house (when my own

grandfather led a church in Virginia, the white woman whose estate

a clause that refused the admission of any black man, woman

or child, and so my grandfather’s parishioners saved their money

and established a fund to assure he could purchase the books

he needed in order to write the sermons they needed to hear,

which meant he died with a substantial library, though when the time came

to make a viable bid for much of anything my aunt and uncle sold), but

if I think my anger matters that would be my first mistake. I want

some institution, or Oprah, or that one rich black man I once read about

of scholarship dedicated to the study of black lives. Though I am nothing

but a fool. The word field in a sentence about black history

makes me think of slavery times. Of sharecropper times. Of convict

lease programs—which really never stopped. These are the only legacies

many people can summon up where black folks are involved.

_Camille T. Dungy is the author of_ Trophic Cascade _(Wesleyan University Press, 2017) and three other collections of poetry. Her debut essay collection,_ Guidebook to Relative Strangers: Journeys into Race, Motherhood, and History _(W. W. Norton), will be published in June._