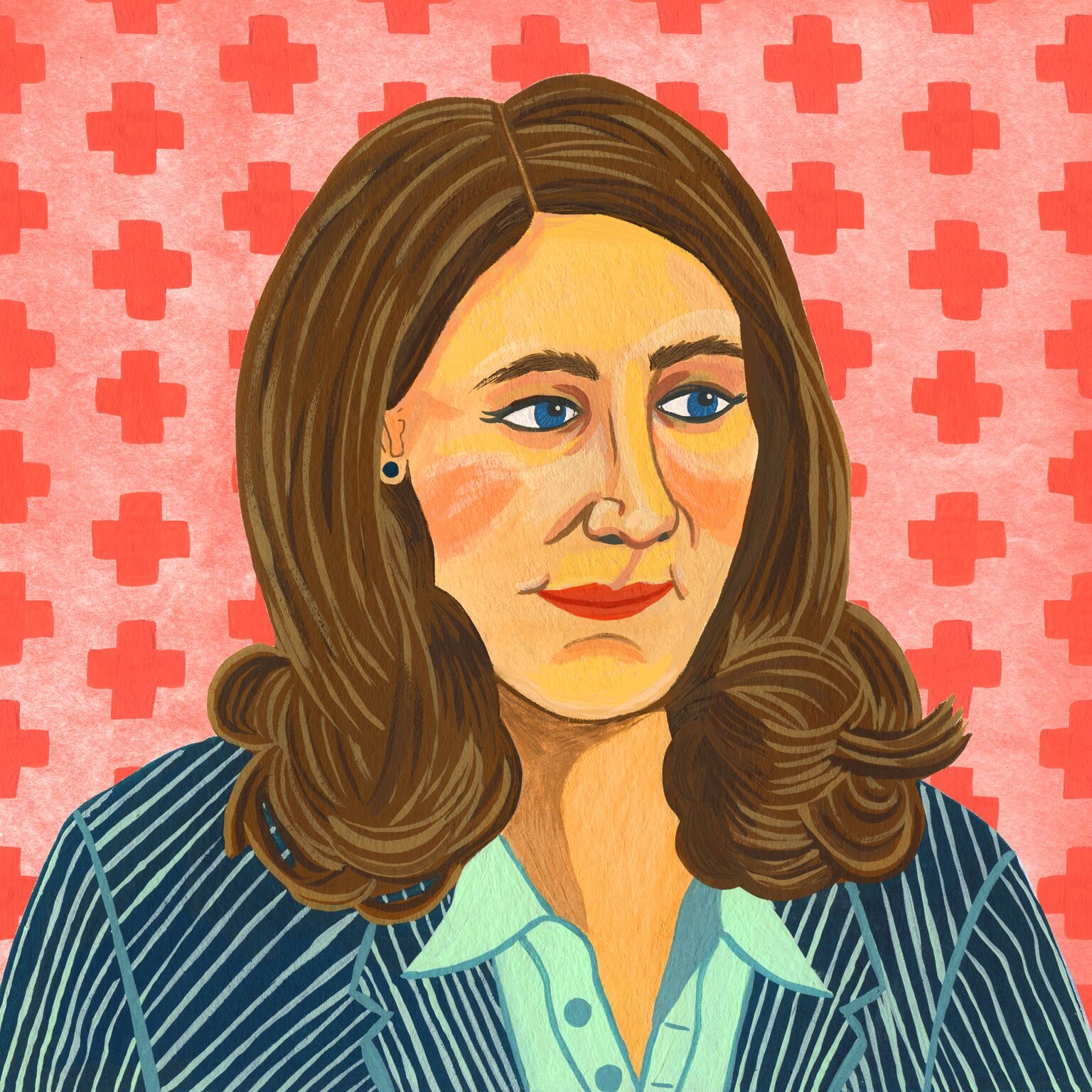 The second time I interviewed Sylvia Mathews Burwell, secretary of Health and Human Services, I realized she had a good sense of humor. The first time had been all business — open-enrollment season had just kicked off and Burwell wanted to tout the achievements of the Affordable Care Act. I wanted to delve into those, but wanted to probe her, too, on why it seems that its costs are on the rise, that the choices it offers are fewer, that it hasn’t quite lived up to all of our low-premium-laced expectations. It was a good conversation — informative, critical, honest.

But it wasn’t until two weeks later that I heard her crack a joke. Between our conversations, America had elected a businessman who’d never held public office and ran on discrimination and hate and a definitive promise to repeal and replace the law that Burwell has advocated for since 2014. The heartbreak was so deep, the shock so fresh and terrible — what else could we do? We laughed. Aptly, hospital humor. And then Burwell led us back on track. Because millions of people will have to live with the choices the new administration makes about Obama’s health-care law. Because people, even people who voted for Donald Trump, (1). Because Representative Tom Price, whom the president-elect has tapped to fill Burwell’s seat in the Cabinet, has spent more (2). And now he’ll have more power than ever to do it.

But Burwell, who was president of the Walmart Foundation, worked at the Bill and Melinda Gates Foundation, served in the Clinton administration, and was a Rhodes scholar after she graduated from Harvard, hasn’t given up yet. She takes her cues from her constituents. Within three days of the election, more than 300,000 people had signed up for 2017 health-care coverage. Within the first 12 days of open enrollment, over a million people selected insurance plans. The demand, Burwell insists, is there. How Trump decides to meet it, whether he will rejigger the law so that women have to pay more than men for the same health care, so that people with preexisting conditions can be turned away by insurance companies, is anyone’s guess.

When I reread our initial interview in our new upside-down universe, I expected to find at least some sense of false assurance, a few mistaken assumptions about a warmly lit, woman-led future that I’d need to cut out. But there were none. No wonder: Burwell has watched Congress try to repeal the Affordable Care Act more than 60 times since the Supreme Court upheld the law in 2012. For over two years, she’s needed to make a case for it — to insurers, to hospitals, to Americans, to recalcitrant Republicans. She never presumes. Burwell is an avowed optimist, but a clear-eyed realist all the same: She never believed the battle was over. Now more than ever, she’s ready to fight like hell.

**Mattie Kahn:** Given that we’re in open-enrollment season, give me the hard sell: What progress can you point to that proves that not only is the Affordable Care Act working, but it’s working better than we expected?

**Sylvia Mathews Burwell:** First, let’s start with the fact that there are 20 million fewer uninsured in our nation, and that those that are in the marketplace, we know that their customer satisfaction is the same as those that have insurance provided by their jobs.

**MK:** What steps are you taking to address that?

**SMB:** Some of what the president has proposed to work on it include, one, increasing subsidies so there’s a broader reach of the subsidies that are out there. Two is the idea of having a public option where there’s not a lot of competition. That could put downward pressure on price and provide people with an alternative. Three is that we need to do more about high-cost drugs. That would help the marketplace, help Medicare, help Medicaid, and help the consumer, who is paying a portion of the costs of these drugs.

**MK:** Because of the ACA, women can’t be charged more than men for insurance on the basis of their gender. But do you think sexism still works against women in terms of how they receive care?

**SMB:** One of the more important achievements that’s probably not focused on and that has occurred in 2016 is the implementation of a portion of the Affordable Care Act called 1557. When I got here, it had been worked on for five years. It’s the language to implement the law that Congress gave us to protect against discrimination in health care. Discrimination does exist. It exists for women. It exists for transgender people. It exists in a number of places, and so I think that’s a critical step forward.

What we need to do more of, certainly at HHS because it’s large and because we fund so much research, is make sure that research is done on women. Many conditions are researched on men, and they may be different for women. That’s a place where I think continued progress is important.

**MK:** To do what you do, you have to be both a total pragmatist and probably somewhat of an idealist to believe that progress is really possible. How do you strike the balance?

**SMB:** It’s true. I’m just an optimist at heart. I’m optimistic about our country. I’m optimistic that progress can be made. It helps that I get to meet some of the twenty million people who have been helped. I have met a woman who, before the Affordable Care Act, had breast cancer and delayed her chemotherapy because she had hit her annual limit. I met a woman who told me, “I’ll tell you how you treat MS: You get sick enough that an emergency room will take you.” That’s how she treated the disease before she got coverage on the Affordable Care Act. This was a working woman with four children.

**Part II: After the Election**

**MK:** Oh God. OK. Trump has repeatedly promised to “repeal and replace” the Affordable Care Act. And yet we know that millions of people who voted for _him_ depend on it. Given that, what’s the best- and worst-case scenario for the ACA?

**SMB:** There are a number of unknowns and uncertainties, so what the team and I are doing is focusing on what we do know. What we do know is that we’re still in this period of open enrollment, that the Affordable Care Act is the law of the land, and that a million people made plan selections in the first two weeks of November. That’s what we’re focused on. We have seen insurers all say that these plans will be good for 2017. We have seen even some Republicans say that there will not be an abrupt shift. We’re focused on the very specific task ahead, which is getting people the coverage they need.

So I think we don’t have a sense of worst and best. As people move from the rhetoric to the reality, from the slogan to how these changes will actually affect people’s lives, the conversation will become more real.

**MK:** Do you have a message for the people in the Trump administration who will be making these decisions?

**SMB:** Folks should think hard about what it is they’re trying to do and want to do. I’m going to assume the best — that both sides and most everyone in this country can agree that we want is more affordability, quality, and access. Those are the standards that Americans should use to judge what happens in Washington, DC.

When I say access, that’s the number of people who are insured. When I say affordability, that means, what does it cost for Americans to have health care, to have insurance? What is the taxpayer paying? And when we talk about quality, it’s extremely important that the American people know how these decisions will affect their coverage. Does it mean they’ll no longer have limits on out-of-pocket expenses? Does it mean they’ll have annual limits ? Does it mean women will need to pay for contraception? And overall, how are those changes going to impact the deficit?

**MK:** And to the people who are terrified that they’re going to lose their health care — do you have a message for them?

**SMB:** First, I would say go get it. It’s open enrollment — go get that coverage. Now’s the time. Go get covered for 2017. Talk to friends who don’t have health insurance, and make sure they know they can go to HealthCare.gov or call 1-800-318-2596 and see for themselves if there’s coverage that would be affordable for them. A huge percentage of folks can find plans for $75 or less.

Second, to young women in particular, I want to say your stories matter. Use social media. Share your stories. If you’re on your parents’ plan or you care about the cost of your contraception or you have a preexisting condition, share that. As I said, this conversation needs to move from rhetoric to reality. The Affordable Care Act affects millions of people’s lives. So voice that. (3), an online platform that lets consumers share stories of how the ACA has changed their lives.]

**MK:** Handing over the keys to all of your work to _this_ administration, given what the president-elect has said about health care — is it hard?

**SMB:** We stay the course. We stand ready for their team to come to help them have the smoothest possible transition. That is what our country is about. We will support that and do that. And at the same time, we’ll complete the work we’ve set out to do for the American people. That’s our job.