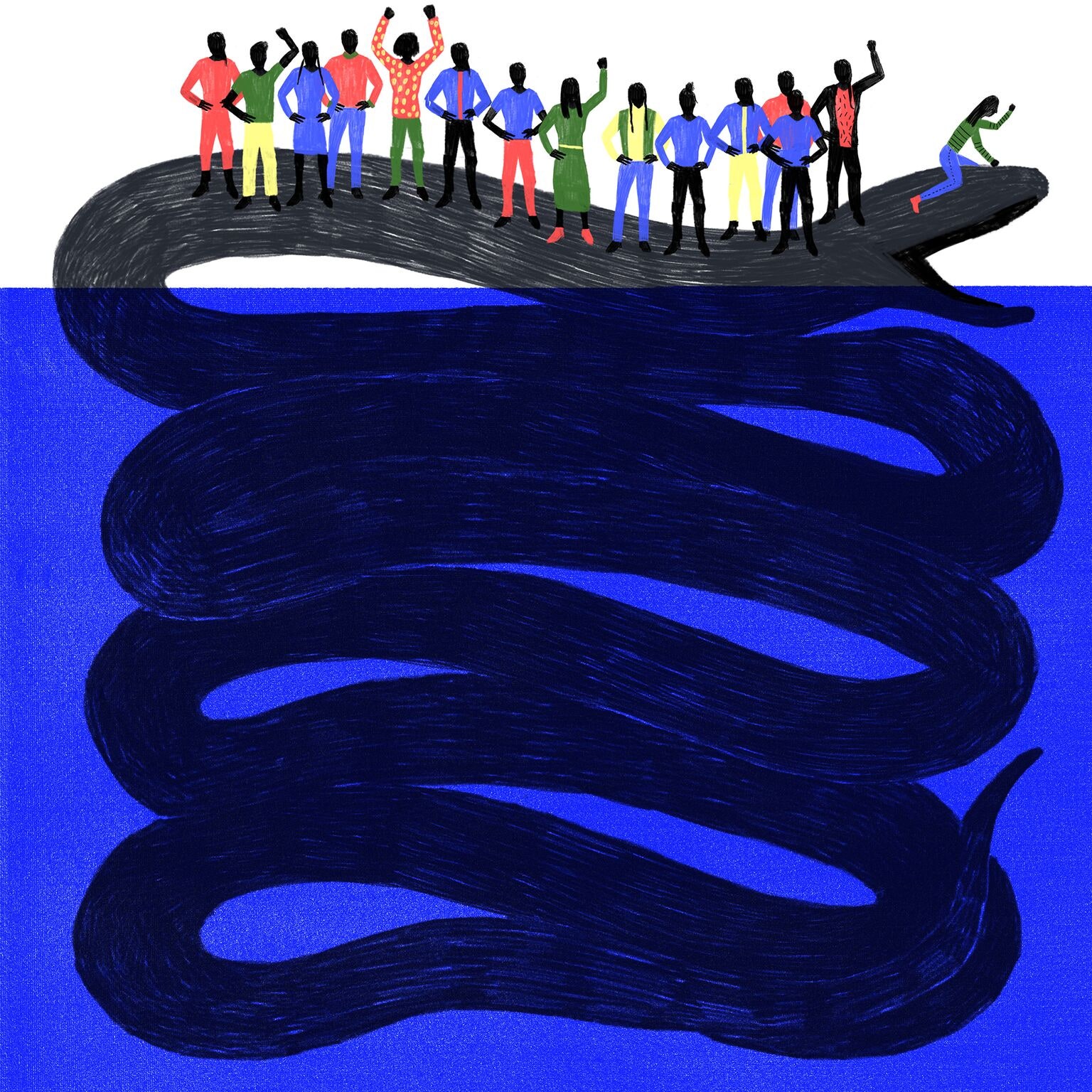 Eryn Wise, a 26-year-old member of the Jicarilla Apache and Laguna tribes, has been living at the Sacred Stone Camp in North Dakota since August. Alongside thousands of others, she’s been praying to stop the $3.8 billion Dakota Access Pipeline; a 1,200-mile pipe that was supposed to enter the Missouri River at Lake Oahe, where it would tear through the Standing Rock Sioux Tribe’s sacred grounds and threaten their water supply.

This week, the prayers of those at Standing Rock were answered. In a statement on Sunday, the US Army Corps of Engineers announced that it would be denying the easement needed to complete the job. It’s a huge win for indigenous people, but one that’s come with a steep cost.

From August to December, Wise watched the camp turn from a peaceful place of prayer to a virtual war zone. In effort to push the unarmed masses off the land, law enforcement turned to violence, thrusting water grenades and rubber bullets into crowds of unarmed demonstrators. When we spoke on the phone, three days before the announcement, Wise’s voice was raspy from a cold — the product of a blizzard that had torn through the camp in the days before.

But the defiant leader, who left her job teaching kids in Phoenix, Arizona, to move to North Dakota, wouldn’t let that stop her. As communications director for the International Indigenous Youth Council, she’s fought tirelessly to amplify the voice of her people — a group history has repeatedly silenced. “We don’t ever hear the narrative of indigenous people,” she tells me. “We hear people writing our narratives for us.”

Not this time. After months of being sprayed with tear gas, pummeled by rubber bullets, and doused in mace, the Native Americans at Standing Rock — hailing from 378 different tribes — sang “Mni wiconi!” (“Water is life”) not as a rallying cry this week but as a victory song. In the days leading up to the win, Wise shed light on what it’s like to be a Native American youth in the middle of making history, from caring for her little sister’s broken wrist to navigating mixed feelings about the involvement of celebrities.

**Abby Haglage:** You have been at Sacred Stone Camp since August. What has “home” looked like?

**Eryn Wise:** This summer I lived with about twenty youth-council members in a canvas tent and some tipis. Now that it’s colder, I live in a yurt with about twelve people. We do everything together — we eat together, we sleep together, we pile into cars to go take showers together, we walk around the camps together.

**AH:** How many people have been at the camp overall?

**AH:** All along people have been referring to this as a protest, but you’ve mentioned the desire to be recognized as “protectors” not “protesters.” Why do you feel strongly about that distinction?

**EW:** It is a protection, not a protest. Everything that we do is in protection of the land. doesn’t use the word _protectors_ because they think that the mainstream audience won’t understand it … but this is their time to grasp this teaching opportunity and share with mainstream audiences what it is that we want to be called. We’re redefining history, you know? I don’t think that call their wars protests. They feel like they’re doing a job — so do we.

**AH:** That makes sense. So, it seems like there has been a large law-enforcement presence throughout this movement, but it seems increasingly violent. Is this something you’ve seen firsthand?

**EW:** I’ve witnessed a lot of it. My sister had her wrist broken by police officers on the 22nd of October. Then the same police officers re-broke her wrist on the 27th of October, on purpose. My little brother had a tear-gas canister shot off in his face. He had bruising on his nose and his face from where they shot it at point-blank range. Another member of our youth council got shot with a flash grenade that caused him to have a seizure. Almost everyone’s been maced; everyone’s been teargassed.

**AH:** Wow. But law enforcement has defended the use of violent force, saying that they were responding to attacks on police barricades. Is that accurate?

**EW:** No — that’s funny though! On October 27, the Morton County Police took and chained them together to block the road so that it takes us an extra 30 minutes to go around. Everyone was like, “What happens if there’s a medical emergency?” That could make or break a situation, so we tried to pull those cars off the road. That was the day that they used water cannons.

**AH:** Do they try to communicate with you?

**AH:** That sounds ridiculous, and frustrating. I think a lot of people seeing that kind of thing nationwide have been inspired to help — including a good number of celebrities. Do you think that has helped your cause or hurt it?

**EW:** I’m conflicted. I think a lot of the people that show up are good intentioned and they aim to be here to work and to assist us. To take a seat at our table. realize that it’s an indigenous movement and that they are here as allies and as nothing more. Then there are people who show up and feel like earned the right to wear red face or earned the right to put a feather in hair. going to serve turkey to the Indians on Thanksgiving and apologize for white people … I feel like that detracts a lot from what it is we’re trying to do. This is an indigenous movement, and we appreciate our allies, but a lot of people show up, I think, with their own agendas and their Instagrams. Ally-ship is appreciated, you know, but we don’t need people to come and save us. We’re saving ourselves.

Like I said, I’m conflicted, because there are a lot of people that show up who are _really_ helpful. But there are others who show up and treat Standing Rock like a festival or this weird photo op, like, “Yeah, I once walked among the Indians and was practically one of them.” At the end of this, you don’t get an Indian name. You don’t get a headdress. Everyone’s hoping to earn their stripes, but it’s our culture. It’s not just a Boy Scout program that you can go through and earn your badge at the end of the trip.

**AH:** One person whose involvement you’ve been vocally supportive of during this movement is Bernie Sanders. What did he do differently?

**EW:** I think he’s probably the most humble about it. When he talks, he says, “Indigenous rights are the rights of everyone.” I appreciate that. Often people only see us as an antiquated version of ourselves. This characterization of who we are, you know? The Hollywood Indian, or _Dances With Wolves,_ or a mascot. People don’t really _see_ us as living, breathing human beings, when they do, it’s appreciated. Honestly, the only other people that I can think of that haven’t really used this for their personal advantage are people of color, but that’s just because we’ve all dealt with the same shit for so long. If we don’t stand together, who’s going to defend us? We have to defend and protect each other.

**AH:** People of color understand your experience in a way white people can’t, is that what you’re saying?

**EW:** Yeah. I mean, how are you going to say to a white person, “I’m scared to walk outside because I might get shot today?” That’s not going to make as much sense to somebody that’s white as it is to somebody who’s black.

**AB:** Right. You’ve endured an incredible amount thus far, and pushed through so many setbacks. Do you ever feel tempted to give up?

**EW:** Yeah, especially right now when I’m sick and I want to lay in my bed. be able to go to the store without having people follow me, or get gas without having cops come harass me. days like this I definitely do. Then I think about the fact that my foremothers, my ancestors, they survived so much worse just for the opportunity for me to stand here. My very existence is their act of resistance. I am their greatest prayer. Me standing here, talking to you, telling people we know what’s up and we see through you and we see all of you. We see your actions and your inactions. The days when I’m washing mace out of my little sister’s hair because she got maced on the front lines — after all this time, why would I give up now? There’s no way you can stop what you’ve started.

**AH:** You truly believe in what you’re fighting for.

**EW:** It is such a necessary fight. It’s clean water, you know? I couldn’t just give up and go home and take a bath and not think about where that water came from.

**AH:** How much do you think being a young member of this group has influenced your thinking?

**EW:** The youth started this — young people ran a relay to Washington, DC, to raise awareness. They were the ones that kind of kick-started everything off. As the International Indigenous Youth Council, a lot of people come to us for assistance, which is crazy because all of us are just trying to figure it out like everybody else. Sometimes I feel bad because I’m like, “You still should be a kid. You should still be having the opportunity to mess around and go to college and fall in love like a million times.” Right now, all of them are just growing up really, really fast because they have to. It’s not anything different than our ancestors had to do, but it still sucks.

**AH:** After so many months of resistance, the announcement that construction is being halted on the pipeline is a major victory — but it’s far from the end. What can people do to help in the meantime?

**EW:** Well, this entire movement began in prayer. It was a prayer that was prayed long before we even knew that we were going to be in Standing Rock. We had our ancestors that knew that we were going to be standing there and they were praying that we would know what to do when the time came. I just tell people to pray in whatever way they know how, whatever language, to whatever god that they believe in, just to pray. The power of prayer has kept us alive this whole time.

(1) _is a writer living in Brooklyn. Her work has appeared in_ Newsweek, Glamour, Marie Claire, _and the Daily Beast._