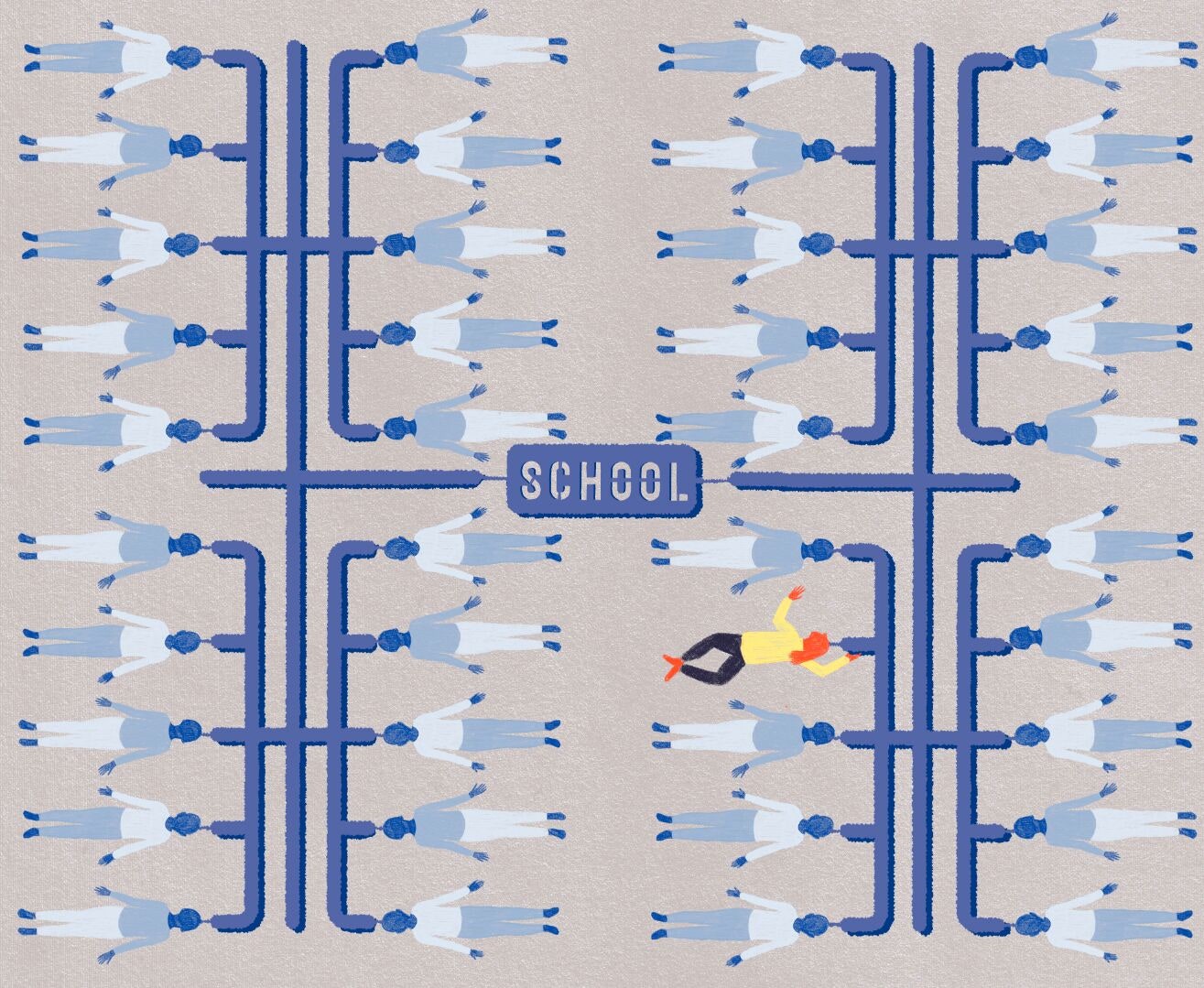 I lost my first daughter when I was 21. I was a college dropout living in a small town, barely a woman yet — barely a person, even — and certainly not making informed decisions about my future, my capacity for motherhood, or who I could be. Still, when I got pregnant unexpectedly, I couldn’t bring myself to let the baby go. Five months later, she made the decision for me: a mid-term miscarriage, the fetus old enough that this was unforeseen, old enough that I had to be put under for surgery to excavate her from my body. Old enough that they knew she was a she.

Shaken, I spent the next 15 years in a life-on-fire montage. I put myself through college, I traveled, I moved to New York City. I fell in and out of love in reckless and quiet ways; drank too much; stayed up too late; made deep, wild connections with dangerous people and with wonderful ones too; worked diligently for professional success beyond what I’d dreamed. Eventually I met a good man, a kind man, an equal, a man who made me laugh. We rented an apartment in Brooklyn. We adopted two cats and made dinner and made friends and made a life and one perfect fall afternoon got married in City Hall. I wore a short white dress. Later, at the Rainbow Room, we danced to Etta James. Ten months later, I got pregnant for the second time.

It seems embarrassing to say this, but I desperately wanted a girl. Maybe it was because I never filled the hollow left by that early loss; maybe because in the ensuing years I had learned to love and appreciate women with a ferocity that overwhelmed and humbled me; maybe because I felt I’d become, despite my lingering foibles, a pretty good woman myself. But definitely because I felt I’d lived enough and understood how to raise a girl, to teach her to love her body, to be tenacious and curious, to believe she could be and do anything she wanted, even if it turned out she was a spiky, intense, hyper-sensitive outlier like me.

After a year spent agonizing over elementary schools (a specific hell of modern parenthood, particularly in big cities), we moved to a neighborhood with a good public option, one with a diverse student body, a decent academic record, an organic garden with chickens, and a strong sense of community. It’s a decision I still feel confident in, despite what I’m about to explain.

On her second day of kindergarten, in an email as formal as it was vague, C’s teacher requested a meeting to discuss “behavior.” He’d signed it “attentively.” It was all very polite, but anyone with an ounce of public-school-doled discipline could see we were in some shit.

Apparently on the first day of class, instead of sitting with the group, our daughter walked to the back of the room, shook off her shoes, and lay down, immovable, a kind of passive-resistance protest to conditions she did not deem favorable. On the second day, she tried to set the class tarantula free. By the time we met with the teacher, on day four, she’d touched the class fish, howled like a wolf when called upon, and, once, to her fastidious teacher’s great alarm, stood eating yogurt out of the container with her hands while humming “Frère Jacques” on repeat. This behavior, the teacher explained calmly, could not be tolerated. Our daughter would have to get in line.

Like me, like her father, C is a weirdo. She’s not autistic, OCD, ADD, or any of the D’s. She’s just different. She argues with teachers over precise syntax, she growls and meows and howls when she’s pissed or bored. She’s noticeably messy, whip-smart, hates performing at school, hates gym, gets in trouble for her lack of compliance, and spends a lot of time in the principal’s office, a space she enjoys because the couch design is nice. She reads voraciously, loves puns, and initiates conversation with other kids by bringing up the *Titanic*. She wants to be a paleontologist. She knows the bio of Billie Jean King. She’s creative and odd and awkward, and I love and relate to her in a way that takes my breath away.

> She’s creative and odd and awkward, and I love and relate to her in a way that takes my breath away.​

But like most idiosyncratic humans, she stands out, and not always in a good way. And this is only exacerbated by the fact that she’s a girl.

In 2016, these are still culturally held truths: a girl is supposed to try to fit in. A girl is supposed to want to be liked. A girl, unlike a boy, who can simply “be a boy,” is supposed to care about what grown-ups think. When a girl is not that way, she is pathologized. She is labeled. We have models for rough-and-tumble, too-rambunctious boy outliers. We understand Dennis the Menace-like boy menaces. We delight in tiny male Wes Andersons, chockablock with eccentricities. But when a girl is this way, she is *weird*, her behavior is a *concern*, her very being is a problem. To be clear, I understand that C’s behavior would be problematic for a boy as well. But I have to wonder if the framing of it and the discussion around it would have been quite as extreme if C had been a Charles.

Over the next few months, the troubles at school continued. C could not, would not, get in line, and despite interventions at home — no screens, a strict sleep schedule, consistent discipline, no sugar, positive-reinforcement charts, family therapy, all the things in all the books we read and could realistically try — she continued to not give enough fucks.

Behaviorists were brought in, on both sides. After observing C, one of them reported: “I watched her break her pencil aggressively — like a boy would!” Descriptive words like *willful*, *feisty*, *spirited*, and *defiant* were bandied about with condescension. In our first “student success” meeting with a team of administrators, C’s teacher indicated her size (she’s tall for her age) and her strength to illustrate that she was difficult to physically control. I cannot fathom this being part of a discussion about a mentally healthy boy of the same age and size.

Later that month, in a message sent only to me with the all-caps subject line USING WORDS, the teacher outlined how C had grabbed another student that day, a boy, by his shirt and by his arm. The other parents had been notified, he said; aggressive behavior was not OK. What he failed to mention was that the boy had stolen her homework and had been teasing her for weeks. In the bottom of the email, the teacher attached a series of links on “parenting tips.”

I can feel myself getting angry here; I’m still tender and raw. I am probably too close to this situation to write about it. When my daughter tells me she feels like a “bad kid,” when she tells me that she has no friends and feels alone, I soothe her and then walk away and quietly burst into tears. Her trauma triggers my own, her experience shoots me back to my own childhood of weirdness, loneliness, otherness. I am not perfect, and I cannot possibly be objective. But I’ve been a female long enough to know when I’m being patronized. And fuck that guy and his parenting tips.

> I am not perfect, and I cannot possibly be objective. But I’ve been a female long enough to know when I’m being patronized.​

I do not think my daughter is a perfect cherub, nor do I think she’s easy — she’s not. In our enthusiasm to embrace her individuality and build her self-esteem, we have failed to teach C to be in the world, to follow the rules she already senses are arbitrary and listen to adults even if those adults are assholes. As a mom, I demand and receive respect, but I’m still afraid to crush her independent, ass-kicking spirit. I don’t want her to think anything is wrong with who she is, like I did. I don’t want her to compartmentalize her identity and try to pass as “normal.” These are the nuances of parenting no one warns you about. I am working on it.

Still, there has to be space for girls like C, for weirdos. We have to allow for not-conventionally-likable, outside-the-norm girls — and women. We are currently failing at this.

Watch the next time you are on a playground or in a school: no matter how many studies show us that gender roles are learned and not innate, we’re still expecting and rewarding girls for being pretty and neat and soft and sweet and polite. For looking like a little princess. For smelling nice. For fixing their hair. When they are messy and defiant like C, when they advocate for themselves and they protect their bodies — sometimes aggressively — they exist outside a set of socially sanctioned boundaries we’re still living within. We say we want our daughters to grow up to be empowered, strong, unique women. How are we not consistently embracing these qualities in them as girls?

Earlier this year, after months of school meetings, I realized my own gender programming was part of the problem. While my husband was impervious to the teacher’s criticisms, sitting with his arms crossed and rolling his eyes, I saw an old pattern arise within me: I was accommodating, over-apologetic on our daughter’s behalf, afraid of being *those weirdos with the weird kid*, hated feeling like we were in trouble all the time. If I wanted the situation to change, I had to change.

A few weeks ago, when we were called into the office again, I decided to try a new tack. I listened respectfully to the teacher’s complaints: C doesn’t pay attention (but she’s learning everything anyway), she draws on the desks, she reads books when she’s supposed to be participating, she won’t dance in the school show. And then, mustering all my power, power I knew I’d earned and I knew my daughter deserved, I said: “This is who my daughter is. She’s a different kind of learner, and you are an educator. How can you accommodate her?”

Excuses were made. A more supportive strategy was put into place.

We haven’t been called since.

*Jennifer Romolini is the former editor-in-chief of* *HelloGiggles* *and author of the upcoming career memoir* Weird in a World That’s Not.